Lukasz “Dr. Luke” Gottwald and his former protege, Kesha, have been embroiled in legal battles since 2014, when the latter accused the former of physical and sexual abuse. Currently, Dr. Luke is pursuing a defamation suit against the singer, one that’s also roped in Lady Gaga and Katy Perry, whom Kesha alleged Dr. Luke had also raped. Now, new deposition excerpts unsealed as part of the suit reveal Perry denied the allegations in court, testifying that she was never assaulted or engaged in a romantic relationship with Dr. Luke.

Meanwhile, in a separate deposition partially released on Monday, Lady Gaga testified that it wasn’t Kesha who told her about the Katy Perry allegation, but rather Interscope CEO John Janick. The testimony slightly contradicts the claim in Dr. Luke’s suit, with Gaga saying that she was with Kesha when Janick made the allegation, rather than Kesha texting her Janick’s secondhand account.

Other documents appear to support Dr. Luke’s defamation case. A Sunshine Sachs press plan dated October 10th, 2014 reveals that the publicity firm sought to “[incite] a deluge of negative media attention and public pressure” on Dr. Luke in an effort to extricate Kesha from the pair’s contracted relationship. Later, the document discusses disclosing the lawsuit to TMZ while also manipulating the press to “ensure our story is being told as completely and as favorably for Client K [Kesha] as possible.”

Dr. Luke’s team also shared e-mails allegedly exchanged between Kesha’s managers, Jack Rovner and Ken Levitan, and veteran music executive Irving Azoff. The e-mails find the trio discussing their intentions in regards to defamation, with Rovner saying they’d “battle [Gottwald] in the press” and “take down his business.” Azoff, meanwhile, promises he “will ruin him.” 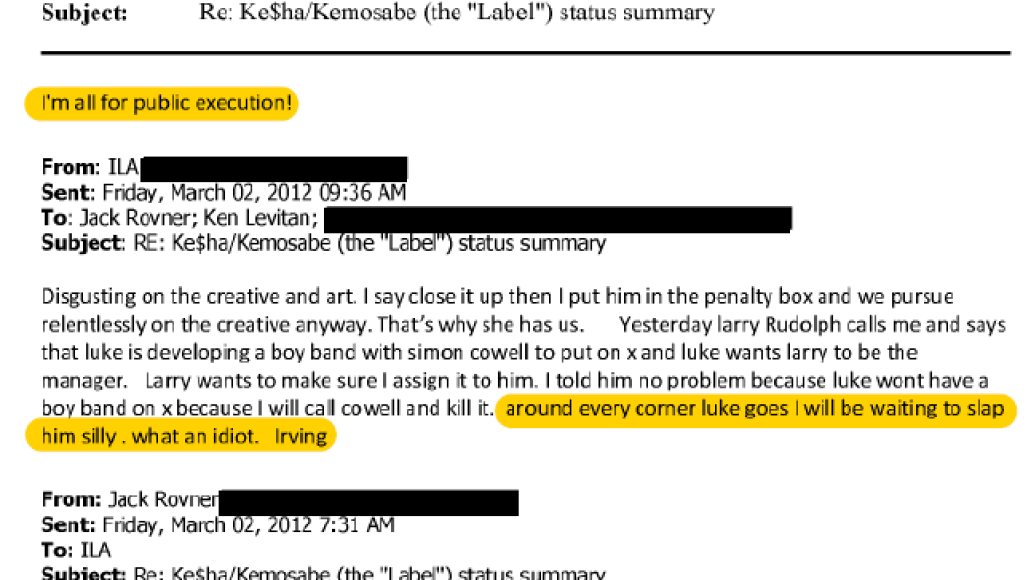 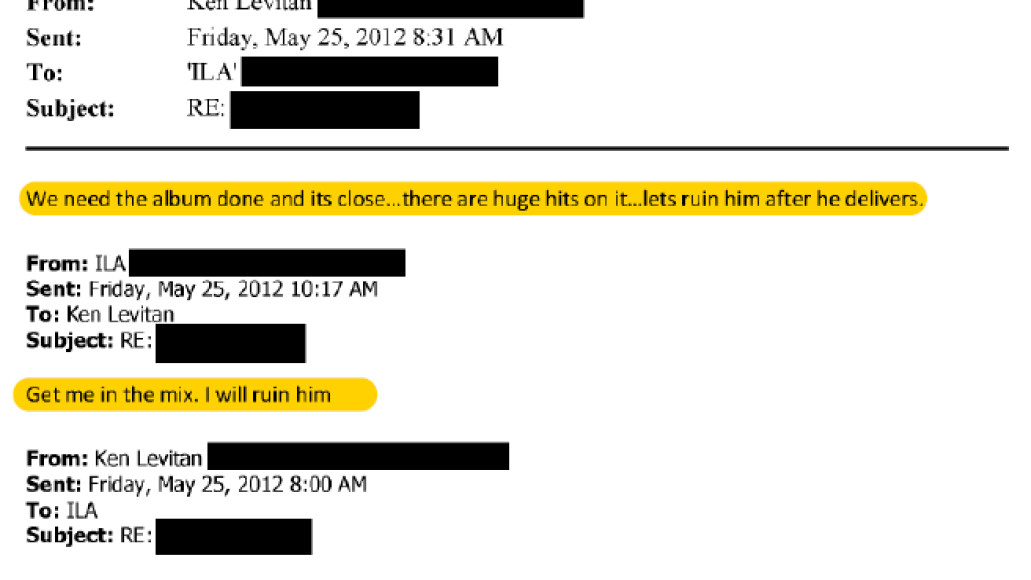 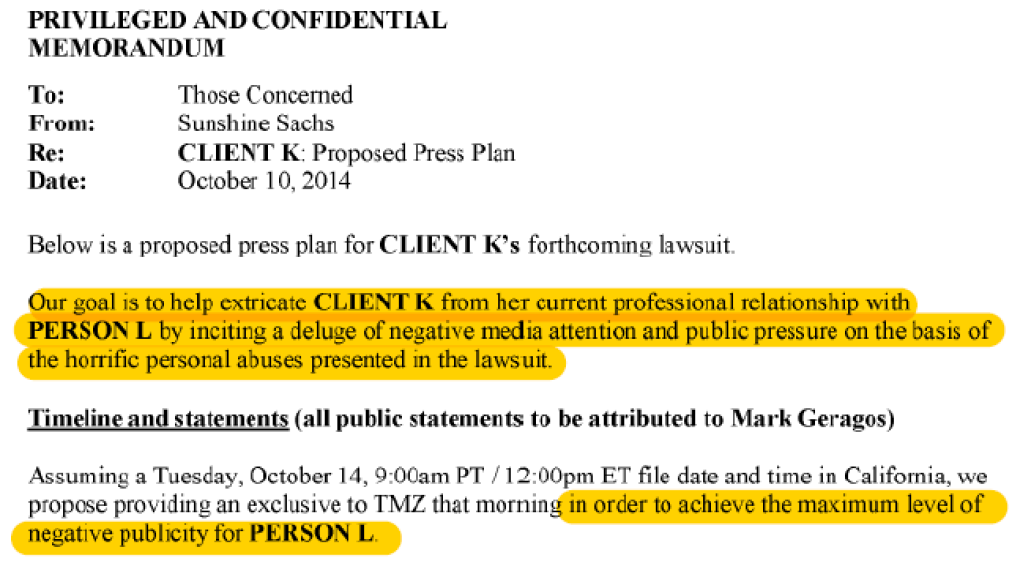 Dr. Luke’s attorneys also offered an account of the alleged incident from the producer’s perspective:

“Kesha and Dr. Luke each attended a birthday party for Nicky Hilton at a nightclub in Hollywood, followed by an after-party at Paris Hilton’s home.

Kesha admits she voluntarily had at least four drinks while partying. Because she drank too much, she got sick, and threw up in Paris Hilton’s closet. Kesha was kicked out of the after-party because of her behavior. Dr. Luke was asked to help bring Kesha out of the party. As an act of kindness and to help Kesha, since Kesha had just vomited and was intoxicated, he escorted her out and offered to allow her to sleep in his hotel suite, which was only a few blocks away. Kesha slept on the bed in the hotel suite, while Dr. Luke separately slept on the couch. Dr. Luke testified, under oath and in great detail, that he did not have any sexual or physical contact with Kesha.

In her bogus Complaint against Dr. Luke, Kesha falsely claimed that Dr. Luke gave her a so-called “sober pill” supposedly causing her to ‘black-out’. She also claimed she told her mother about allegedly being drugged right away, in 2005. Her mother, however, testified Kesha did not tell her about any supposed ‘sober pills’ until 2013/2014. That was when Kesha had begun plotting the press plan and lawsuit and threatening Dr. Luke to go public with her false rape allegations. Dr. Luke testified that he did not give Kesha any kind of drug that night.

The next day, Dr. Luke woke up on the couch and left the hotel suite, while Kesha kept sleeping on the bed. After waking up, Kesha spent hours in the hotel suite and even ordered room service.

Other critical documents and testimony remain under seal at Kesha’s insistence. When released, they will further reveal the fiction that Kesha created.”

“The false narrative Kesha created about being raped became widely accepted, damaging Dr. Luke’s reputation irreparably. There is nothing worse than abuse and sexual assault. Dr. Luke supports any woman or man who seeks to address sexual abuse in the legal system. That is not what happened here. It is also horrendous to falsely accuse someone of a heinous act.”

In response, lawyers for Kesha issued a lengthy statement of their own, which included Kesha’s own account of the evening in question:

“Kesha’s experience as a victim of abuse, as reflected in the evidence that was unsealed earlier today, will be all-too-familiar to many women around the country.

Kesha testified that on October 5, 2005, a few days after she signed an exclusive contract with Dr. Luke’s music-production company, a then-32-year-old Dr. Luke attended a nightclub party in Los Angeles with an 18-year-old Kesha. Kesha testified that when she told Dr. Luke that she felt nauseous after two glasses of champagne, Kesha testified that he gave her a ‘sober pill’ that Kesha took because she thought it would make her feel better. Kesha’s and Dr. Luke’s testimony show that after Kesha vomited at an after-party, Dr. Luke took Kesha to his hotel room, where she woke up the next morning alone, naked, vomiting, and painfully sore like she had sex without lubrication. Sworn testimony and contemporaneous phone records show that Kesha immediately reported the incident to her close friend and mother (with frantic phone calls from her mother trying to find her), and later sought professional help from medical providers. Kesha’s decision to not report to law enforcement is unfortunately very common.

Notably, Kesha is not alone in her inability to work with Dr. Luke. Kelly Clarkson testified that Dr. Luke can be a ‘bully and demeaning,’ with her record label acknowledging internally that ‘almost every female [at the label] doesn’t like working with’ him. Similarly, Avril Lavigne and Pink have submitted sworn statements that there are reasons other than Kesha’s abuse allegations why they haven’t worked with Dr. Luke in recent years…

Dr. Luke’s litigation technique has been straight out of the blame-the-victim playbook, meant to humiliate and intimidate Kesha into issuing a retraction of her statements. Kesha has by no means claimed to have any unbiased data of any alleged assault of Katy Perry (which Ms. Perry has denied in a later deposition).”

Kesha is facing a $50 million defamation lawsuit from Dr. Luke. Thus far, her legal efforts to end her contract with Dr. Luke have failed, as the court denied both Kesha’s request for an injunction that would have allowed her to sign with a new record label, as well as Kesha’s counter lawsuit against Dr. Luke. In the latter case, an appeals determined Kesha’s request was “devoid of merit.”