Lana Del Rey faced criticism from members of the BDS Movement when she was booked for Israel’s inaugural Meteor Festival earlier this month. Initially, the singer staunchly defended her decision to join the lineup, stating that her intention to perform was “not a political statement or a commitment to the politics.” She made those statements just 11 days ago, but now, one week from the start of Meteor, she’s backtracked and announced she’s canceled her appearance.

In her original remarks, Del Rey said she intended the show “to be done w a loving energy w a thematic emphasis on peace.” Now it seems she won’t be delivering that message until she can share it with both sides of the Israeli-Palestinian divide.

“It’s important to me to perform in both Palestine and Israel and treat all my fans equally,” her new Twitter statement begins. “Unfortunately it hasn’t been possible to line up both visits with such short notice and therefore I’m postponing my appearance at the Meteor Festival until a time when I can schedule visits for both my Israeli and Palestinian fans, as well as hopefully other countries in the region.”

The last-minute change of heart obviously has not sat well with Meteor Festival, who issued a statement on their website taking a shot a Del Rey’s handling of this whole thing. “Just got the word that Lana will be a no-show at Meteor. We do appreciate her for choosing meteor to help her score some press attention,” read the festival’s barbed statement. 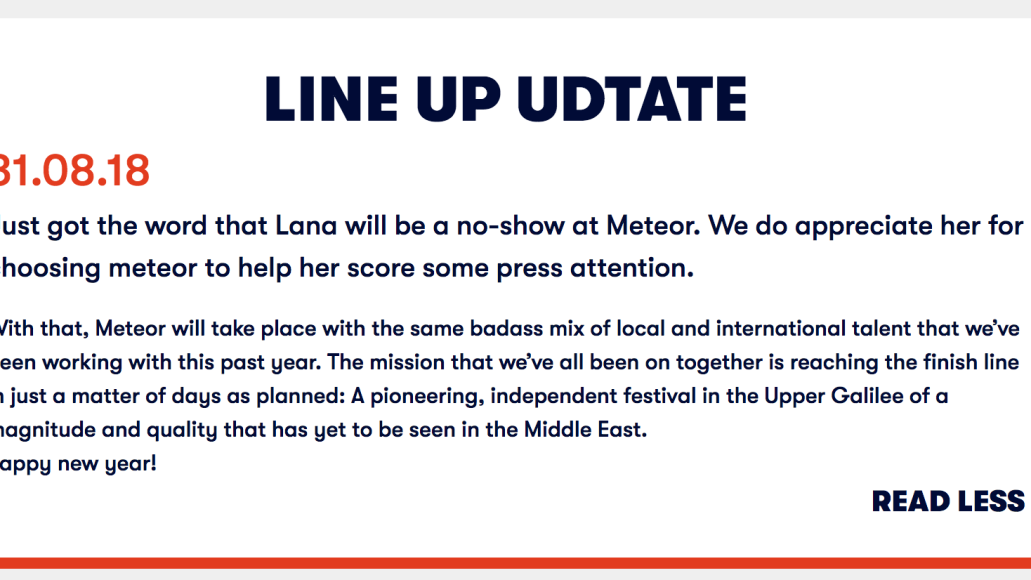 Artistic leaders of the BDS Movement such as Roger Waters, Brian Eno, Kathleen Hanna, Mark Ruffalo, Angela Davis, and others have been pressuring musicians to cancel scheduled concerts in Israel in protest of the country’s treatment of Palestine. Some, such as Lorde, have canceled their shows, while others such as Nick Cave and Radiohead have resisted the calls of boycott.

We’ll see if this latest move is Del Rey bowing to those pressures or if she’ll really reschedule the gig along with a Palestinian show.