Long before it became a running joke for every Conan appearance Paul Rudd has ever made, 1988’s MAC and Me was already infamous — a blatant, soulless, calculated rip-off of E.T. the Extra-Terrestrial with a hefty glob of product placement slathered across every frame like so much barbecue sauce over a McRib. It graced theaters for a mere two weeks and grossed only $6 million; however, it did win two Razzies for Worst New Star (Ronald McDonald, of course) and Worst Director.

Thirty years later, MAC and Me has faded into obscurity as a cult curiosity, a cynical feature-length commercial for McDonald’s and Coca-Cola that represents the most egregious example of that particular commercial impulse. But the road to MAC and Me is paved with more than Big Mac wrappers and creative bankruptcy; it was just the most blatant instance of a trend toward children’s programming that focused less on education and storytelling and far more on getting kids hooked on brands and products.

To understand how MAC and Me came to Mac-and-be, we must go back to 1946 and the publication of the Federal Communications Commission (FCC)’s first Blue Book – a document that limited commercial airtime to certain public service standards, including eliminating “excess advertising.” Through the ‘50s, ‘60s, and ‘70s, advertisers worked diligently to circumvent the guidelines of the Blue Book: in 1963, for instance, the FCC lost a court case that said they were no longer able to enforce how many commercials were featured in children’s programming or how long they could be. However, watchdog groups like Action for Children’s Television (ACT) started to speak out about violations of FCC guidelines, which helped stem the tide of blatant advertising in kids’ shows.

Then along came the Gipper, and everything changed. Ronald Reagan, infamous nemesis of corporate regulations, began gutting the FCC from the inside, starting with his appointment of Mark Fowler as FCC commissioner in 1981. Fowler was a fellow acolyte of Big Business, a firm believer of the dominance of market forces as a yardstick for quality in broadcasting. Fowler summarily began cutting regulation after regulation for advertisement on children’s programming. In his mind, the free market would decide what programming was entertainment and what was just another ad.

The effects were quickly felt; as cultural historian Tom Engelhardt notes in his book The End of Victory Culture, by 1985, children’s programming experienced an approximate 300% increase in shows featuring licensed characters, from He-Man to M.A.S.K. to Transformers. Pac-Man had his own show, and so did My Little Pony. Children’s television became a cavalcade of full-length toy commercials, to the point where commercial breaks within those programs became virtually redundant. Under Reagan, the commercial culture of family entertainment had fully arrived: shows no longer taught lessons or told stories. They were just a means to sell stuff to kids.

That brings us back around to MAC and Me, which wasn’t directly affected by the FCC’s deregulation per se (it was a theatrically released film, not a television show), but was certainly the most unapologetic extension yet of that kid-as-consumer mindset these changes promised. To the film’s mild credit, its origin was initially motivated by altruism: RJ Louis, an ad guy who’d worked on McDonald’s advertising campaigns and was associated with Ronald McDonald House Charities (RMHC), wanted to capitalize on Ronald McDonald being “even more [well-known] than Santa Claus.” To that end, he’d create a film where the proceeds would go to RMHC, negotiating with McDonald’s to use their brand, stores, and elements. McDonald’s could market the film in their stores, offer video cassettes with an intro by Ronald McDonald himself, and even have a cardboard MAC (which stands for Mysterious Alien Creature, natch) in every store in the nation.

However, noble intentions and corporate branding do not make good bedfellows, and MAC and Me ended up a completely derivative disaster. Screenwriters Steve Feke and Stewart Raffill (the latter also directed) didn’t so much take inspiration from Spielberg’s classic lost-alien tale E.T. as they traced over it, from its concept of a young boy befriending a lost alien to the tan, scrotal look of both creatures. Plot beats are replicated note for note – the boy and his alien are helped by their clan of plucky friends; they’re chased by shadowy government suits – with little of Spielberg’s earnest sentiment or production value. In hindsight, it was relatively progressive of them to cast Jade Calegory, a boy with spina bifida, to play the wheelchair-bound lead, but that doesn’t excuse the rest of the film, which looks and feels so, so cheap.

Then, of course, there’s the product placement. McDonald’s reportedly offered no direct financing for the film, but gave permission to market the brand. And oh boy, did they ever. McDonald’s presence looms large over the film, particularly in one sequence set entirely in one of their restaurants.

Late in the film, Calegory’s Eric and his friends decide to hide MAC in a busy McDonald’s during an impromptu, inexplicably well-choreographed dance party. B-boys and B-girls breakdance in formation while kids laugh and cheer, eating French fries and Big Macs with the Golden Arches painted on the windows. MAC, disguised as a teddy bear, gets in on the fun, too, boogeying on the service counter with a troupe of backup dancers decked out in the classic green McD’s polo. Even Ronald McDonald himself makes an appearance, doing everything short of pointing at the camera and shouting, “Don’t we have so much fun here?!”

Of course, McDonald’s wasn’t the only brand that snaked its way into the fabric of MAC and Me. When Eric and his family first try to give MAC water, he refuses, but he’s gonzo for the flavor of Coca-Cola, sucking up the magical elixir through his suckling anus of a mouth. (They also feed him Skittles, and he clearly loves to taste the rainbow.) Later on, MAC’s alien family blunder their way through a grocery store full of terrified onlookers, conspicuously knocking over a mountain of Coke cans prominent in the frame. Today, audiences are used to films featuring the odd Pepsi vending machine in the background or Marky Mark taking a break from an alien invasion to pop open an ice-cold Bud Light in a Transformers movie, but it’s fascinating to see where the phenomenon clumsily began. 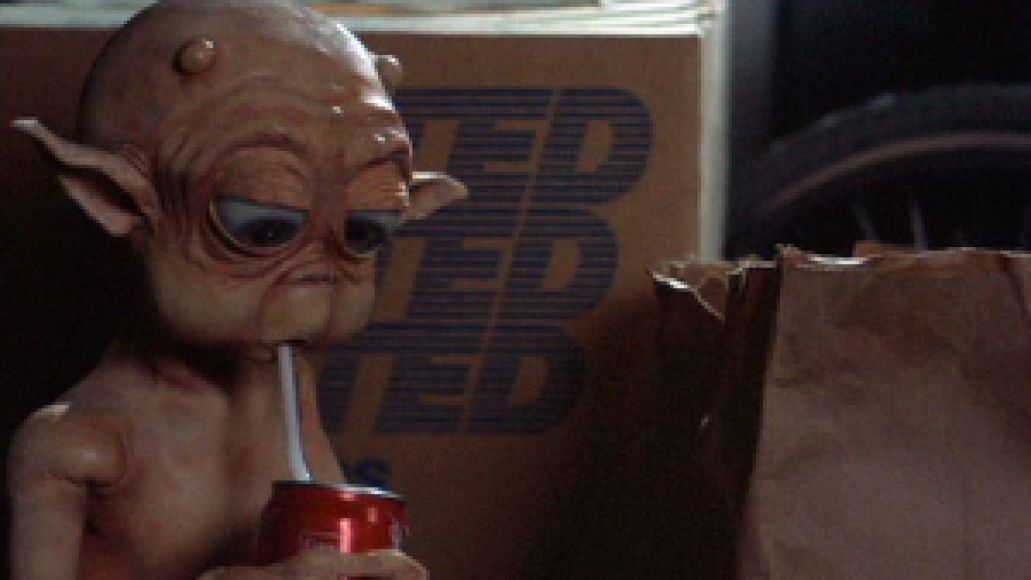 Sure, MAC and Me is easy fodder for jokes about product placement, and it’s fun to giggle at that clip of a kid in a wheelchair rolling off a cliff. But its notoriety comes at least partially from its brazenness as a corporate product, the end result of Reagan-era deregulation and an entertainment culture increasingly permitted to hard-sell products to kids. It’s so unapologetic in its nature as a tie-in for junk food restaurants and soda that audiences thankfully caught on, rightfully shunning it. However, that’s because the producers and brands behind MAC and Me got too precious, and audiences recognized they were being sold to, not entertained. Product placement is just as rampant now as it was then, but it’s more pernicious, more surreptitious. The ‘80s and ‘90s got kids used to the idea of their favorite shows and movies being springboards for buying stuff – now, it’s par for the course.

MAC and Me: How Ronald Reagan Paved the Way for One of the Worst Kids' Movies Ever