Piss off enough musicians and change will happen: Over 150 artists have signed an open letter to save Seattle’s legendary music venue, The Showbox, including members of Pearl Jam, Guns N’ Roses, and Death Cab for Cutie.

The call to action comes only a week and some change after British Columbia-based developer, The Onni Group, announced plans to tear down the venue in lieu of a 44-story luxury residential tower that’s more or less pissing on history.

“We have created a coalition to save The Showbox,” Gibbard writes, “not just because we have great memories of playing and seeing shows there, but because we want it to be available for future generations of performers and music fans to create their own.”

Currently, the group is working alongside Historic Seattle with the hopes that the venue can be protected by being designated as an historic landmark. As such, they’re asking people to contact the city council and mayor’s offices.

“The Showbox is integral to the social fabric of the Seattle music scene,” McCready adds, arguing that the venue is just “as important as CBGBs, The First Avenue, Filmore East and West, The Troubadour, and Whisky.”

“This Showbox Market demolition cannot stand! This place has musically flavored what Seattle is at its core. Progress is great and all, but not at the cost of the soul of the city,” McKagan insists.

“As our city continues to grow in density, it’s imperative that we protect the spaces that give Seattle its cultural identity,” Macklemore implores. “If we value our musical heritage and want to leave the next generation with a piece of authentic Seattle, this is our fight.”

They’re not wrong. Point to any artist on Spotify and they’ve like played its halls, from Duke Ellington to Buffalo Springfield, The Police to The Ramones, James Brown to Eminem, Soundgarden to Robin Williams, and Chris Stapleton to Prince.

Read the full letter below: 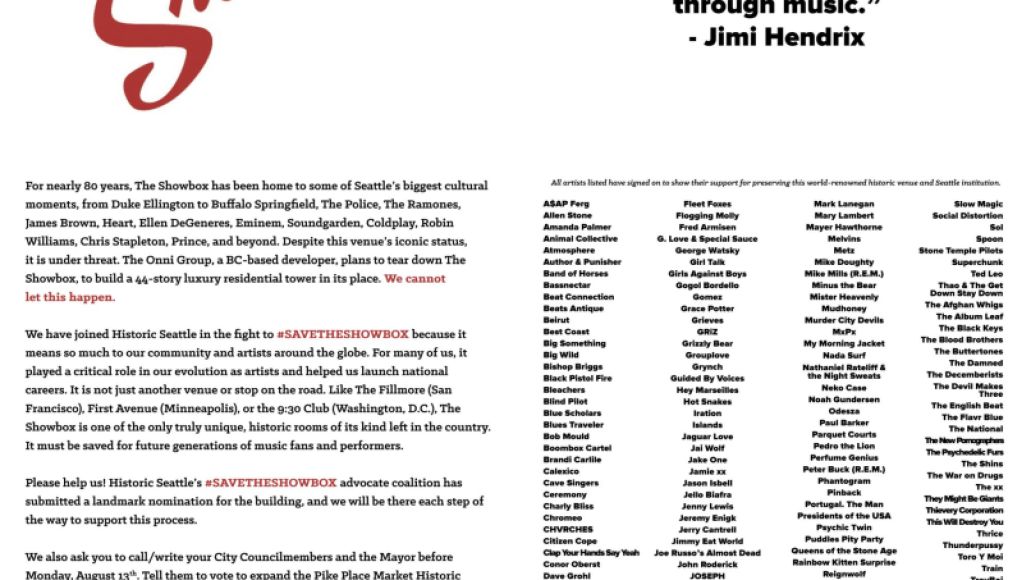 Pearl Jam, Guns N' Roses, and over 150 artists rally to save Seattle's The Showbox