Our recurring new music feature Origins gives an artist the chance to reveal the inspirations that led to their latest song.

In just a few days, Mothers will drop their sophomore full-length, Render Another Ugly Method. The follow-up to one of 2016’s best albums, When You Walk A Long Distance You Are Tired, the John Congleton-produced effort was initially previewed with the track “Blame Kit”, which was described as “the first of many songs on the record that deals with the body as an object that can be expanded or collapsed, inhabited or deserted.” That subject is revisited once again on the final advance listen (and opening track) to the LP, “Beauty Routine”.

“‘Beauty Routine’ talks about inhabiting a body or selfhood which, upon self-examination, becomes increasingly jarring or unrecognizable,” Mothers’ Kristine Leschper tells Consequence of Sound. “It explores the idea of semantic satiation as applied to obsessive rituals, especially those associated with ‘beauty’ and physicality, where repetition leads to a loss of meaning and cognitive recognition.”

The song floats in a Twin Peaks-esque haze of slow, reverberating guitar notes with Matthew Anderegg’s deliberately struck drums in the background. You can imagine yourself getting lost in the mist of the music, much as Leschper’s lyrical protagonist loses herself in the construction of her own physical appearance. It’s a theme that’s reflected in the track’s Jake Lazovick- and Richard Phillip Smith-directed video, which finds Leschper literally building a replica of her own “Beauty Routine”.

Render Another Ugly Method is out September 7th via ANTI- Records. For more on where the ideas in “Beauty Routine” came from, Leschper has dug into the track’s Origins.

Mirrors, and all other things which reflect ourselves back to us:

Furthermore, a poem about mirrors, “Today I Drove to a House and Took Care of a Baby” by Mira Gonzalez. She closes the poem with: “In a mirror I noticed something asymmetrical about my mouth I wanted to cover my entire body with the world’s heaviest blanket.” 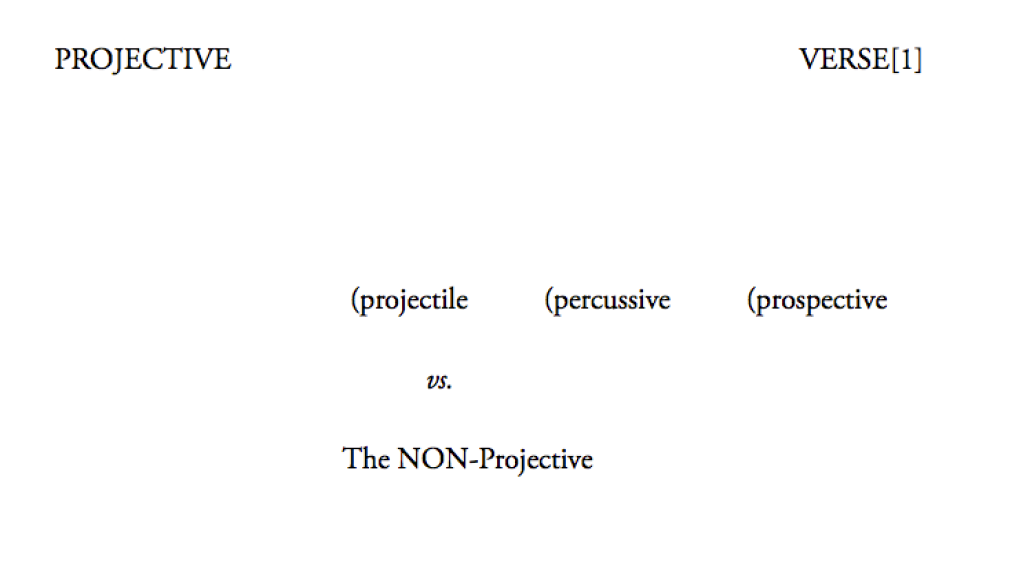 In this essay, Olson describes the value in using a poetic meter that disregards logic outside of being based upon a single unit of breath. This makes much sense to me in the context of songwriting, where the poem is most often breathed and performed. He says that a poem must be a “high-energy construct” and that “one perception must immediately and directly lead to a further perception.” These ideas were furthered by William Carlos Williams, who similarly describes the poem as a “field of action” that requires energy transfer and participation from both the writer and reader of the work.

The cost of therapy in the United States: 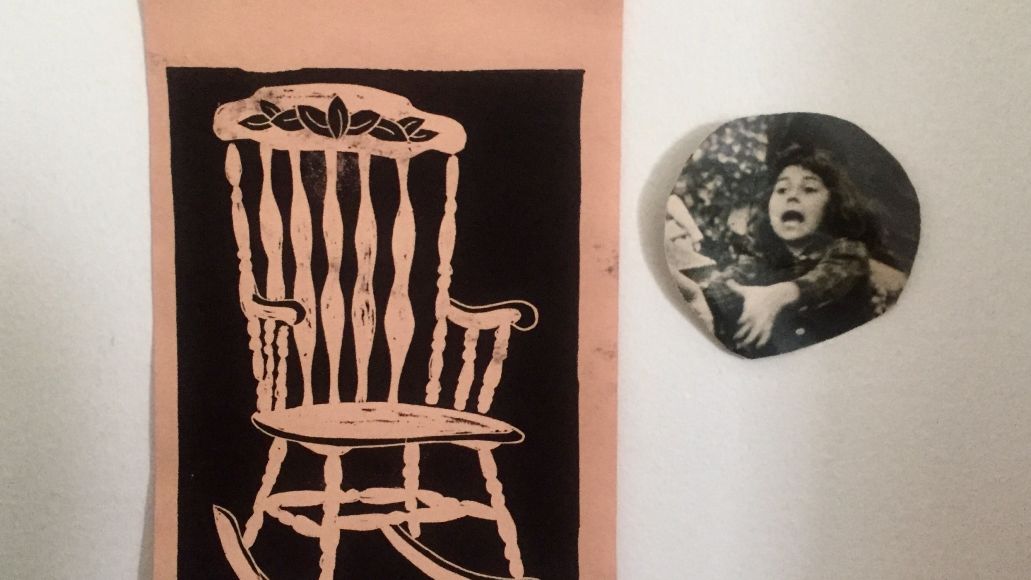 View of a wall in Kristine’s bedroom

“Beauty Routine” centers itself around the ritualized aspects of depression. I’ve lived with untreated depression for many years, due to several factors including financial limitations. Even if you are insured, many therapists are unwilling to work with insurance companies because they aren’t reimbursed at a fair rate — between 30 and 70 percent less than primary care physicians in some states. Mental health is simply not prioritized within the country’s privatized healthcare sector. This is the story for so many people, especially those who make less money than I do, and when we step back to consider how homelessness and incarceration rates are directly related to untreated mental health issues, it’s obvious how damaging this is on an enormous scale. Health care is a right, and mental health is a huge component of that, in regards to individuals and to the wellbeing of this country as a whole.

Cut-up technique used by the dadaists and popularized by William Burroughs: 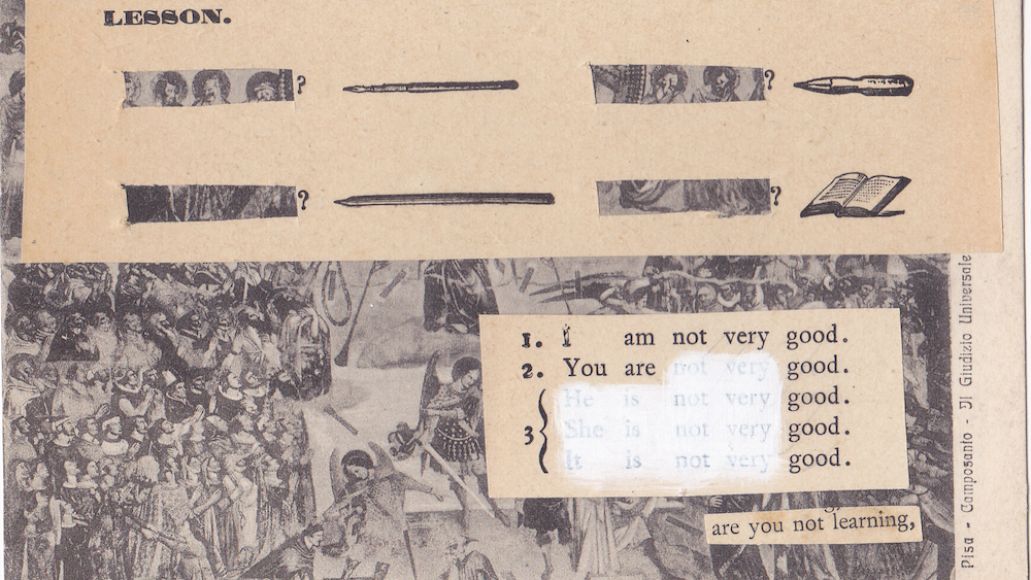 “Are You Not Learning”, a collage made during this time

I’ve used the cut-up technique regularly in writing and in visual work, usually to serve as a prompt for myself or a way to better find or invent relationships between different words and ideas. In 2014, I worked as an apprentice with an oil painter in Sainte-Valiére, France, and spent a lot of time browsing at the local bookstore. I found a pre-war French/English book for children and bought it for the illustrations, then realized how repetitive and curiously banal the text was, because it consisted purely of grammar exercises. I loved it — it was like this bizarro Gertrude Stein work. I spent the majority of my time cutting to pieces this beautiful piece of vintage grammatical history in order to discover/uncover poems and images. 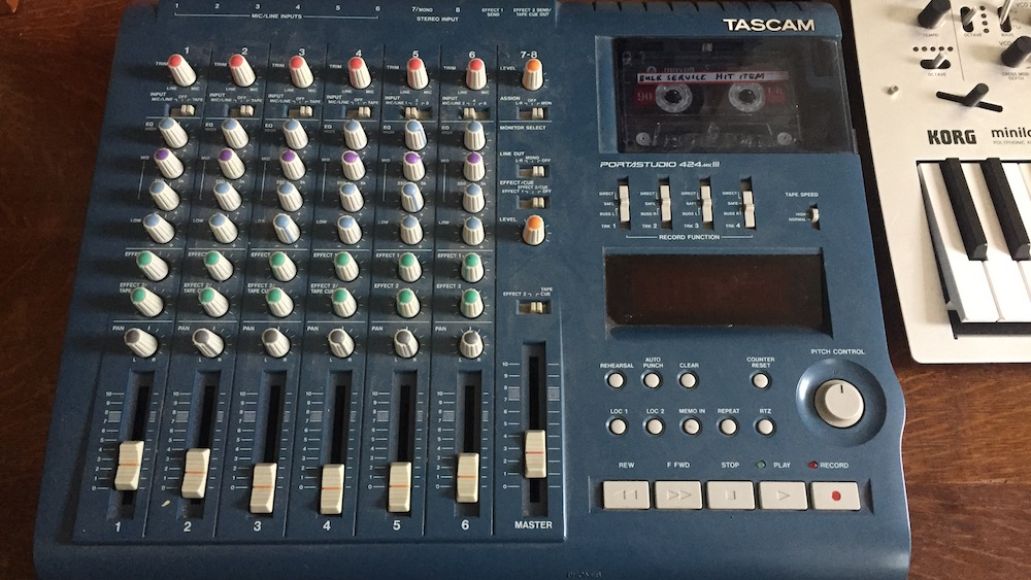 I originally wrote and recorded a demo of “Beauty Routine” for the Polyvinyl Singles Series, in which they ship a Tascam Portastudio cassette machine to different artists for them to record one-to-two songs with. I own the MKIII version of the machine and had used similar cassette recorders in the past, always finding them to be a very warm and candid-feeling medium. I wrote “Beauty Routine” and “It is a Pleasure to be Here” rather quickly in front of Polyvinyl’s MKII machine.