When Anthrax wrapped up the touring cycle for their 1987 breakout album Among the Living, the New York City thrash outfit found itself in the midst of a momentous career upswing that had, to a certain extent, caught the band off guard. Still, the sense of exhilaration in the Anthrax camp was such that drummer Charlie Benante was inspired to come up with the title State of Euphoria for the band’s fourth album.

Originally released on September 19, 1988, the offering from the classic Anthrax lineup of Benante, rhythm guitarist Scott Ian, vocalist Joe Belladonna, lead guitarist Dan Spitz, and bassist Frank Bello arrived not only as Anthrax’s star was rising but as the profile of thrash metal in general was surging higher and higher, as well. In 1988, for example, landmark releases by Slayer, Megadeth, Testament, Nuclear Assault, Voivod, Death Angel, Sacred Reich, Flotsam and Jetsam and, of course, Metallica, showcased the continuing evolution of what was once a fringe sub-genre into a complex, ever-more-refined artform.

With a deluxe remastered reissue of the album out now as a commemoration of the 30th anniversary of the original disc, Heavy Consequence wanted to dive deeper into State of Euphoria, so we caught up with Benante to discuss the album.

“You have to understand, that lineup was [only] two years old when we wrote and recorded Among the Living in 1987, and the ideas that were coming out were very adventurous,” Benante tells us. “That was exactly the music that I wanted to make and had always dreamt of making. [But] it was [still] a complete surprise that Among the Living was so well received. Now we were being looked at as a real fuckin’ band. And then the I’m the Man EP was even bigger after that. We couldn’t even watch it happen because we were in the middle of it. We were in the eye [of the storm]. All of that led to the title, and the whole vibe, of State of Euphoria.”

Looking back on that time, Benante, Ian, and former Metal Hammer editor Alex Milas set the stage in the liner notes to the new deluxe remastered edition.

Benante wanted that “whole vibe” to reflect in the album’s cover art, which was based on a concept drafted by the drummer, also the principal composer of the band’s guitar riffs, as well as its in-house art designer: “I wanted to show,” he recalls in the new liner notes, “that we were in this vortex — all of us just screaming with joy and also under all this pressure.”

Several times throughout Alex Milas’ liner notes essay, he quotes Ian and Benante lamenting how in retrospect they felt like Anthrax rushed State of Euphoria through to completion. It’s a curious tactic for a reissue campaign, with a band openly doubting its own record while repackaging it for fans to buy a second time 30 years later. But in this case, the transparency pays off thanks to a host of fan testimonials printed in the new booklet that tell a rather different story. Fan after fan (identified only by their social media handles) remind us how wide the gulf can be between our favorite music and the experience of the musicians who made it.

“I don’t hate that record,” Benante continues in our conversation with the drummer. “I just wish we had a little more time to give it that extra 25%. I didn’t take into consideration that you can be so critical of your own art that you need to shut your ears off a little bit because other people are hearing it in a totally different way. When I went back to put this anniversary edition together, I started to appreciate it more because I wasn’t so close to it as I once was. I spent a lot of time with this music again and I started to go back to that period. I think I was way too close to it back then. I was also very nervous about following-up that Among record.”

Benante had good reason to be nervous. It’s telling that many of the fan testimonials come from fans who were hearing Anthrax for the first time with State of Euphoria. This is noteworthy because of the significant — even drastic — sonic difference between the two records. Among the Living is characterized by an immediate sound that highlights the music’s unbridled vitality. In fact, Benante and Ian had been adamant in resisting producer Eddie Kramer’s efforts to drench that album’s mix in reverb and had to sit Kramer down in a tense confrontation in order to convince him to back down. That being the case, the heavy presence of reverb and spacious ambience on State of Euphoria not only comes as a bit of a shock but muffles the band’s roar somewhat.

In fact, according to the liners, Ian and Benante felt they had “a monster” of a record when they were tracking at Quadradial studios in Miami. It was during the mixing process where doubts began to creep in. “I started to think that about 75% of the record was strong,” Benante explains, “but 25% could have been worked on a little more.” But because the band had a full slate of European Monsters of Rock festival dates booked for the summer of ‘89, they went ahead and finished the album against their own qualms.”

As a kind of corrective, the reissue package also includes an entire disc’s worth of bonus, lo-fi rehearsal recordings. Track by track, listeners can now hear Anthrax working through decisions on structure and arrangement as a group. By definition, poor-quality rehearsal recordings can be difficult to listen to. In most cases, they amount to little more than filler for obsessive completists when there’s nothing left in the vault to raid for use as bait to justify re-selling a back-catalog title. In this case, though, the rehearsal tapes restore some of the bite to a body of songs with no shortage of quintessential — fast, chunky, often downpicked — Anthrax riffs. Tracks like “Schism,” “Finale,” “Out of Sight, Out of Mind” and the b-side “Le Sects” all convey the piston-like groove that defined Anthrax’s unique twist on the thrash metal formula.

“Le Sects” in particular points to Benante’s original vision of an album with a slightly re-calibrated balance of heaviness to melody than the one we ended up with. Like “Antisocial,” State of Euphoria’s most well-known single (and a staple of the band’s live set to this day), “Le Sects” (originally released on the 1991 b-sides compilation Attack of the Killer B’s) is a cover of a song by the French metal band Trust. Both songs originally appear on Trust’s sophomore album Répression, released in 1980 in both French- and English-language versions. Benante explains that both tunes were supposed to appear on State of Euphoria back to back — a decision that would have had significant impact on the complexion and flow of the album as a whole. While “Antisocial” is built on an anthemic, singalong hook, “Le Sects” (originally titled “Sectes” in French and “Sects” in English) hews much closer to the full-on thrashing drive of formative Anthrax releases like 1984’s Armed and Dangerous EP and 1985’s sophomore full-length Spreading the Disease.

“Antisocial” on its own, however, proved to be enough to propel State of Euphoria to gold sales in the U.S. But simultaneously, even as the album furthered the band’s commercial winning streak, the band felt as if certain factions of the music media had built them up only to tear them down — particularly the notoriously fickle British press. Benante took it personally. The band, he says, felt blindsided, which only compounded an already-mounting sense of stress.

“We didn’t know how to deal with rejection at that time,” he says. “We were just kinda taking everything as it came, and this was now a first bit of our art being judged. Not that the other records weren’t being judged, but this was being scrutinized.”

Making matters worse, the band’s choice of attire — most notably, the members’ penchant for bright-colored shorts — became a target of derision (somewhat fairly, perhaps, even by Benante’s own admission).

“The image of the band was also being included in that [criticism],” he continues. “That was very strange to me. Like, ‘wait a minute — are you listening to us or watching us?’ I must say, though, that at that time I felt like things were starting to get a little bit away from us. We were almost turning into a little bit of a parody of ourselves. We definitely had to pull it back a bit. We were just living life [in the spotlight] the way we were living our own lives. But we were being splattered all over the magazines. And, like I said, I think it started to get away from us. And companies were throwing stuff at us to wear. That was another thing. We would get boxes of shit. Some guys would have [individual] deals with a company and wear [that company’s gear] onstage and [the company] would be happy. But then we [as a band] started not to be happy. Like, ‘we gotta stop doing this.’”

Nevertheless, group interview clips from the period give the impression of a fun-loving, goofy bunch who were having a great time together.

“It really was like that, I would say, 80% of the time,” says Benante. “It wasn’t until other people would get involved that things would get a little weird [between us]. But when it was just us, it was good.”

Still, tensions that were almost completely hidden from fans were beginning to take their toll. And even though Anthrax ultimately welcomed the success that State of Euphoria achieved, the underlying frustrations would pave the way for the tone of their next album, 1990’s Persistence of Time.

“As far as [success] goes,” Benante recalls, “everything was going great. But we wanted to make the next record a lot darker and heavier. That’s where we were going.”

As for what’s ahead for the band in the wake of this reissue, Benante says that he wants to re-introduce some of the album’s deeper cuts into the current setlist and “play them with some new blood and fire.”

Our thanks to Charlie Benante for taking the time to speak with us. The 30th anniversary deluxe reissue of Anthrax’s State of Euphoria is now available through several outlets at this location. 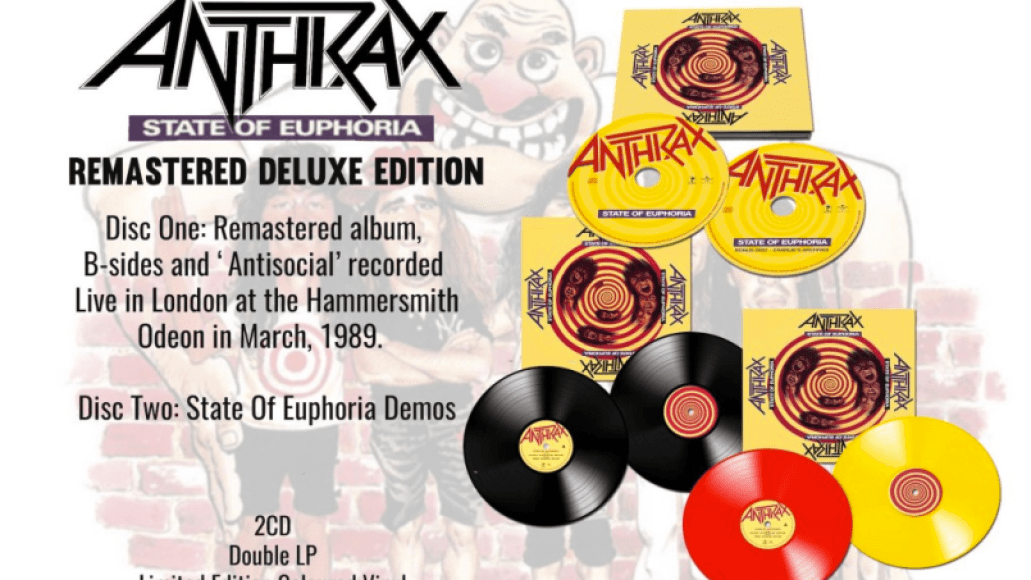