Walking into an Austin, Texas, karaoke bar for our scheduled interview, I have a preconceived idea of what kind of filmmaker Jonah Hill is.

During the Q & A following our screening of Mid90s, I had watched Hill speak about his unofficial film schooling where, as an actor, he watched modern masters like Gus Van Zant and Martin Scorsese practice their craft. I heard him discuss his artistic and personal relationships with Harmony Korine and Spike Jonze. Stepping into that room to speak with Hill and three members of his cast, I have already planned to paint Hill as a thankful constellation of modern cinematic influences.

Then Sunny Suljic tells a joke. I honestly can’t remember what he says, but it’s definitely some ribald adolescent humor. He at once derails any plans I might have had and teaches me exactly what kind of filmmaker Hill really is.

In the ensuing laughter (90 seconds worth, by my tape recorder’s count), I see the deep human bond Hill has formed with Suljic and his castmates Ryder McLaughlin and Olan Prenatt. I see a filmmaker who sloughed off any celebrity pretensions to make a human film about youth, identity, and skateboarding. 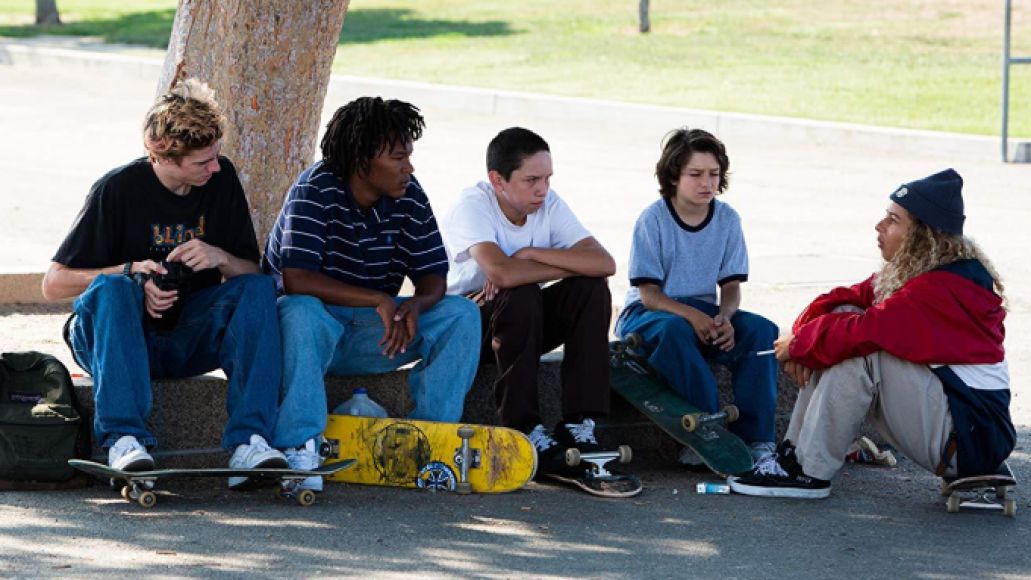 In Mid90s, Suljic plays Sunny, a young teen in search of a tribe. He wanders the streets of Los Angeles and is soon adopted into a clan of skateboarders. With new friends including Fuckshit (Prenatt) and Fourth Grade (McLaughlin), Sunny navigates the ’90s LA skate scene, family dynamics, and his own puberty.

“The whole movie is an animal kingdom movie, you know?” Hill says. “It’s really about this kid, this little cub, maneuvering his way through the animal kingdom.”

In the film, one of Hill’s main focuses is the passing of knowledge and wisdom within this urban kingdom. In one scene, Ray (Na-Kel Smith) prepares Sunny’s first real skateboard. “Even if you’ve never skated, I see people get really moved by that scene because it’s someone older teaching you something you’re going to be doing the rest of your life. It’s just so moving, especially when you’re young. There’s moments of acceptance like that or learning like that, that stick with you the rest of your life. I’ll never forget someone teaching me something like that. You just remember the first time someone set up a board for you.”

Something these young actors may never forget is their working relationship with Hill. For Prenatt, in his film debut, he felt surprisingly at ease. He says a large part of that was due to the vibe the young director established on set.

“Jonah approached us as a cool person who didn’t think about what his name was, and he was never in his trailer during all the shooting and after the shooting. I think we all got comfortable with each other as far as our relationships together. It helped us ask him questions. It helped us try new things that we might not be good at, as far as acting. It helped us do what we felt like doing and then correct it from there.”

Suljic, even with more acting projects under his belt, had a similar experience to Prenatt. He especially appreciated Hill’s flexibility as a director. “He would be super patient if we didn’t feel comfortable with the scene. He’d just let us mess around with it.”

Hill was prepared for the teens to play and built this into his shooting style. “I expected these guys to improvise. [Christopher] Blauvelt, my DP, and I planned on how to shoot the movie elegantly while still letting them improvise,” Hill explains. “They didn’t want to improvise. They were super hyped on becoming these people in a script I had worked on for three years.

“These guys got so good at their acting that they made the dialogue sound like they were just thinking of it at the time. And that’s what great acting is. It’s really a testament to their hard work.”

At the same time, many of the film’s most impressive scenes were not in the original script. Talking with Hill over lunch or after shooting, the teens’ real-life experiences began to bleed into their characters. Hill was smart enough to step out of the way and show another perspective.

“There was a moment when we were shooting the taco scene. Na-Kel was talking to me that day what it was like to be an African American skateboarder. He was just telling a story. I was like, “Whoa, that’s not my experience at all, and that’s a really profound experience.’

“I was thinking about it that night, and we were shooting a scene where they were talking about race stereotypes, and I asked my first AD Scott Robertson, ‘Can you give me an hour because there’s something really cool I could put into this scene?’ Mikael and Olan and I went outside in the parking lot, and [we] just started writing their kinds of ideas and experiences.

“For me, it was a chance to say, ‘Wow, this is not my experience, but I have a framework where you can say something that you want to say.’ That kind of stuff, to me, was where it felt like the film was in full bloom. We’re halfway through, and we found that there are pockets where you guys can say something you wanted to say from your life.” 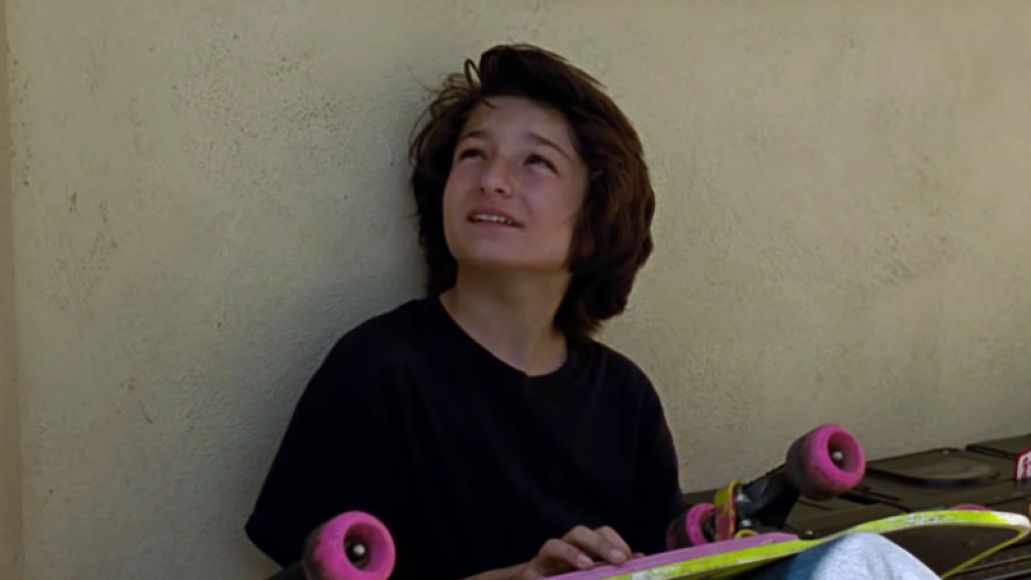 While Hill allowed his actors to bring their own perspective to the film, he also needed to teach them about an era none of them grew up in. To accomplish this task, he used a few different strategies. First, he gave every member of the cast an iPod filled with music of the time. For Suljic, this was extremely useful: “I’d actually bring my iPod and skate to the music that Jonah gave me. That got me into character. I was just listening to that music on and off the set and putting myself like I was in the ’90s.”

Listening to this music, Prenatt learned about what skate culture was actually like in the 90s. “Listening to the iPod gave us a further understanding of how hardcore people who skateboarded were and how explicit and violent it was,” he says. “Skateboarding started in the streets without parents, without anybody. They had no chaperone. That really gave me a perspective of how grimy skating was and what these characters had been through — what their perspective on life was at that age.”

McLaughlin found his way into the time period through the costume he was wearing. “The wardrobe for sure made me feel like I was in the ’90s. You see a skateboarder today, and they can look like an athlete. The ’90s look is distinct: big pants, big shirt, huge Osiris D3s. Tiny wheels and small board. Literally, once I got into the clothing, the way I skated felt different.”

Prenatt chimes in. “You walk with more oomph.”

“When we did the camera test and everybody was in their clothes at the same time, that’s when I was like, ‘Oh shit, I think this movie’s gonna work,’” Hill says.

When I ask about other strategies Hill employed to get his cast into the ’90s mindset, he points to a pile of smartphones on the seat next to Suljic. On set (and even in our interview), it was no phones allowed.

“Taking away everyone’s phones was great. The only reason I set it in that time period was because conversations came from lack of technology. So, it’s like we all would just talk; talk about the movie and talk about what the scene was about. And then we’d just laugh. Things would get deep sometimes because that just naturally happens when you’re hanging with each other with no distractions.”

He continues. “It’s fun doing a movie with kids because you actually become like you’re 15 again, and you just smile. Last night we all got ice cream, and then I’m just going to sleep. I hear this thunderous banging on my door. I hear giggling and running away from my door. You forget, ‘Oh my God, they’re teenagers staying in a hotel with their friends.’ I remember, on set, I was like, ‘Have you had water today?’ ‘Do you have sunscreen on?’” Hill smiles as he remembers shooting his first film. I smile and hope he will make more.

“You know, it’s like the best. And then you’re making this really moving, emotional piece of work at the same time. There’s no feeling like it in the world.”

Mid90s begins its limited release today, October 19th, and will roll out in expanded cities over the following weeks.

We Talk Skating, '90s Music, Youth Culture and More With Jonah Hill and the Cast of Mid90s