Setting the Stage: Back in early 2016, Phil Collins told us there was no tour. He’d like to do “a few shows,” but lapping the globe wasn’t in the cards, especially while coping with the nerve damage that benched him for years. But in 2017, a series of big-ticket comeback residencies in Europe billed as the “Not Dead Yet Tour” (after his autobiography of the same name) became an actual tour. Further European dates appeared, followed by a full South American lap earlier this year. Now, all through October, Collins is taking North America for the first time since Genesis’ 2007 Turn It On Again Tour or his cheekily titled last run as a solo act, The First Final Farewell Tour, in 2004.

Appropriately, this leg of Not Dead Yet kicked off in South Florida. Collins, having made his home in Miami, gives the often-ignored state a fair amount of love, including performances at his annual Little Dreamers Benefit Gala, but those short sets pale in comparison to the sold-out, stadium-packing spectacle he brought to Sunrise, Florida’s BB&T Center this past weekend. 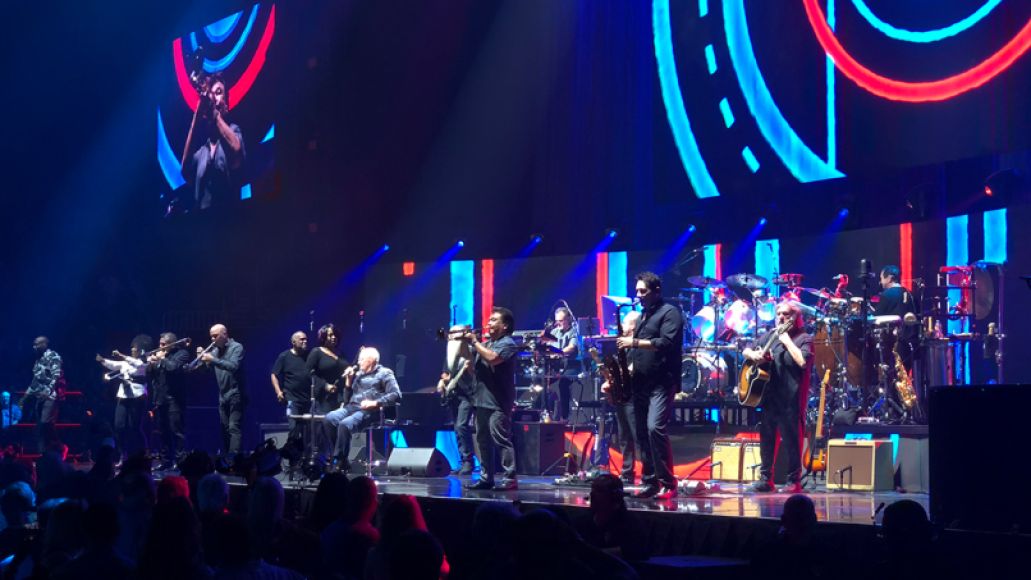 Taking the Stage: An important thing to know is that Collins’ ailments have left the leading man more or less stationary. He enters with a cane and spends most of the show in a swivel chair at the head of the stage. But seated though he is, this isn’t an intimate show; it’s a big show, and Collins brought with him enough spectacle to more than make up for his lack of mobility. (Besides, theatrics and stage diving were always more Peter Gabriel’s bag.) Collins’ band is 14 members strong: including four backup singers, a four-piece brass ensemble (The Vine St. Horns), Genesis and solo-collaborator guitarist Daryl Stuermer, and Collins’ 17-year-old son, Nic, on the drums. The whimsy of this large band set against the still golden-voiced Collins seated at the front isn’t lost on the performers. The brass, backup singers, and guitarists occasionally stage themselves around the seated band leader for antics, such as during “Who Said I Would?”, with Collins swiveling about, pointing and demanding to know.

In Nic Collins’ four-year tenure drumming for his dad, he’s become a beloved feature. He’s got his dad’s energy for sure, and when Collins says that he can play better than he can … there’s a distinct possibility that’s true. It doesn’t hurt that young Collins’ heat is often met and complimented by Richie “Gajate” Garcia on every percussion instrument shy of a drum kit. The band is vibrant – overflowing with talent and artistry – but the two drummers imbue each song with a punch oftentimes well beyond the recorded versions. Even the jaunty but sobering “Another Day in Paradise” immediately comes to life with a surprising energy that sets the pace for the rest of the night… With notable exceptions. 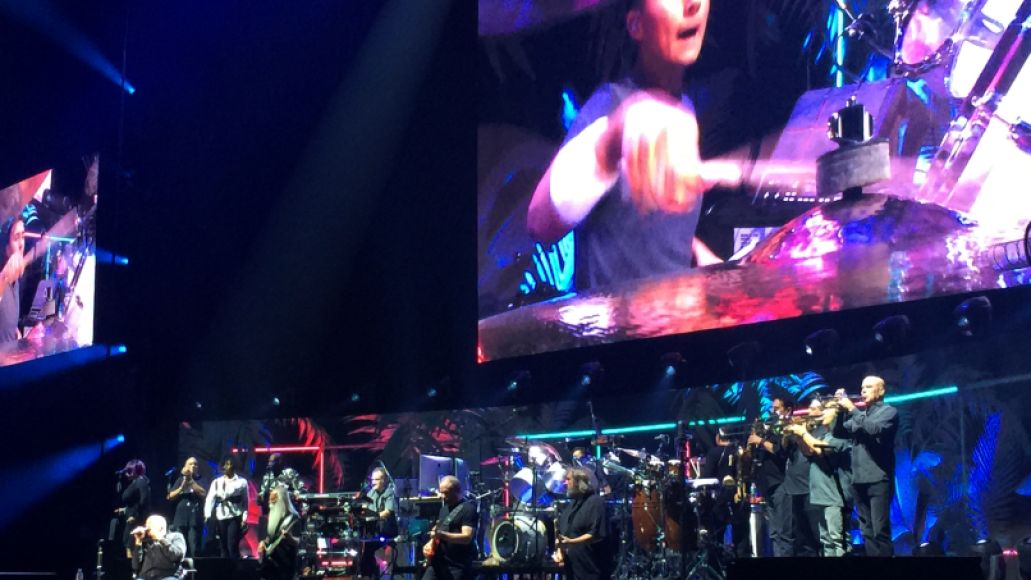 Two Worlds: A saccharine interlude of duet “Separate Lives” and Tarzan’s “You’ll be in My Heart” was a necessary concession to the adult contemporary fans. The performances were decent, but put a drag on the the set – though Bridget Bryant’s vocal performance was dazzling. Fortunately, that two-song diversion was counteracted by its antithesis: a drum performance, at first a jam with Garcia and Nic Collins, then becoming a trio as Collins the Elder sat behind a slap-top cajón. He might not be able to hold sticks any more, but Phil brought the fire and was soon surrounded by his son and Garcia sitting atop standard cajóns of their own – a freewheeling performance that exploded into “Something Happened on the Way to Heaven” and launched a nine-song block of tracks so potent and so expertly played, any of them could’ve easily ended the show (and eventually did). 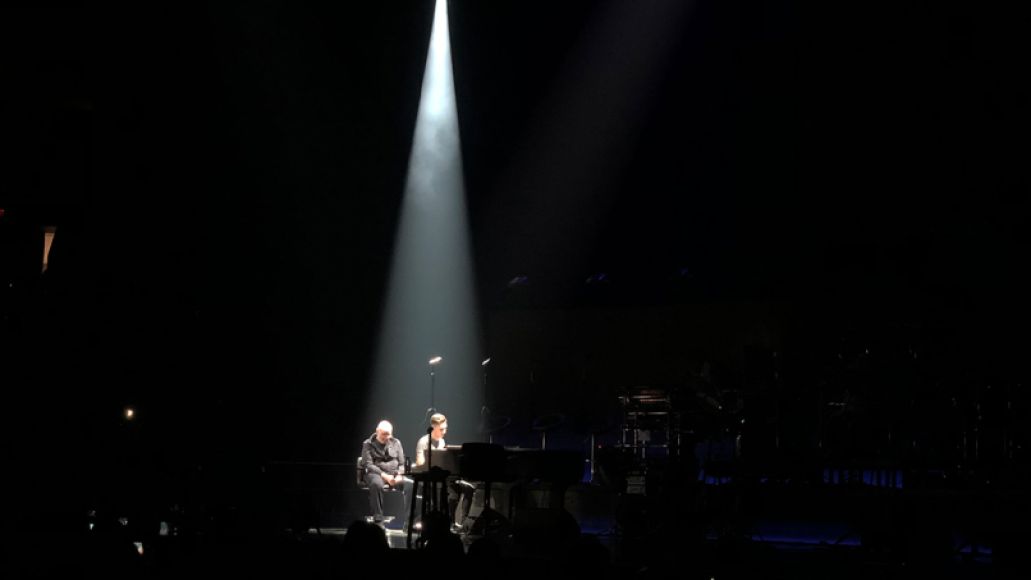 Don’t Let Him Steal Your Heart Away: The Collins men sat together behind a piano for a heart-rending performance of the tragically slept-on “You Know What I Mean”. (Nic Collins picked out the track in particular and taught himself to play it.) Then Phil took his center-stage position again – this time standing for the one song that simply mustn’t be sat through: “In the Air Tonight”. The distorted intro featured voices… was it Sonny Crockett calling his estranged wife in those sobering moments before risking it all on the mean streets of Miami? It might’ve been; hard to tell, really, but the track has always thrived on its harsh line between clarity and obscurity. Even the implication of evoking Miami Vice’s most chilling moment while Collins stood, lit by warm spots, is enough to let the moment tap into the grim, personal memories of when the song hit hardest.

After that, the show was nothing but a party. The obligatory “Can’t Hurry Love” delivered live the joy that the overplayed studio version could never hope to contain –  smashing a “now break!” directly into “Dance into the Light”, elevating a lesser-loved track into the perfect high for it to thrive. “Invisible Touch” served as the ideal Genesis track to keep the party going, followed by “Easy Lover” (sung by Collins, Amy Keys, and Arnold McCuller) and the most jubilant, streamer-soaked performance of “Sussudio” imaginable. Topped off with a sing-along encore of “Take Me Home”, the only thing missing is a post-coital cigarette.

While the show has remained relatively unchanged since its launch, and darker tracks like “Do You Know, Do You Care?” or “Mama” are woefully absent, Not Dead Yet is, against all odds, a phenomenal return (yes, pun intended), and it’s not even over yet! Next year, the clearly unstoppable Phil Collins continues the tour in Oceania. 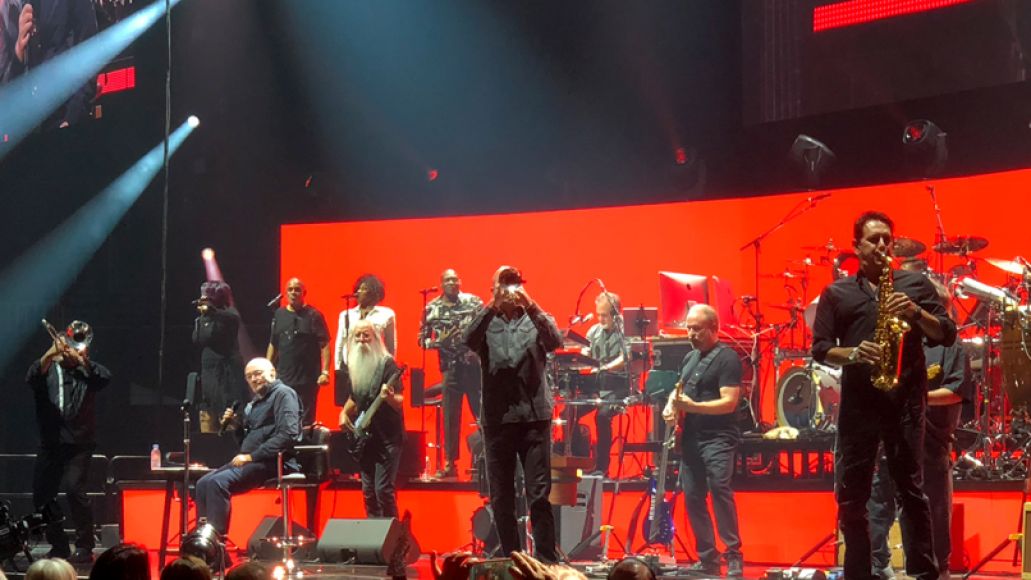 Setlist:
Against All Odds
Another Day in Paradise
Missed Again
Hang in Long Enough
Throwing It All Away
Follow You, Follow Me
Can’t Turn Back the Years
Who Said I Would?
Separate Lives
You’ll Be in My Heart
Percussion Trio
Something Happened on the Way to Heaven
You Know What I Mean
In the Air Tonight
Can’t Hurry Love
Dance Into the Light
Invisible Touch
Easy Lover
Sussudio
Encore
Take Me Home