Spencer Krug, the Canadian cult musician behind Wolf Parade and Sunset Rubdown, will return with his fifth and final LP under his Moonface moniker, which the songwriter has reserved for his more experimental projects. Called This One’s For The Dancer & This One’s For The Dancer’s Bouquet, the ambitious, 16-track album arrives on November 2nd via Jagjaguwar.

The album was born out of “two separate projects,” a press release reveals, “each with different collaborators, recorded in different studios, in different towns, in different years.” They’re distinguished on the album by their POV—half of the songs emerge from Krug’s own perspective, while the other half adopt the POV of the Minotaur of Greek mythology. (Anyone familiar with Krug’s myth-heavy Sunset Rubdown work shouldn’t be surprised.)

The project sounds as if it will encompass elements from the majority of Krug’s Moonface work. Marimba will play a role, echoing the project’s first release, 2010’s Dreamland EP, and the record’s electrified aspects recall Krug’s numerous collaborations with the Finnish instrumental outfit Siinai.

Meanwhile, the album’s stirring lead single, “Walk The Circle In The Other Direction”, is buoyed by Krug’s nimble piano work, which formed the spine of 2013’s wonderful Julia With Blue Jeans On. Ghostly rips of saxophone occasionally puncture the track, which rides along Krug’s propulsive vocal melody. No matter how much he experiments, it’s that rich, spectral voice that will emerge as the most captivating part of any Krug project. Hear the track below.

“I never made an album under that name I was embarrassed by, and this is one of my favorites, so I may as well get out while I still can, on a personal high note to boot,” Krug said in a statement. “Take this album as a sort of parting gift before Moonface sails into oblivion; the alter-ego’s final offering.”

Pre-order the album here. All pre-orders will ship with a postcard included for “a handwritten AMA.” Basically, if you write out a question for Krug, he’ll personally respond and mail it back to you. Neat.

See the album’s artwork and tracklist below. 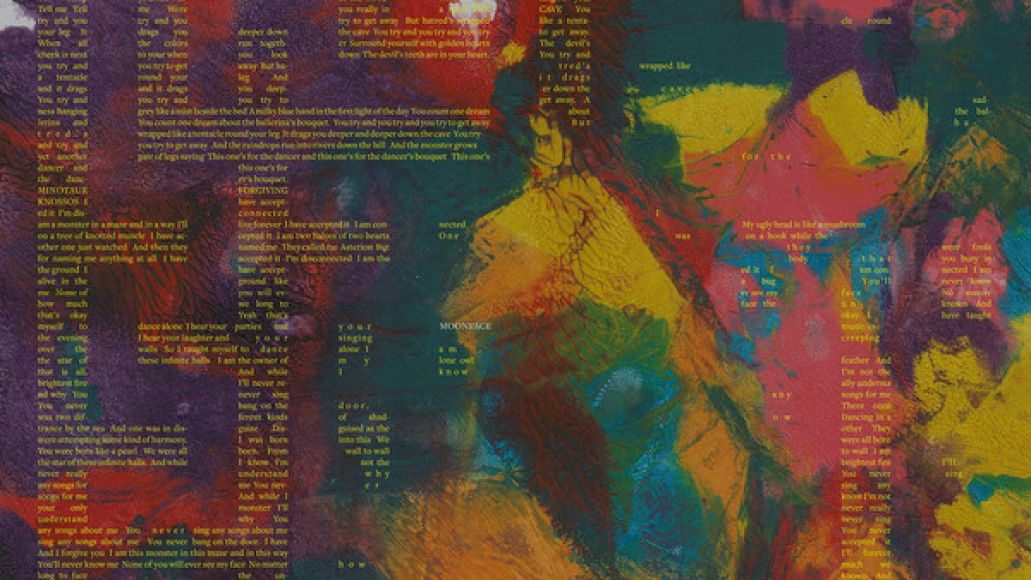