Beauty is in the eye of the beholder. Art is subjective. Music and movies aren’t about competition; they’re about artistic expression. Well, for those of you who know better than to believe those lies, welcome to another installment of Vs. This time, we figure out if the Harry Potter books or films are more magical.

In 2001, J.K. Rowling’s beloved Harry Potter books kicked off their parallel journey as the kind of sustainable, decade-long film franchise that modern movie studios have come to covet above most other things. The depth of Rowling’s world was tailor-made for film adaptations, the novels so rich in detail that any filmmaker with even a little bit of vision could make incredible things out of them.

Yet at times, it’s difficult to truly compare the two. The film series, by the nature of film and the necessities of making movies that could equally appeal to both die-hard fans and newcomers, had to cut so many of the smaller stories and side journeys that made the books so rich. Likewise, the films had the advantage of paring the stories down to their most essential elements, in hopes of translating the novels’ deep emotional and social resonance in far less time. Each offers its own pleasures, and preference is often as simple a matter as which one you grew up with. If you grew up reading the books, that relationship will always be different. If you’re among the people for whom ad nauseam replays of the movies on ABC Family (or sorry, Freeform) were a childhood touchstone, you might be of a different opinion as well.

We won’t pretend that we can settle the debate any more definitively than anybody else who’s tried, but that’s hardly deterred us from taking a crack at it all the same. We’ve put each of the novels and films head-to-head and hope to help continue the discussion of which work stands at the forefront of accomplishment. If you’ve had trouble shedding light on your own feelings about this, let us offer a helpful lumos. In the head-to-head debate, who’ll emerge as Head Boy of the respective series?

Harry Potter and the Philosopher’s/Sorcerer’s Stone 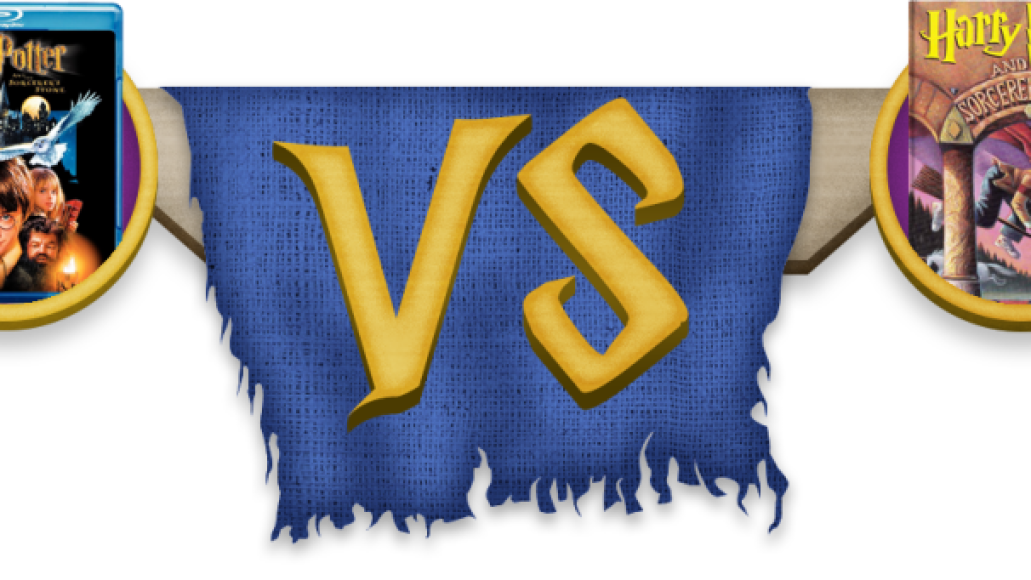 Here’s where it all began, first in 1997 and then again in 2001. It’s an origin story with a hell of an origin story: Jo Rowling dreams up a boy on a train, and by the time she deboards, he’s a wizard with a magical school in his future. After years of writing in cafés and typing (and re-typing) on an old-fashioned typewriter, of being turned down by agents who almost certainly now feel like they missed out on the chance to draft Michael Jordan, her novel was picked up by Bloomsbury and her whole life changed. She’s toured libraries, bookstores, classrooms, and movie theaters around the world. Accio, New York Times Bestseller list; Petrificus Totalus, the financial worries of a single mom.

Sure, all origin stories fit the same mold, but this is a solid one. It begins with a tragedy that’s also cause for celebration, then jumps to an unhappy child’s life suddenly becoming magical — literally. Is this the most profound entry in the Potter series? Of course not. This is the place in which we are introduced to not only Harry, but the entire wizarding world. No time for sociopolitical commentary; we’ve got Hagrid to meet.

While the biggest social and political themes in the series don’t emerge in full force for a bit yet, they’re still present here, from Harry’s first interaction with Draco Malfoy to the big moment where selflessness becomes the most important magic one can possess. Both possess a level of subtlety nowhere to be found in Chris Columbus’ 2001 film, a faithful adaptation that spends so much time trying to get the book just right that it forgets to add the most important ingredient in this particular potion: imagination.

Sure, this is a movie anchored by three very young, somewhat green performers, and that’s going to be a little tough, no matter how charming the kids in question. That’s nothing compared to how flat Columbus’ magical world feels. Take the moving staircases of Hogwarts as an example: one moment they lead to one place, the next to somewhere else entirely. There’s a trick step you always have to jump and shortcuts and false walls around every corner. How does Columbus bring these silly wonders to life? He has them slowly swing through the air like a giant piece of industrial equipment. How dull, how slow, how utterly not of this world.

Still, it’s not … terrible? Faint praise for the film version of a book that got the whole world reading.

Head Boy: The book, by a long shot. 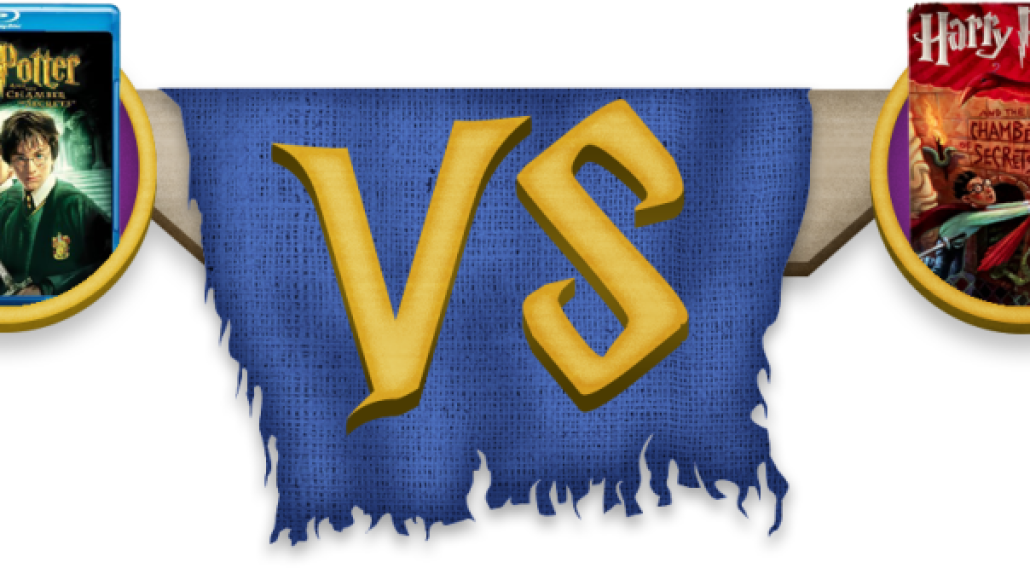 The second installment of Harry Potter was arguably the most validating for the series. In the novel series, book two was the sequel that had to live up to the first story and keep readers interested. In the film format, Chamber of Secrets had to prove that Potter was worthy of becoming a motion picture series and keep the franchise afloat, lest it go the way of the Divergent series a decade later, which will culminate with a downgrade to a TV movie in 2017.

Harry Potter and the Chamber of Secrets brought us back to the world of Hogwarts after a long, lonely summer alone with the Dursleys. It brought us the irritatingly devoted house-elf Dobby, the Weasley family home, a sniffling spirit in a bathroom, voices in the walls, and a young Lord Voldemort. But where the film really pulled out all the stops was with the casting. Julie Walters had already made a brief appearance as Mrs. Weasley in Harry Potter and the Sorcerer’s Stone, but her opening scene in Chamber of Secrets showcases her seamless performance, as she scolds her children while coddling Harry at the same time and really establishes the character we would all eventually grow to wish was our own mother. The iconic Mark Williams brings a humanization to Mr. Weasley that the books alone did not provide; in the novels, he was more on the stiff and bumbling side, a bit stale with a spark of unearthed imagination well-hidden. The film version is much more relatable, and Williams turns Mr. Weasley from a bland “Muggle lover” into a more heartwarming and relatable Ministry official. And then there’s Gilderoy. Kenneth Branagh’s Gilderoy Lockhart is like the page brought to life, played in a lovably pretentious manner that exudes finesse, charisma, and smarm throughout, culminating in his villainous contention at the film’s climax. He creates a version of Lockhart that lives boldly onscreen and forever in the mind’s eye.

But beyond the performances is the unplanned.

I don’t know about you, but my 12th year was arguably my most awkward — I had big, bulky glasses and wiry metal braces in an array of colours that at the time I thought were cool, but in retrospect just brought even more attention to the dental apparatus. I was awkward and lanky and changing and not sure what was happening. Harry Potter and the Chamber of Secrets features a prominently 12-year-old cast of characters and begins to address their budding puberty in an all-too-familiar way. Ginny’s silent, star-struck crush on Harry is resonant in the book, but nothing beats the awkwardness of puberty on the silver screen. Her wide eyed, stiff-as-a-board reaction every time she encounters Harry is equal parts Petrificus Totalus and preteen love. But better yet is Daniel Radcliffe’s actual voice changing. Throughout the film, Harry’s voice varies between high and squeaky, low and mature. In a twist of fate that no one could have planned, the actor’s actual puberty contributes to the film in a way that the novel can’t fully translate. And the fact that an entire cast has their puberty filmed and retained in the annals of history for all time is reason enough for the film to beat out the book in a battle royal. Puberty for the KO.