There are a number of reasons for a band to drop off a tour, including the recent partial toe amputation that forced High on Fire off their planned trek with Municipal Waste, but font size is certainly a new one. Yes, that’s right, Bad Omens have apparently dropped off their support stint on the newly announced Amity Affliction and Senses Fail co-headlining trek because they weren’t happy with the size of their name on the tour poster.

The “Misery Will Find You Tour” was just announced a couple days ago in a press release, with The Amity Affliction and Senses Fail co-headlining, along with support from Bad Omens and Belmont. But today, Both Senses Fail and Amity Affliction broke the news about Bad Omens, stating, “We have to let you know that Bad Omens have pulled out of this tour. They were unhappy about the size of their name on the artwork and felt the need to pull out the day after we announced.”

The statement continued, “Both The Amity Affliction and Senses Fail are working hard to find a replacement and we look forward to sharing that with you as soon as possible.”

The North American trek kicks off January 4th in Anaheim, California, and works its way east before returning to the West Coast for a tour-closing show February 9th in Los Angeles. Full dates can be seen below, along with the original tour poster in question. 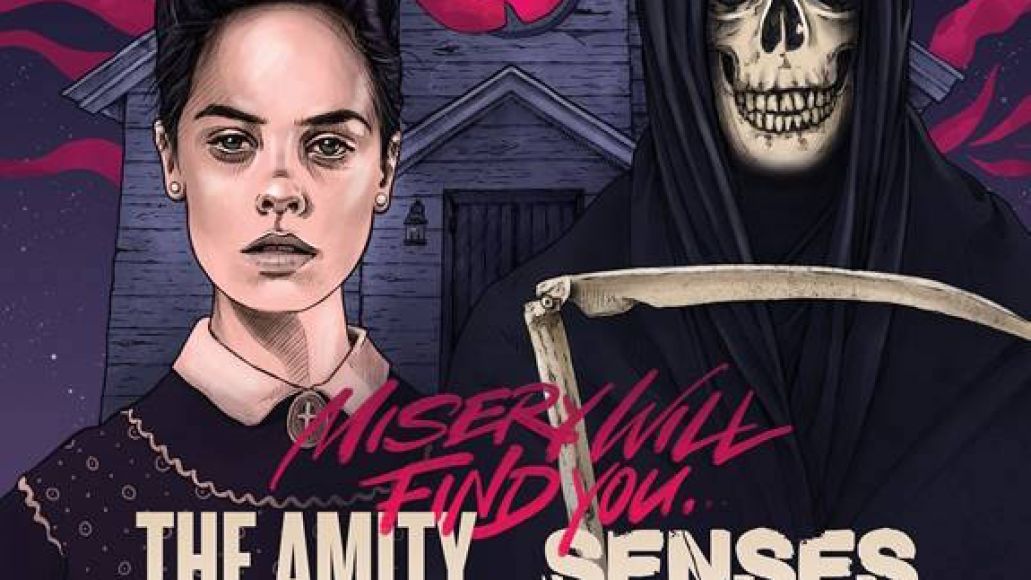 UPDATE: Ash Avildsen, the founder of Bad Omens’ label, Sumerian Records, has lashed out at the co-headlining bands for publicizing the supposed reason behind the news.

older bands bullying younger bands, both privately in deal points and publicly on the internet. cool story guys. take notes from the movie business- bullying people in the industry will no longer be tolerated-no matter who your manager or agent is, or how “powerful” you are. ✌????

UPDATE #2: Bad Omens have released their own statement, also blasting the bands for “public shaming.” They did, however, see the humor in all of this, releasing a new T-shirt with a tiny band logo on it. The full statement reads:

“We are always professional and respectful with the bands that we tour with. Anyone that’s toured with us can attest to that. We are not a band that creates problems or ever finds itself involved in “drama”. With that being said the last thing we wanted to do was make a big deal out of our departure from the tour with Senses Fail / Amity Affliction when announcing that we would no longer be on it.

But due to both Senses Fail and The Amity Affliction’s attempts to publicly drag our name in the mud along with all of the online bullying they’ve not only welcomed but encouraged – they’ve forced our hand.

The terms of our deal to be the direct support act on this co-headline tour were negotiated prior to accepting the tour and they were not honored. Our team politely and professionally asked it to be honored before the tour was announced and they refused. Specific assets requested were neither sent or approved. After all of this and the tour still going live we did our best to remedy the situation to stay involved and we were met with total disrespect.

At this point it was a matter of principle. We aren’t going to be another young band that gets pushed around by older bands. Sorry if that doesn’t work for you. This public shaming campaign the bands have created online is both ironic and symbolic to the situation, as well as confirmation we made the right choice by leaving this tour.

I grew up listening to Senses Fail and I never imagined they would stimulate this kind of bullying or shaming over something so trivial – this unprofessional and ugly behavior is highly disappointing. None the less we wish the bands the best on their tour, and we apologize to anyone we’ve disappointed by dropping off the tour.

Standing up for yourself in any type of relationship, whether business or personal, is something Bad Omens believes in. Sometimes that means people get upset, hence having to write this.

We hope you enjoy our new shirt design…”