Cannibal Corpse and Morbid Angel will bring their brutal sounds to the “2019 Decibel Magazine Tour”. The just-announced trek will kick off on February 17th in San Antonio, Texas, and run through a March 17th date in Tampa, Florida. Necrot and Blood Incantation will also appear on the bill.

However, Cannibal Corpse won’t be on the full tour. The band will jump off the trek after March 7th, and New York’s Immolation will take their place from March 8th through the Tampa gig. The full itinerary can be seen below, and you can grab tickets here.

“We’re really looking forward to our second appearance on ‘The Decibel Tour’; they always put together a killer line up and this time is no exception,” Cannibal Corpse bass player Alex Webster said in a statement to Decibel. “We’re particularly excited to be hitting the road with our friends Morbid Angel. In fact, this will be the first time we’ve toured together in the USA.”

Meanwhile, Morbid Angel’s Steve Tucker remarked, “Everyone here in the Morbid Angel camp are stoked to do this tour with Cannibal Corpse. To celebrate, Morbid Angel will be performing a mean-ass set of songs that will cover the entirety of our years of kicking ass.”

Morbid Angel founder Trey Azagthoth added, “We will be adding some of the older songs back to our set. See you all there.”

Cannibal Corpse are currently on tour with Hate Eternal and Harm’s Way.

* = no Cannibal Corpse; Immolation playing instead 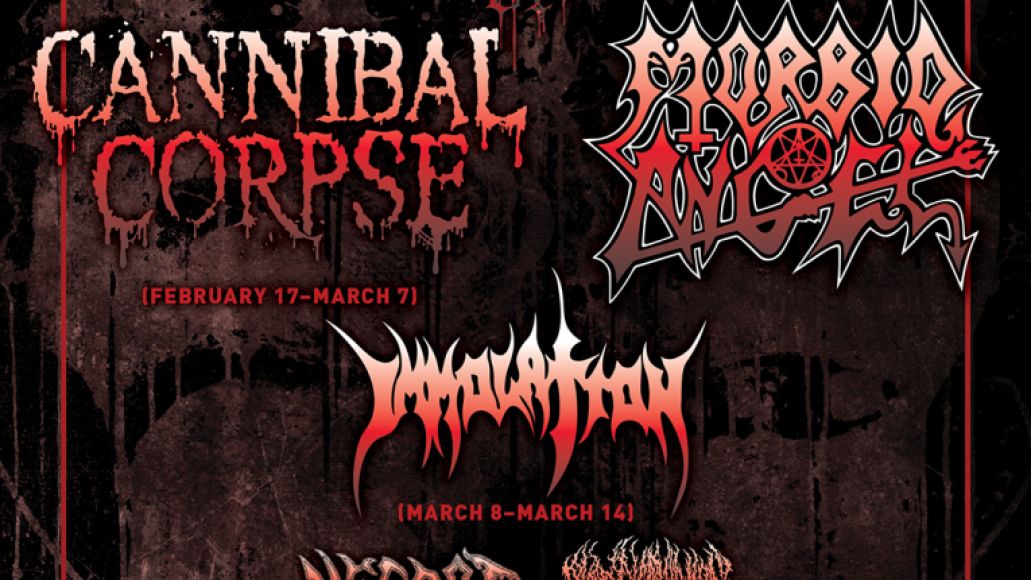