Blood on the Tracks makes the case for still owning physical albums. If it doesn’t already exist, there’s a remarkable essay waiting to be done just on the experience of holding Bob Dylan’s 1975 masterwork in one’s hands. Like the songs within, the album sleeve, when flipped between front cover and back, evokes so many strong, immediate feelings. There’s the curious neatness of the underlined, right-justified, all-capitalized artist name and title descending line by line, one word at a time, down the left-hand side of the album front in white. A band of reddish purple (or purplish red) drapes (not drips) beneath it – a color much closer to a deep bruise than pooling blood. Such a simple, precise layout for such a raw and emotionally restless record.

However, we then gaze to the right to find Paul Till’s hazy cover photo. If we let our eyes focus for a moment, an image, which has more in common with Monet’s “Water Lilies” than the artwork of most ‘70s folk rock albums, comes to the surface. The dulled boundaries of Dylan’s profile float, as if ripples on a pond, but somehow hold together below a thick head of curled hair and a thin pair of dark sunglasses. The image might be of Dylan sitting at a piano, but he could just as easily be posing for the U.S. Mint. 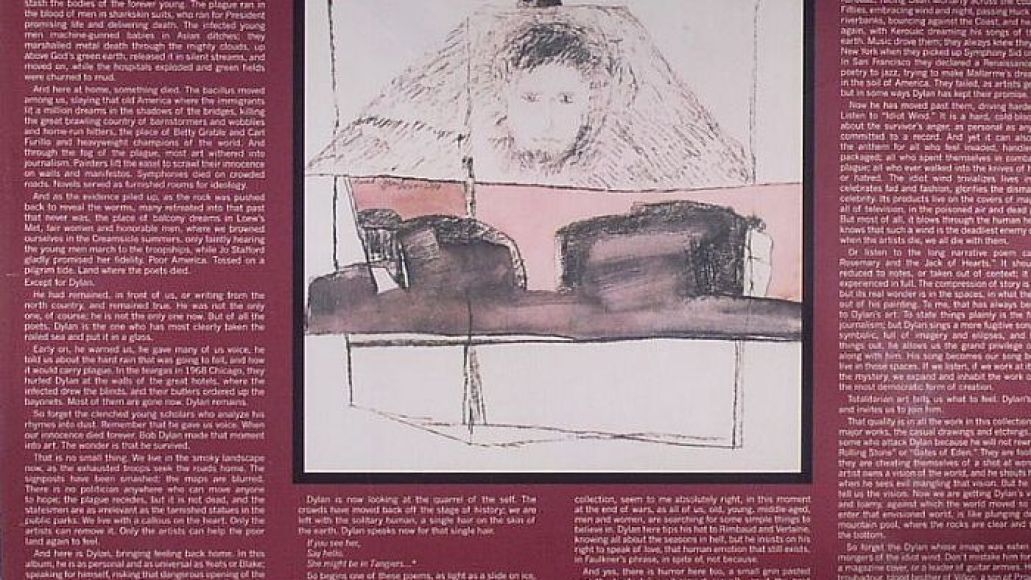 No doubt an art class could spend an entire period making heads or tails of French artist David Oppenheim’s illustration on the sleeve’s reverse, and Pete Hamill’s sprawling 1974 liner notes horseshoeing around Oppenheim’s sketch could themselves warrant liner notes. All of it instantly unforgettable. Branded in the mind at once and always. An arrangement of images and words and colors and fonts that somehow portend a classic album – a work of great weight – before ever listening to a single recorded note or lament. Anyone who has ever spent time holding the record can attest to that apparent heft.

However, nothing, apart from the songs themselves, carries the power of that title: Blood on the Tracks. It’s the type of phrase that indeed could’ve been “written by an Italian poet from the 13th century.” One that didn’t originate as the title of a ’70s acoustic pop album but rather endured the linguistic weeding out of the centuries because nothing quite so durable in construction, relevant to experience, or forceful in its evocations emerged to replace it.

Consequence of Sound and Sony bring you an exploration of legendary albums and their ongoing legacy with The Opus. Hosted by Paula Mejia, the first installment starts Friday, November 16th and revolves around Dylan’s Blood on the Tracks in conjunction with the new Bootleg Series release, More, Blood, More Tracks. Subscribe now.

They are words, as Dylan sings, “that glow like burning coals.” In their short breath, we can feel the brute force of the “freight train” Dylan sings about in “Simple Twist of Fate”. Of course, we can also leave the literal or figurative train at the station all together. For many, it’s more powerful to think of Dylan, a man once dubbed a savior and prophet, as having shed his blood across these painful songs – or tracks. Having given something so vital of himself as one’s agony and anguish.

Most critics and listeners consider Blood on the Tracks to be the breakup album to end all breakup albums, attributing the record’s many bruises and wounds to Dylan himself, who was in the earlier stages of a crumbling marriage to Sara Dylan during its writing and recording. Son and musician Jakob Dylan has gone so far as to describe the album as “my parents talking.” However, Dylan has long denied this speculation, expressing “Idiot Wind” levels of frustration at the claims during some interviews and acknowledging the possibility that parts of his real-life pain might’ve seeped into the songs in others.

What everyone seemingly agrees upon is that the album is soaked through and dripping with pain from every groove. A few months after the release, Dylan told Mary Travers of Peter, Paul & Mary in a radio interview that “a lot of people tell me they enjoyed that album. It’s hard for me to relate to that — I mean, people enjoying that type of pain.” But is it Dylan’s suffering that we embrace or the unique outlook and treatment he offers of something as familiar and universal as heartbreak?

While most breakup albums depict their protagonists at their lowest, most broken heap-on-the-floor moment, the songs of Blood on the Tracks treat relationships (and their demise) like a much longer and varied stretch of track. The album awakens with “Tangled Up in Blue”, putting us in mind of a red-haired girl from the past, only to take us through the couple’s story and leave us back in the present with the image of the storyteller setting out to write their next chapter. Dylan credits painter Norman Raeben with inspiring these “time-jumping” songs.

Likewise, “Shelter from the Storm” finds its weary traveler taken in by a woman, with subsequent verses skipping between his departure, additional memories of his arrival, and reflection on their final falling out. In some ways, it’s a more honest depiction of how our minds piece together memories to build a version of the past, but it also allows Dylan to express the idea that the pain he once felt (“Now there’s a wall between us/ Something there’s been lost”) has ultimately led to the gratefulness he later pledges (“I’ll always do my best for her/ On that I give my word”). It’s so rare on this album that any one verse, let alone song, signifies only a single emotion.

Little about the sound of the album itself suggests devastation. There’s certainly a sting to the dirty blues of “Meet Me in the Morning” and a melancholy emanating from both the gentle interplay of guitar and piano on “You’re a Big Girl Now” and the mandolin and organ floating throughout “If You Say Her, Say Hello”. Still, most of Blood on the Tracks opts for acoustic plucking that typically belies this type of subject matter.

The rambling opening of “Tangled Up in Blue” makes us want to strap on our boots rather than wallow in bed, the gallows cabaret of “Lily, Rosemary and the Jack of Hearts” could be playing at this harvest’s barnyard hoedown, and the scathing “Idiot Wind” taps into an anger that one rarely associates with the melancholy heartache of breakup albums. Strange of all might be the bouncing, playfully phrased “You’re Gonna Make Me Lonesome When You Go”, a song that mixes the jubilation of a present dalliance with the disheartening letdown of the inevitable writing on the wall.

But what stands out most of all about Blood on the Tracks remains Dylan’s brutal honesty. While we may never know for certain whom Dylan is singing about or to (if anyone), there’s no mistaking the genuine feelings that are being imparted in these songs. A line as simple as “I’ve got to get to her somehow” (“Tangled Up in Blue”) tells us everything we need to know about the speaker’s desperation and determination. There’s no misinterpreting the vitriol rising from Dylan’s wounds on a line like “You hurt the ones that I love best/ And covered up the truth with lies” (“Idiot Wind”) or mistaking the helplessness as he wails, “I’m going out of my mind, oh oh/ With a pain that stops and starts/ Like a corkscrew to my heart/ Ever since we’ve been apart” (“You’re a Big Girl Now”). Whether or not Dylan has let us glimpse into his own personal life through these songs hardly seems to matter by album’s end. He’s given us a look at something as sincere as anything can be — real or imagined. 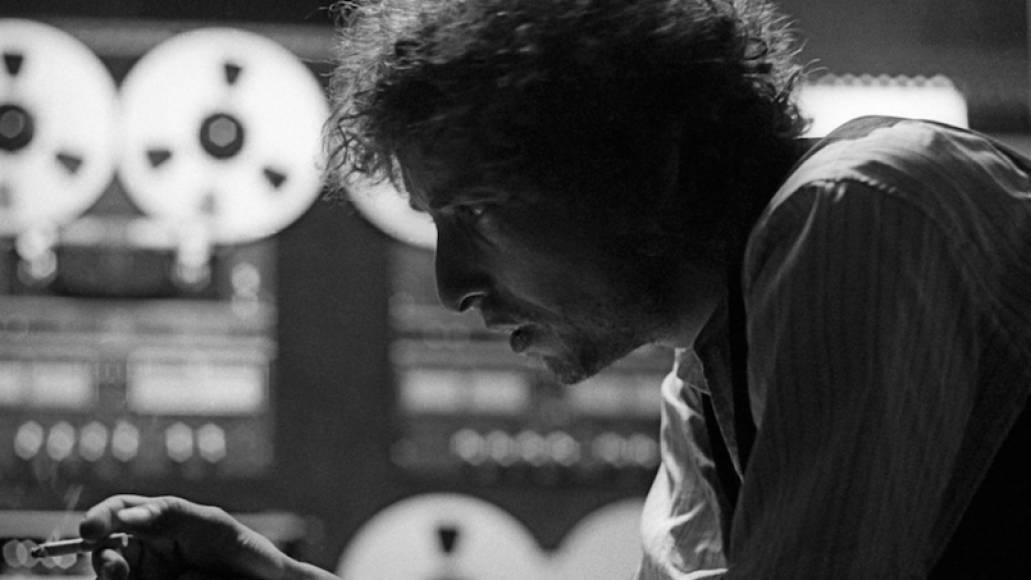 More than 40 years later, we continue to turn to Blood on the Tracks when our own lives turn as messy as the emotions in these songs. It’s an album that understands that pain takes on many different forms while also realizing that our lowest points aren’t that far removed – one way or the other – from our best times. That happiness and pain are part of life’s bargain and inseparable. If Blood on the Tracks was any less painful, it would be dishonest. If it was any less hopeful, it would be pointless.

Essential Tracks: “Tangled Up in Blue”, “You’re a Big Girl Now”, and “Shelter from the Storm”