Whenever Frank Ocean’s Tumblr flickers to life, fans around the world get excited, hoping that new music is on the horizon. Though the crooner returned to the page today without new tunes, he did have something intriguing for fans. Ocean used his blog to promote the midterm elections, encouraging fans in Houston, Miami, Dallas, and Atlanta to participate in the process by offering free merch in exchange for proof of voting.

According to the flyer posted to Tumblr, “cities were chosen in states to support specific candidates.” The post then goes on to list the candidates, and a reason why they are deserving of votes: Stacey Abrams of Georgia would be America’s first black female governor, Florida’s Andrew Gillum would be the state’s first black governor, and Beto O’Rourke of Texas would be the state’s first Democratic senator in 24 years.

(Note that while the Tumblr flyer calls for “a photo of you at the ballot,” selfies in the ballot booth are illegal in Texas, Florida, and Georgia, so a photo at the polling location or a ballot stub is sufficient.) 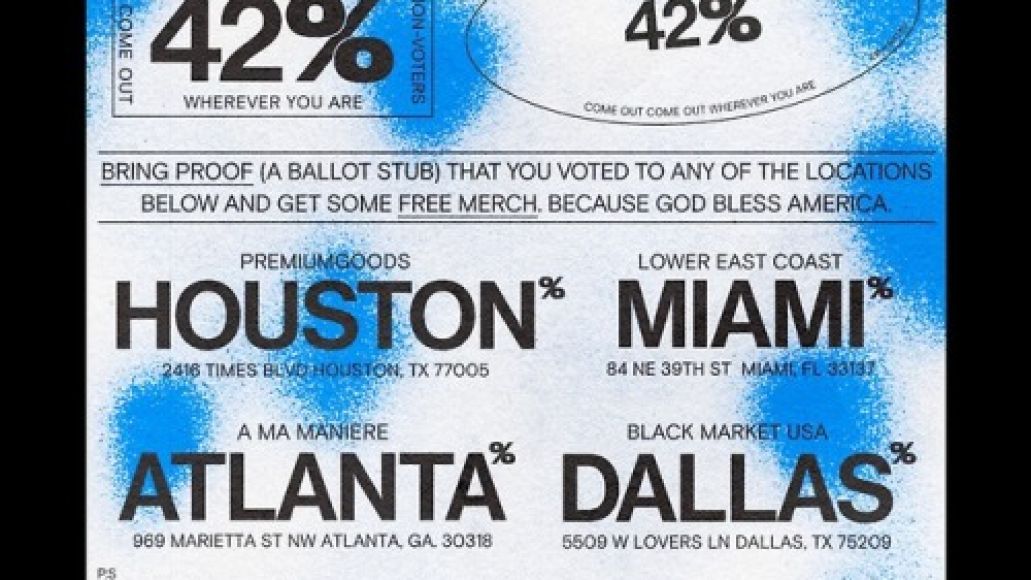 Check out a photo of the merch, which features the “42%” logo and same white-and-blue coloring, below.

In addition to the free merch offering, the notoriously elusive star also shared the latest episode of his Apple Music Beats 1 radio show blonded RADIO. The new release is a special midterms episode featuring music and discussions about the election, #PizzaGate, and other right-wing conspiracy theories. Take a listen at Apple Music. Update: Two additional, midterm-themed episodes of blonded RADIO aired over the court of the day. You can stream them all here.