The gloomy shores of Blackpool in winter. The shades of empire in the walls of Wales’ Penrhyn Castle. A bygone cemetery passed on a train headed away from Paris. The locales that inspired the music of Merrie Land seem to, in the hands of Damon Albarn, portend even darker skies ahead. Written in the tumultuous wake of Brexit, the album may be the first to offer such a vividly impressionistic accounting of the 2016 referendum’s far-reaching (and increasingly unexpected) fallout at home and abroad.

Merrie Land also marks the return of the band known as The Good, the Bad & the Queen, which brings together the creative powers of Afrobeat pioneer Tony Allen, former Verve guitarist Simon Tong, and ex-Clash bassist Paul Simonon. When I caught up with Simonon via phone this week, he told me that, while Merrie Land is definitely a product of its moment in history, it’s also the culmination of more than a decade of slow-simmering collaboration and idea-gathering.

“It was only in the last few years that Damon said, ‘Look, Paul, we need to get a producer because otherwise we’re going to end up in another 10 years with another 50 songs,'” Simonon says. That producer turned out to be the legendary Tony Visconti, who imbued the work of Albarn, Simonon, and the rest with the same widescreen dazzle found on many of his greatest records with David Bowie.

Hear Merrie Land in full below:

For the latest Track by Track, Simonon helps us make sense of the poetry and pageantry of the music world’s latest great British album. Above, listen to our full audio interview for his thoughts on the record’s musical lineage, his home country’s fraught relationship with the rest of Europe, and the peculiar sadness of winter in a seaside town. A condensed, text-based preview is below.

“Introduction”/”Merrie Land”:
[The record] really started out, in a way, as a pilgrimage around the country. We spent time in Blackpool, and Damon went out on some trips to other parts of the country, so it’s really responding to being outside of London. London can be a bit of a bubble of coziness, so once you’re outside, it’s a bit more real. […] Really, the title track is sort of an introduction into our world, where we live, and to Great Britain and England today. Not in the literal sense, but you know.

“Gun to the Head”:
[“Gun to the Head”] is done in a very vaudevillian, music hall style. In some ways, it’s actually quite Ian Dury. It’s sort of quite Kinks, which is sort of a traditional mode of expression. […] It’s a more upbeat song, maybe, than “Merrie Land”. […] It wasn’t deliberate, like, let’s not play any rock and roll. It was played naturally and organically. Everyone contributed in their way. Simon’s guitar, he doesn’t really play power chords. He writes from what I would call the Joe Meek school of music, which is about color. […] I sometimes say it’s like rock and roll never happened, but reggae did. 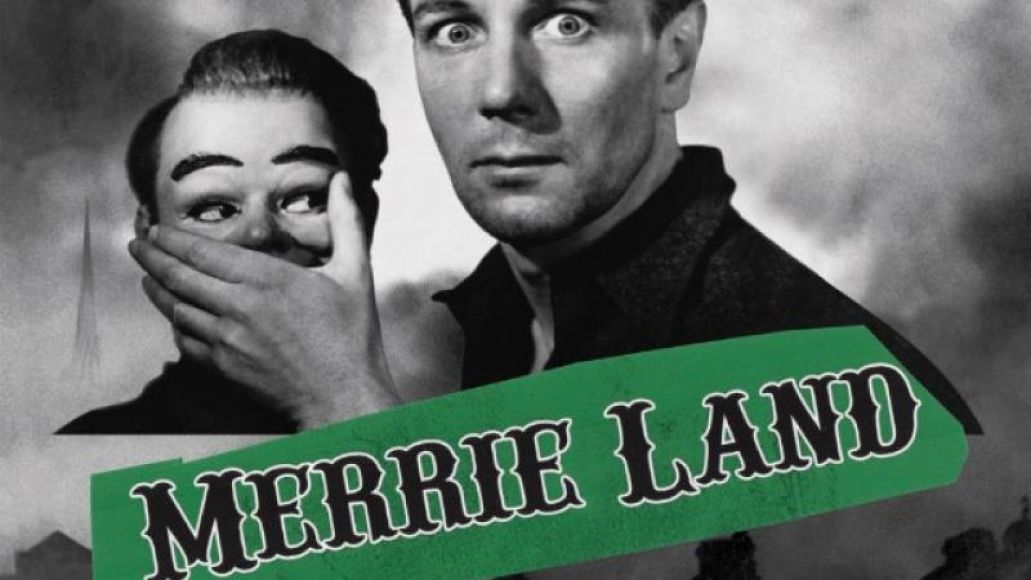 “Nineteen Seventeen”:
There’s two ways you could hear the song, in terms of the lyrics. It’s like a letter to someone you’re leaving – you’re leaving somebody or they’re leaving you. In some ways, you could refer that to the present situation we’re involved with with the United Kingdom and Europe. There are parallels there, in some ways.

“The Great Fire”:
[“Great Fire”] is quite a haunted melody, really. Lyric-wise, as well. There’s a lot of references to the town of Blackpool and its environment locally. English seaside resorts in wintertime are pretty melancholic places. They have all the dark skies and the clouds and the rain, but then you have the contrast of these bright-colored lights. […] It’s the facade of a town, like many cities, where on the front, it looks like everything’s fine, but then you go round to the back streets and it’s quite a different story.

“Lady Boston”:
There’s a portrait in Penrhyn Castle, which was built in the Victorian period and mocked, or was designed upon the idea of it being a Norman castle from like 1066. Millions were spent on it, and the people who had it built and owned it pretty much made their money from slavery, and enslaving the local population, and the slate mines . So, this building pretty much came to represent misery to the local people of that town. Even today they have dark memories of it, this haunted building on top of the hill. Within that was this portrait of this girl among many aristocrats. You could almost say she was the Meghan Markle of her time.

“Drifters and Trawlers”:
In some ways, [our lyrics] are self-explanatory, but then that’s the thing about poetry. People can read different things into it, or get something different each time a different person reads it. It allows for an open discussion, if need be.

“The Truce of Twilight”:
[“The Truce of Twilight”] is an interesting one, because it’s got quite a menace to it, and the lyrics do refer to “famous goodwill being dumped in the fly-tips. It’s sort of a comment on our environment, I suppose. People generally have this nostalgic, sentimental idea of Merrie England, or Olde England, and I guess to some it was merry, but it’s a nostalgia for a past that never really existed like people imagined. That’s probably why some people voted to leave Europe, because they wanted it to go back to […] the local village green, and duck ponds, and people playing cricket. That’s not really real. It’s not really realistic. It’s a dream of the past, and that’s all it is.

“Ribbons”:
[“Ribbons”] is probably the one closest to English folk music, I guess you could say. But modern.

“The Poison Tree”:
It was quite difficult to figure what song to put at the end, and there were a few other songs that we’d recorded that didn’t make the album. Just by chance, we tried it in the running list, and we put “The Poison Tree,” and it seemed to work perfectly. In some ways, it’s actually quite optimistic after the journey that we’ve been through via the record.

The Good, The Bad & The Queen give Track By Track breakdown of new album, Merrie Land: Stream