Track by Track is a recurring new music feature in which we ask a band or musician to discuss the stories behind each track on their latest release.

Most bands never get to celebrate their 25th birthday, and even fewer get to do so while their members are all still under 40. Hanson is one of those lucky few. Brothers Isaac, Taylor, and Zac marked their silver anniversary in 2017 with a well-earned rite of passage: a greatest-hits collections.

While Middle of Everywhere: The Greatest Hits gave fans the chance to reevaluate Hanson’s quarter-century of musical output, it represented only part of the band’s anniversary celebration. The second part arrives today in the form of String Theory, a double album of symphonic arrangements that adds a new, classical-minded twist to Hanson’s catalog.

When I catch up with Taylor Hanson over the phone, he admits that working with a symphony was one of the top entries on the band’s post-anniversary bucket list. He’s also aware of the indulgence factor.

“It’s logical, right, that in 2018, when people aren’t buying records, we should make a double symphonic record?” he asks with a laugh.

(Read/Listen: Taylor Hanson on Adding Strings to “MMMBop” and Touring with a 50-Piece Orchestra)

Fortunately for fans, String Theory never stoops to the level of a simple cash grab that such reimaginings records often plumb. You’ll find the hits here, sure (including joyful takes on early smashes like “Mmmbop” and “Where is the Love”), but they’re outnumbered by tracks sourced from the band’s vast collection of EPs, many of which were recorded specifically for their loyal fanclub. Taken together, these songs stitch together 25 years’ worth of music into a retroactive concept record, one which tells the epic, almost operatic tale of a boy’s journey through the music world that often mirror’s the band’s own biography.

Along the way, the band finds a freshness in these 23 tracks, often thanks to the deft arrangements of veteran composer David Campbell. Listeners find themselves looking backwards and forwards at the same time, simultaneously appreciative of the band’s longevity and excited for whatever comes net.

For the latest Track by Track, Hanson talked us through the epic journey contained within String Theory.

“Reaching for the Sky (Part 1)”:
The show is really built around a lyric, and telling a lyrical story. […] This particular character’s perspective at the beginning is one that we resonated with as we began our career years ago. […] You’re always surrounded by doubters, and this character is saying, “No, I really believe. I feel called to something. You don’t have to understand it, but I feel called to reach. It’s who I am.” It’s beginning the story to say that this character is setting out on this impossible quest, and immediately he’s articulating both the clarity of his vision and the clarity of conflict and doubt that’s surrounding him. […] It’s the preamble that gets you into this story.

“Joyful Noise”:
With “Joyful Noise,” you now get some energy, you get some pace. Now he’s walking, now he’s going. The orchestra steps in, and the drums step in, Zac takes the lead vocal, and it’s almost like the first footprint of the show. […] [The boy] is saying, “Make a joyful noise.” His vision is to put that into the world. That’s his actual message versus his aspiration: “I want to put this energy into the world.” So, the journey begins on that song.

“Where Is The Love”:
Our collaboration with David [Campbell] really did point out that we could deconstruct things, and by having a symphony, it allowed us to do things with a song that you would never do. One of my favorite parts of “Where Is The Love” is the verse melody; it has a slightly bluesier tone to it that, on the original recording, is very wall-to-wall. […] You don’t necessarily hear the vocal melody as clearly. What I think of [this version of] that song doing musically is beginning to really cement the harmony. The first almost minute of the song is now three voices harmonizing, leading towards the chorus, and then the symphony bringing in further girth and wrapping around it.

“Dream It Do It”:
“Where Is The Love” gets really high, and we knew, as we were putting together the puzzle pieces, that once you get the high — the listener is more likely to know this song, it’s extremely rhythmic, it’s got this big chorus — it’s like, where do you go from there? Is it going to be too much too early? […] What do you say after that? […] The “Dream It Do It” idea was first written thinking about another project, which was not one we were even going to perform in. It’s obviously completely, just — “Dream it, do it?” Come on. It’s like, who says that? But the verses of that song are so right on point in talking about what it means to dream and actually do it, talking about the work and the heavy lifting and the resolve, and musically, it was built around this extremely triumphant, almost Chariots of Fire melody. Once we were surveying the potential ideas […] that melody was like an “a-ha!” […] The transition could be seamless.

“Mmmbop”:
[Our relationship with “Mmmbop”] is a healthy relationship. [laughs] We’re still together. “Mmmbop” clearly is the song people know Hanson for the most, and it was such a hit at a level that few people get to have in their career, so the decision to include it or not was one of the questions. Honestly, it didn’t become crystal clear to me that it absolutely needed to be in the show until we put “Dream It Do It” and “Where Is The Love” in that moment. We were allowing ourselves, at that point, to use “Mmmbop” for its story and for the core of its identity, not necessarily for how everyone knows it. […] To us, it was a campfire song. […] There’s actually a sort of warmth and almost subtle melancholy to that song, which is part of why I think it’s lasted with our fans.

“Chasing Down My Dreams”:
“Chasing Down My Dream”, musically, is like the road trip. We’re still driving. There’s pace to it. It’s almost kind of Americana, straight ahead. Zac goes to the guitar, I’m playing drums, Isaac’s on the piano. It begins to articulate further what this journey’s looking like.

“Tragic Symphony”:
“Tragic Symphony” is the only song that has a sort of romantic flair to it. […] What it’s saying is that, ok, you’re going for your dream, you’re putting yourself out there — now, what goes with that is the toxicity and the dark side of getting what you want. You’re addicted to it, you’re enamored with it, and you can’t get out of it. You can’t turn your back on this path you’ve chosen. […] Musically, what backs it up is, you know, it’s a little bit more of a bluesy riff, there’s more intensity to it. […] You’re hearing Latin percussion begin to show up, you’re hearing more rhythm. It’s starts to get a little more muscle. There’s a little more shadow surrounding the music.

“Got A Hold On Me”:
The transition from “Tragic” into “Got A Hold On Me” is probably my favorite purely arrangement moment, because the brakes just get slammed on. “Tragic Symphony” is very syncopated, and it’s just driving, and at the end of the tune […] the beats per minute are almost cut in half, and everybody hits these beats, just “dap-dap! dap-dap!” and it drops down into this section called “Thieves and Liars”. It’s almost like a bad James Bond theme. 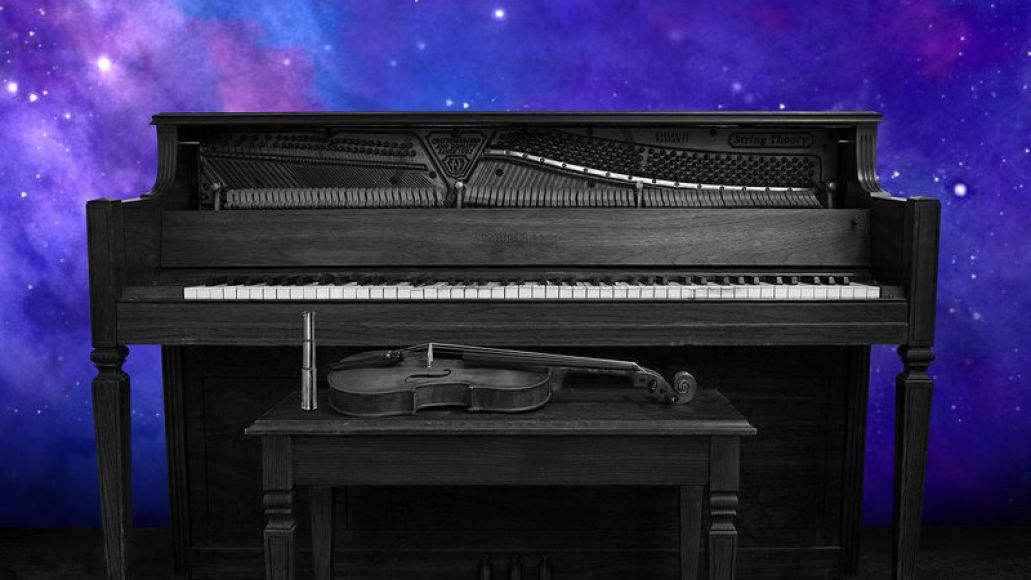 “Yearbook”:
We needed to stay down and dark longer during this part of the show, and reemphasize the downward shift in the show and in the story. “Yearbook” has that feel to it. Of all the songs, it’s probably the most out of touch with our current perspective. It’s very much a youthful look at loss of innocence. […] It had almost a different level of power, because it had a history. […] Lyric-wise, and musically, it gave us something that was hard to achieve. It was hard to find the right song. We would’ve written, from the very beginning, a new song if we didn’t feel like that one achieved the goal at that point.

“Siren Call”:
[“Siren Call”] was written with the sound of strings at its heart. […] The Mellotron [used on the original] is awesome, but one of the cool things about it musically is that [this version] is symphony and vocals. Drums are in there as well, I guess, but we’re not playing any other instruments outside of that. We sort of gave the music to the symphony.