This article originally ran for Thanksgiving 2015. We’re reposting it because, frankly, we’re starving.

A long time ago in a galaxy far, far away … I was a fat kid. Not only a fat kid, but a nerdy fat kid, which meant I was awful at everything that kept you from being a fat kid — like sports. But, when it came to pop culture and food, you’d have a long-winded review from moi, typically consisting of childish big words like “exemplary” or “phenomenal” or anything else that meant the same thing but sounded supremely different.

One of my favorite pastimes, though, was matching food with films. If I put on Teenage Mutant Ninja Turtles, I’d want to order a pizza and probably from Pizza Hut. The same goes for Coneheads with Subway. Or Ben and Jerry’s with City Slickers. Twinkies and Ghostbusters. Burger King and Back to the Future. Oh god, I really was duped and brainwashed by on-screen marketing. Goddamn suits and their savvy ways!

Fortunately, I’ve since sworn off fast food as an evil on par with the Galactic Empire (okay, calm down, Mike) and have come to appreciate the more legitimate offerings that filmmakers have captured on the silver screen. Even better, I’m not the only cinephile with a rumbling stomach, a sobering realization I’ve come to this week as our film staff shares their favorite on-screen meals before they head out to drown in gravy.

So, dig in and share your own cinematic recipes below.

The brothers are preparing a big meal in Big Night in the hopes of impressing the great Louis Prima, who is due in at any moment. That’s important to the plot of the film, but not me. No, no. The presentation of the Timpano is as important as its taste, as we discover when Secondo and Primo (played by Stanley Tucci and Tony Shalhoub, respectively) slap away the hands of a young Mark Anthony. But we’re here for what’s inside. The pasta. The salami. The mozzarella. The meatballs. Screw cultural sensitivity: Mama Mia! –Justin Gerber

At its core, the Chocolate Room in Willy Wonka‘s “Pure Imagination” sequence is an edible forest, overgrown with giant gummy bears hanging from trees, pumpkin-sized eggs filled with fudge, and buttercups that are actual cups of sweetened butter (or maybe it’s just tea). But the non-edible environs are just as important. Working-class fixtures such as steel-frame windows, industrial pipes, and brick walls remind you that this is, at the end of the day, an actual factory, and it’s that realistic, blue-collar setting that brings an otherwise fantastical world so close that you can actually taste it. –Dan Caffrey

Talk about an extravagant meal: Moules marinières, pâté de foie gras, beluga caviar, eggs Benedict, a leek tart, frogs’ legs amandine, and quail’s eggs with puréed mushrooms. Then, mix all of that in a bucket and put quail eggs on top with a double helping of pâté. And that’s the starter. For dinner, it’s jugged hare, with a sauce of truffles, bacon, Grand Marnier, anchovies, and cream. To drink? A case of brown ale and a whole lot of champagne.

And that’s a light meal for the balloon-like Mr. Creosote.

Monty Python & The Meaning of Life presented the creamiest, most disgusting, and downright daunting meal ever put to film. And it looks insanely delicious. Well. Insane, really. But this is peak French cuisine right here.

DO NOT eat the after dinner mint, or bodily explosion may occur. –Blake Goble 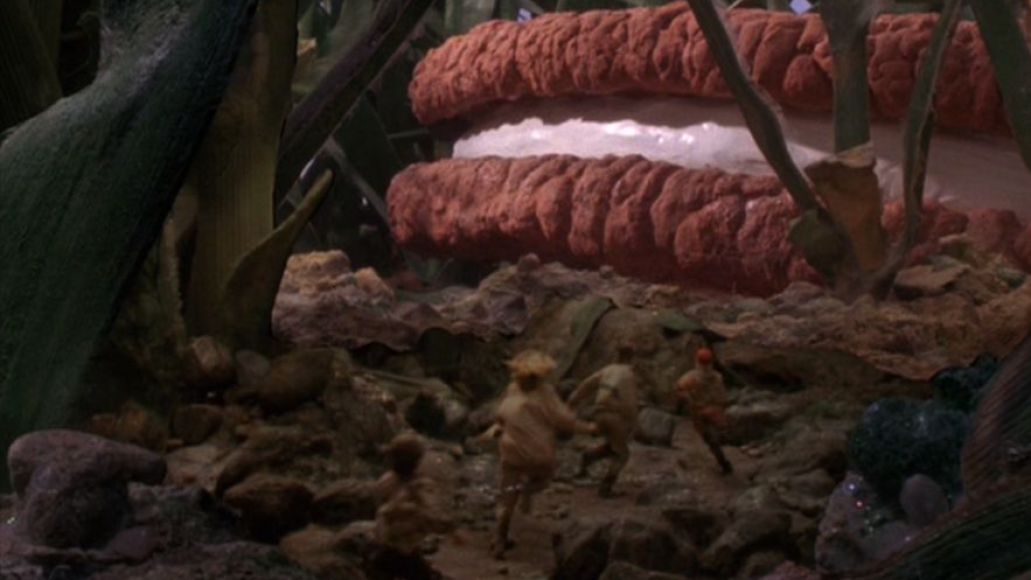 Imagine your favorite Little Debbie snack cake blown up to the size of a house: eating that ooey, gooey cream filling by the armful, cracking off crumbs of soft oatmeal cookie the size of your head. If you’re drooling right now, then you probably also saw this scene from Honey, I Shrunk the Kids as a child – in which the films’ titular tots happen upon (by Zeus’ design, apparently) a gargantuan, unwrapped Oatmeal Cream Pie in the front yard of their house. Little Debbie’s marketers pray they could make their snacks look this appetizing today. –Clint Worthington 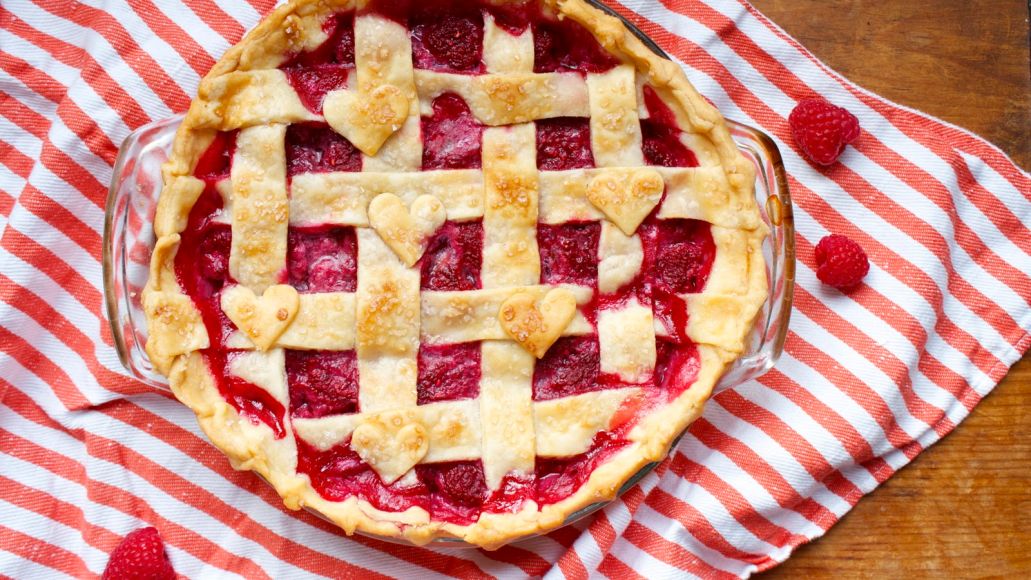 Pie is the leitmotif of this delectable indie, as small-town diner waitress Jenna (Keri Russell) bakes pies to match her moods and titles her creations accordingly.

There’s the I Hate My Husband Pie (“You make it with bittersweet chocolate and don’t sweeten it. You make it into a pudding and drown it in caramel…”) to illustrate her disillusionment with deadbeat husband Earl (Jeremy Sisto); the Pregnant Self-Pitying Loser Pie (“Lumpy oatmeal with fruitcake mashed in. Flambé, of course…”) when Jenna discovers that Earl has knocked her up; and the I Can’t Have No Affair Because It’s Wrong and I Don’t Want Earl to Kill Me Pie (“Vanilla custard with banana. Hold the banana…”) as Jenna finds herself falling for her OBGYN, Dr. Pomatter (dreamboat Nathan Fillion).

The pies are shot from above as they come together, ingredients spilling into bowls and molds with vivid, dare I say food-porny exactitude. And the results – such as the Fallin’ in Love Chocolate Mousse Pie that Jenna bakes for her lovesick friend, or the Jenna’s First Kiss Pie that Jenna’s mother once made for her – kindle the heart as well as the taste buds, as all good desserts should. –Leah Pickett

Despite all evidence to the contrary – and all rationality – I choose to believe that the events portrayed in 1999’s political teen comedy (!) Dick are all completely true. Deep Throat really was two teenage girls. The secret behind the missing minutes from the Watergate tapes really was Olivia Newton-John-related. And Nixon and Brezhnev’s historic treaty really was brokered over a tin filled with accidentally spiked Hello Dollies. Surely nothing else could have melted the cold war quite as well as a batch of delicious and illicit cookie squares filled with nuts, chocolate chips, sweetened condensed milk, and an older brother’s secret stash. –Sarah Kurchak

Cool guy Tony Manero may have questionable taste in music, but his pizza game is unimpeachable. The opening scene of Saturday Night Fever finds Tony strutting through Brooklyn to the tune of the Bee Gees’ “Staying Alive”, but the movie doesn’t truly start until he gets his ‘za on. When our guy rolls up to the window at Lenny’s Pizza, he proceeds to order two slices and stack them one on top of the other, creating a DIY pizza lasagna that belongs right next to “fries on the burger” in the Fast Food Hall of Fame.

It’s one of the most inspirational food moments in all of modern cinema, and it’s gone as fast as the D train. But the best part is the woman at the counter, who greets our hero with “Hiya Tony! Two or three?” From this brief interaction, we can only infer that SOMETIMES HE ORDERS THREE. Is a triple-stacked slice of pizza even pizza anymore? What is real? In any case, Tony’s dance moves seem all the more impressive when you account for that cheese bomb in his gut. —Collin Brennan

It’s not where Pulp Fiction starts in the chronological sense, but the incident inside Brett’s apartment ends up setting in motion one of the film’s most interesting running motifs: Jules (Samuel L. Jackson) and his quest for enlightenment after miraculously avoiding a hail of bullets. And it all comes after he chows down on one of the finest burgers available in Los Angeles, the Big Kahuna Burger. It’s the cornerstone of any nutritious breakfast. —Dominick Suzanne-Mayer

True story: At the 2014 South by Southwest Film Festival, I hadn’t eaten much throughout the day and figured, “What the hell? I’ll eat after a few flicks.” Bad idea jeans when the first movie was Jon Favreau’s flavorful indie comedy, Chef. As the titular hero, Carl Casper, Favreau spends each scene either in kitchens or fresh markets or food trucks deeply focused on some of the most savory meals to ever hit the screen — from sliced meats at Franklin Barbecue to Pasta Aglio e Olio at home with ScarJo to his successful Cuban sandwich, I just … wanted … to die. But, I’m an idiot; I should have known that Favreau tends to stuff food in every one of his films. The late night breakfasts in Swingers, the dirty spaghetti in Made, Iron Man’s obsession with Burger King, it’s all there. But as a child from South Florida, that food truck felt all too real to me. Hopefully it will be. –Michael Roffman

I didn’t starve in college. Far from it. Actually, during my first week at Purdue University, I won 50 free Papa John’s pizzas in a contest sponsored by my credit union. (Freshman 15 clinched!) Still, that didn’t stop me from regularly daydreaming about Robin Williams’ invisible dinner with the Lost Boys in Hook. It’s the scene that taught us, among other things, that if we use our imaginations, food can miraculously appear on our plates. And we’re not talking a Hot Pocket or a Pop-Tart. We’re talking a full Neverland-style, all-you-can-eat smorgasbord with all the trimmings. The only problem I had with the meal was the food fight – such waste! But I guess when you’re cooking with imagination, the next feast is never far away. Ultimately, my imagination never quite filled my plate, so I had to actually drag myself to the phone and order a free pie. The pizza sufficed, but it wasn’t quite bangarang. –Matt Melis

The Tastiest Movie Food We'll Never Get to Eat