Note: This review is based on the first few episodes of Season Six.

The Pitch: House of Cards captured the public’s imagination, both in Britain and later on in America, as a winding, sordid, and even murderous chess match to seize and maintain political power. It allows audiences the dark, escapist pleasure of seeing their government and its cockroach-like occupants as even more corrupt and dangerous than they already imagine them to be.

However, the last season and upcoming sixth in the American series will have hardly aired in a vacuum. As Season Five approached, critics and viewers alike wondered how compelling the Underwoods would appear once a comically coiffed snake oil salesman and his umpteenth wife moved in at the real 1600 Pennsylvania Ave. And now, despite nearly a year’s notice and a Season Six trailer that paints America’s new president, Claire Underwood (Robin Wright), as being arguably the series’ most ruthless agent of all, too much of the media’s attention will still no doubt be cast upon the shamed ex-president no longer holed up in a nearby hotel (dead, in fact) due to Kevin Spacey’s well-publicized transgressions.

That is, unless the show is just that damn good — something it hasn’t been for a couple seasons now. 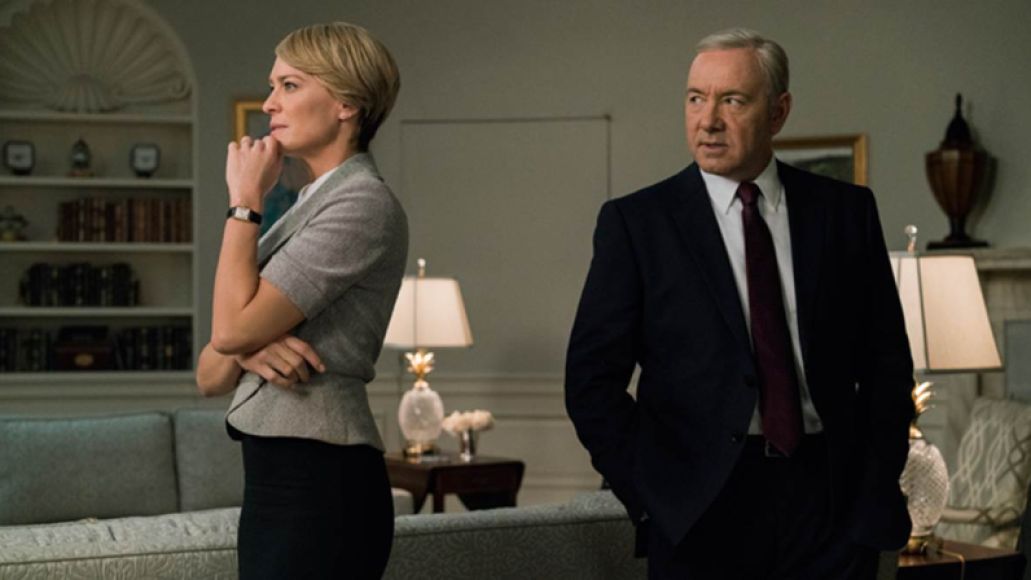 #MeToo Kudos: Once Spacey became the most high-profile actor to be called out by the #MeToo movement, there was reason to believe that fans of the series had seen the last of the Underwoods. However, Netflix was wise enough to part ways with Spacey but also understand that America’s House of Cards had yet to properly topple. As fascinating as Francis J. Underwood has been as a conniver, conqueror, and survivor, he hasn’t been as compelling or surprising as his co-conspirators, Claire and Doug Stamper (Michael Kelly), or his crusading journalist menace, Tom Hammerschmidt (Boris McGiver), for quite some time now. Couple Frank’s predictability with muddled season arcs around the election and way too much time spent on fairly inconsequential (only to be offed) characters like Tom Yates (Paul Sparks) and Leann Harvey (Neve Campbell), and the series was long past due for a deep breath and reset. Fans of the British series will recall that the woman behind the power ultimately called (and ordered) the final, literal shots. Claire getting the chance to outlast her partner feels like a continuation of that idea — one that Americans are more than primed for in 2018. 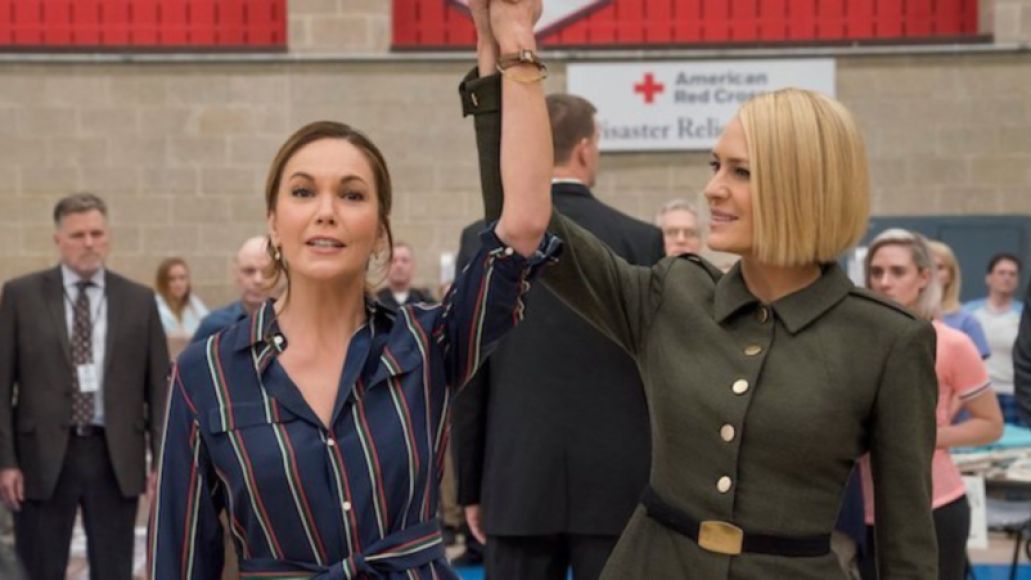 Claire’s Turn: “My turn,” Claire declares to the camera while standing in her black running suit behind the president’s desk in a dark Oval Office. That’s how Season Five closes, and it’s as good a synopsis of Season Six as one could write. It’s also an era that we’re absolutely ready for. Claire remains by far the most mysterious character in House of Cards. While we long ago learned of some of the soft spots in Frank’s armor, Wright has been able to bring Claire to the brink of tenderness one moment — making us wonder how a young Texas deb once got swept up in her future husband’s world of slick handshakes and power grabs — only to show her as heartless, cruel, and even murderous the next. We still don’t quite understand what makes Claire tick, and, far more interesting and potentially horrifying, we get the sense that Tom Yates’ death doesn’t exhaust the limits to which she’ll go. Not even close.

Claire has always described herself as “boxed in” — by her wealthy upbringing, by relationships, by always being the power behind the man, and, as we learn, even by the title “Madam President.” Claire’s struggle to finally climb out of that box — and by all indications, torch it afterward — will clearly be at the thematic heart of Season Six. In early episodes, she’s hyperaware in all situations that she is a woman among men who are unaccustomed to dealing with powerful women. She’s also cognizant of how her new political enemies (more on them to come) try to get the upper hand by attempting to push her back into the long shadow cast by her late husband. While Claire Underwood may only be a character in a television political thriller, Season Six has definitely made it a point to speculate on some of the additional obstacles a first female president might have to endure. It’s a smart angle that wasn’t available when a man was in charge. Besides, who won’t enjoy when Claire slips Frank’s ring on and gives the middle finger? 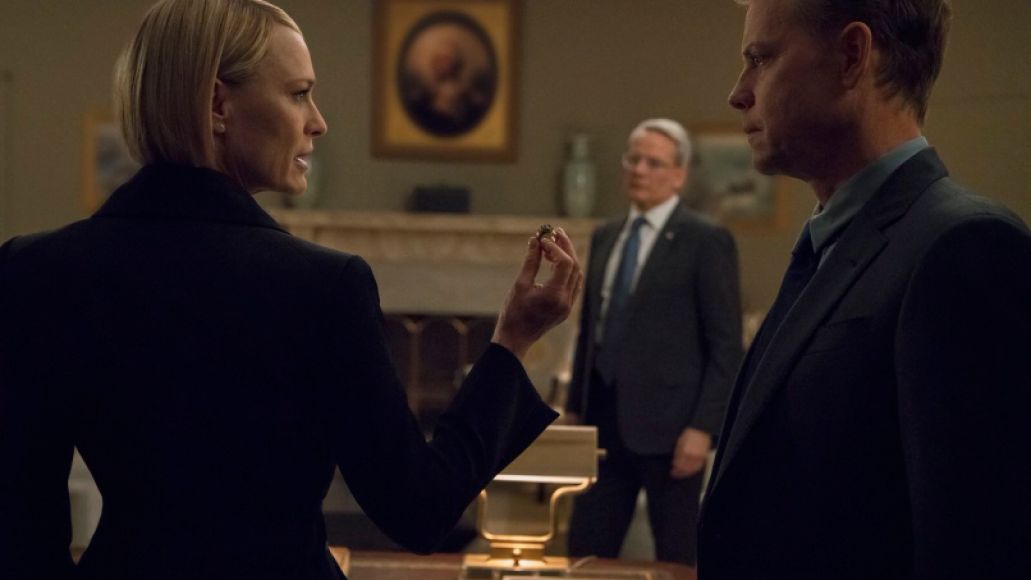 Big Questions: Season Two masterfully pits Frank against billionaire Raymond Tusk in a back-and-forth whose outcome seems uncertain right up until Frank raps his ring twice on the Oval Office desk. Season Six attempts to provide Claire with an equally formidable opponent in the Shepherds — Bill (Greg Kinnear), his sister Annette (Diane Lane), and her son Duncan (Cody Fern) — a powerful family in the chemical business who stand to benefit if Claire will pass legislation lax on regulations. It might be a bit much that Annette and Claire’s rivalry goes back to adolescence and that they cattishly get under each other’s skin or that Bill is the type of misogynist who not only needs Claire to sign his bill but must also guide her hand just to rub it in and assert his dominance. It’s also fair to wonder if, unlike in the Tusk saga, too many cards have been revealed far too early in the game. It remains to be seen just how much trouble the Shepherds are capable of causing. We hope a lot.

What also remains to be seen are how the Doug Stampers, Cathy Durants, Tom Hammerschmidts, Nathan Greens, and, surprise, surprise, Janine Skorskys — the surviving collateral damage of Frank and Claire’s ascent — will factor in as the new president steers the country forward. Each knows too much to ever entirely escape the new president’s orbit, and now with Frank mysteriously dead, a couple of these characters seem to be in search of the same answers rather than at odds with each other. There need to be big payoffs here, and spoiler alert: one doesn’t survive the third episode. 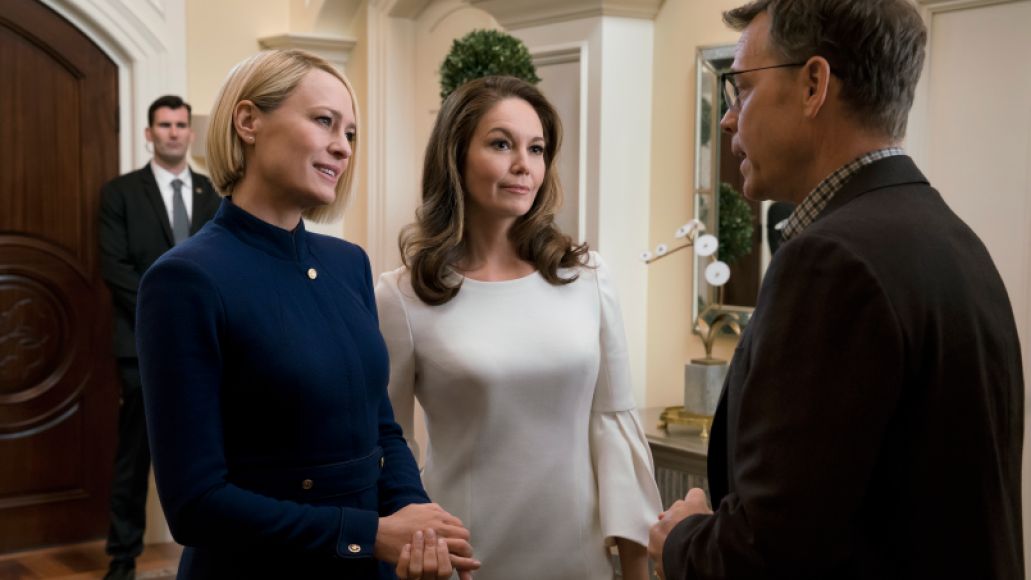 Verdict: Nothing in the first handful of episodes will make you want to pause or second-think Claire’s presidency. Wright’s character, originally little more than a confidant and smoking chum for Spacey’s, now has the depth to carry most scenes and even break the fourth wall to deliver a particularly pointed or scathing line. However, the question remains if she’ll tango with the Shepherds as rivetingly and diabolically as her husband once did with Tusk. How other fascinating characters — particularly Doug Stamper — enter into that dance will also add to or take away from the season’s success, but make no mistake about it: House of Cards now entirely hinges on Claire Underwood’s approval ratings.

After all, it’s her turn.

Where’s It Playing?: The entire sixth season is available Friday 11/2 streaming on Netflix.