The Fenway faithful were out in full force on September 2nd.

The Red Sox were paying a visit to the Chicago White Sox for a quick weekend series, but the legendary ballpark was playing host to a band that has long-been heroic to many, even those of us on the opposite coast. Pearl Jam’s ascent to its standing as the great rock band of its generation (a telling title for an era so musically defined by guitars, bass, and drums) can be traced from small clubs to arenas and, over the past decade plus, hallowed sports shrines like Fenway Park and Wrigley Field. Lesser bands would easily get swallowed up in the history and mythology stored away in such places. But on this night, the first of two sold-out Boston shows, the band once again proved its ability to make any place with a stage its home.

Songs as old as “Release”, “Why Go”, and “Oceans” continued to connect with fans, let alone generational anthems such as “Jeremy” and “Alive”. Eddie Vedder further cemented his status as a masterful crowd worker, donning and performing in a fan’s homemade Sox jersey without it coming off as lame or pandering. His cover of Tom Petty’s “I Won’t Back Down” was perfect for a band that has never backed down from anything, not to mention a fitting tribute to a late icon who took the same stage at Fenway almost four years earlier to the day. Whether the three-plus-hour spectacle was your first Pearl Jam show or your tenth, you left feeling you watched something special. Anyone watching any other band on any given night would be so lucky as to feel the way fans do leaving a Pearl Jam show.

Consequence of Sound’s Band of the Year did not spend 2018 in an album cycle, and it hasn’t been in a true one for more than five years. They are living in an age in which popular music continues to move further and further away from the rock and roll paradigm in which they operate. They exist with little or no regard to the musical climate and landscape around them. And yet none of that matters.

In 2018, Pearl Jam somehow managed to be both one of the biggest bands on the planet and also one of popular music’s proudest outsiders. Every bit the rule-breaking iconoclasts they were in 1992, they do what they want how they want to do it, complete with a commitment and earnestness that’s lost on bands more than half their age. Rock is dead, some say. But if that’s the case, Pearl Jam is still the band in arguably the best position to resurrect it. They are, as they have been for many years, still among the very best bands in the world.

“To see a whole show by Pearl Jam, holy shit, I’d go see them every time now,” says Buffalo Tom frontman Bill Janovitz, who watched both of the band’s Fenway shows from wings of the stage. “I wondered what I was doing not going to see them all those years.”

Janovitz brings a unique perspective in evaluating Pearl Jam’s sustained run of rock and roll dominance. Buffalo Tom shared a bill with the band in 1991 for a Boston show sponsored by now-defunct WBCN, this just months before the release of Ten. Janovitz kept sporadic touch at best with the band over the years, but even that loose connection warranted a text from Vedder on the eve of the Fenway shows.

Vedder has gone on record about his admiration for Buffalo Tom. About two years prior to the Fenway shows, Janovitz and Vedder linked up courtesy of a mutual friend, current Cubs and former Red Sox general manager Theo Epstein, for Epstein’s annual Hot Stove Cool Music fundraiser concert at The Paradise. There, Vedder told concertgoers how he had played “Taillights Fade”, from Buffalo Tom’s 1992 release, Let Me Come Over, on repeat while on tour with Pearl Jam in the band’s earliest days.

“That band, they’re very pro,” Janovitz says. “They’re real players. There’s a powerhouse engine in them. They’re just a really well-oiled machine. I just went with it. I didn’t try to steer their arrangement of it or overthink it too much. So by the time we played it with the crowd there, it was literally awesome.”

The fact that Vedder still remembers a song that brought him comfort more than 25 years ago is telling, and it’s no doubt part of the secret to Pearl Jam’s success. Through it all, the band have never lost sight of the people and things that have helped them get to where they are. It would be easy and almost understandable for them to do so, but Pearl Jam is the rare monolithic band still grounded by its punk rock ideals. It’s why wherever they go, they extend an olive branch to their friends and heroes: Janovitz in Boston, Robert Pollard in Dayton, Neil Young in Toronto, to name but a few. When the band played a run of hometown shows this summer at Seattle’s Safeco Field, it was Mudhoney’s Mark Arm and Steve Turner that got the call.

“It was amazing, and it usually is at Pearl Jam shows,” says Arm, whose relationship with band members Jeff Ament and Stone Gossard dates as far back to their days in the Seattle proto-grunge band Green River. “Their fans love Pearl Jam. You’d be lucky to have an audience that’s that impassioned and into it.”

Robin Chan is just one of the band’s many fans whose loyalty can be counted not only in years but frequent flyer miles. He has seen Pearl Jam perform 19 times, mostly in his native Massachusetts but also in Chicago, Seattle, Berlin, and Stockholm. “I’m kind of spoiled by them,” he says. “I expect other bands to put on shows like they do, with 10 songs in their encore and stuff like that.”

True enough, it takes seeing Pearl Jam live to fully understand why the band is so unique. Few bands in music history approach their shows like singular opportunities to create a special experience. In 2003, the band delivered on a promise to perform every song in their catalog over the course of three consecutive shows in Mansfield, Massachusetts. Chan, who attended those shows, recalled how the band also opened up for themselves on those nights, playing acoustic sets of songs that they would not be playing later in the evening. 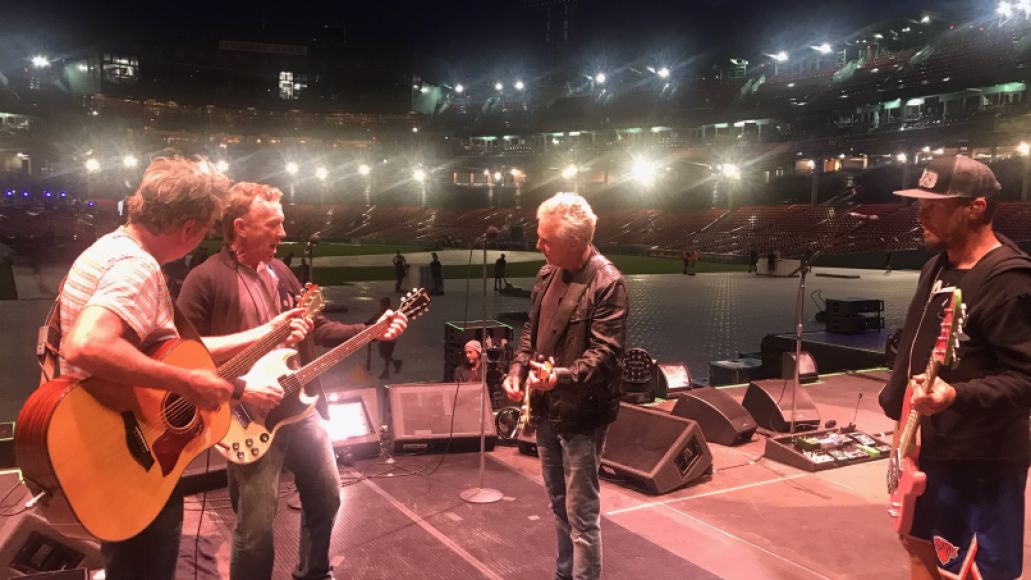 That’s but one example of the band’s live commitment, but talk to any Pearl Jam fan anywhere and they can tell you similar stories of their generosity. Fans who attended the band’s Wrigley Field show in 2013 will tell you about how they played well past their curfew until 2 AM after a near-three-hour rain delay. Those who saw the band in Santa Barbara in 2003 can probably recall in vivid detail Chris Cornell joining them onstage for a rendition of Temple of the Dog’s “Hunger Strike”.

Arm explains this as a byproduct of a band that even after almost three decades still hasn’t lost its sense of self. “I don’t think those guys take anything for granted, just how lucky they are to be in the position that they’re in,” he says. “They do their damndest to give back.” 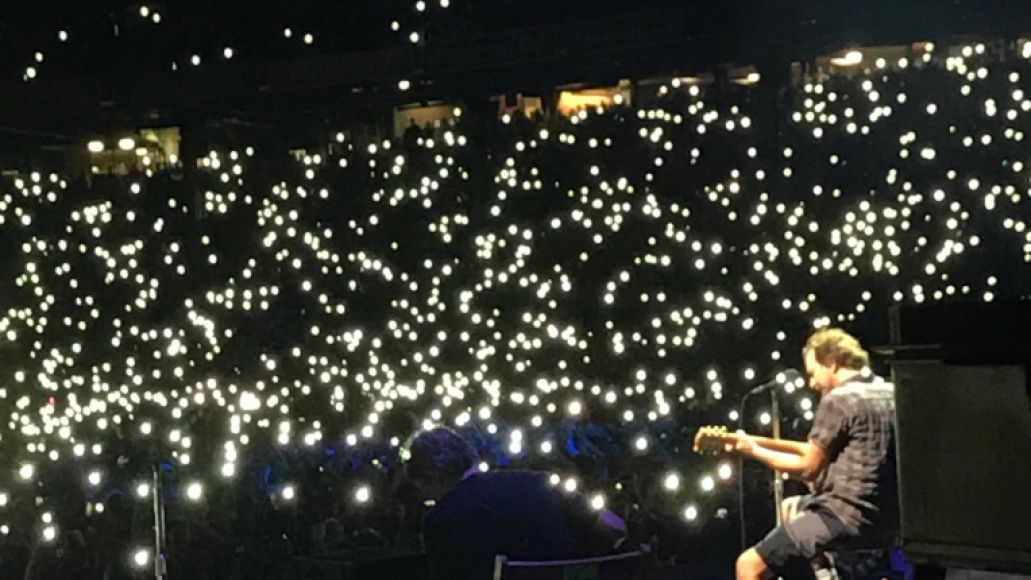 But beyond a catalogue of classic records and legendary live performances, perhaps the thing that resonates most about Pearl Jam in 2018 is the band’s humanity. In a time where partisan political griping continues to bring out the worst in people, Pearl Jam shows feel like increasingly rare opportunities for people to rally around what they have in common instead of what divides them.

“It’s pretty incredible the way they bring people together,” Chan says. “I’ve struck up so many random conversations with fans at their shows. There’s just this genuine love for the band that is palpable. The enthusiasm is contagious.”

“I don’t know how to predict trends in the music business, but I do feel there will always be a desire from music fans to go out and have that large-level communal experience,” Janovitz says.

The band’s ability to unify took center stage during its 2018 Seattle homestand. Alongside more than 80 different businesses and non-profits, Pearl Jam helped raise north of $11 million in support of the city’s homeless population (an advisory board has been charged with determining where and how the money will be spent). It’s an enormous gesture, but also the kind we’ve all come to expect from a band that’s made a career out of taking principled stances. From the now-legendary Ticketmaster lawsuit through to today, Vedder and company are still the quintessential band of the people. In a year that’s largely been short of new rock and roll heroes, Pearl Jam’s generosity of spirit continues to buoy their already-great musical legacy.

A lot has changed around Pearl Jam since 1992. Alternative rock and grunge have long since passed them by. So too, tragically, have many of the band’s peers, from Kurt Cobain and Layne Staley to, most recently, Cornell. But through it all, Vedder, Ament, Gossard, guitarist Mike McCready, and drummer Matt Cameron have stood strong through cultural shifts, tragedy, and potentially career-threatening political stances. Theirs has not been the path of least resistance, but it’s only served to make them arguably the very best at what they do. Any artist looking for the secret to sustained success should delve into this band’s career arc like a study guide.

“I think Pearl Jam, when all is said and done, will be left up there with the giants,” Janovitz insists.

Band of the Year: Pearl Jam Refused to Back Down in 2018