Last year, we presented readers with a study that analyzed social media data to reveal which types of drugs were most closely related to which music festivals. The information gleaned wasn’t terribly surprising, like marijuana being common at Marley Fest or LSD being most popular at Electric Forest. A new study, however, further examines the connection between music and drug culture by revealing which genre attracts the most users.

DrugAbuse.com (via Metal Injection) surveyed 976 music festival attendees (not exactly a quorum), and the results again weren’t always terribly revelatory. The fact that alcohol (a legal drug) and marijuana (an increasingly legal drug) were the most common substances used at music events shouldn’t stun anyone who’s ever been to a festival. Nor should the fact that EDM fans are the most likely to be intoxicated at a show; but the fact that heavy metal heads are second on the list might be a bit of a surprise. 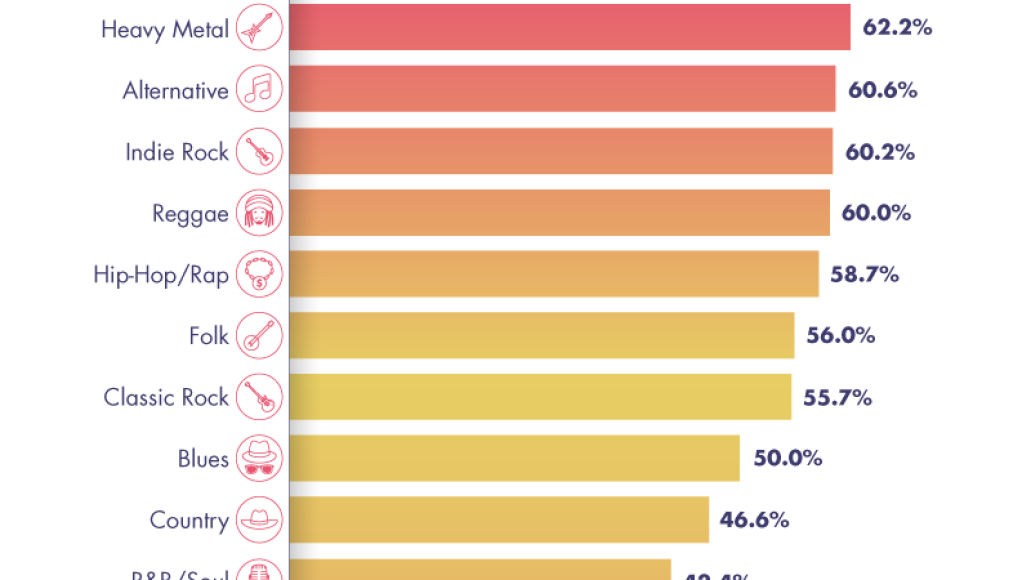 It’s interesting to note that heavy metal fans were only in the top three users by percentage when it came to alcohol, coming in second with 56.2%. (Top honors went to alternative concertgoers with 57.6%, while EDM parties came in third with 54.9%.) Less surprising is the fact that 33.3% of reggae event attendees and 29.6% of hip-hop fans smoked weed, and that MDMA was far more popular at EDM shows (25.6%) than at either of the other top three genres (reggae at 4.8% and indie rock at 3.0%). Perhaps least shocking of all is that EDM concertgoers were listed in the top three users for all drugs (alcohol, marijuana, MDMA, hallucinogens, cocaine, and opioids), except for benzodiazepines.

That actually lines up with the festival study from 2017. In that study, cocaine was most popular with attendees of Tomorrowland and Mad Decent Block Party, while MDMA was common at MDBP and Electric Zoo. Marijuana was, naturally, a favorite of Marley fans and Camp Bisco attendees, while alcohol took over a big percentage of Summerfest and Ozzfest users. 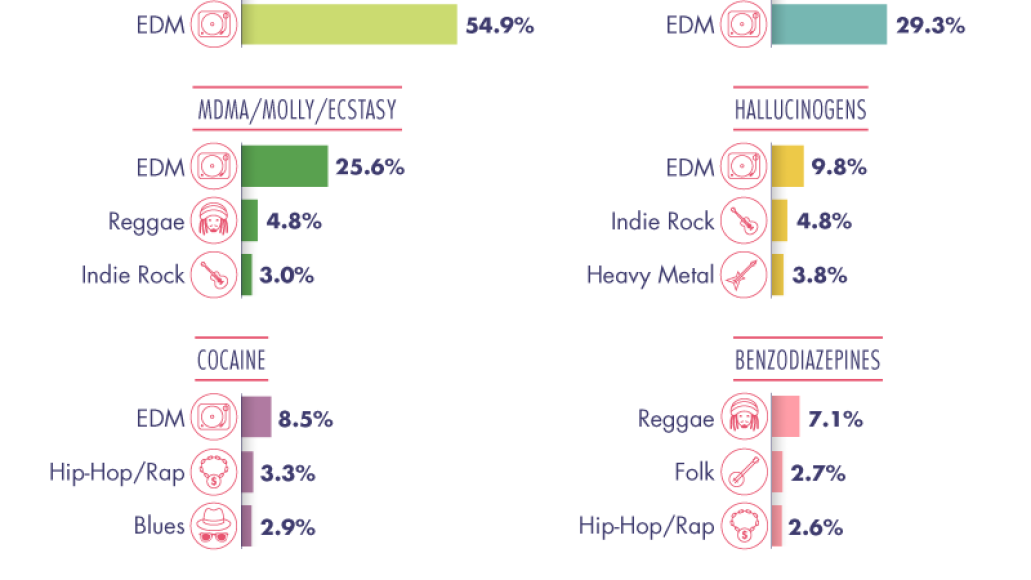 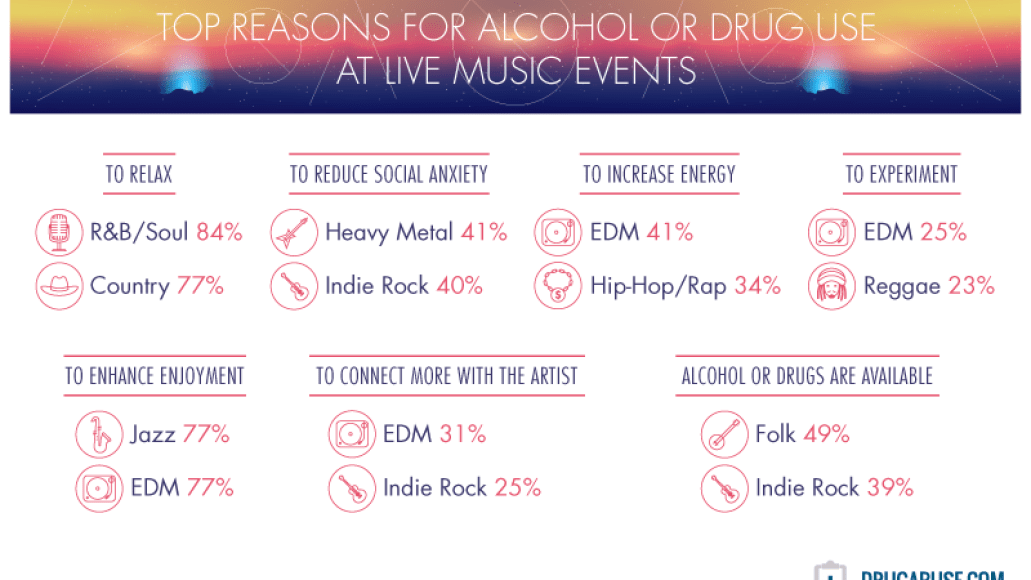 The researchers also figured out what age certain genre fans were more likely to start taking drugs at live music events. Heavy metal and EDM fans usually got into the stuff before they hit 20, with the span between 20 and 21 being popular staring points for fans of classic rock, reggae, hip-hop, alternative, folk, and indie rock. Jazz and blues listeners tended to wait until they were between 23 and 24 (I find it hard to believe it took them that long to try a “jazz cigarette”), with classical music attendees being the latest bloomers at 25.

Though it may not be the most groundbreaking (or thorough) study, the survey does provide some interesting data points when you see it all spelled out. Regardless of your genre or drug of choice, however, it’s important to remember to stay smart and stay safe. Reach out to folks like Detox or Harmonium (who provide safe, sober spaces at music events) if you’re having trouble, and don’t be afraid to ask for assistance from onsite medical or security personnel. None of these people are going to get you in trouble; literally their only job is to keep you safe, and that includes helping you out if you’re intoxicated.

And remember, you don’t have to do all the drugs to have a good time.