Yet another massive U.S. rock festival has announced its lineup, and once again, the list of bands is impressive. North Carolina’s Epicenter Festival will be headlined by Foo Fighters, Tool, and Korn. The three-day event takes place May 10th-12th at the newly created Rockingham Festival Grounds in Rockingham, North Carolina.

In addition to the aforementioned headliners, Rob Zombie, Judas Priest, The Prodigy, Bring Me the Horizon, The Cult, 311, Evanescence, Mastodon, Bush, Live, Meshuggah, Machine Gun Kelly, Killswitch Engage, Tom Morello, Architects, Black Pistol Fire, and more are among the dozens of other acts on the bill.

In a statement, Korn referred to their surprise 2012 reunion with Brian “Head” Welch at Carolina Rebellion, which ultimately led to the guitarist rejoining the band on a permanent basis. “There are many defining moments that dramatically mark a band’s history, and one such moment in time happened in North Carolina with Korn,” the band remarked. “North Carolina holds a special place in Korn’s heart, as we unexpectedly reunited with our old friend Head. It’s been a great 6+ years with Head back in Korn and we look forward to rocking NC again with Foo Fighters, Tool and many other great bands.”

Bring Me the Horizon singer Oli Sykes added, “We’re very excited to be playing next year’s Epicenter Festival in Rockingham. It’s a privilege to be sharing a stage alongside some of our favourite acts, and to be back in North Carolina.”

The daily lineups have already been revealed, and can be seen in the poster below. Tickets, VIP passes, and camping packages for Epicenter go on sale this Friday, December 14th, at noon ET at EpicenterFestival.com.

Update 1/22/19: New lineup additions include a reunion of VH1’s That Metal Show, with hosts Eddie Trunk, Don Jamieson and Jim Florentine recreating the show for two onstage performances. Plus, the bands The Interrupters, Light the Torch, Ded, Dead Girls Academy, and Tetrarch have also been added to the bill. See the updated Epicenter lineup poster below. 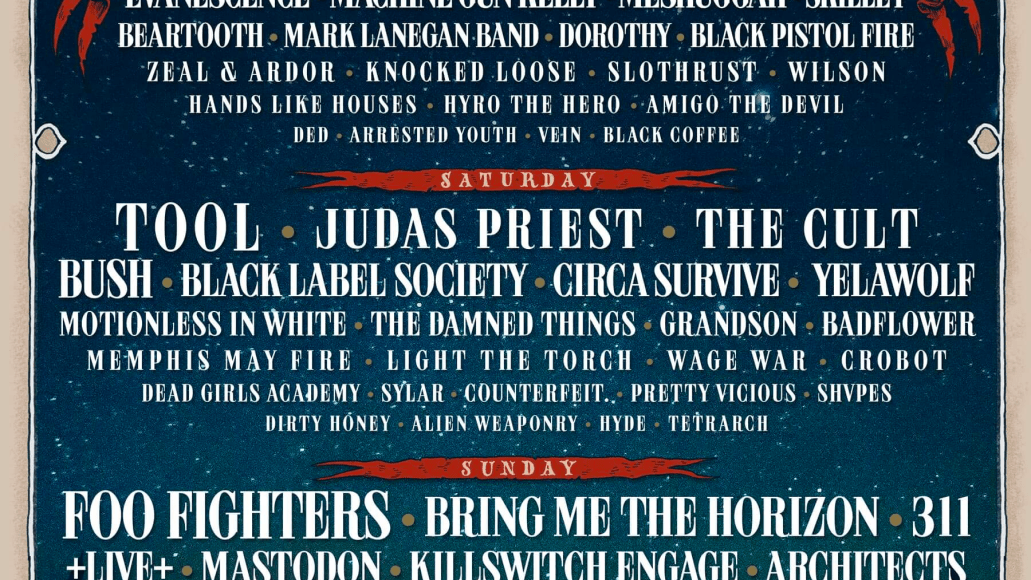