Walk into any drugstore between October and December and there will be at least one endcap of Tim Burton’s The Nightmare Before Christmas snow globes and plushies and slippers and lawn decorations and lights, Jack Skellington costumes in plastic bags and inflatable Oogie Boogies, and a Nightmare-themed Jenga game.

But this wasn’t always the case.

When the film hit theaters in October 1993 – first as a limited release and then a full theatrical release – it went virtually unnoticed, garnering a modest-but-successful $76 million gross and becoming the first film nominated for Best Visual Effects at the 1993 Academy Awards (losing to Jurassic Park). 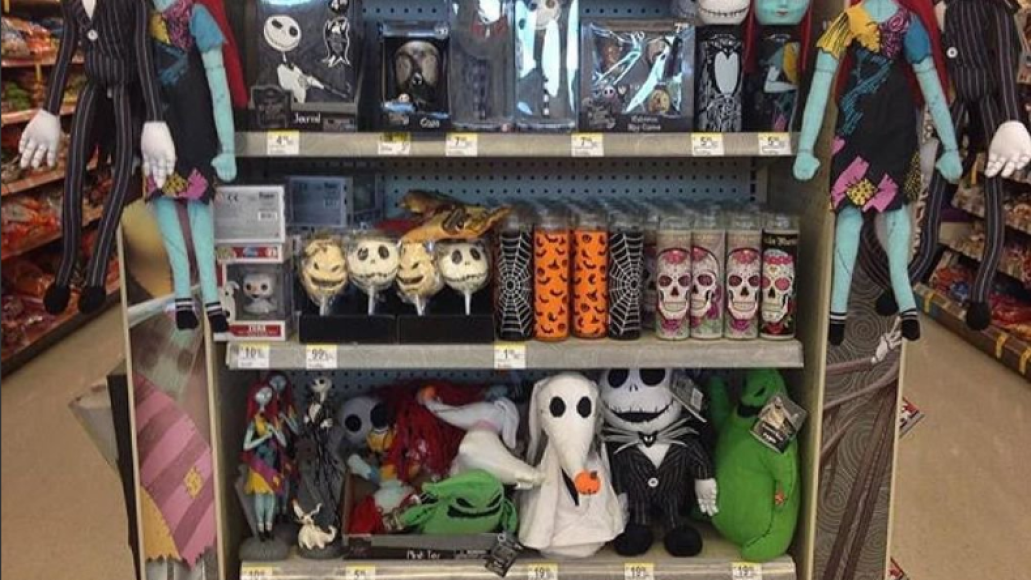 Walgreen’s The Nightmare Before Christmas display, photo by Cyanide_Kat

The film celebrated its 25th anniversary this October in a much different world. Arguments may break out over whether it’s a Halloween or Christmas movie – I’m in the Halloween camp – but it has become a seasonal classic, thanks in no small part to the Disney machine, which pushed merchandising to extremes. For a considerable time through the late 1990s, the only merchandise available was a handful of stationary and party supplies and some figurines and dolls by Hasbro and NECA. (I got my Jack Skellington from Tower Records and my Sally from St. Mark’s Comics, each in the $80 range.) But in summer 2001, Disney released a handful of chibi-style plushies into their stores, and the push had begun anew. Now, the merchandise is stocked alongside other licensed holiday properties, including How the Grinch Stole Christmas, A Christmas Story, and A Charlie Brown Christmas.

Perhaps the reason The Nightmare Before Christmas has taken such hold is that it creates an accessibility point for the spookier side of film. It’s creepy but never violent, twisted but never cruel. Just as your neighbor is not a witch, just a woman wearing a mask when she opens the door with a bowl of mini Kit Kats, Jack and company are just ordinary people doing their jobs — even if their ordinary job involves hiding under the stairs with spider-hair. 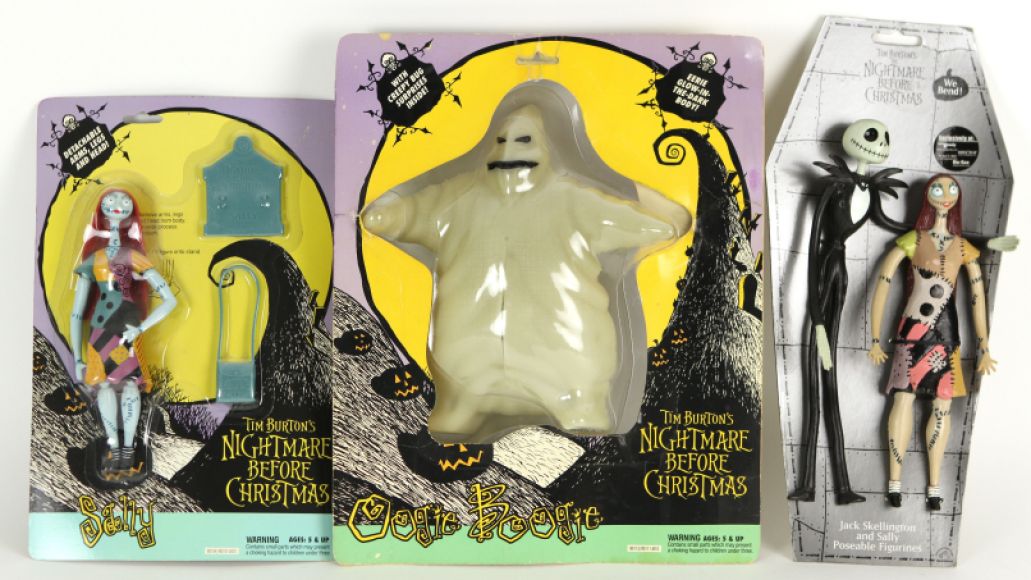 But it is also an immensely tender film. Under the trappings of ghosts and wrought-iron spikes are characters who yearn – Jack for the world beyond what he has known in Halloweentown and Sally for the kindred spirit she sees in Jack. For being about a skeleton man and a sentient rag doll who fight a burlap sack filled with bugs, it’s a human story and one that can especially resonate with older children and young adults who feel trapped by their parents, by the boundaries they cannot escape — their parents’ rules, school, the physical beyond of the city, town, or county line. We have all quietly craved someone who does not recognize us as an equal. We have all stitched ourselves back together.

And the film itself? A thing of unrivaled beauty. Henry Selick does not get the credit he deserves for the stop-motion majesty he created. These are worlds you can walk around in. These are characters who live and breathe, even if they are only wire and sculpting clay, even if the worlds they inhabit are only a few feet tall. It was re-released in 3D in 2006, and although retro-conversions of films are often flat and flawed, the feeling of depth made you wonder why it wasn’t released in 3D in the first place.

If you want to see something truly terrifying, watch through Jack Skellington’s animation test below from the release’s Bonus Features. At the end is a scene featuring a taste of what would later become the song “Poor Jack” and the appearance of the most monstrous Santa ever put on film.

The film also features long-time Burton collaborator Danny Elfman’s most astonishing score, with 11 songs and six orchestral numbers. Elfman himself provided the singing voice of Jack Skellington and Shock, as well as various characters in Halloweentown, and although he described the soundtrack’s composition as “one of the easiest jobs I’ve ever had” to Premier in 2008, you wouldn’t know it. Songs like “Jack’s Lament” and “Sally’s Song” are emotive and melodic, taking full advantage of Elfman and actress Catherine O’Hara’s dreamy vocal stylings, while ensemble pieces such as “Making Christmas” are lush and full of glorious and unexpected sounds.

In 2008, for some inexplicable reason (money, lack of common decency, contempt for what little remained of the film’s dignity and legacy), Disney released Nightmare Revisited, a collection of phoned-in covers of the soundtrack, including Marilyn Manson’s “This Is Halloween”, Korn covering “Kidnap the Sandy Claws”, and Amy Lee of Evanescence singing “Sally’s Song”, shoring up the film’s burgeoning reputation as a mall-goth phenomenon and making us wonder if there really was a time when we considered Marilyn Manson a threat to the moral fiber of our precious youth.

But in re-watching as an adult, I couldn’t help but recognize that under Elfman’s brilliant score and Selick’s breathtaking animation is a story with its own uniquely Tim Burton brand of terror:

At the end of Beetlejuice, goth-template Lydia Dietz, once outfitted in veils and Victorian dressing-gowns, becomes just a normal girl at a normal New England Prep school. At the end of Edward Scissorhands, the bullies win and poor Edward has to go back to living alone so that the Boggs family can go back to their cul-de-sac life. And at the end of The Nightmare Before Christmas, Jack, having transgressed beyond his neighborhood, is reminded that he should stay in his place, just be the Pumpkin king because dreaming of anything else is dangerous and upsets everyone.

These are happy endings? 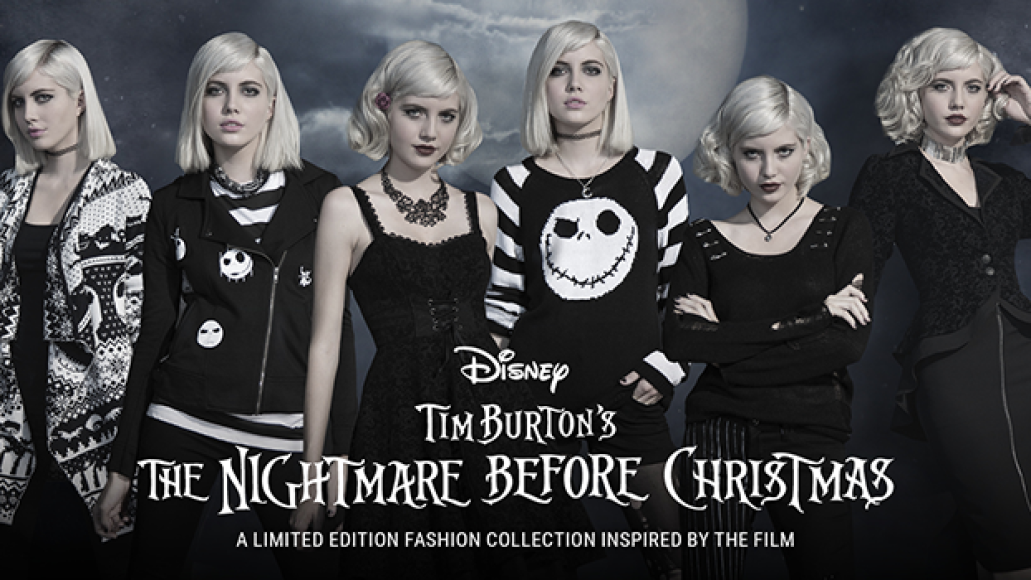 The sudden glut of Nightmare merchandise and the Hot Topic-fication of the film stand to this point. You go into the store, you put on your black dress, and you pretend to be spooky in math class, but the core thesis of the store is that you will eventually outgrow your penchant for the dramatic and assimilate. And while there’s always something a little silly about an old goth still trying to do the Crow makeup to go to the grocery store – silly enough that there’s a Portlandia skit about it – it’s not an especially good message to be feeding teenagers who are still sorting out their identity, especially not when it’s a nakedly corporate agenda to part them from their allowance. No different than any other brand marketed to teenagers, but still crass when branded with the “Be Yourself” message alongside the black-and-white spirals and the ghostly pinstripes.

And in that sense, Jack finally got his dream, to be part of every household at Christmas.

How Tim Burton's The Nightmare Before Christmas Became a Holiday Classic