Setting the Stage: Capping off another magical year, Sweden’s Ghost rolled into Brooklyn, New York, on Saturday (December 15th) to perform the last show of their 2018 trek, dubbed “A Pale Tour Named Death”. And while most of the fall North American tour was staged in theaters, the Brooklyn stop was one of three shows that would take place in a large arena, signifying the remarkable rise to fame by the purveyors of blasphemous yet infectious metal and progressive rock.

As it is, Brooklyn’s Barclays Center has a stark interior, with black seats and a black ceiling, providing the perfect setting for Ghost to bring their impressive cathedral-like set, complete with a step-filled altar and a backdrop depicting stained glass panels honoring Papa Emeriti of generations past.

With rapper Jay-Z playing a major role in the development of the Barclays Center, it’s been nicknamed as “The House That Hova Built”, but on this night, it would be Ghost frontman Cardinal Copia’s chance to turn the arena into his own house of worship.

Taking the Stage: With no opening act, Ghost’s nameless ghouls took the stage precisely at 8 p.m., playing the track “Ashes”, joined a couple minutes later by Cardinal Copia himself, as they followed with their recently Grammy-nominated No. 1 rock single “Rats”. Including the Cardinal, the live band is made up of eight musicians, giving Ghost a mighty sound that easily filled the cavernous arena. The opening numbers were two of eight songs the band would play from their 2018 disc, Prequelle, which itself received a Grammy nomination for Best Rock Album.

The Cardinal, or Tobias Forge, as his friends and family know him, would change his look throughout the night with a rotating wardrobe of all-black, all-white and all-red outfits, some more pious than others. Ghost’s previous album, Meliora, would also be well represented with eight songs, including their first U.S. radio hit, “Cirice”, which led into “Miasma”, featuring a saxophone-solo cameo by the physically weak yet determined Papa Nihil.

Following “Life Eternal”, the audience, which had been on its feet from the first note, was informed that there would be a 15-minute intermission, offering a chance to sit down or grab a beer before the second act. Sporting his red Cardinal outfit, Copia and company launched Act 2 with the Meliora songs “Spirit”, “From the Pinnacle to the Pit” and “Majesty”. A few songs later, “Year Zero”, off the 2013 album, Infestissumam, would get a big rise out of the crowd.

For most of Act 1, the Cardinal was relatively light on banter, once in a while screaming shout-outs to Brooklyn, but that would change during Act 2. Before launching into “Mummy Dust”, the frontman told the crowd that the band was about to “wobble your asses” and “tickle your taints”, and then politely surveyed the crowd after the song to see if we indeed had our asses wobbled and our taints tickled. The response was resoundingly affirmative.

The comedy didn’t end there. During the band’s cover of Roky Erickson’s “If You Have Ghosts”, Cardinal Copia introduced the band, building up each member with accolades and praise, before exclaiming, “Ladies and Gentleman, Ghoul!!!” Yes, they were all introduced as “Ghoul”. He saved his best remarks for the two female keyboardists, describing them as lionesses who would have leaped into the audience and “torn your assholes open” had they not been contained by a small chain that surrounded them onstage.

Ghost closed out Act 2 playing their stellar new single, “Dance Macabre”, giving the catchy number a heavier vibe in concert, followed by their most arena-ready song, “Square Hammer”, which got the biggest reaction of any performance of the night. The band would then take its final bows, walking off the stage to thunderous applause.

A few minutes later, Cardinal Copia would return, giving a somewhat longwinded monologue about it being the last show of the tour, and how they wanted to do something special for us. He told the audience that the band originally wanted to take us outside and do the nasty with each and every one of us, but that idea was shut down by the magistrates of Brooklyn. Instead, he implored us to make love with each other and ourselves when we got home, and offered up an alternate treat, a performance of “Monstrance Clock” to close out the three-hour evening of entertainment.

And with that, Ghost proved they can command an arena, albeit a modified setup that didn’t include the upper bowl. Still, there were a good 7,500 or so people there who were truly captivated by Cardinal Copia and company — pretty remarkable for a band who celebrates Satan as much as it does infectiously heavy music. With the addition of a few more “Square Hammers” in their toolbox on future albums, the band has a chance to graduate to full arenas in the years to come. Until then, we wait to see what the next incarnation of Ghost and their always charismatic frontman (whoever it may be) have up their sleeves. 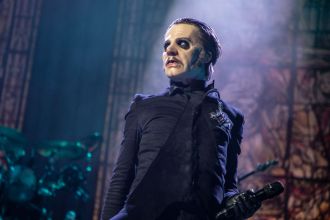 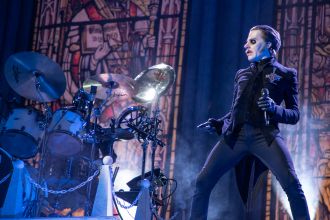 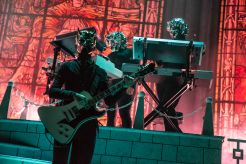 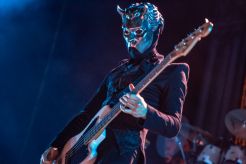 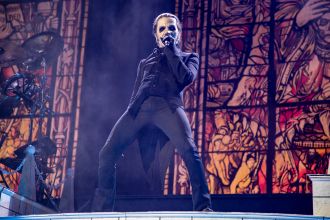 All photos by Johnny Perilla (@johnnyperilla)

Act 2:
Spirit
From the Pinnacle to the Pit
Majesty
Satan Prayer
Faith
Year Zero
Spöksonat
He Is
Mummy Dust
If You Have Ghosts (Roky Erickson cover)
Dance Macabre
Square Hammer