When I reach Bradford Cox to talk about his new record Why Hasn’t Everything Already Disappeared?, the Deerhunter frontman is on the move. He carries me with him on the phone, from car to shop to restaurant, on an everyday errand run through an unseasonably warm Atlanta night, one that adds an element of mundane familiarity to our conversation that’s made all the more jarring by the subject matter of the album at hand. Perhaps unsurprisingly given its title, the follow-up to 2015’s Fading Frontier, isn’t interested in check-out lines or carry-out runs — it’s more concerned with the end of the world as we know it.

Interpersonal estrangement and existential barrenness pervade the foreground of Deerhunter’s eighth studio record. In the back, just over the horizon, loom the seemingly inevitable threats of rising political violence and the catastrophic ecological collapses of climate change. It’s the kind of bleakness that, in the hands of a less seasoned artist, might produce a profound, but unlistenable, slog. Cox, however, isn’t interested in giving in.

In their best moments, the songs of Why Hasn’t Everything Already Disappeared? draw out the moments of breathtaking, golden-hour beauty from our seemingly doomed moment. Sometimes, that beauty rests in little moments; the lilting harpsichord of co-producer Cate Le Bon on “Death in Midsummer”, perhaps, or the Diamond Dogs swagger of “Element”’s slow-grooving outro. Other times, it comes in maximal waves; “What Happens to People” rings out like a torch song from beyond the grave, while “Détournement” recalls the dawning, shrinking-world dread of Laurie Anderson’s “O Superman” as it asks the same question: can this really be all there is?

HearWhy Hasn’t Everything Already Disappeared? in full below:

For the latest Track by Track, we don’t quite answer that question during our call, but we cover plenty more, connected on a Monday night when the air’s just a little too warm and the worst is almost certainly yet to come. Above, listen to our full audio interview with Bradford Cox for his thoughts on what happens when you record the impossible, how picking a single becomes a Rorschach test, and why guitarist Tim Presley is the world’s greatest person. A condensed, text-based preview is below.

“Death in Midsummer”:
“I thought that I was being very defiant by selecting [“Death in Midsummer” as the album’s first single]. It was never a question for me. It was always destined to be the first track released, but my expectation was that people were going to be like ‘Oh, that’s nice. We’ll wait for the single.’ I expected for it to be ignored. It was kind of interesting to me, the way that it turned out. People seemed to take to it very well. That was a really pleasant surprise. And then the song that I thought was going to be the better single seemed like it attracted people less. It’s funny when you think you know what you’re doing and you have no idea.”

“No One’s Sleeping”:
“There’s a sense of nihilism, you know? We’ve reached a sort of very dismal nadir. A lot of times that leads to some kind of revolution and renaissance, but I don’t know. It’s not my job to be pleasant, you know? So I have no problem saying that there’s not really a bright side. […] I don’t think that it’s necessary to speak in specifics. I was very specific in the track by track, and I mentioned [British MP] Jo Cox’s death, which was incredibly appalling to me. Of course, now I’ve talked about it in every interview, and I feel a bit weird about it because I definitely don’t want to use her death as a picture frame for what is, ultimately, a song. […] I think the message of the song is pretty nihilistic, unfortunately. I hate to be that way, but that’s what comes honestly to me now.” 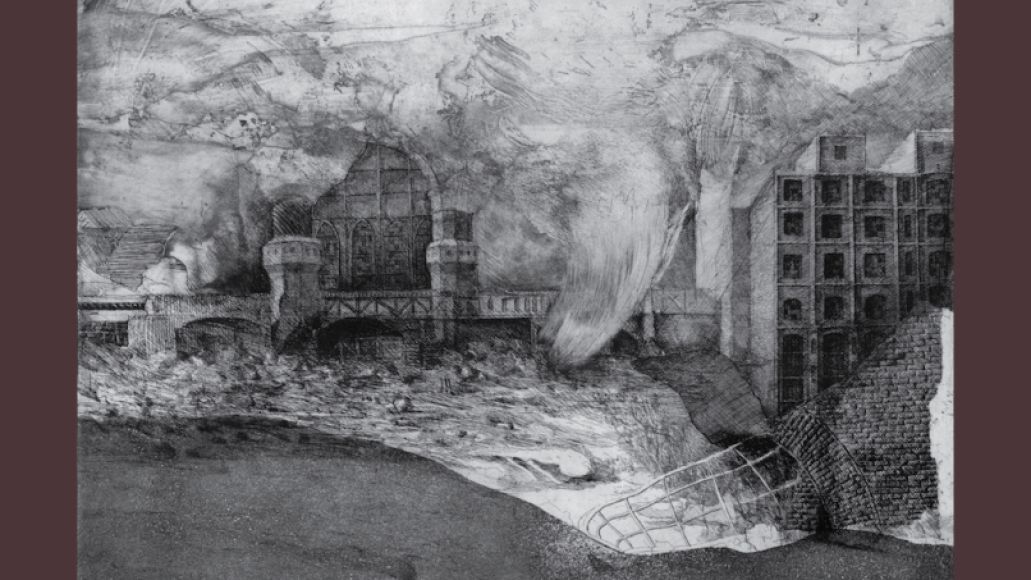 “Greenpoint Gothic”:
“As I said a moment ago, I don’t like all this talk. I’m sitting here feeling so uncomfortable from talking so much with everyone. I’ve really revealed stuff, my private views that I always said would be private. I think, unconsciously, something like “Greenpoint Gothic” comes along as a way of saying ‘Alright, enough talk. Enough seriousness. Let’s just take a moment.’ Architecturally, it’s meant to […] be a breath. I think I used [the phrase ‘palate cleanser’] in the studio to describe it.”

“Element”:
“When I wrote [“Element”], I thought it was maybe the strangest song I’d ever written. I’m speaking specifically of harmony and chords. […] I thought that it was an impossible description of a song that wouldn’t work. I’m very fascinated by […] people that describe impossible structures that can’t exist. Stairways that lead nowhere, and these kind of things. That’s kind of what “Element” reminds me of, in a way. An Escher print, or something.

It shouldn’t work, but to me, it does. […] I usually pick the first [single], and then I let other people choose the rest, because I always find it very interesting. Everyone wants a different song to be the next single. We’re not very competitive, in a marketplace sort of way, so it’s less about which song you think will be received well commercially. There’s not much hope of that, with any of our songs. […] I’ve had people tell me that ‘Greenpoint Gothic’ should be the next single, and I’m just like ‘You’re insane!'”.

“What Happens to People”:
“Can’t talk about this one. This one’s a bit like ‘T.H.M.’ on Monomania. It’s the one song that I can say was written following a very specific tragedy, and I don’t think it’s something I want to discuss as much. It’s very much open for interpretation.”

“Detournement”:
“I love places. I hate going to them. I don’t like traveling. […] I don’t think I have a very original perspective on it. I think I share the kinds of anxieties that a lot of people have. I’m very claustrophobic in airports and places like that. I always feel like I’m going to miss something – miss a flight, be late, do something wrong. […] Inevitably, once I get on stage, or once I get where I’m going, I really enjoy it. That’s kind of a boring answer, but it’s the truth.

My familiarity with the term [detournement] comes from the Situationists and a sort of psychogeography, you know? Wandering as a committed act.”

“Futurism”:
“Tim [Presley] is one of the greatest people I’ve ever met, simply put. He’s one of my all-time favorite human beings. I don’t think there’s an ounce of vitriol in him. He’s so kind. There’s not something dark under the surface with Tim. He’s just an incredibly generous and sweet person. I could scream from the highest mountain and still not sing his praises loud enough.

[…] He’s Cate’s partner, and it was just one of those things where I was like, ‘You can’t leave.’ Usually I don’t want partners around, because I think it can be distracting. It feels a bit unbalanced. I like everybody to be alone. It’s kind of a military maneuver. […] In the case of Tim, within 24 hours, I was like ‘I want you to join the band.’ And everyone agrees! The entire band feels exactly the same way.”

“Tarnung”:
“[‘Tarnung’] is named after a poem by an English and visual artist named Ian Hamilton Finlay. I got his book in Marfa. When Lockett [Pundt] wrote this song, he didn’t have a title, and he was sort of sitting around looking at that book. I can’t tell you much beyond that!

I wrote in my liner notes that it very much reminds me of – Lockett and I would take long walks on a tour we went on last spring. We did a lot of French dates, in smaller French towns, so we did quite a lot of walking in very, very beautiful French countryside villages. It was a very rainy season. That’s what this song reminds me of. European raininess. 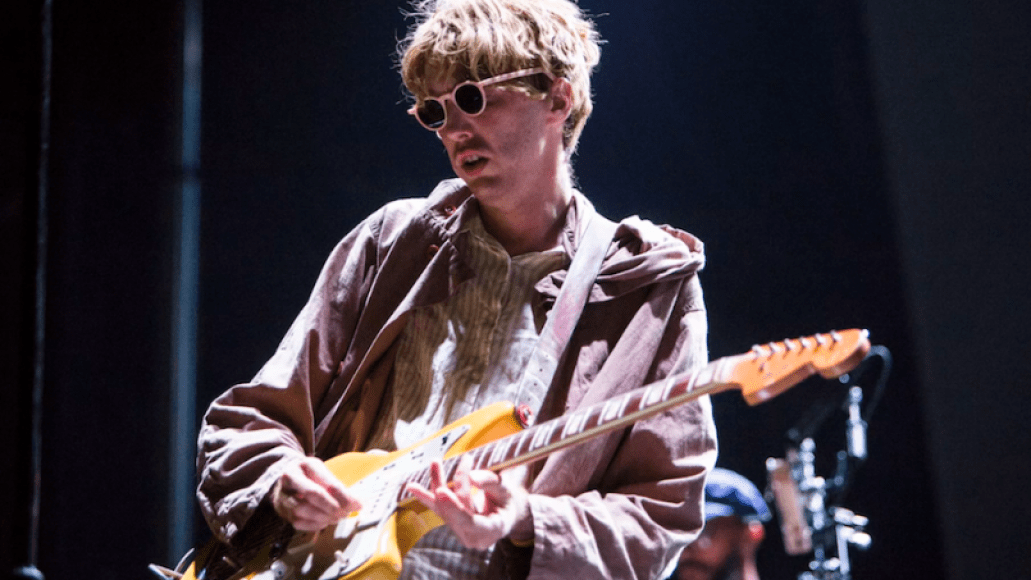 “Plains”:
“One of the strange things about West Texas is the vastness creates an impression that you’d expect a certain kind of reverb. When you look at those giant skies, I guess you imagine a very cavernous thing, but when you actually walk in the desert, it’s so dead. It’s so quiet. There’s so little reverb. I think that’s really unsettling. Disconcerting.

[…] I remember feeling the same way when I walked on stage – we played a few times at Madison Square Garden, opening for real big bands, and when you walk out on that stage, you have this feeling that everything is going to be endlessly reverberant. Then you go out there, and it’s as dead as anything. I think that disconnection and slightly uncomfortable claustrophobic quality played into the sound of the record.”

“Nocturne”:
“[‘Nocturne’ and ‘Death in Midsummer’] were written probably the same day. Certainly the same week. The only reason I can tell you that with certainty is their positioning next to each other on the memory card. […] They felt like two bookends.”