Last week, a judge ordered Grimes and Azealia Banks to preserve all Twitter, Instagram, and text message conversations relating to Elon Musk’s “420” tweet. Now, after Musk’s attorneys attempted to discredit her as a witness, Banks has chosen to share her correspondences with Grimes for the entire world to see.

First a quick refresher: Musk, the billionaire founder of Tesla, sent out a tweet in early August falsely claiming that he had secured funding to take his company private at $420 a share. Apparently, Musk thought the number would amuse his girlfriend, Grimes, who had taught him the meaning of 420 in marijuana culture. Later that month, Banks revealed that she’d spent a harrowing weekend like “a real [life] episode of Get Out” with Grimes at Musk’s house, right when the infamous tweet was sent. Banks told Business Insider that she saw Musk “scrounging for investors” after tweeting, and alluded on Instagram that he may have written the message while on acid.

The tweet cost Tesla billions of dollars in valuation, and Musk is now facing a lawsuit from several of the company’s investors.

Musk’s legal team had hoped to prevent Banks from testifying in the suit. “She is a ‘veteran of long and nonsensical beefs [having] feuded with everyone from Sarah Pain to Nick Cannon,’ Musk’s lawyer Dean Kristy argued in a legal filing. “She remains a ‘Twitter villain even after being banned from the service’; she went on a rant on Instagram ‘that began as a delirious critique of colonial wealth and racial privilege, [and] became a vaguely eugenicist denigration of Musk as a caveman.’”

In response, Banks suggested she has “plenty more dirt to spill on Elon,” adding, “This is going to get extremely ugly. I may be a lot of things but a liar is not one of them. Elon will learn very soon who is more powerful of us two.” Now, Banks has shared her text message correspondence with Grimes dating back to August 16th, 2018 — nine days after Musk’s “420” tweet.

In the text messages (via reddit), Grimes repeatedly refers to Banks as a “narc”, and both women trade insults about the other’s physical appearance.

Banks previously apologized to Musk for “all the painful events you’ve endured” and encouraged him to “just speak to me directly bc This is getting out of hand.” However, in a later Instagram message, she accused Musk of “hack[ing] my phone, my computer, my website, have a PI wait on my block, stalk my social media, have failed attempts to poison me etc etc etc.” 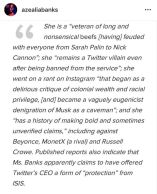 We’ve reached out to representatives for Banks and Grimes for more information.