Toronto punk outfit PUP have announced their third full-length, Morbid Stuff. The follow-up to 2016’s The Dream Is Over is due out April 5th on the band’s new label, Little Dipper (via Rise Records/BMG).

PUP recorded the album with producer/mixer Dave Schiffman (Weezer, The Mars Volta) as they dug into lead singer Stefan Babcock’s battle with depression. Fans of the band’s playful look at life’s emotional wasteland need not fret, however, as a press release promises the effort contains “all the fury and celebration you’ve come to know, but rooted in understanding of where that fury comes from.” The guys are still teetering on the precipice of complete desolation with manic joy, they’re just more aware of their footing — a state truly befitting the title, when you think about it.

Such is the case with the LP’s lead single, “Kids”. Charging gleefully towards insanity, Babcock yell-sings about “navigating my way through the mind-numbing reality of a godless existence.” As always with PUP, the track embraces the misery by wrapping it in melodic, driven punk chords and thunderous gang-vocals. As Babcock explains in a press release, after all, it’s only together that you can learn to survive this “desolate planet:”

“‘Kids’ is a love song from one nihilistic depressive to another. It’s about what happens when you stumble across the only other person on the face of this godless, desolate planet that thinks everything is as twisted and as fucked up as you do. And thanks to them, the world starts to seem just a little less bleak. But only slightly — it’s still pretty fucked up to be honest.”

Check out the track below.

Pre-orders for Morbid Stuff are live now. Also available is “The PUP Morbid Stuff Annihilation Preparedness Kit”, a full pack featuring a CD or limited edition colored vinyl LP, a long-sleeved tee, a backpack with patch, custom band-aids, a multi-tool, a waterproof container, and more. There’s even a extra limited edition version that comes with — and this is 100% true — a full-sized inflatable boat. Snag yours via PUP’s merch store.

Below, find the Morbid Stuff artwork and tracklist. 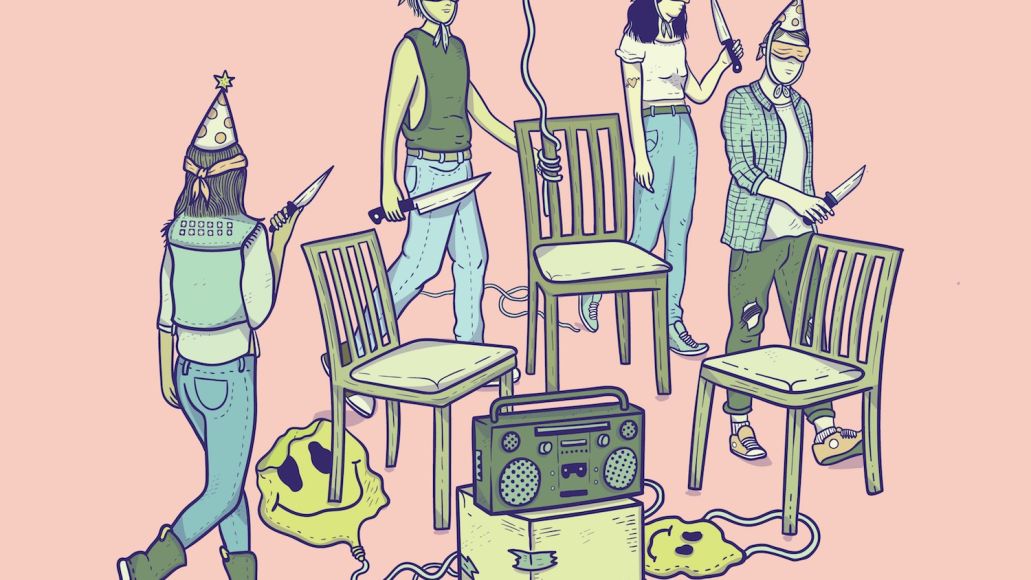 PUP will head out on an extensive spring and summer tour in support of the new album. Find their itinerary below.