Following last year’s announcement of a new album featuring the vocals of their late frontman Wayne Static, as well as guest singers, the surviving members of L.A. industrial metal group Static-X have revealed that they will be embarking on a North American tour this summer with co-headliners DevilDriver. They’ve also shared a video for a newly recorded version of “Push It” featuring as as-yet-unnamed guest vocalist.

Billed as a memorial tribute to Wayne Static, this tour was set up both to promote their forthcoming album, Project Generation, and to celebrate the 20th anniversary of their debut album, Wisconsin Death Trip.

“Our intention is to pay ultimate respect to Wayne and to celebrate the music that has been in all of our hearts for more than 20 years,” bassist Tony Campos said in a statement accompanying the news. “It’s all about channeling the vibe from 1999 to the best of our ability and playing those classic Static-X songs live and loud.”

In addition to Static-X and DevilDriver, the tour will feature support from Dope, the heavy rockers who will be celebrating the 20th anniversary of their debut album Felons and Revolutionaries. The trek kicks off on June 18th in Tempe, Arizona. You can get tickets here.

“For those who don’t know, I am the one who first discovered STATIC-X back in the day in a small club in front of about 40 people,” DevilDriver frontman Dez Fafara said. “Co-headlining this first memorial tour is not only a way to pay homage to Wayne, but something I’m very excited to do. Static-X will be closing the show each night out of respect for Wayne. I’ll be there nightly, side stage, watching the unit do their thing with a big smile. I hope that Wayne will be there in spirit, watching as his brothers pay respect by bringing this music back to the fans that made the band so massive! I know he would have loved this!”

The only question that remains is who Static-X has found to take over vocals for Wayne Static on this upcoming tour. The promo clip that the band released today obscures the person singing this new version of “Push It,” a tune originally found on Wisconsin Death Trip. The band insists that they will reveal this mystery guest in due time but for the moment, says drummer Ken Jay, “It would be inappropriate for us to put the focus on anyone other than Wayne, Tony, Koichi and myself. It feels like the best way for us to celebrate Wayne’s legacy, along with the 20th anniversary of Wisconsin Death Trip, with all of our fans.”

Wayne Static died at age 41 in 2014 from a lethal mix of prescription drugs and alcohol.

Tickets for the tour go on sale this Friday, with a pre-sale beginning tomorrow. Both Static-X (click here) and DevilDriver (click here) are offering meet and greets for various stops on this trek, as well. Meanwhile, details on the new Static-X album are expected to be announced in the coming weeks. You can also get tickets here. 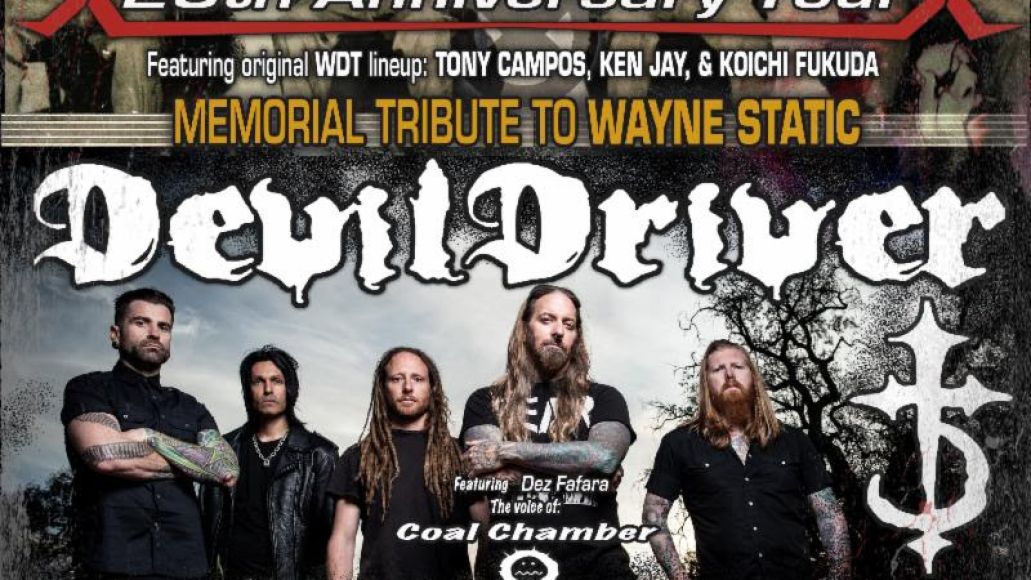