This isn’t a list of the best live performers or performances of all time, though, in many cases, this article might not look all that different if it was. After all, it’s not difficult to imagine, say, the Michael Jacksons and Led Zeppelins of the world (too obvious to be a spoiler) appearing near the top of both lists. Still, this is a ranking of the greatest tours of all time, and that difference should be stressed.

We attend concerts to immerse ourselves in a moment — one that can be communal, incredibly emotional, and even life-changing. Of course, as we leave the venue still intoxicated from the experience, vans, tour buses, and trailers full of equipment are already heading to the next city with the mission of creating a moment for an entirely new group of people. In that spirit, we really did our best to consider proper tours and not merely clusters of shows or residencies. In all these instances, the artist had a unifying vision for their trek, even if that vision was never putting on the same show twice.

We set out to create this daunting list with our good friends at Vivid Seats. Our goal was to highlight the greatest tours of all time while being as inclusive as possible. In other words, you won’t see more than one tour from an artist on this list; we chose instead to spread the love around in as many directions as possible.

Below, you’ll find spots 91-100. To check out the entire list, head on over to Vivid Seats. As always, we’ll save a seat for you. 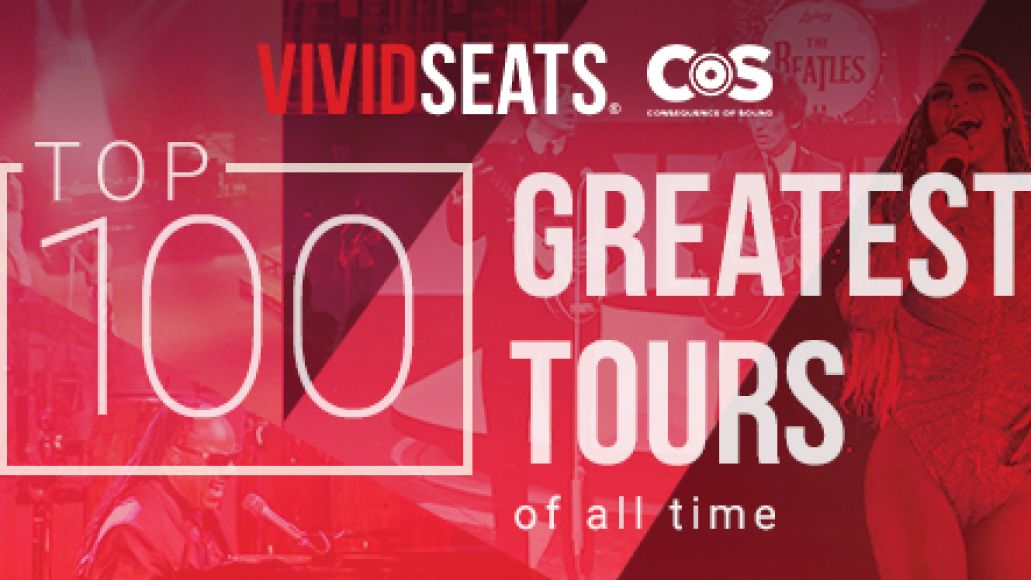 Not all iconic tours are flawless, as sometimes it’s their flaws that make them stand out. OutKast’s reunion in 2014 to celebrate their 20th anniversary started off shakier than everyone, including André 3000 and Big Boi themselves, had hoped: technical problems sparked, the audio was too quiet, and they cut material after losing track of time. But over the course of their massive reunion tour playing at more than 40 festivals worldwide, OutKast found their footing, transforming from an underwhelming reunion set to a highlight-laden performance remembered for its stacked setlist, culture commentary via André’s custom jumpsuits, and the energy the duo still brought out of one another after all of these years. –Nina Corcoran

By the ‘90s, there wasn’t much this EGOT-winning star of stage, studio, and screens of all sizes hadn’t achieved. However, the one triumph that had evaded Barbra Streisand was a successful tour. Pregnancy had cut a planned tour in the mid-‘60s down to a mere handful of shows, and stage fright had kept her away from performing ever since. It’s no surprise, then, that this long-anticipated tour set attendance records at each of its stops and resulted in a hit HBO special, a successful VHS release (later DVD), and a multi-platinum live album — not to mention several subsequent tours. Let’s face it: as Yentl, Babs, or Greg Focker’s mother, Barbra is like butter. –Matt Melis

Billed as an “electro-metal pop-opera” with openers like Zedd and The Darkness tacked on, Lady Gaga’s Born This Way Ball was set to be a spectacle even before she hit the road. By embracing ‘80s camp, the self-love themes of the record, and tour-specific Versace outfits, Gaga used innovative stage installations like a medieval castle and a puppeteered horse to create a world all her own through which to relay her music. More than anything else, it was a tour marked by a rigorous routine full of strenuous dance movements — moves so intense that she developed a break and labral tear of her right hip come the end, as if we couldn’t already tell Gaga gives performances her all. –Nina Corcoran

Few prog rock tours are as infamous as Genesis’ jaunt in support of The Lamb Lies Down on Broadway, the band’s sixth studio album and last with Peter Gabriel as the lead singer. Equal parts fantasy and character development about an emasculated youth, the record’s plot translated to the stage through a bizarre combination of grotesque costumes, hundreds of slides, and the largest drum kit ever used by Collins. Few things functioned as intended, be it the backdrops or the microphone pickups, which turned the tour into a legendary catastrophe-turned-spectacle. It’s so iconic that it’s routinely covered today (down to every last detail) by The Musical Box, a Genesis cover band that Gabriel himself donated instruments and set design pieces to so the tour can reach a new generation. –Nina Corcoran

If Taylor Swift is an icon who will go down in history, then the 1989 World Tour is what future generations will study to understand why. Apart from the casual 250.7 million dollars it brought in or the endless thinking pieces surrounding it, the 1989 World Tour stood out because of how Taylor Swift embraced her role as an artist intent on doing it up big while still creating a faux intimacy that fans in the nosebleed seats could enjoy. And for the final touch? Nearly every night of the tour, fans were surprised by casual guest appearances, including Alanis Morissette, Avril Lavigne, Beck, John Legend, Lorde, Mary J. Blige, Mick Jagger, St. Vincent, and more. No big deal. –Nina Corcoran

Tom Waits had left his drunken piano lounge act long behind him by the mid-‘80s and stumbled into his alter ego of Frank O’Brien, a character he and wife Kathleen Brennan would both incorporate into his records and adapt for the stage. The Big Time shows captured those two worlds colliding. A loose narrative about Frank trying to break into show business connected a series of avant-garde performances, including the pencil-mustachioed Waits singing “Innocent When You Dream” in a bathtub and hammering on boiler room steam pipes during “16 Shells from a 30-Ought Six”. Not even when the footage got edited into the Big Time concert film did anything really make sense. However, it was a chance to see our favorite rain dog performing some of his finest material at the height of his quirky powers. –Matt Melis

Oh, what a difference a few years can make. In 1991, Canadian singer-songwriter Alanis Morissette was opening on tour for Vanilla Ice and probably still best remembered in America for being one of dozens of childhood stars regularly slimed on Nickelodeon in the ‘80s. By 1995, she was touring what would become one of the biggest records of the decade, Jagged Little Pill, with the likes of fellow alt-rock stalwarts Our Lady Peace and future luminaries Radiohead opening. Looking back, those who caught Morissette’s Can’t Not Tour can safely say they saw the artist who solidified the place of women in ‘90s alternative rock truly coming into her own onstage. –Matt Melis

One of the most popular tours among Depeche Mode fans and electronic fans in general, the World Violation tour saw them kick off 1990 in style. The band’s synthpop was at a musical peak, as was their energy. Live videos from the tour capture what it felt like to be there, from people’s shrieking screams for the band at the start of songs to the mischievous air that hung during their stripped-down, acoustic renditions. Depeche Mode still sound strong today, but catching them during their peak in the middle of a tour fans still gush over is a bucket list for any synthpop-loving music obsessive. –Nina Corcoran

With each passing year, Florence + the Machine seem to thrive on life’s most daunting moments, and never was it more evident than during their tour in support of How Big, How Blue, How Beautiful. Whether it was fearlessly taunting a lightning storm at Lollapalooza or lunging into the audience at indoor shows throughout the tour, Florence Welch showed the type of full-faced courage that fills the band’s music with tangible flashes of life. Watching the band onstage, it was impossible not to feel her energy transmit to onlookers, encouraging them, too, to seize as much as possible out of life in any given chance. –Nina Corcoran

The biggest difference between looking back on remarkable tours versus remarkable concerts is what the full package includes. Of all the punk tours of the 2000s, it’s hard not to look at this 2007 trek and wish you were there. Against Me! and Mastodon announced the co-headlining tour during critical points in both bands’ careers, especially since it was just before Against Me! released their major label debut and after Mastodon made theirs. With equally beloved acts like Cursive, Planes Mistaken for Stars, and These Arms Are Snakes locked in as openers, it was a tour-de-force trip that still stands out today as the perfect storm of punk, no matter how old you would have been then. –Nina Corcoran

To check out the entire list, head on over to Vivid Seats.

The 100 Greatest Tours of All Time