Editor’s Note: As Keep It Like a Secret turns 22, we revisit Brian Coney’s chat with Doug Martsch.

One afternoon in 1995, following a label bidding war vying for his signature, Built to Spill’s Doug Martsch signed on the dotted line with Warner Bros. Committing to a six-album deal was a game-changing move and a seismic shift for a band who had spent the first half of the decade emerging as a paragon of Northwest indie.

After 22 years, Martsch and co. fulfilled their agreement with Warner in late 2017. It was the crashing of a wave that crested way back with Keep It Like a Secret, an album that doubled as pure-cut confirmation that Built to Spill were a small-town band worthy of big-league status. Released on February 2, 1999 — and recorded off the back of the release of their critically devoured major label debut, Perfect from Now On — the album was a luminous, 10-track feat that poured forth heart, economy, and ear-dwelling finesse.

Produced by Phil Ek, who worked with the band on Perfect from Now On and their sublime Up Records-released second album, There’s Nothing Wrong with Love, Keep It Like a Secret emerged from Martsch’s winning songwriting M.O. at the time: untold hours of jamming. While less scopic and obsessively crafted than Perfect from Now On, which sidestepped the poppy lo-fidelity of TNWWL in favor of dense, symphonic arrangements, songs like “Center of the Universe” and “Sidewalk” found Martsch crafting brisk tales of psychic pain and heart-stung sonder like no other. Perfect from Now On may have been momentous, but Keep It Like a Secret was no afterthought.

Today, as he looks back from his hometown of Boise, Idaho, Martsch is ever the soft-spoken pragmatist. Having formed Built to Spill in 1992 after parting Treepeople, the Boise DIY heroes who relocated to Seattle before disbanding in 1994, he tells me he never entertained the notion that success was in the cards for his new band, even with the backing of a major. “I didn’t think we were going to make it or anything,” he says. “We had a band because we grew up liking music and thought it would be cool to have a band as long as we possibly could. As far as making it, or having a career, that wasn’t even on the radar at all. It wasn’t ever like, ‘Here I go. Here’s my big chance,’ you know? It was more a case of, ‘Oh, fuck. I don’t know what the fuck is going on.’”

Recorded at the rural Bear Creek studios in Woodinville, WA, in the fall of 1997, Keep It Like a Secret was defined by an important synthesis: concision paired with pure inspiration. Having honed the sprawling majesty of Perfect from Now On as a result of recording it three times, Martsch, alongside the core lineup of bassist Brett Nelson and drummer Scott Plouf, shaved the average song length from its predecessor down by two whole minutes. Using few tracks (“this was something that I really wanted to make sure of,” Martsch tells me) and abiding by the principle that — with the right ideas at least — exploration could run parallel with economy, the wistful sorcery and wiry guitar arpeggios on the likes of “Time Trap” and closer “Broken Chairs” burrowed deep.

Though his band weren’t the first doted-upon indie darlings to make the daunting major-label lunge (Nirvana and Sonic Youth are textbook examples; Hüsker Dü, lest we forget, jumped ship from SST to join Warner Bros in 1986), Martsch was swayed by a critical caveat in the Warner contract: he would retain a large degree of creative control over the albums that he signed up for. “Creative control is sort of a big term,” he reflects. “They could still have done what they wanted. They could’ve not put records out or whatever. But they honored those words, and we did have pretty much complete creative control over that stuff. Honestly, I thought we would do a record or two with them and go back to an independent label and do more records. I thought it was going to be short-lived.”

With the money left over from what Warner Bros. gave him to record Keep It Like a Secret, Martsch was able to quit his day job, pay off his house, and send his son, Ben, to an alternative private school. But for Martsch, the decision to renounce official indie status wasn’t exactly black and white back in 1995. Even today, his perspective remains twofold. “I felt some, for sure,” he says, when asked if he felt guilt. “About the politics of it and contributing to the machine. That as much as the band’s integrity as musicians, generally. But I decided to go for it. I talked to different people to get their opinions about it, including Calvin Johnson, someone who obviously has a noted aesthetic and ethics about that sort of stuff. In the end, I just decided that I really wanted to quit my day job.

“That said, the moment anyone dangled anything in front of me, I was usually sold,” he adds. “I was lucky enough to do it without having to change anything, but in hindsight, we would have been smarter to have been on an independent label, just toured a bunch and taken a bigger split. But then I think, maybe not, because the one thing that was good about being on Warner was that they spent a lot of money on the records. So the quality of the records might not have been good. Or, if we look at it another way, they might have been better; they might have had a different kind of energy. Who knows? What I do know is that, in the past, I just made records that were for my friends or family or whatever. Now, I knew that someone was going to hear it. I didn’t know who or how many, but for the first time I knew that there was going to be some kind of audience.”

It stands to reason that many Built to Spill diehards dabble — and often excel — in creating music themselves. As a bona fide guitar hero and one of modern rock music’s rare unflinching auteurs, Martsch’s considered, intricate craft has proven every bit as intoxicating as it has influential. And yet, beyond the act of doing it, the 49-year-old doesn’t feel like he has much access to the secret behind it. “I think these sorts of things just come,” he says. “You sort of mess around on guitar, come up with some chords, and play around with trying different melodies over the top. You try progressions with other progressions and see how they fit up against each other. And then, for whatever reason, something resonates with you. It’s such a trial-and-error thing. I don’t understand it at all — why some things sound good and some things don’t. I don’t have any insight into any of it, even though I’ve been doing it for a long time.”

Not least on Keep It Like a Secret, the harmonic twists and turns of Martsch’s music brim with dense pathos. Woven with simple, backwashed thoughts on the everyday, “The Plan” and fan favorite “You Were Right” are but two highly charged efforts on album number four. Not that Martsch necessarily identifies with that. “Apart from a few exceptions here and there, I don’t feel like writing songs is an emotional thing for me,” he says. “I guess there’s an emotional moment, here and there. But as I could work on a song for months, I can’t associate an emotion with it because I would go through so many emotions during that time. I agree that it’s emotional, but I don’t think I was necessarily translating an emotion that I was feeling at the time with it. It’s usually far more arbitrary than that — just raw emotion and you take what you want out of it.”

As it turns 20, Keep It Like a Secret remains a perfect polestar for newcomers. Marrying the shape-shifting with the sentiment of what came before, it acts as a mid-point between eras in the first and most fecund phase of the Built to Spill story. “Yeah, I kind of agree,” Martsch says. “There’s a little bit of a reaction from one record to the next. Perfect from Now On was a reaction, both in terms of making the songs long and signing to Warner and not wanting to shove down people’s throats some song that somebody thought might be worth shoving down people’s throats. With it, I wanted to give people a record that was just for fans of the band … and maybe pick up a couple of new ones. We didn’t want to deal with being put out there. We still wanted to be an indie band, but we wanted to get some major-label money. I feel like Keep It Like a Secret was a shift back in the other direction, mostly because Perfect from Now On was such a hard record to make. So much work went into making it. If a song is twice as long, it doesn’t take twice as much work. It takes, like, five times as much work.”

In the spring, the current lineup of Built to Spill will set out on a European tour to mark the 20th anniversary of Keep It Like a Secret. Despite having meticulously recreated Perfect from Now On on the road back in 2008, the plan this time around is different. “With the Perfect from Now On shows, we played with all the original people that were on the record,” Martsch says. “Now, I’m not playing with any of them anymore, so we’re not too concerned about recreating the record as it was recorded. We’re doing our version of it. These new shows are just a nice opportunity to do something that the fans might appreciate. The reason behind it is knowing what they’re going to get at the show.”

As the band begin practicing for those dates — and the 20th anniversary of Keep It Like a Secret continues to be as worthy an excuse as any to spread its good word — one can’t help but wonder: does Martsch, an artist once again totally free of contractual obligations, have any hang-ups about his band widely being deemed indie rock royalty? “It doesn’t matter to me, not even a little,” he says, with a laugh. “I also don’t mind being compared to certain bands. I like a lot of the bands associated with us, so it doesn’t bum me out at all. I’m always more interested in people listening to it and liking it. If someone likes it, I’m psyched about that. If they like indie rock, and that’s what they like about it, that’s great. If it’s because of something else, that’s great, too.”

Pick up a copy of Keep It Like a Secret here… 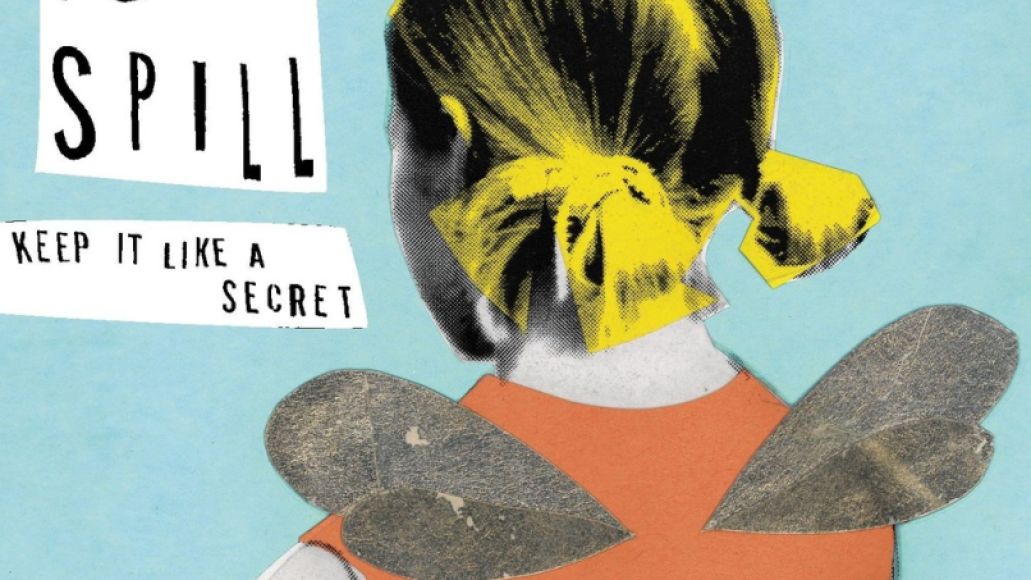