Isn’t it neat how one of the words that people use to describe extremely important, groundbreaking, pioneering historical things is “seminal?” You know, like semen. I think it’s neat.

Green Day’s Dookie, released on Feb. 1, 1994, and celebrating its 25th anniversary today, is a seminal album, in all senses and meanings. With it, singer and guitarist Billie Joe Armstrong, bassist Mike Dirnt, and drummer Tré Cool brought three-minute punk songs with power chords and grody teenage lyrics back into the mainstream rock charts, which at the time were dominated by the moaning and wailing likes of Pearl Jam and Stone Temple Pilots. It peaked at No. 2 on the Billboard Charts and sold over 10 million copies before the ’90s were over. It paved the way for a punk rock resurgence and clearly established the attitude of an entire generation branded X. It also has lyrics about semen.

Even more than seminal, Dookie is an ejaculatory album. It really is. And even though I am a woman who will almost certainly never produce anything seminal (biologically or otherwise), Dookie is my favorite fucking album of all time.

I got so lucky with Green Day. One echoing, robotic opening line and angular guitar riff into “American Idiot” and I was hooked at age 12, urging my dad to load every single Green Day song onto my little mp3 player, even though he said they were “raunchy” and would’ve preferred that I stick with Rush. From then on, it was Dookie on repeat constantly, even though the album title made me embarrassed, and I didn’t like saying it out loud. Okay, I still don’t like saying it out loud. It’s crass toilet humor, what I considered “boy humor” as a teen, the type of language that isn’t explicit but is somehow more startling and cringeworthy than any curse word.

One thing a lot of people might not know is that from the band’s earliest days performing at 924 Gilman Street, they had an unusually gender-balanced crowd. In fact, in an interview for Jack Bouleware and Silke Tudor’s book Gimme Something Better: The Profound, Professive, and Occasionally Pointless History of Bay Area Punk from Dead Kennedys to Green Day, Armstrong sheepishly recounts that “it would be about 75 percent women” in the crowds for early Green Day shows. “A lot of our songs were about girls. We got a lot of shit from other bands because we had love songs. But I wanted to sing about truth and where I’m at, my relationships with people, or lack thereof.”

That attitude struck a chord or three with early fans in the Bay Area scene, during the era of 39/Smooth and Kerplunk, when Armstrong opined about events like locking eyes across the library or feeling 2000 light years away from a crush in his nasally Cali-Brit mishmash vocals. And I’m confident in saying it’s what made Dookie, the band’s “sellout” major label debut, a worldwide smash.

Ranking Every Green Day Album From Worst to Best

The 15 tracks of Dookie, which collectively clock in at just under 40 minutes, are rich, concentrated doses of youthful emotion, cutting right to the point and looking you straight in the eye at a time when almost no other rock or popular music was willing to do that. A lot of writing about the album zeroes in on the songs’ expressions of bratty teen rage and frustration, its sneering immaturity. And for good reason. Dookie cohesively captures the feeling of being lost and pointless, of feeling like burning out is rebellion. The album’s opening line is “I declare I don’t care no more.” “Welcome to Paradise” celebrates grimy squat living. On the chorus of “F.O.D.”, Armstrong very uncasually barks: “I’m taking pride in telling you to fuck off and die!”

On Dookie’s 20th anniversary, Billboard did a song-by-song review of the album, and it’s the perfect example of why so many critical discussions of Green Day and their music drive me up a wall. Of the song “Basket Case”, the writer says: “It became one of ‘Dookie’s biggest hits, with Green Day’s slacker fans relating and singing along.” But “Basket Case” isn’t about “slacking”; it’s an anthem about exactly the opposite: panic and anxiety. In a 2014 interview with Rolling Stone, Armstrong describes the theme of many of the songs on the album, including “Basket Case” and “Burnout” as being like “you’re looking for someone to acknowledge your insanity.” That desperation to be recognized for who you are and what you’re experiencing, because maybe you’re able to make yourself seem normal and fine to most people, that’s a lot more like what I and other fans hear when we listen to “Basket Case”.

Moreover, tune in anywhere on Dookie and you’ll find humor and silliness, but you’ll also find flawless, sharp instrumentation and savvy language skills. Dookie is not elegant. Nothing about it is. But it is whip smart, and it works hard. Billie Joe Armstrong has spoken many times about how he intended to be a professional musician as early as 10 years old, how he was willing to do the work to make it happen. The band didn’t sound so damn tight and catchy for no reason; they wanted to be great, and they weren’t embarrassed about striving and trying to get there — even when that meant growing out of the scene they grew up in. If the members of Green Day are slackers, they’re the most ambitious, hardworking slackers I’ve ever seen.

Dookie landed as hard as it did, with as many young people as it did, because Green Day’s lyrics, and the delivery mechanism of truly melodic punk, tackle a whole heap of emotions with a wry self-awareness and tenderly brazen honesty, and they dare the listener to be creeped out while also suspecting (knowing, deep down) that these fundamental personal experiences are universal.

Indeed, unlike a lot of other rock bands in the ’90s, Green Day is not remotely macho; they say as much in a 1995 televised interview with Much Music. “I don’t think we’re capable of being macho to tell you the truth … It’s pretty disgusting,” Armstrong says. The singer has also spoken multiples times about how the heartfelt Dookie song “Coming Clean” (With lyrics like “I finally figured out myself for the first time/ I found out what it takes to be a man/ Mom and dad will never understand/ What’s happening to me”) is about his journey to understanding his bisexuality.

In October 2018, the members of Green Day posted several photographs on Instagram of their early years in which they are wearing dresses, skirts, and makeup, and an unsourced but very popular quote attributed to Billie Joe Armstrong goes as follows: “What do you mean we walked around in girls clothes? We walked around in dresses, and they happened to be ours!” (Fellow Green Day fans, help me out! I know you can find out where that quote came from.) In later years, the band would write the song “King for a Day” about crossdressing.

And the romance, oh the romance. On many of Dookie’s tracks, Armstrong and crew carried through with the complementary themes of love and self-loathing; the brutal torrent of physical suffering (“broken bones and nasty guts”) described in the love song “Pulling Teeth” serves as a perfect example. “She”, one of the Buzzcocksier songs in Green Day’s extremely Buzzcocksian ouevre, asks questions to the subject, inquires about how she’s feeling (“Are you locked up in a world that’s been planned out for you?”), and offers real, sincere listening: “Scream at me until my ears bleed/ I’m taking it just for you.” Love is sacrifice, and sometimes girls need a safe place to scream. That’s some insightful punk rock right there, especially considering that at the time of Dookie (long before American Idiot), the punk scene looked askew at Green Day for the absence of politics in their lyrics.

Ultimately, the album layers all kinds of embarrassing feelings like this one on top of another, ultimately providing a type of liberation that comes from airing out your dirty (crusty, stinky, hand-me-down) laundry. What could be more charming, more vulnerable, than the conceit of “Sassafras Roots”, which acknowledges that Armstrong and the object of his affection are both “wastes” with “nothing else to do,” but still asks in the most winkingly bashful tone, “May I waste your time, too?”

Essential Tracks: “Basket Case”, “She”, “When I Come Around”, and “Burnout”

Pick up a copy of Dookie here… 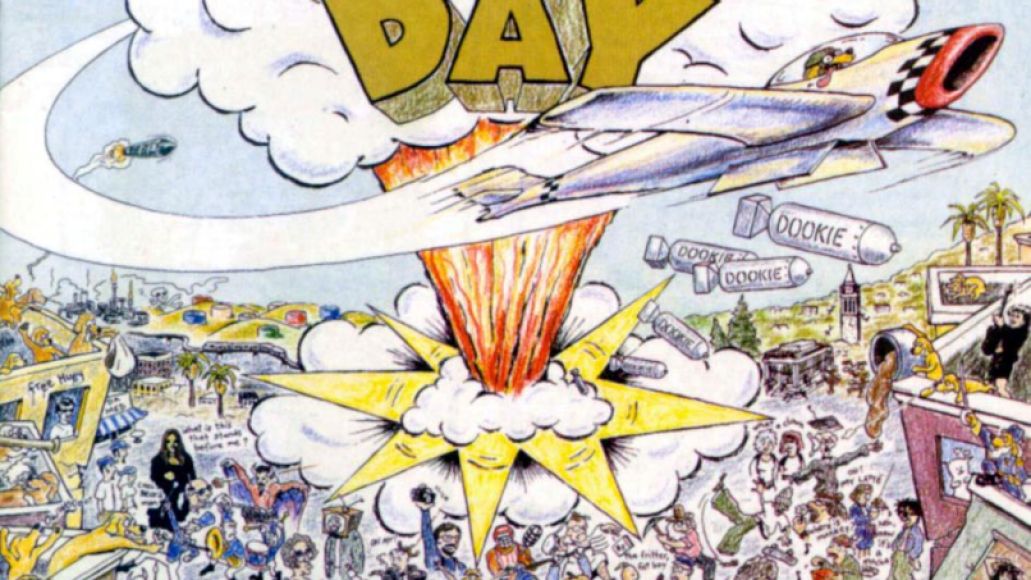 Steven Page on Broadway and a Potential New Album