Track by Track is a new music feature in which we task artists with breaking down each song on their latest full-length release, one at a time.

Julia Jacklin doesn’t harbor any misconceptions about the tone of her latest album.

“The record is not exactly a fun record, as a whole,” she said during a call last month.

At the time of that chat, only a few people in the world had heard that effort, Crushing. That limited audience suited the songs, which were recorded in Australia’s bucolic Grove Studios with the help of producer Burke Reid. After all, the unguarded confessions and narratives found in abundance on this new LP are the same things that add the thrill to the act of reading an unlocked diary.

A month later, and unlike most diary entries, the songs of Crushing are ready for a wider audience, one that’s likely to find solace in Jacklin’s tales of heartache in all its facets. On Crushing’s earliest highlights, Jacklin wrestles with the wearying realities and infuriating indignities that come with being a woman in the 21st century; tracks like “Head Alone” and “Body,” in particular, reclaim a personal narrative from the disorienting reality of a world in which women’s control over basic physical safety and existence is often stolen by men looking to do them harm both passive and active.

Jacklin’s insights remain sharp as the record progresses, in particular during songs that find her deviating from the expected path to chart her own (sometimes messy) course. Whether she’s leaving a relationship with a man she still loves (“Don’t Know How to Keep Loving You”), practicing self-care by ignoring her friends’ self-care advice (“Pressure to Party”), or redefining the vulnerabilities that lie between physical and emotional intimacy (“Good Guy”), Jacklin’s trust in herself emerges a little stronger in the wake of every waver.

Take a listen below. You can also grab more vinyl from Jacklin over at ReverbLP.

Crushing may not be a “fun” record, but it’s already among 2019’s highlights, and made even better by the insights Jacklin shared during our chat together for the latest Track By Track. Above, listen to our full audio interview to find out what microaggressions have in common with chili, how the video for “Head Alone” got its striking visuals, and why a studio intern ended up playing one of the most memorable parts on the new record. A condensed, text-based preview is below.

“Body”:
I think I used to think that communication was the key to everything, you know? I thought that if you could only communicate how you feel to people, that everybody can come to some sort of understanding. It was just such a young, naive thing to think, because I realize now that everyone is different and everyone has had very different life experiences, and sometimes people cannot put themselves in your shoes […] especially when it comes to the problems that women deal with.

I think I got to a point where I was like, I can’t try and explain to people anymore what it feels like to sometimes be a woman, and the things that are very specific to our experience in the world. […] I just was a bit exhausted by it, and kind of playing into that idea of like, “Well, I guess my life and my body is meaningless to some people.” [The outro] is also a phrase that really changes, in my mind, a lot — sometimes it can feel really powerful to me, and other times it can sound really defeated and sad.

I sell my merch a lot, and I really, really enjoy meeting people who come to the shows. I’ve had some incredible interactions and conversations, but there have also been many times when people have kissed me on the face, quite close to my mouth, or really wanted to touch [me] or hug [me] or rub [my] back.

It’s like, you want to give people what they want, you want to be the nicest person to people because there’s always that fear of letting someone leave a show without having a good idea of who you are, or whatever, but then you start to realize that [you’re] already giving so much on stage every night, and that [you] can’t give any more than that, and that it’s ok to set boundaries.

“Pressure to Party”:
Heartbreak is so messy, and it makes all of us act badly, whether or not we broke up with somebody or were broken up with. Not necessarily badly, but we’re just not our best selves. It’s painful and it’s embarrassing and it’s humiliating and it’s awkward. And it’s world-changing! You’ve gone through a big period of your life with somebody else, and then suddenly they’re not there.

I think we all have the tendency to give advice, and seek advice, as well, to make ourselves feel better, but everyone’s experience is quite different. […] Sometimes, I just wished that we could acknowledge that it’s just going to feel really bad for a significant amount of time, and then it will ease, but we all want to help each other. […] All of this advice is so confusing. You’re listening to it all and following some of it. […] I just don’t think any of us know what to do.

“Don’t Know How to Keep Loving You”:
A lot of the time, I’m motivated to write songs that I feel like I need to hear. I think that, even though there are a lot of songs out there in the world about heartache, I don’t feel like I often hear songs that are talking about the heartbreak of falling out of love, or from the perspective of someone who’s ended a relationship but is still in a lot of pain. […] Just because you’ve ended something doesn’t mean you’re not devastated from losing that person.

“When the Family Flies In”:
I lost a good friend of mine a couple years ago, and it was incredibly sad, for a lot of people. I obviously write songs to process things, but I find death very, very difficult to put into a song because it’s so huge in a way that nothing else is. To try and reduce those feelings into four minutes seems really trivial and not at all weighty enough for what a huge shift and loss it is. This was kind of the only song I was able to write about that situation. I don’t even know if I’m really going to play it live that often.

“Convention”:
I used to play [“Convention”] on guitar. The only reason it’s on piano is that I had a little panic in the studio. It just wasn’t working. […] It just did not feel right on guitar. […] Burke, the producer, was like “let’s do it on piano,” and I was really hesitant, because I don’t play piano, so I can’t hear it. I think of Adele or something. Adele’s great, but not, obviously, my thing.

[Burke] was really wonderful. He muted the piano, and he miked it from really far away, so it doesn’t have that clean, crisp, right-in-your-ears piano sound. The guy that’s playing is like, the 16-year-old studio intern. […] Dom, lovely Dom, who was making our coffees every morning, jumped on the keys, and it just worked. That was definitely not the plan, at all. Thanks, Dom!

I think “Good Guy” is just a song where you’re like “Yeah, I’m not the best version of myself right now, and I know that I’m better than this, but I just want to be thought of, I want to be touched by someone, and that’s ok.” It doesn’t have to feed into the narrative of getting better or you being a better person or moving on. 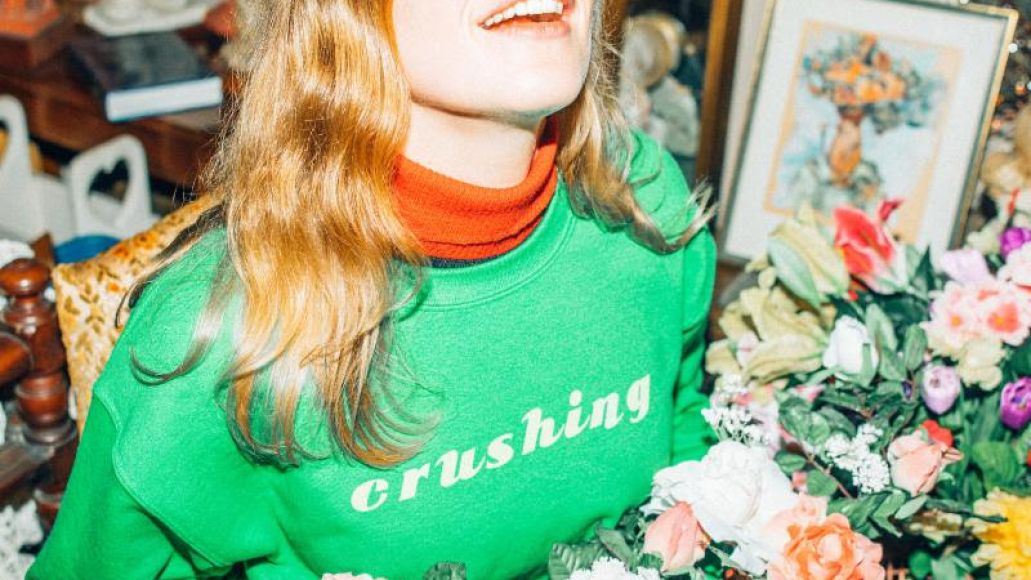 “You Were Right”:
This is probably the angriest song. I’m not really an angry person, and I don’t think my music is really angry, but I guess […] I felt like those sentiments could only be expressed in a short, sharp song. I wasn’t really sure where to put this song on the record, because it just kind of punches out in the end, unexpectedly. There was nowhere else to put it. Hopefully it provides a bit of respite from what surrounds it.

“Turn Me Down”:
[“Turn Me Down”] took a really long time to get right. The arrangement just wasn’t working and I guess, listening to it, the structure’s quite odd. So, trying to get that right was really difficult. We recorded the whole thing, it was done, and then my producer Burke was like “I just think we can do this differently, and better.” […] It was really good, working with him, because it made me be like, “Man. This guy totally has my back making this record.” He wouldn’t let me be lazy. He was very much like, “We are going to make the best record we can make. It doesn’t matter if it’s going to kill us all.”

“Comfort”:
Initially, the song title was “A Song to Comfort Myself”. That was in my phone. I sent it to a few of my friends who were going through a similar thing to me at the time, and I never intended it to be on the record. It was just one of those songs, like, “Aah! I need to do something with these feelings and I need to make myself feel better.”

When we got into the studio, it was just one of the songs on the back burner. I knew I had it, but I wasn’t sure. When I recorded it, it just felt right. I’m not sure why. It is a real song to myself. It just sums up, to me, the feeling of the record. Like, even though this is all painful, you’re going to be alright. It’s not the end of the world. You can’t be selfish in this moment. You have to grow up.