While Morton handles all guitars on the album, he got instrumental help from Alice in Chains’ Mike Inez, Megadeth’s David Ellefson, Korn’s Ray Luzier, and more.

Heavy Consequence caught up with Morton to discuss the album, the various contributors, the latest on Lamb of God, and more. Read our interview with the guitarist below, and pre-order Anesthetic at this location.

On the genesis of his solo album, Anesthetic

Early in, it was just basically me sort of writing songs and collecting songs that were pretty clear to me weren’t going to fit in the framework of Lamb of God. So, I was writing these songs — I’m sort of in a constant state of songwriting, and this stuff started popping up and popping out where it was obviously wasn’t going to be in that Lamb of God lane. But I felt that the tunes that were coming together were pretty cool and worth developing.

So, I played some of this stuff for my longtime producer Josh Wilbur, and he agreed that we should develop some of this stuff. So we did a little pre-production, and got in his studio and started fleshing out some of these songs, and it started to feel like it’s own thing, started to get it’s own personality, just a few songs in. And then Jake Oni got involved, and we just started running with it, and it became Anesthetic.

The philosophy was the same across the board, which is as we would sort of get an outline or a demo of a song, Josh and I would kind of sit back and envision, “If we could pick anyone, who would sing this song?” We sort of took any doubt out of it and made the list, and that’s how we wound up with someone like Chester Bennington on the album. At first, we were like, “Man, we can’t get him,” but then we tried and we got him — he loved the song. Same thing with Mark Lanegan. He’s one of my favorite singers ever, and I didn’t know Mark, but I just reached out, and he said, “Send me the song,” and when he heard the song, he wanted to be a part of it.

Some of these artists were friends of mine. Randy Blythe is one of my best friends in the world, so that was a quick text message, and he was in. I was friendly with Myles Kennedy through the Slash camp, so that one was pretty easy to put together. In some cases, it was sort of cold calls, reaching out to people who I had never really corresponded with, and in some cases, it was close friends.

On the song “Cross Off” with Chester Bennington, and what it was like working with him

My experience with Chester was pretty much limited to our collaboration on this song. And I can tell you from that experience that he was incredibly excited about music, very motivated about making and creating music. He was super energized about this song in particular. The idea of doing something in a heavy style and being able to scream again was something he was thrilled about. I don’t think he’d done that on a record in quite some time. He was genuinely excited about that.

Creatively, it was pretty instant between us. We didn’t really know each other. We corresponded a little bit, but we didn’t know each other when we started working on the song, on a personal level. Writing music is a pretty personal, kind of intimate process, a lot of times because of the subject matter you’re dealing with. So what was astounding to me was how quickly Chester and I gained a creative trust, working on the lyrics and talking about the things we were referencing in the lyrics. He was very open, very genuine, very generous with his talent and his creativity, and he was a pleasure, and awesome to work with.

And his technical ability, when we started recording, was just absolutely amazing. There weren’t really any bad takes, but sometimes he’d ask to change a note here and there, or a pitch or an inflection, to try a different style. He could take suggestion or direction so well, and instantly execute what was being asked of him, on a technical vocal level, so that was pretty astounding for me to watch. I just have a lot of fond memories about working with him on this. He was just a great dude — a super-devoted father and husband, and we talked about our kids. Just a good dude, man.

On the Mark Lanegan track “Axis”, which sounds like it would fit on a Quentin Tarantino film soundtrack

I like that you say that, because it does have this atmospheric, sort of soundtrack-y feel to it. I agree with you on that. So, that song had an interesting process. First of all, Mark Lanegan is one of my favorite singers. I’m old enough to be a Screaming Trees fan, and I love his stuff with Queens of the Stone Age, and all of his solo work. In particular, his album Bubblegum is one of may favorite albums.

I didn’t know Mark at all. I was just a fan of his work. That was kind of a cold call. Again, like I told you earlier, we would sit back and listen to outlines of songs and demos, and figure out who we would like to sing on each one, and Mark Lanegan was at the top of my list. I figured I’d reach out and have my people call his people, and as it turned out, he was willing to listen to the song, and he heard it and was down to do it.

The interesting thing about that song is that the version that I sent him originally was drastically different than the one you hear. I sent him an initial version of the song, which he liked, and tracked a vocal to, but in hearing his vocal, it sort of changed my perspective on the song. I did something I’ve never really done before, which is I rewrote the song to his vocal, and changed it pretty dramatically, and that’s the version you hear on the album. Of course, I had to go back and OK it with him, but he dug the revision, as well, so that was cool. So, that’s the version of “Axis” you hear on the album.

On working with hard-rock singers like Josh Todd, Jacoby Shaddix, and Myles Kennedy

They’re all very different vocalists, all with unique styles, and particularly great at what they do. I’m a fan of rock music. I’m known for my work with a heavy metal band, and I love heavy metal and genuinely appreciate the genre, and it’s given me a home and a career, and I love it. But I also like really good rock music, too. I’m a big hip-hop fan — I like all kinds of music, so I appreciate a well-written song, and great singers. In that sense, it wasn’t a stretch for me to include these more kind of rock guys.

“Back From the Dead” — that was one of the first songs we put together, and to pick Josh [Todd] made sense to me, because it’s really got that sleazy kind of rock, L.A. rock kind of feel to me. He’s the first guy I thought of. I knew someone who knew him, so I hit him up, he took one listen to the song and hit me right back and said, “I’m in.” And a couple days later, he sent me a demo, which is basically the song that you hear.

The same goes with Jacoby. I’ve known Jacoby for years, and the Papa Roach and Lamb of God camps are pretty friendly, just from having done festivals and stuff together. I didn’t hear anybody but Jacoby singing that song [“Sworn Apart”]. And really, Myles, as well, [on “Save Defiance”]. That was really the process of picking people, particularly vocalists, on this album, was just me and Josh Wilbur sitting back, and saying, “Who do we hear on this track?”

Honestly, initially at the very beginning of the project, I wasn’t going to put any traditional heavy metal songs on the album, because my thinking was, I do metal with Lamb of God, the reason for this album is to process some of these tunes that aren’t so much metal for me. Josh Wilbur suggested that we do include a couple of metal songs on the album — the thinking being that Lamb of God fans are going to listen to this album, and want to hear some metal from me. So, pretty early on, we decided to deliberately include some metal tracks.

What really turned out cool is that it became this duet with Randy and [Arch Enemy’s] Alissa [White-Gluz], and it was exciting to see how great their voices sound together. It kind of had this synergy when they came together in the chorus, which is really cool.

On the instrumental contributors like David Ellefson, Mike Inez, and others

Mike Inez played on about half the album. Mike’s an old friend, and he was playing with Alice in Chains where I live in Richmond, Virginia, and I went to see the show, and I caught up with him after the set, and we were literally standing on the sidewalk, and I was like, “Man, I got this solo thing I’m working on. I want you to play on a song or two.” And he was like, “I want to play on more than a song or two”, and that was that. I’ve known Dave Ellefson for years, he’s a friend.

I don’t want to discount how generous these men and women and were with their talent, but at lot of times, in cases like that, it was people who are friends, or people who I’ve gotten to know through touring over the years. And I was just kind of flattered and humbled that they’d even want to be a part of this, but there was just a lot of good will going on.

On the progress on the next Lamb of God album

I can tell you that there’s new material that we’re starting to put together, and it’s got it’s own energy, and there are a lot of ideas bouncing around, and we’ve definitely been actively working on that lately. I can’t give you a timeline. I can’t tell you 2019, 2020, ’cause I don’t know yet, but definitely some new Lamb stuff coming together and feels really good.

I don’t worry so much about that at this stage. Lamb of God has been a band for a couple of decades or better now, and our creative process is pretty firmly in place. I feel like Lamb of God still has a lot left to do, and I know for a fact we’re still very motivated about new material and energized about what we’re capable of doing next. In terms of the side projects, it depends on the situation. If you’re doing a side project out of spite or frustration, maybe that’s not a positive thing. I don’t think that’s ever been the case in our band. 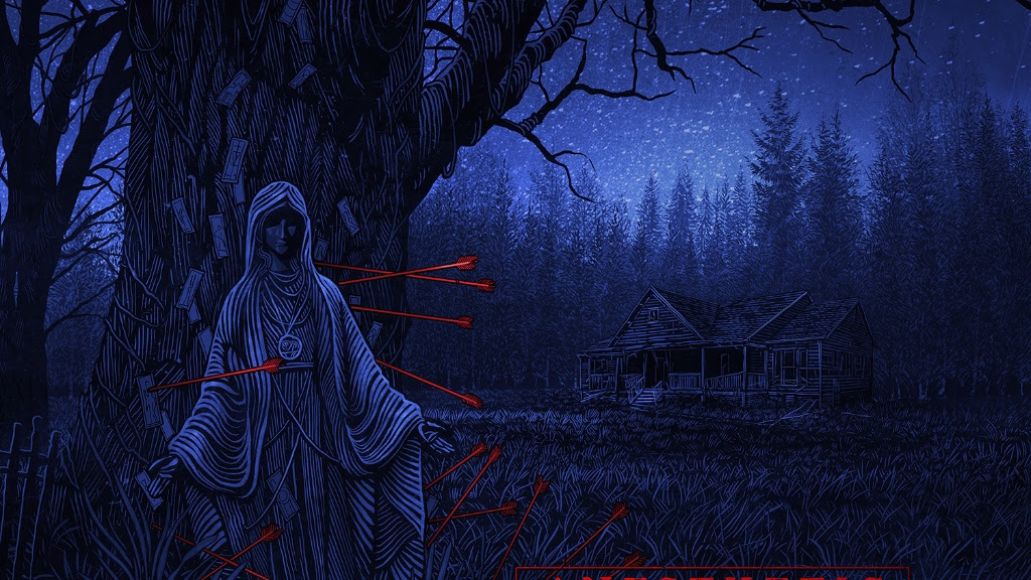 Lamb of God's Mark Morton on Working with Chester Bennington, Mark Lanegan, and More on Anesthetic