Setting the Stage: The Brooklyn club Warsaw was an ideal place for a sold-out Daughters show. The rules feel slightly less enforced at this concert space, which has the charm of an old cafeteria and community center that’s been gutted and turned into a music hall. In fact, the venue still serves pierogis and kielbasa at a cheap price during shows. Footage of prior gigs from Daughters’ tour promised an element of chaos, and on this night, both the band and the crowd took advantage of the leeway to enjoy themselves.

Taking the Stage: New York electronic artist Container opened the night with a dissonant set of glitch and noise, an apt prelude to the generally brutal tones to follow. Playing their final date alongside Daughters, Montreal drone metal trio Big Brave previewed their forthcoming Southern Lord release, A Gaze Among Them, in massive fashion, playing a large portion of the new record. Guitarists Robin Wattie and Mathieu Ball were running through bass and guitar cabs simultaneously, and the resulting frequencies were bone rattling. The songs appeared to be even more spacious than their prior work, assuming a ritualistic quality. Albeit heavy and loud in the general sense, Big Brave have the ability inherent in all worthy drone metal acts of remaining ambient and pastoral at brutal volumes. The duality of their slower tempos versus Daughters’ urgency helped pace the show and varied the sonic palate.

The lights dropped and a 30-second silence preceded Daughters’ set, like a long aural breath before the onslaught. It served to build the tension. As the band emerged, dressed in dark button ups, the crowd waited with boiling restraint. The band’s latest album, 2018’s You Won’t Get What You Want, achieved critical praise that brought with it a new contingent of fans. In a neurotic era of palpable despair, Daughters created a record that channels the existential frustrations of modern existence — a raw piece of art that is relatable in its directness and meditative darkness. There was a reverence in the audience, which had since filled Warsaw to capacity. It was obvious they loved this band, and they weren’t going to stand still and watch apathetically. It made for a joyous hour of crushing music.

From the first note of opener “The Reason They Hate Me”, the pit launched into a seismic slam dance, as if commanded by the heavy grooves of what is arguably Daughters’ catchiest song. The band was equally as active, following their chaotic and charismatic frontman Alexis Marshall, who completely lost himself whenever there was music playing, whipping himself with the mic cable, gagging himself, spreading saliva through his buzzed mullet, and rhythmically contorting his gangly physique.

During the second song, a young aggro crowdsurfer kicked his way onstage only to be dragged by Marshall and ejected side-stage mid-song. “Let me tell you what went on there,” Marshall explained later to the audience. “We’re all here to have fun right? Don’t kick anyone, spit on anyone, or hurt anyone, or I will kick you out of here myself. Now let’s have some fun.” Thus he declared a friendly mosh that resembled the punk shows of bygone days. The bouncers let the action unfold while young fans rode back and forth across the crowd, onto the stage, and back again.

The band revisited a series of old songs during the middle of the set (“The Dead Singer”, “Recorded in a Pyramid”, “Our Queens”, “Daughters Spelled Wrong”), bringing a new energy to them through their current touring lineup, which features auxiliary percussion and sample triggering from Lisa Mungo and rhythm guitar from Gary Potter. The sound was harsh and huge. Drummer Jon Syverson’s mathematic accuracy allowed each member to lose themselves in their respect part. While Marshall worked the stage, Potter and longtime guitarist Nicholas Sadler were in a constant state of motion on either side, moving their entire bodies with the downstroke of each riff.

The eight songs in the setlist from You Won’t Get What You Want were thrilling to hear in this live context. The full force of their dissonance could be felt — thanks to a massive, bass-heavy house mix — as well as heard, bringing the audience closer to the emotional core of each track, which can differ vastly from song to song (especially on the aforementioned album). Perhaps it’s the catharsis that goes into playing these songs that creates the portal of shared experience between performer and audience — occasionally lost during larger venues shows like this one, where the band seem like icons on a pedestal. Instead, Daughters let the crowd experience the visceral release of their music on a personable level.

The final barrage of “Guest House”, “Daughter”, and “Ocean Song” acted as a conclusive release. Marshall slung the microphone like a mace, slamming it into the stage multiple times. Then he smashed it against his forehead to cue the breakdown. As his band departed the stage after the last song, he stood solitary, repeating the final refrain: “To know, to see for himself/ If there is an ocean beyond the waves, beyond the waves”. He jumped into the crowd twice, still repeating the words.

After returning to the stage, he spoke the refrain one last time, then spiked the microphone and walked off. When the lights rose, the crowd stood motionless for a few seconds, fatigued and unable to react. They departed the venue with looks of satisfied exasperation.

Photo Gallery – Daughters, Big Brave, and Container at Brooklyn’s Warsaw (click to enlarge and scroll through): 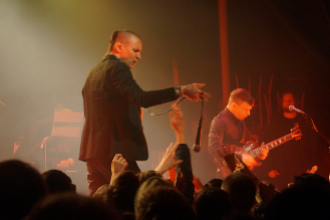 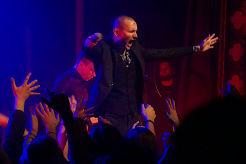 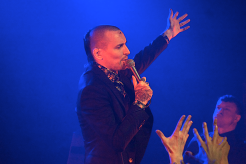 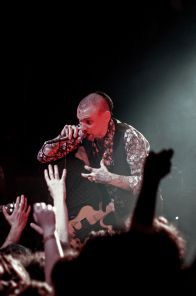 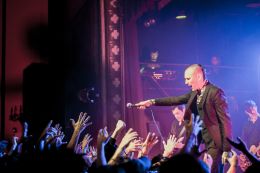 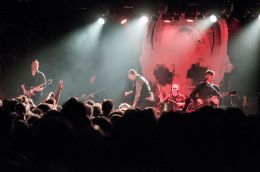 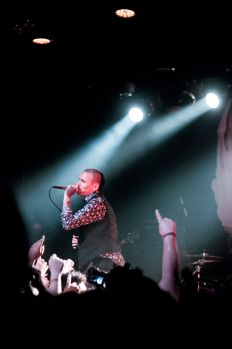 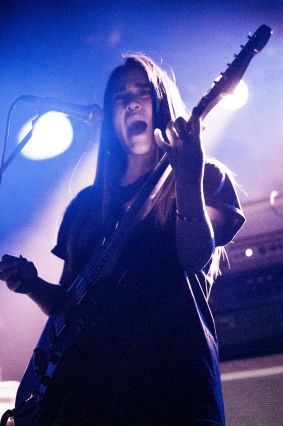 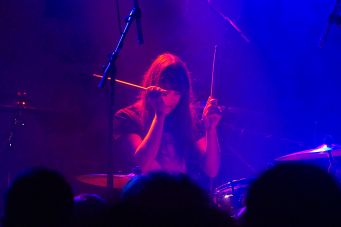 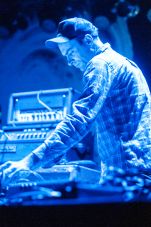 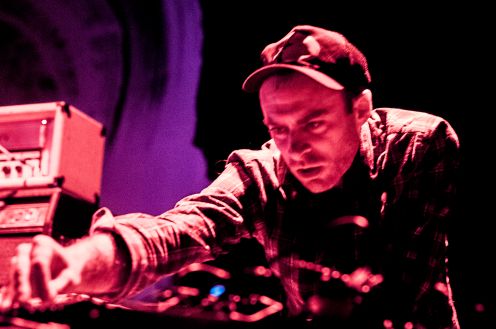 Daughters setlist:
The Reason They Hate Me
The Lords Song
Satan in the Wait
The Dead Singer
Recorded in a Pyramid
Our Queens (One is Many, Many are One)
Long Road, No Turns
Daughters Spelled Wrong
Less Sex
The Hit
The Virgin
Guest House
Daughter
Ocean Song

Halestorm Unharmed After Tour Bus Is Destroyed by Fire