Filter were set to play the Speaking Rock Casino in El Paso, Texas on Thursday night (March 7th), but an effort to promote the show by the band on social media, and an image of an upside-down flag on the industrial rock act’s video-screen backdrop led the venue to nix the gig at the last minute.

Shortly before doors were set to open, the band shared video of their soundcheck on Facebook, with frontman Richard Patrick quipping, “This is sound check!! We’re Playing El Paso!!! Get Here!!! Later and it will he packed!! A lot of Trump bashing! Does anyone know Beto?? Bring Beto!”

Apparently, the venue didn’t take kindly to Patrick’s post, as the club’s general manager and a number of security guards stormed into the green room and told the band they were no longer welcome. The venue’s staff said they had received bomb threats over the anti-Trump message. Moreover, they were displeased with the image of an upside-down American flag that Filter planned to display on their onstage video screens. “The First Amendment does not exist in this Casino. Get the f@*k out,” the club manager reportedly said.

After Filter’s gig was canceled, the band and Patrick gave their take on the incident on Instagram:

Speaking Rock Casino in El Paso, TX, the Tigua Tribe’s Casino / Resort / Music Venue has cancelled tonight’s FILTER show, due to a humorous Facebook post written by vocalist, Richard Patrick, and the band’s plans to use the American flag turned upside down in their background video on stage.

The “offending” post, which included a short video of the band soundchecking at the venue:

This is sound check!! We’re Playing El Paso!!! Get here later and it will be packed!! A lot of Trump bashing! Does anyone know Beto?? Bring Beto!

The band was told the venue “didn’t like” the post and that they were getting threatening phone calls and bomb threats from Texans who didn’t like it either. The tour manager was in the green room and woke up from a pre-show nap to 30 yellow-shirted security guards and the General Manager shouting expletives and telling the band they were not welcome at the venue. “The First Amendment does not exist in this Casino. Get the f@*k out,” they said.

Management also told Patrick that it was illegal to display the flag upside down in their video. The law to which they might refer is Title 4, US Code “(a) The flag should never be displayed with union down, except as a signal of dire distress in instances of extreme danger to life or property.”

Patrick explains “This is a dire emergency! This country is totally jacked up!! This is my right to artistic expression. If they are going to tell me that I am un-American for saying that about the President, I’d ask them if they have been to Iraq or Afghanistan. I have been over there and love and respect the job that our troops are doing over there – fighting to ensure our rights to say what we like. As a matter of fact – I was asked recently what FILTER stands for and THIS IS IT – our freedom of expression!”

In addition to the First Amendment, The Texas Constitution, in Article I, sections 8 and 27 protects the “liberty to speak, write or publish … opinions on any subject.” You have the right to express your views in these ways regardless of how unpopular or controversial they may be. #firstamendment #gop #filter2019 #america”

Unfortunately due to safety concerns associated with Filter’s performance tonight we will be canceling their show. We want everyone who comes to our venue to experience entertainment with positivity, union, safety, and joy. We all have our own political views and want to respect everyone’s opinion, but our shows will not be a platform for it. We apologize for the cancellation.

Patrick has made no secret of his disdain for President Trump over the past few years, criticizing him in multiple interviews, and repeatedly on Instagram. The El Paso show was set to be the band’s last gig for a couple months. Filter are next scheduled to play Pointfest in Maryland Heights, Missouri, on May 25th.

Update 3/9: Richard Patrick spoke with Billboard about the incident, telling the magazine, “We were at soundcheck and I just took a quick video with my phone and threw up a post, kinda joking around. So that was the first thing. The club has a video screen behind the stage, and that afternoon, I was working with the lighting guy picking out images to run behind our logo, and I picked about five and one of them was an American flag. Now we have this song, ‘American Cliché,’ and at the end of it, I say Donald Trump quotes, but I do it in a bad German accent — ‘Vee have to build za wall!’ — so I told the lighting guy to turn [the flag image] upside down and make the colors all trippy and weird like it’s a bad acid trip.”

The frontman said he was then confronted by one of the club managers and eventually agreed to not use the upside down flag image. However, he added that “they just decided that they didn’t like us because of our Facebook post and they canceled the show. I was back at the hotel and our tour manager was backstage and the general manager and the production manager came in with five security guards and started yelling at him, looking for me, and they were ready to kick my tour manager’s ass if they couldn’t kick mine.”

Billboard also spoke with the general manager of the venue. Read the full interview here. 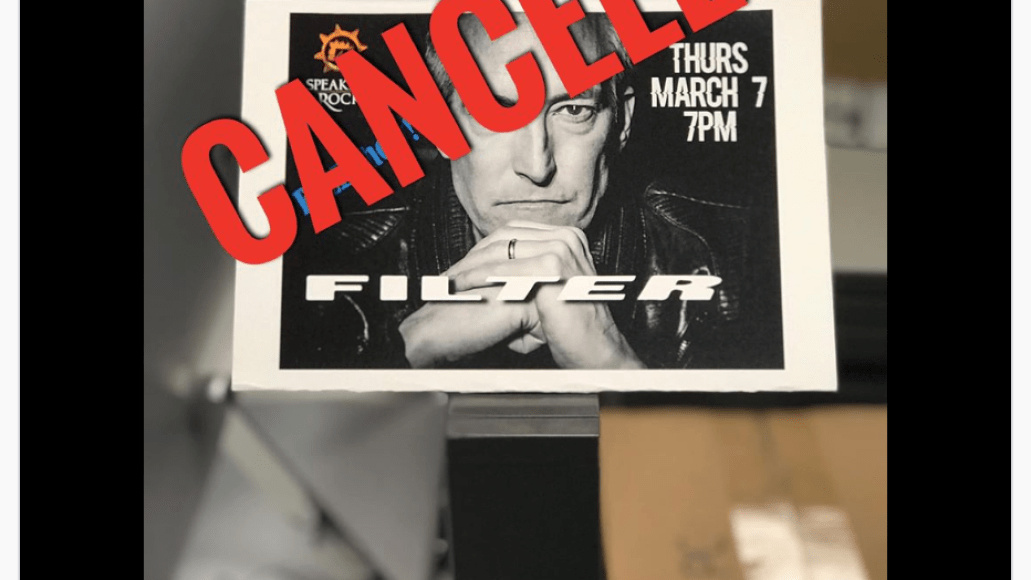