“When Adam died, we stopped being a band.”

That was a line spoken by Adam “Ad-Rock” Horovitz near the beginning of Beastie Boys Story at Brooklyn’s Kings Theatre on Tuesday night. It was the second hometown presentation of the Spike Jonze-directed two-man show, which saw Ad-Rock and Michael “Mike D” Diamond unfolding the storied history of Beastie Boys. Ad-Rock’s somber sentence was referencing their absent third member, the late Adam “MCA” Yauch, who died in 2012.

“Being a band was Yauch’s idea in the first place,” added Mike D.

While Beastie Boys Story played out essentially like a staged recap of the group’s 2018 memoir, Beastie Boys Book, those early words by Ad-Rock and Mike D served as something of a sub-thesis for the production. Playful, funny, enlightening, and at times a bit messy, the two-act story provided a truly fun and fascinating look into the creativity and career of Beastie Boys. You were likely to leave either far more knowledgable about your favorite group or a bigger fan than ever. But the most prodigious takeaway is what a remarkable talent MCA was, and how integral he was to making the group the legends they are.

The anecdotes recounted throughout the show painted a thorough and thoroughly astonishing picture of how three weirdos from New York City became hip-hop luminaries. As they discussed their earliest days meeting each other at punk rock concerts and their first encounters with the likes of Rick Rubin and the Dust Brothers, archival images of their younger selves were projected behind them. Perhaps most memorable were the photos from the Los Angeles house they rented out around the recording of Paul’s Boutique, where they discovered a wardrobe of wonderfully absurd ’70s attire that became their daily dress. 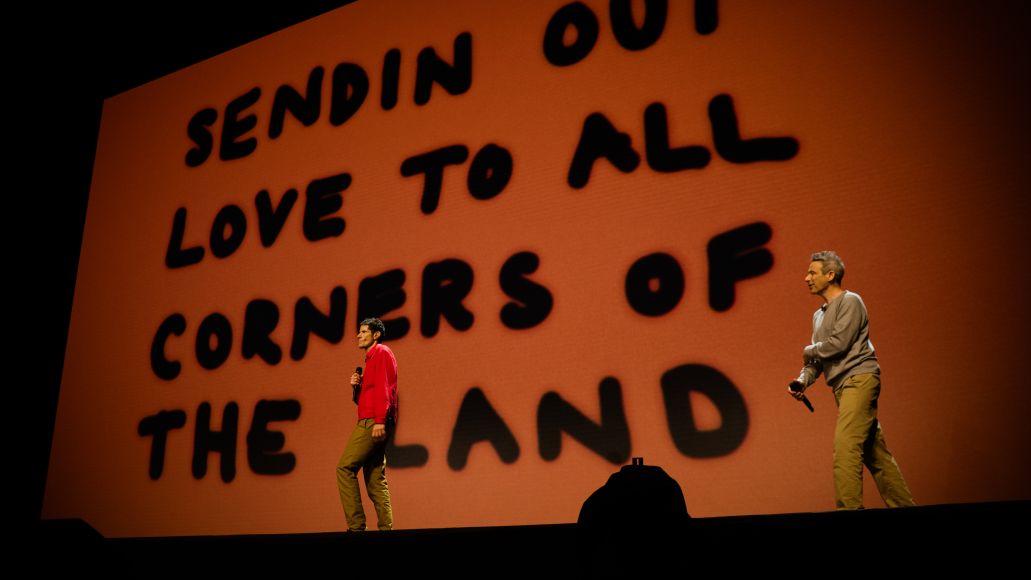 Footage periodically screened as well, like the grainy punk music video for “Holy Snappers”, or the band’s first attempt at rapping on stage while reading rhymes off the back of homework assignments. Jonze pulled out some of his more interesting directorial tricks around the use film. At one point, the camera seemed to follow Ad-Rock offstage as he recited the tale of a particular MCA prank that took a decade and a half to reveal itself. Later, a graphic breakdown of the samples used for “Shake Your Rump” illustrated just how wild the creative process around the Boutique era was.

Less successful were the tangible theatrics, where Jonze employed largely forgettable uses of props and costumes. Seeing Mike D dressed as an English bobby was more awkward than anything, even if his British accent wasn’t all together terrible. Some elements worked, though, including Michael K. Williams’ Bob Dylan impression and a recreation of MCA’s first homemade looping contraption — a two-reel tape wrapped around two mic stands and a chair. The night also saw the infamous inflatable penis from Beasties’ first headlining tour re-erected, and Ben Stiller popped in to defend the group’s sophomore effort.

Even with these flourishes, Ad-Rock and Mike D mostly had the stage to themselves. Lines were read from large teleprompters at the back of the audience, leading to some stilted delivery. Still, the whole thing was meant to feel a little loose, a little wonky, as that’s the sort of energy that defined Beastie Boys. There was space for improv, making it charmingly obvious when the two were working on unscripted bits. Although Ad-Rock’s growing disappointment with a Tuesday crowd that wasn’t as into sing-alongs and call backs as previous audiences could be distracting, he admirably kept the story moving.

As it did, touching on landmarks like opening for Madonna or putting out Grand Royale magazine, the pair also made time to take ownership of some of their low points. More than just admitting their first appearance on American Bandstand was less than artistic, they addressed their history of misogynistic tendencies. They expressed sincere chagrin for kicking founding member Kate Schellenbach out of the group when they transitioned to “aggressive rapper bro[s],” and groaned at their own lyrics in “Girls”. They even distanced themselves from Russell Simmons, a man facing numerous sexual assault allegations but inherently connected to the band’s early rise.

Despite the missteps along the way, both in its truth and its telling, the Beastie Boys Story remains deeply impressive and effecting. So often, that’s because of Yauch. While MCA’s wizardry — his discovery of the “Sabotage” bass line, the fixing of an old aviator helmet microphone to record a song, his use a 360-camera to capture the Paul’s Boutique cover — was well highlighted, it was clear his friendship had an even greater impact on the group. Ad-Rock choked up multiple times while recalling the Beastie Boys’ final show at Bonnaroo 2009, and during the final moments, he gave some of his speech to Mike D rather than speak through tears.

Watching two musical icons explain their growth from world touring partiers to innovative artists isn’t your typical theatrical experience, but Beastie Boys weren’t your typical rap stars. Their story is one for the books (literally) and their earnest, goofy retelling of it on stage proved just as sensational. Once he cleans up some of the sloppier moments, Jonze’s movie edit will hopefully be another worthy record.