Zero: That’s the number of guests that Donald Glover, aka Childish Gambino, brought out for his headlining set at Coachella. It’s also the amount of patience he had for bullshit of any form. “My shit has rules,” proclaimed Glover at the start of his set, tongue in cheek. Rule one: “You need to really feel me.” Rule two: No phones. Okay, simple enough.

From the get-go, Glover had a chip on his shoulder. After all, no matter how much of a spectacle he’s become, the Childish Gambino namesake isn’t backed up by decades of musical success; lest we forget, his debut album came out a mere eight years ago. Nevertheless, Glover was there to prove that this was his moment. He was willing and ready to earn his spotlight.

The set began with a slew of iPhone-quality interview snippets showing festivalgoers, most of them college-aged white dudes sporting jerseys, spouting barbs about Gambino himself. One of them even went so far as to claim that Gambino is a “marketable but average” artist. The effect of the clips was jarring, theatrical even, and set the tone for the entire charade. Glover was coming for the necks of his naysayers and in cinematic fashion.

Gambino’s first (unreleased) track was so triumphantly brazen that it almost seemed as though he wrote the song specifically for his first-ever Coachella headlining spot — as if his entire career had been leading up to this single, pivotal point. From there, Glover blazed through a set full of unreleased tracks, songs from “Awaken, My Love!”, and classics from his first two studio albums. The theme behind his set quickly became evident: Childish Gambino versus the world. 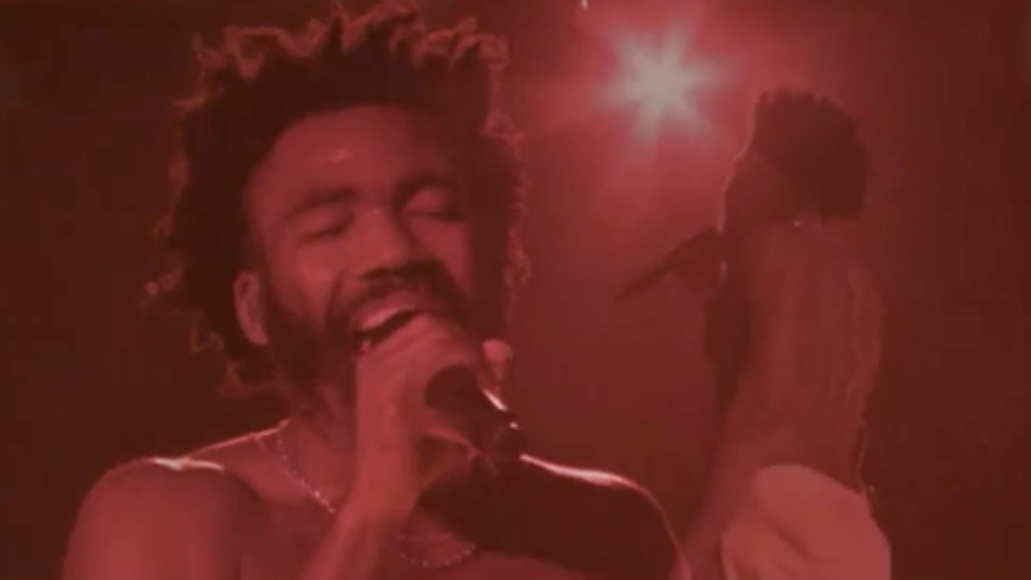 Childish Gambino at Coachella 2019 (via Webcast)

See, headlining sets at Coachella warrant a certain degree of mastery and more than a few degrees of shock value. Fans have come to expect the unexpected. Those life-changing, world-shattering experiences that are talked about for years to come: Snoop Dog and Dr. Dre’s Tupac hologram in 2012, Kendrick Lamar’s premiere of Damn in 2017, Beyoncé’s “Beychella” spectacle in 2018. The pressure on headliners, especially headliners that exist within the hip-hop/pop stratosphere, is overwhelming, and the weight of such cultural implications rested on Gambino’s chest last night. Every choice he made had a purpose, which made it all the more intriguing that he brought out zero guests.

Glover gyrated and twisted to “The Worst Guys” with one hell of a guitar solo, paced frantically between background singers in pious garb during “II. Worldstar”, and offered a stripped-down cover of Gnarls Barkley’s “Crazy” with the aide of a gospel choir.

At some point, Glover even took an extended break to smoke a joint with a fan. The ordeal must have taken five minutes. As the camera zoomed in on Glover, every minuscule expression on his face was captured, much like a film might capture the emotion of an actor — which makes more than a bit of sense for Glover, doesn’t it? Gambino’s essence was that of a drive-in theatre, and if Coachella wasn’t going to pay attention, then fuck ‘em. This was the Childish Gambino Show, and we’re going to watch as he spends his time on a joint with an eager fan. 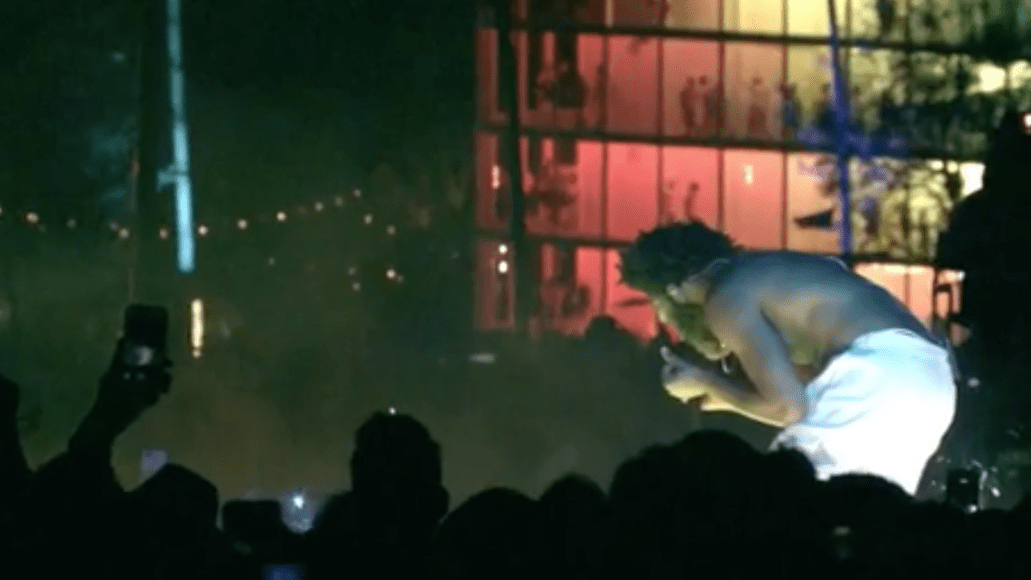 Childish Gambino at Coachella 2019 (via Webcast)

Moving through a rendition of “This Is America”, another plethora of unreleased tracks, “Sober”, “3005”, and “Bonfire”, Glover was tracked by a variety of oft-kilter camera angles that all seemed more equipped to be used in a Wes Anderson film than on a festival big screen. Ultimately, it was this kind of theatricality that carried Glover’s set to such triumphant heights.

Glover set out to create a truly idiosyncratic set that transcended the festival stage, reeling his spectators into his vision. As the iconic vocals to “Redbone” broke through, it felt as if the entire crowd was reveling in Glover’s victory. When faced with the immense pressure that such a headlining slot warrants, Glover opted out of creating a spectacle for sake of spectacle.

Rather, he invited us all to share in the experience of his glory, to become the spectacle ourselves. 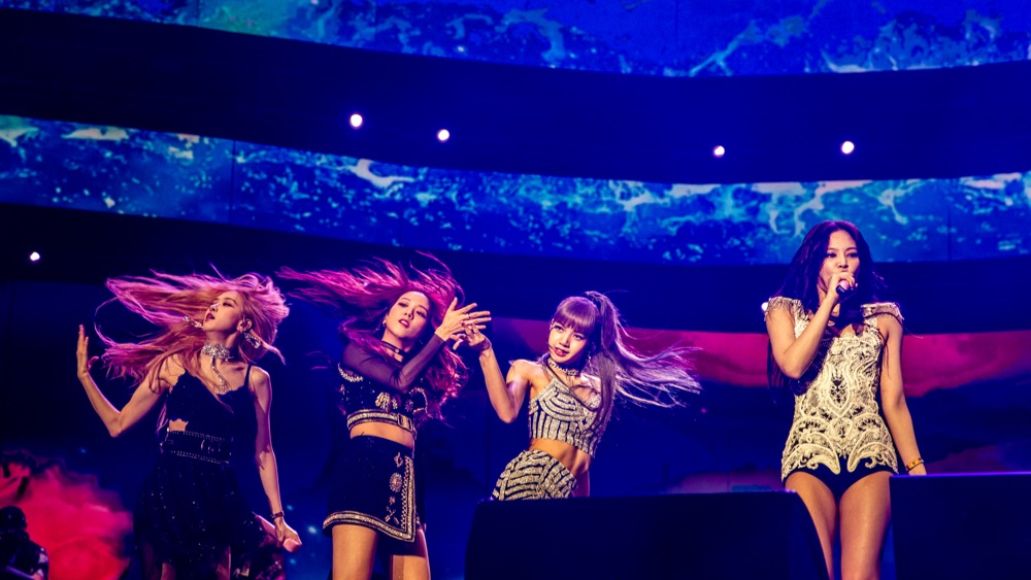 BLACKPINK is one of Coachella’s most daring gets in recent years. As the first K-pop outfit to be booked in the festival’s history, there were admittedly concerns and debates going into the weekend as to whether a.) the crowd would be receptive and b.) their arena show would translate to the festival setting. Both anxieties were quelled almost immediately: BLACKPINK’s performance was nothing less than a flamboyant expose into the genre and packed the force of a globe-trotting revue into Coachella’s EDM/Hip-Hop oasis, the Sahara tent.

Curious onlookers were drawn with a gravitational force into the locked-out tent, with the group’s thousands of hardcore stans already occupying prime tent territory. But, here’s the thing: Anyone who entered the set with even a shred of curiosity left-wide eyed and enthralled by the enormity of it all. Yet the most impressive facet of the entire spectacle was their infectious charisma. All throughout the set, the Korean superstars afforded the time to talk earnestly with the crowd, their every movement drawing a wave of cheers through a sea of bodies in one unpretentious dance party.

Visually arresting and flawlessly executed, BLACKPINK left a mark on the Polo Fields in what will soon be remembered as a turn of the tides for the festival. 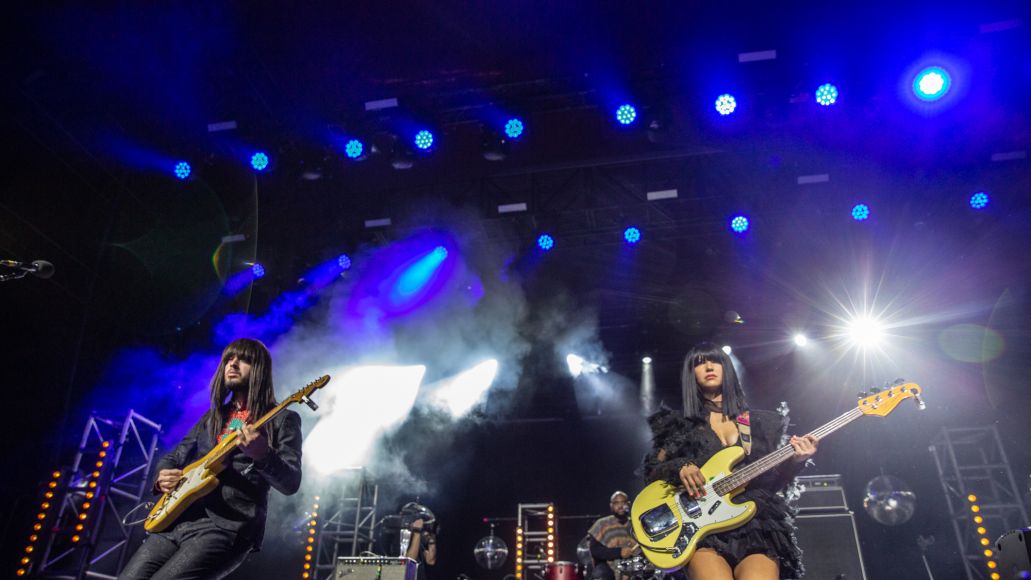 When Khruangbin, the mercurial Thai-funk outfit from Houston, blazed through the Gobi tent after dusk, they had a psychedelic mission in mind, and nothing would cause them to falter from it. Everything about the group’s performance was razor sharp, from the multiple disco balls they incorporated into their set design to the vivid colors produced by their lighting rigs to their sensual chemistry onstage.

Curiously enough, after blazing through a handful of their own staples, Khruangbin began to strum through the melodies of a flock of iconic West Coast hip-hop tracks. Beginning with Dr. Dre and Snoop Dogg’s “The Next Episode”, the group moved swiftly through Warren G’s “Regulate”, Dre’s “Ain’t Nothin’ But a G Thang”, Ice Cube’s “It Was a Good Day”, and Ol Dirty Bastard’s “Got Your Money”. To shake things up, they even tossed in Spandau Ballet’s “True” and Dick Dale’s classic “Miserlou”. Keep in mind, this all happened in the span of about seven minutes.

Point being, get to a Khruangbin show STAT! 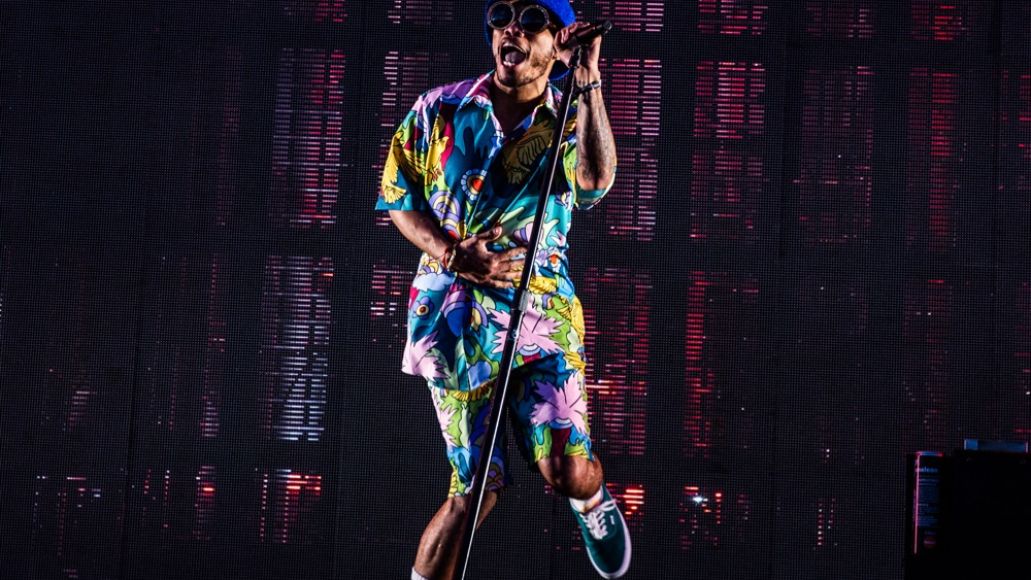 Anderson .Paak’s graduation to the main Coachella stage was yet another triumphant experience on Friday. The sundown slot proved to work well for .Paak’s sprawling setup, allowing for a binary division between both his visuals and setlist. The Oxnard native played a variety of songs from all four of his albums, even giving the crowd a first listen of the newly released tracks from his latest release, Ventura, which dropped on Thursday night. However, things turned emotional at the end when he closed out his set with an homage to Mac Miller and Nipsey Hustle in “Dang!”.

Love Will Tear Us Apart 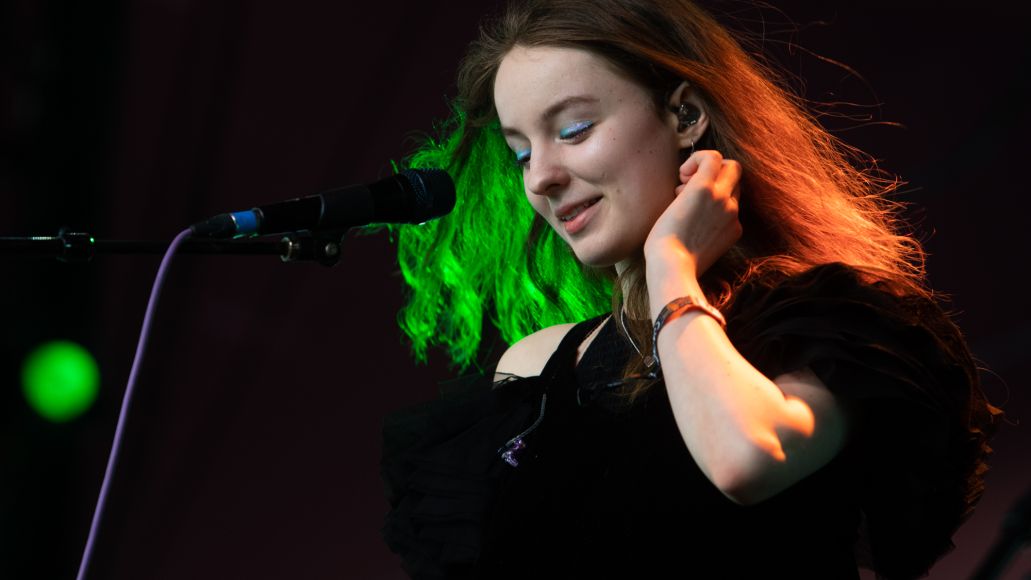 Things turned emotional in the Gobi tent with UK indie pop duo Let’s Eat Grandma. A week ago, it was announced that the duo were canceling their remaining US tour dates, due to the death of band member Jenny Hollingworth’s boyfriend, but that they would keep Coachella on their schedule “as a tribute to Billy and his memory.” As such, both Hollingworth and bandmate Rosa Walton ended their set by covering one of his own original songs in a tearful performance. It was raw, it was depressing, it was everything you read about love in plain sight.

New Pop-Star On the Block 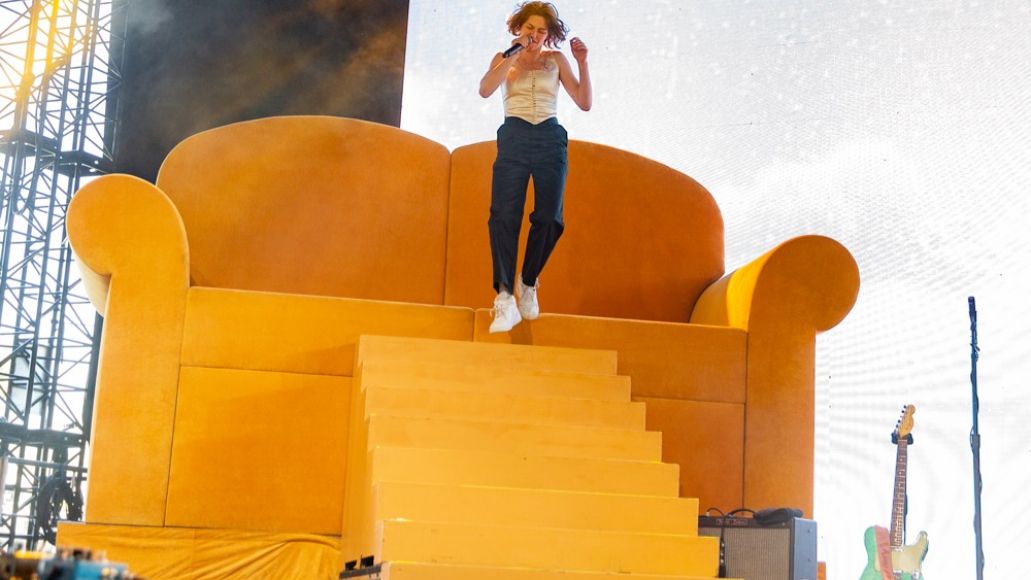 King Princess beamed into the mid-day crowd like golden hour sunlight on exposed brick. Standing on a massive couch — it must have been five times its normal size — the 20-year-old pop prodigy belted out the lyrics to their soon-to-be classics “1950”, “Pussy Is God” and “Talia”. With a glint in their eyes, King Princess looked out into the crowd as if they were truly blessed. Maybe they were. 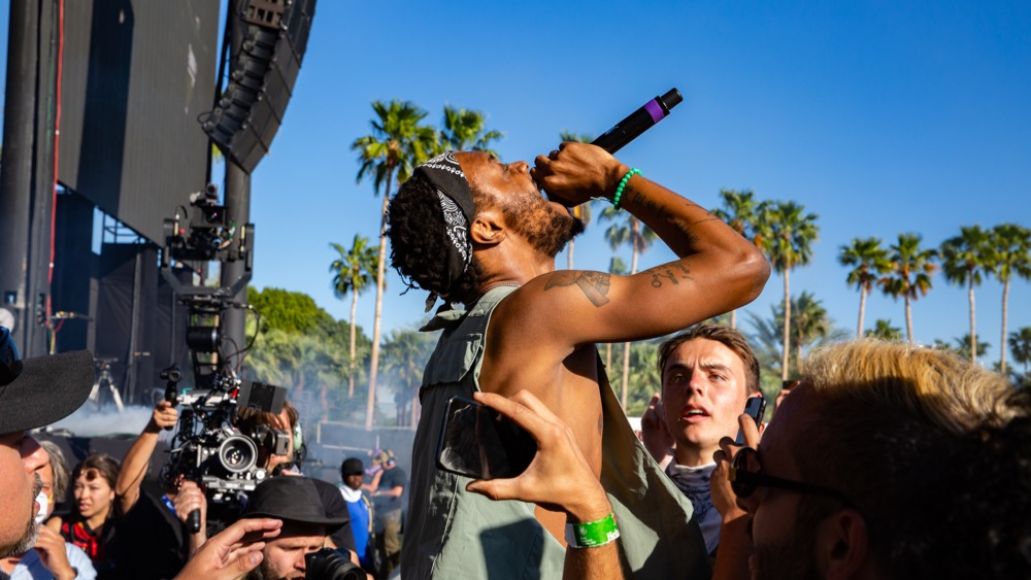 JPEGMAFIA’s abrasive production and vehement lyrics proved to be strange for the Baltimore MC’s stage and slot. Performing on the Outdoor Theatre at four in the afternoon is no easy task, and Peggy certainly incited the crowd with lyrics like “When Donald Trump dies, we’re all gonna party,” but one couldn’t help but think this would’ve been a home run set had it been placed in a tent after dusk.

For more coverage, see our reports for Saturday and Sunday.