Given the festival’s pop-dominating climate, the two go together like the Sahara tent and designer drugs, but Grande’s appeal went far beyond genre. After all, a well-received Coachella set can not only elevate an artist’s career to another echelon, but it’s also one of the very rare opportunities in pop culture today that can truly warrant a lasting pop cultural moment.

Grande offered a moment — very few will dispute that — but something was missing. Without splitting hairs, it was good enough, and while that’s perfectly fine as unadulterated pop entertainment, “good enough” doesn’t exactly suffice when it comes to Coachella.

Despite a fierce trio of originals (“Raindrop”, “God Is a Woman”, and “Bad Idea”), Grande’s first act hardly garnered the reciprocity she likely expected. (It doesn’t help that many of her fans were mostly watching her through their iPhones.) However, her first guest did the trick — sort of.

“Coachella, I’ve been rehearsing my whole fucking life for this moment,” she announced. “Make some noise for *NSYNC!” Right on cue, the group — sans Justin Timberlake, of course — joined Grande for “Break Up With Your Girlfriend, I’m Bored” before blazing through “Tearin’ Up My Heart”. There were screams, there were singalongs, but, for some, there was confusion.

“Oh my god! You don’t know who *NSYNC is, do you,” a nearby fan asked her friend, pestering her with ‘90s-baby superiority. To be fair, it was hard not to sympathize with her friend. Sure, the spectacle of seeing fourth-fifths of *NSYNC was undeniable, but what purpose did the boyband really have at an Ariana Grande show, especially the most pivotal of her career?

(Adding insult to injury, the boy band’s recital of “Tearin’ Up My Heart” wasn’t exactly razor sharp, either, even feeling chintzy at times.) 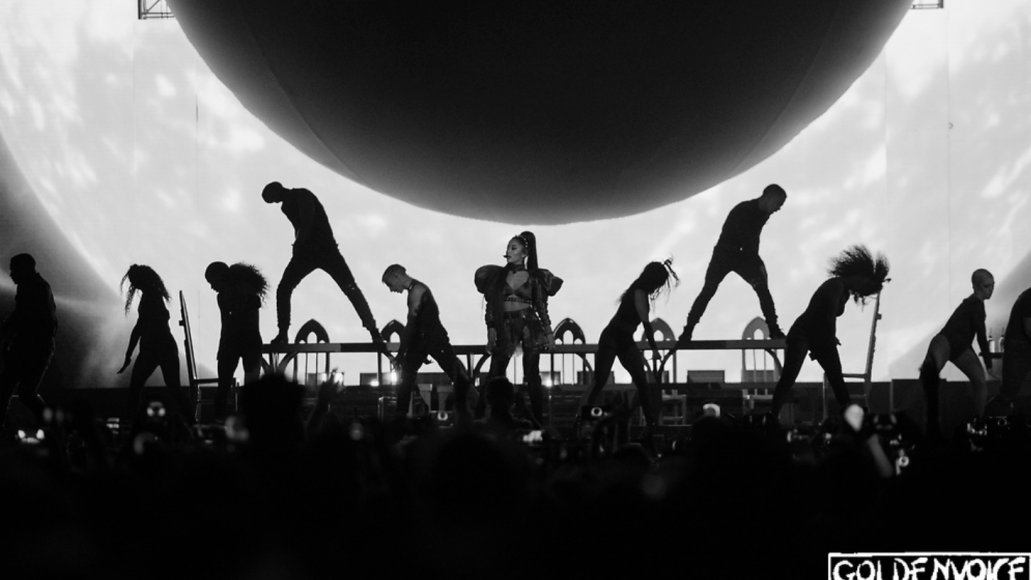 Of course, the early-aughts favorites weren’t the only names on Grande’s guest list. Nicki Minaj came out for “Side to Side” and “Bang Bang” to myriad sound issues, while Diddy stepped in to cover the Notorious B.I.G. classic “Mo Money Mo Problems”. In addition to commemorating past fallen legends such as Biggie, Tupac, and Mac Millar, Diddy also nodded to Grande’s own personal strife. “Give it up for my sister,” he added. “She’s been through a whole lot. She’s still standing.”

From there, the rest of the set was just as agreeable in every regard. The stage production was dynamic, the outfit changes were exciting, and Grande sounded stellar. Actually, if anything, it was those vocals that proved to be the most revelatory facet of the performance. Switching effortlessly between the soft lulls of her mid-range to her trademark squeal, Grande felt like a vocal beacon that could be heard from Las Vegas, piercing her way through hundreds of miles of desert.

In that respect, Grande’s set was a rousing personal success for the singer. After all she’s been through, from headlines of heartbreak to the devastating events in Manchester, one could not help but root for her in the moment. The fact of the matter, though, is that the set wasn’t a triumph. It was just good, which is hardly the worst thing that’s happened at Coachella. Or to her.

Sunday Deposit in the Big Bank 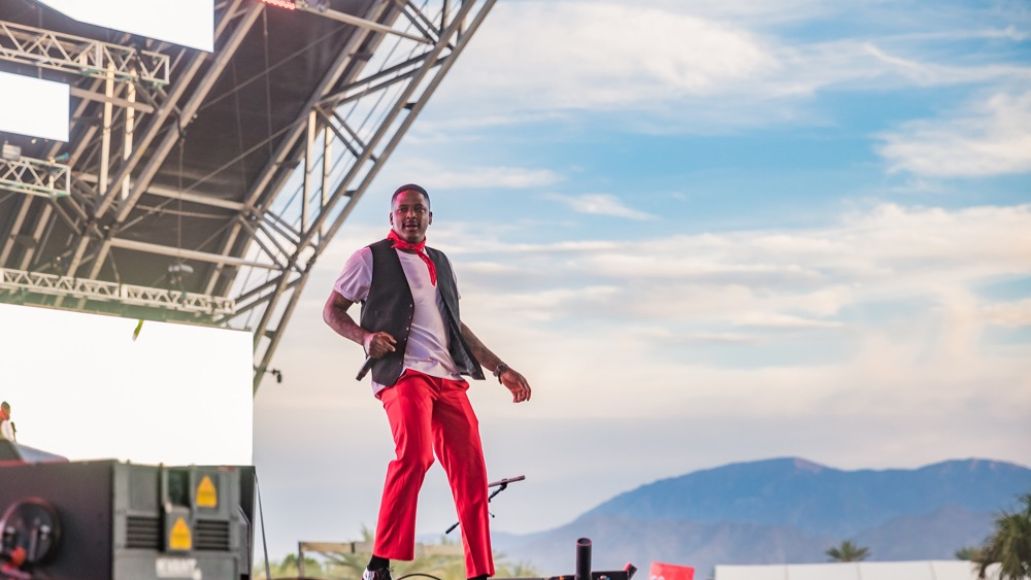 There’s a case to be made, depending on who you ask, that YG’s set at Coachella on Sunday evening might have been the most thrilling performance the entire weekend had to offer. It was certainly the most exciting on Sunday, and by far the best rap performance of the entire weekend. As the sun set and the sky melted into off pink and purplish hues, YG busted into his now-iconic “BPT” with a vengeance and sense of triumph that was honestly terrifying. “Boachella!” he screamed, nodding to his Blood ties with a red bandana and letting out his intimidating persona in full-force.

As the bass of the Sahara Tent lends itself to the deep, thumping sub-basslines of YG’s go-to producer DJ Mustard, the rapper blazeed through renditions of “I Just Wanna Party” and “Twist My Fingaz”. The set dropped all frills, though, when YG performed “Suu Whoop” as an homage to his recently fallen friend and collaborator, Nipsey Hussle. “This shit look like motherfuckin’ heaven” he yelled before going on to tell the crowd that, since Nipsey’s passing, he’s barely been able to get out of bed and that the only reason he’s able to get through the Sunday performance is through the help of tequila. It was a vulnerability moment that brought even more energy to the already invested crowd. 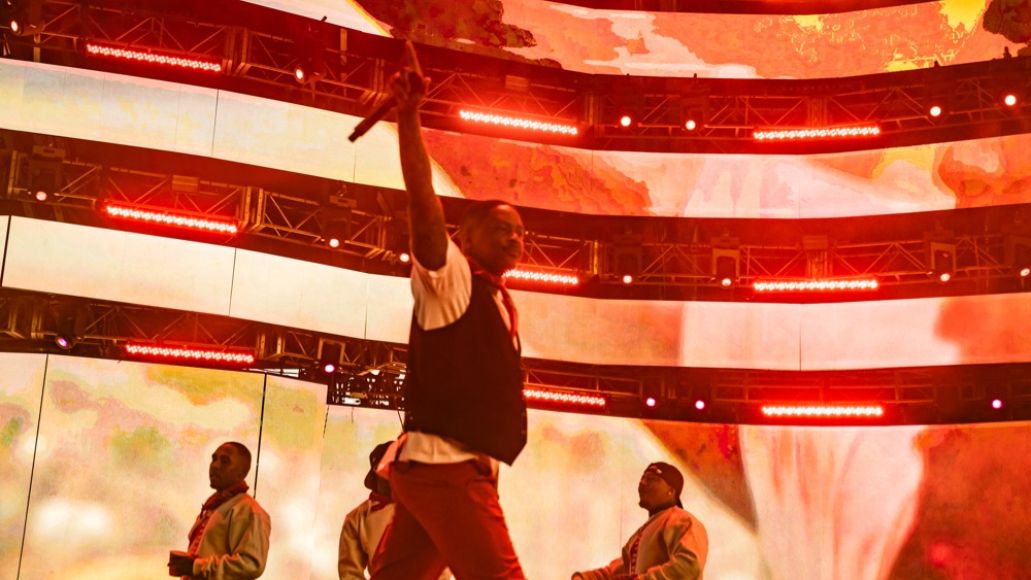 After a moment of silence to commemorate Nipsey— his passing would be a common theme throughout the entirety of YG’s set — the rapper broke into his toolbox of SoCal hits including “Bulletproof”, “Handgun”, and “My Nigga”. Then came “Stop Snitching”, the live debut of a track from his forthcoming album. By then, the crowd was belting along to every single lyric and jumping up and down in a frenzied swarm. Just when you thought it couldn’t turn up any higher, a precarious presence took the stage. “We’re gonna’ build the wall” said a Donald Trump impersonator with a snarky jolt in his voice. “We’re building a beautiful wall everybody, who wants to do it?” The boos grew more intense until YG tore into the biting bars of “FDT (Fuck Donald Trump)”. The tent’s screens flashed images of Trump, standing arm-in-arm with Klansmen as a giant red screen displayed the text “FUCK DONALD TRUMP”.

After dissing Trump in full force, YG moved through a plethora of hit tracks that never slowed in momentum. The rapper broke into 2010’s “Toot It and Boot It”, satiating his day-one fans’ desire for a classic, before moving into “You Broke” and “Bitches Ain’t Shit”, where Tyga joined him onstage, before performing his own bopping ballad “Taste”. Then came the covers. Cardi B’s “She Bad” was followed by Lil Jon’s “Get Low” and Jeremih’s “Don’t Tell ‘Em”. By the time YG broke into “Left, Right”, the entire crowd was losing it over the enormity of the performance. Is it possible for a single artist to move through this many hits in one set? 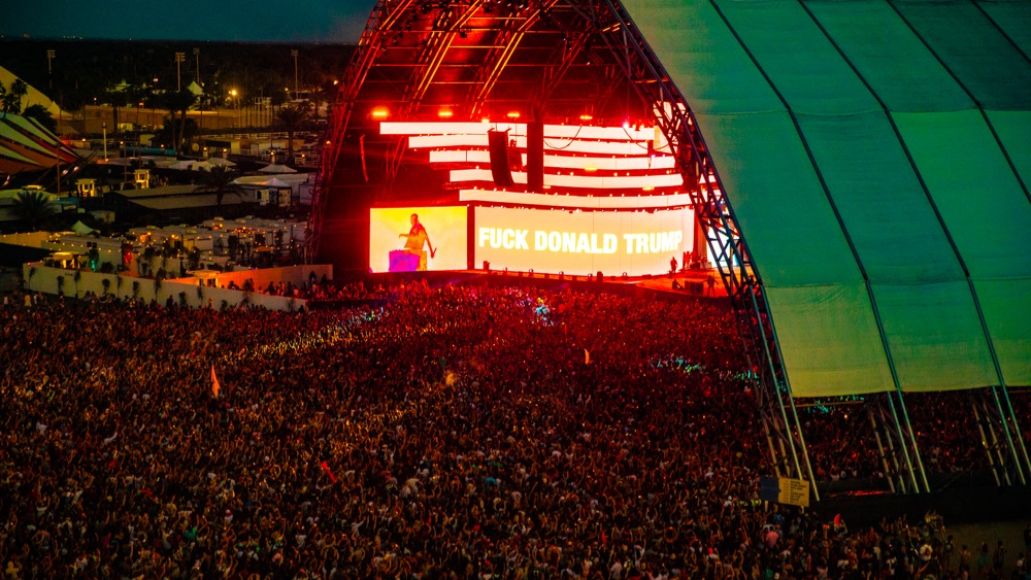 After leaving in triumph, the Compton rapper kicked off his encore with the viral hit “Thotiana (Remix)” and “Big Bank”, where 2 Chainz and Big Sean joined him nonchalantly onstage, busting straight into their verses. YG then paid homage to his Compton roots and honored the legacy of one of SoCal’s finest with a tribute to Nipsey Hussle in such a touching manner.

Overall, YG’s appearance was the most triumphant hip-hop showing since Kendrick Lamar graced the main stage in 2017.

Filled to the Brim 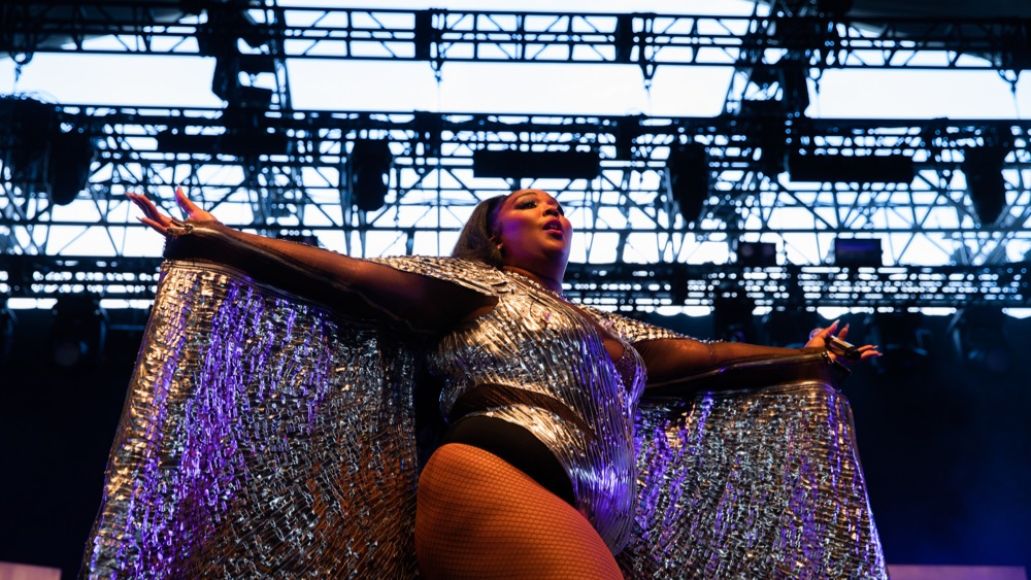 Lizzo has quickly cemented herself as one of 2019’s preeminent pop figures, so it makes sense that when her Sunday afternoon set encountered troublesome sound issues as she broke into her live debut of “Cuz I Love You”, she responded by boldly remarking: “I need you to get this technical shit together because next time, when I’m headlining, I’ma need my ears to work.” The statement set the tone for the vivacity of Lizzo’s twerk-heavy dance spectacle. She immediately breezed through the immaculate grandeur of “Worship”, paying homage to the queen of soul by including elements of “Respect”.

Lizzo’s set only spanned 12 songs, but every track got the crowd grooving more than the last. The show attracted the most tightly packed audience in the Mojave tent across the whole weekend. Moving through a dynamic trio of closing tracks in “Good as Hell”, “Tempo” — her collaboration with Missy Elliot — and “Juice”, Lizzo’s energy went unmatched, and, like she proclaimed at the beginning of her set, it’s likely that she will be headlining festivals in the years to come — especially if she keeps up her tempo.

Non-Stop Flight From Cali to Daytona 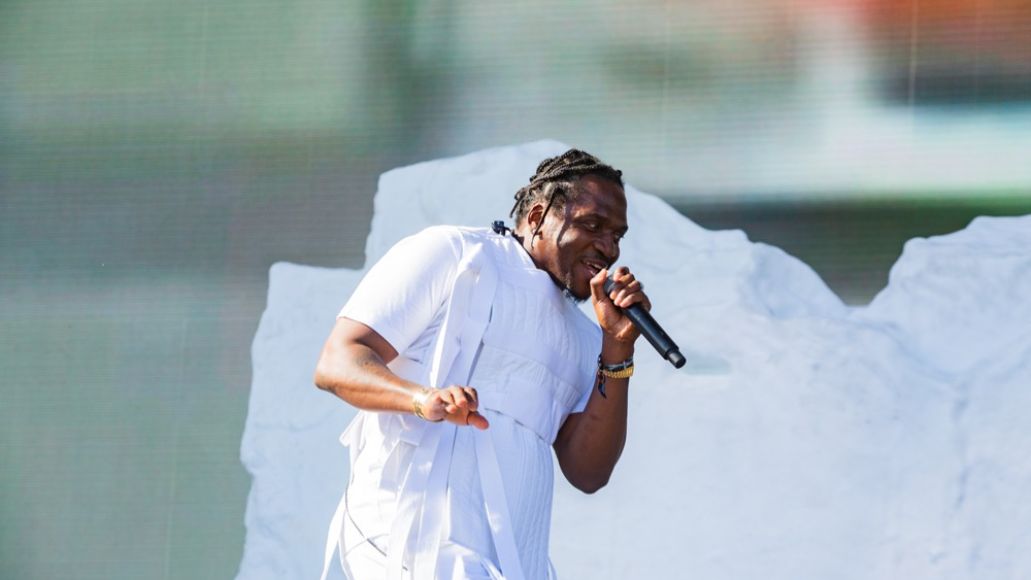 Kanye West may not have appeared at this year’s Coachella, but his main associate Pusha T played a no-frills set in the midday heat that left everyone mesmerized. The Good Music overlord played a string of originals: opening track “If You Know You Know” set the tone for the rigorous set, and it only continued to build momentum as Pusha bolted into tracks from 2018’s critically acclaimed DAYTONA. In fact, Pusha T played every single song from the West-produced hit album. All seven of them.

Numerous Kanye West covers made their way into the set  (“Mercy”, “Runaway”, “So Apalled”), as well as Future’s “Move That Dope” and Chief Keef’s “I Don’t Like”, but Pusha T’s 19-song setlist never had a moment of dullness within it. His inclusion of every single song from DAYTONA — coupled with the fact that he got on the mic and proclaimed the project album of the year — marked a high point in the 41-year-old rapper’s career. Pusha T is king, and he sure as hell knew it in the desert. 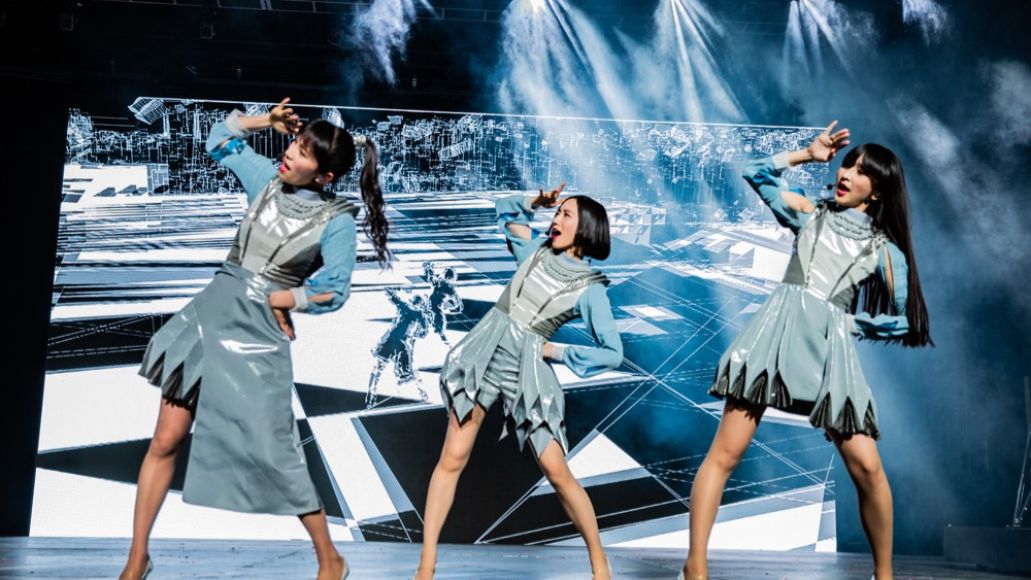 At Coachella, no genre is a bad fit for the festival. Paul Tollett, the festival’s founder and booker, sent a clear message this year that anything is possible by embracing Latin acts, A-list pop performers, K-pop superstars, electronic obscurities, and other sounds unfamiliar to the American festival circuit. One of those inspired inclusions was the chaotic J-pop outfit Perfume, who became the first J-pop group to play in the festival’s 20-year history.

Like BLACKPINK or J Balvin earlier in the weekend, Perfume also found its audience. Curious onlookers found themselves pulled into a series of escalating spectacles, where EDM met Japanese culture: happy hardcore joining big-room house and other sects of mainstream EDM. Dynamic and divergent, Perfume’s set was a welcome and intriguing showing, and further evidence that Coachella will continue to take daring risks in the future. 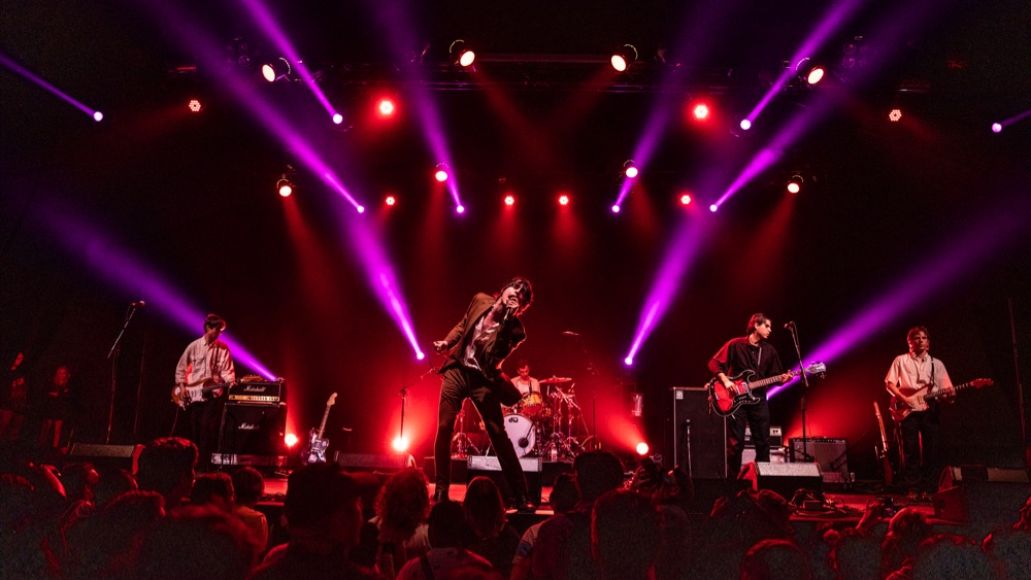 Danish punk outfit Iceage played to a minuscule crowd during their mid-day Sonora set … as in, the crowd might have reached 200 people tops. Nevertheless, lead singer Elias Bender Rønnenfelt crooned his way through a dynamic set full of brooding post-punk ballads, all of which oozed with raw, melancholic emotion. Off to the side, singer and fellow collaborator Sky Ferreira could be seen watching the set, perhaps also reveling in the intimacy of the marginalized performance.

For more coverage, see our reports for Friday and Saturday.

Ariana Grande Walks Through Her Influences at Coachella 2019