As Tame Impala took the stage for their Coachella performance on Saturday night, a sense of giddy anticipation filled the air. The Australian psych-pop outfit have become universally lauded for their expansive live visual setup, and their set would be the fourth time they’ve played Coachella in a decade, moving up from the festivals tiny fonts to sub-headlining for ACDC in 2015 to their imminent graduation to headliner last night.

Seeing how Parker is something of a perfectionist (okay, he is a perfectionist), it wasn’t the least bit surprising that everything about the performance was flawlessly executed. The visuals! The donut-shaped rig that pulsated with energy! Parker’s lush vocals! The entire supporting cast! It was all laser sharp, no pun intended. However, what was surprising was how little new music they actually brought to the table. 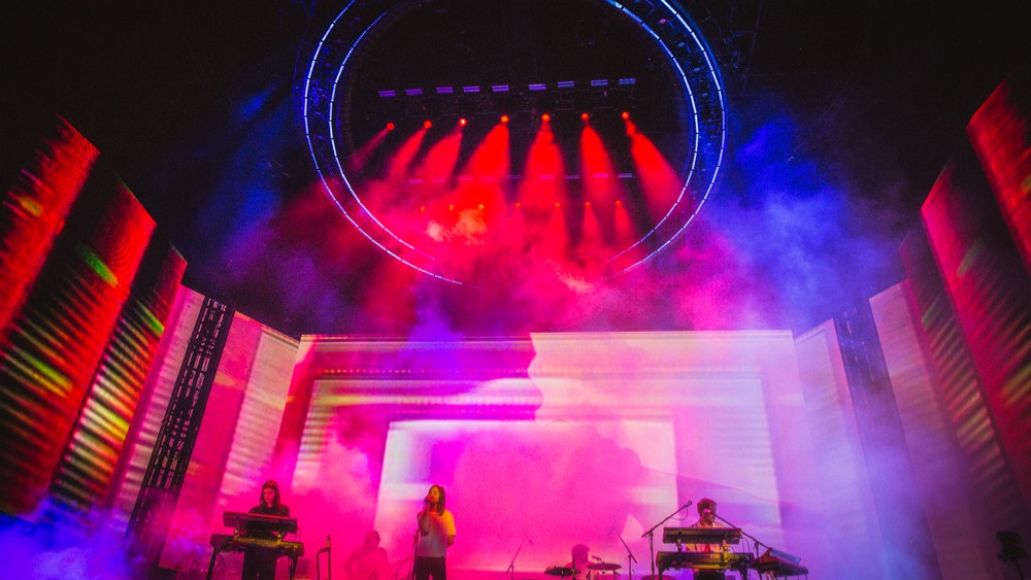 Otherwise, the set itself was filled with all of the same material that’s flooded their sets in the years since 2015’s Currents. So, it was a tad disappointing that there wasn’t much of an edge in that regard. Though, to their credit, they more or less became the de facto Saturday night headliner when two of Coachella’s initial big guns dropped out last minute back in December, leaving the festival with their hands tied.

In that respect, Tame Impala did more than enough to fill that void by drenching the crowd with their LSD-drenched visuals and even a little more crowd work than usual. (During one of their final songs, Parker crept onto the festival’s projectors with five eyeballs.) Even so, one can’t help but feel that the festival jumped the gun on this band’s graduation, leaving us more starved than satiated.

That’s good news for Tame, though. 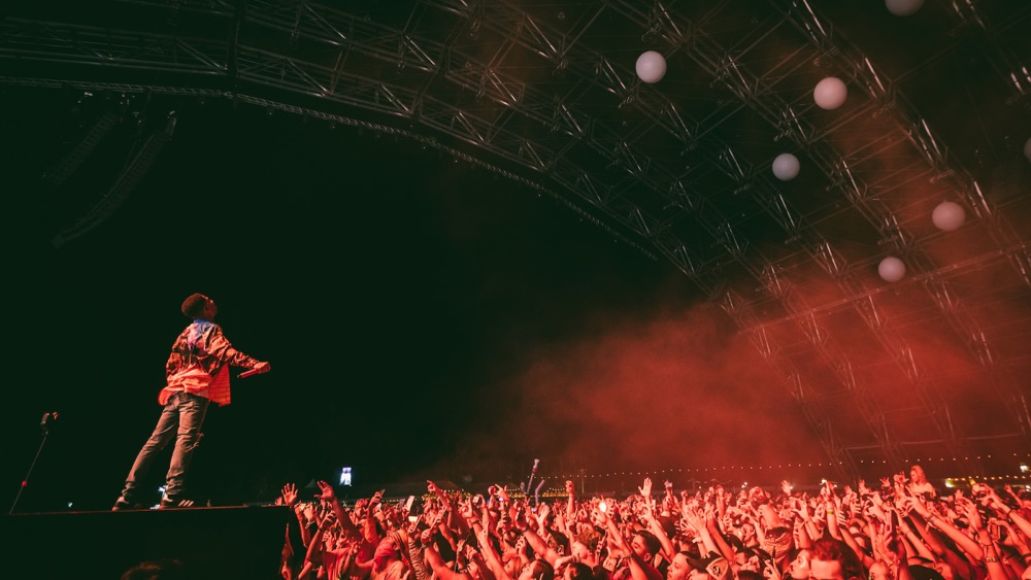 The bar was set high for Kid Cudi’s showing in the Sahara tent on Saturday night. After Solange pulled out of the festival a mere week before gates opened, Tame Impala shifted up to an earlier slot, meaning Kid Cudi and Bassnectar were afforded the unique opportunity to split a late-night festival audience after the headliner.

What could have been a dynamic showing was stifled by Cudi’s lack of momentum from the jump. Although a rendition of “Father Stretch My Hands” and a triumphant performance of “Reborn” proved to be high points of the set, Cudi felt scattered throughout most his set, never fully able to keep the crowd’s attention for more than a passing moment. 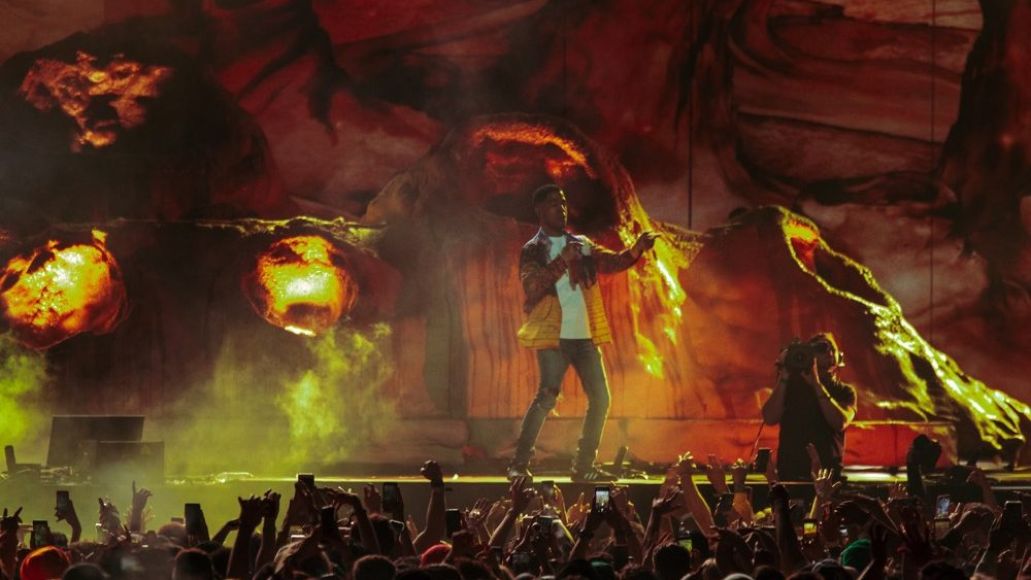 The noticeable omission of “Soundtrack 2 My Life” felt like a missed opportunity to carry his fans into the proper headspace for his performance and “In My Dreams”, the iconic intro anthem from Man on the Moon, would have served him well as an intro-de-grandeur. Neither were utilized. Instead, Cudi opted to focus his lens on Kids See Ghosts tracks and EDM remixes of his most popular songs.

The whole thing felt cheap, careless even. Granted, there were redeeming aspects, like the saccharine visuals projected onto the Sahara tent’s massive projectors, and the sheer universal appeal of Cudi’s singalong tracks, but, ultimately, the set fell short. Cudi felt the need to pander to his audience, giving them what he thought they were expecting, rather than the unapologetic showing they so desperately needed.

You Better Believe the Hype 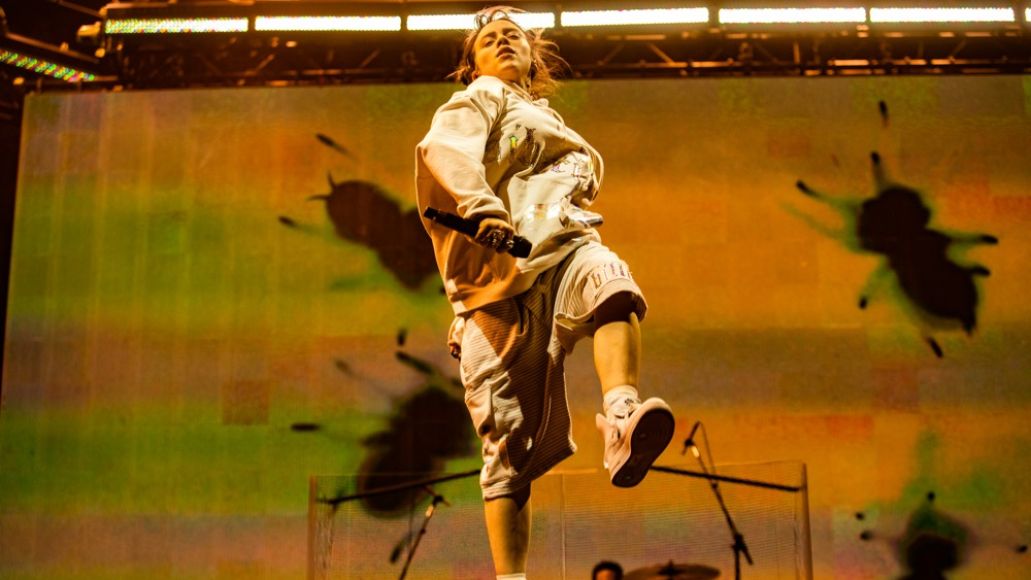 At 17 years of age, Billie Eilish is one of the youngest artists to occupy such a prime stage and slot at Coachella, but it was earned. The late-night Outdoor Theatre crowd sprawled as far as the eye could see as Eilish busted down frantically to the live debut of “Bad Guy”. Moving into another debut with “Strange Addiction”, her energy was quickly matched by the gyrations of thousands of frenzied onlookers.

As she flailed onstage, Eilish cast a wicked spell over California’s youth, lulling them into her spooky sonic universe. Tarantulas and roaches appeared on big screens, Eilish laid in a floating bed Exorcist style, and a flock of dancers writhed around in beds as if they were trapped in a schizophrenic episode. It was Rob Zombie horror dynamics with bubblegum pop affectations … and everyone was chewing it.

At such a young age, it’s daunting to think about where Billie Eilish might go from here. 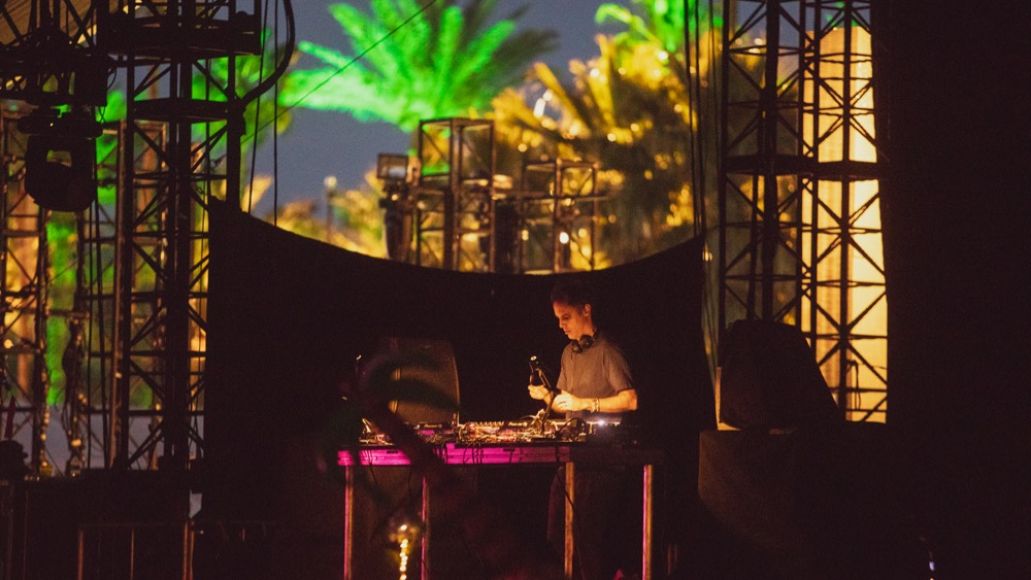 Four Tet used not a single ounce of lighting for his hour-long dance music expose in the Mojave tent. The IDM pioneer crafted a steady and specific energy, never faltering from his commitment to specificity. Turntablism gave way to jacking dance moves, heart throbbing synths washed over a vulnerable crowd, and altered renditions of his stellar originals culminated in cathartic release.

Shortly after, Aphex Twin swooped right in with a set defined by its binary division of chaos and fluidity. Richard D. James ebbed and flowed between jarring, almost epileptic, image patterns that juxtaposed against periods of focused, luminescent zeal. It was unnerving as often as it was awe inspiring, while also proving to be a crash course in dance music as Berlin techno relented to infectious jungle grooves, which gave way to breaks of acid house, and on to industrial, and synth, and the genres kept churning.

TL; DR? Until the Chemical Brothers are booked back-to-back with Boards of Canada, Coachella likely won’t see a duo as unique as this in quite some time. 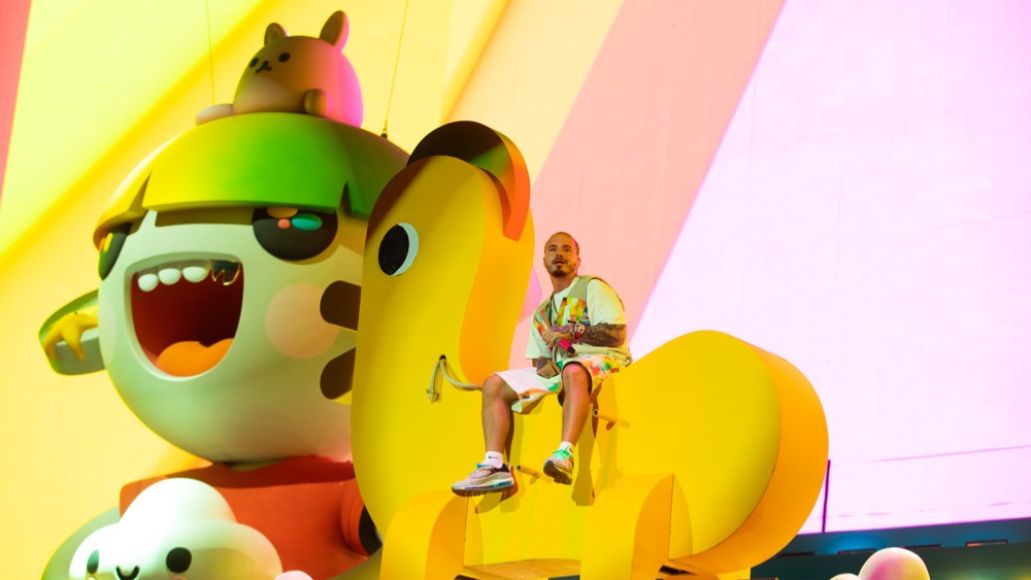 The most noticeable aspect of Coachella’s lineup this year was its sudden embrace of various world genres. Some of Latin music’s biggest names sat next to mainstays in K-Pop and American pop. That notion wasn’t lost on J Balvin. “It took us 15 years to get here,” proclaimed the Medellín hailing Reggaeton superstar, matter of factly, after being joined by Rosalia for an incendiary rendition of their collaboration, “Con Altura”.

As such, the set was a triumphant introduction of Latin music into Coachella’s wide-reaching festival platform, and Balvin’s stage banter was almost exclusively versed in Spanish. Very little was lost in translation, thanks to the help of art collective FriendsWithYou, whose stage setup was an anime-like overflow of jovial sensory triggers: ballooning cartoon characters, a horse-sized duck that Balvin rode across the stage, and a slew of background dancers all decked the set out with pop culture ambition.

It was a total joy. 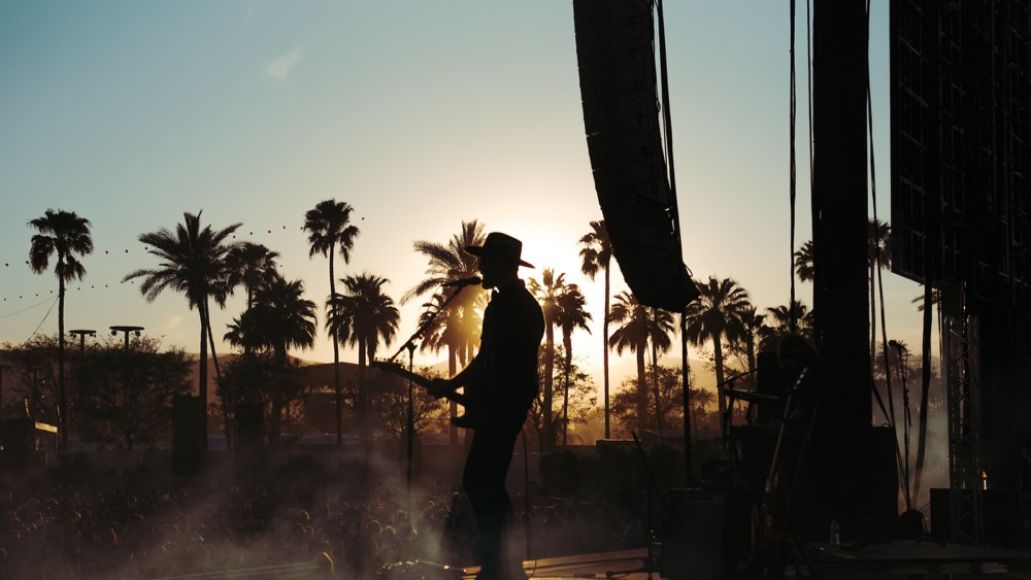 Canadian electronic duo Bob Moses performed their slow, prodding grooves during the coveted golden hour slot. The set, mainly filled with the methodical builds of their originals, took a rather chaotic turn, however, when the group busted into The Prodigy’s seminal track “Breathe”. The rendition was an unexpected, albeit totally welcome, homage to the iconic electronic outfit’s late frontman Keith Flint, who passed away in his Essex home this past March. 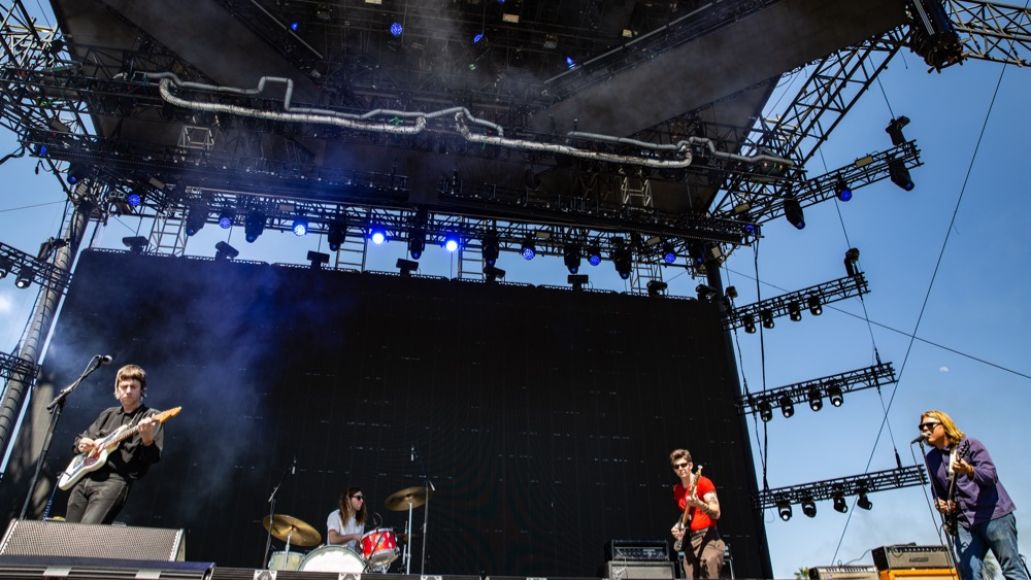 As hungover festival goers roamed on the scalding hot grass of the Outdoor Theatre, Ty Segall and White Fence thrashed through a set of aggressive punk ballads with a sense of humor and wit about them. “Alright, we should be warmed up now”, joked Tim Presley nearly 20 minutes into their set. Despite the punishing midday heat beating down from above, jocks and punks alike coalesced to form a mosh pit at the front of the band’s sparse crowd. It was a rare sight to see at Coachella this year, but it was proof that there’s always still room for a bit thrash.

For more coverage, see our reports for Friday and Sunday.