Last year, a Teen Vogue piece about Coachella went wildly viral — not for reasons related to the lineup, the art installations, or the food, but rather because of the widespread sexual harassment that many people experienced at the festival. Reported over the course of the first weekend, writer Vera Papisova described how 54 women she interviewed had faced some form of sexual assault or harassment since arriving at Coachella. Papisova herself was groped 22 times during the 10 hours she spent inside festival grounds working on the story.

This type of sexual violence is not limited to Coachella; a survey conducted by OurMusicMyBody, a campaign focused on exposing these issues within the music scene, found that 92% of female respondents had experienced some form of sexual misconduct while at a festival. While Lollapalooza, Bonnaroo, and Lightning in a Bottle had all made some attempt to address the problem, Papisova called out Coachella for a complete lack of dialogue around the issue in any of the materials provided to their attendees.

As the highest-grossing festival in the world, Coachella has the resources to take action and the responsibility to lead by example. And festival leadership heard Papisova’s point, loud and clear. That’s partially why this year, Coachella announced it would be implementing a new initiative called every one (stylized in all-lowercase) to “co-create” an environment that is “safe, inclusive and fun for all.” 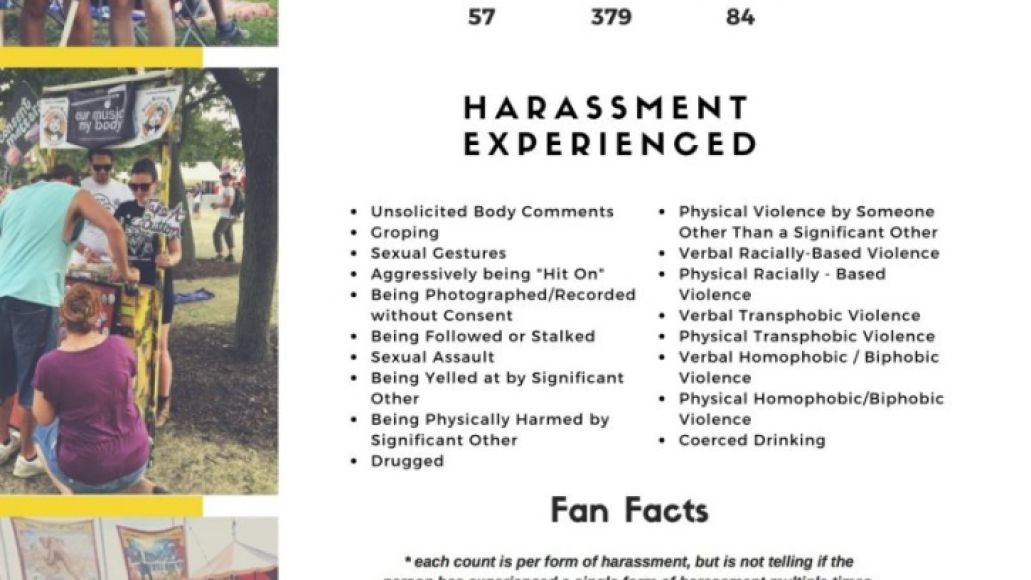 Stats provided by Our Music My Body

Goldenvoice, the company that operates Coachella, sought out Veline Mojarro to lead the program. In 2018, Mojarro co-founded a woman-of-color-led consulting agency called Shift that provides sexual harassment prevention and diversity and inclusion training for workspaces. Her expertise played a crucial role in developing the strategy and implementation plan for every one, which she says became of urgent concern to Coachella after Papisova’s piece published.

“We brought in woman., a fierce consulting group that does safety work in the nightlife scene, to help curate the every one tent and Ambassador program,” Mojarro told Consequence of Sound. “We also sought guidance from OurMusicMyBody, Planned Parenthood, Coachella Valley Sexual Assault Services, and Trans Community Project. every one has been a community lift.”

As the two-weekend festival kicks off with sets from Janelle Monáe, Tame Impala, and Bad Bunny, attendees can expect to find every one tents both in the venue and camping grounds. There will also be Ambassadors providing assistance throughout the festival, all of whom received prior training from Mojarro, Dr. Paula Helu-Brown, and Eleuthera Lisch with a focus on “a person-centered care approach, gender inclusivity, trauma-informed care, and safety protocol.”

In addition to the hands-on outreach offered throughout the festival, Mojarro hopes that seeing the presence of every one around Coachella will encourage anyone who attends to take a look at the root of the issue.

“Prevention starts with confronting how we uphold and support the systems, culture, and narratives that have allowed sexual harassment to happen,” she says. “We have all been impacted by these systems, and it’s everyone’s responsibility to do the work and challenge others to do so as well. And I’m talking about slut shaming, victim blaming, antiquated gender expectations — all the things that uphold violence.” 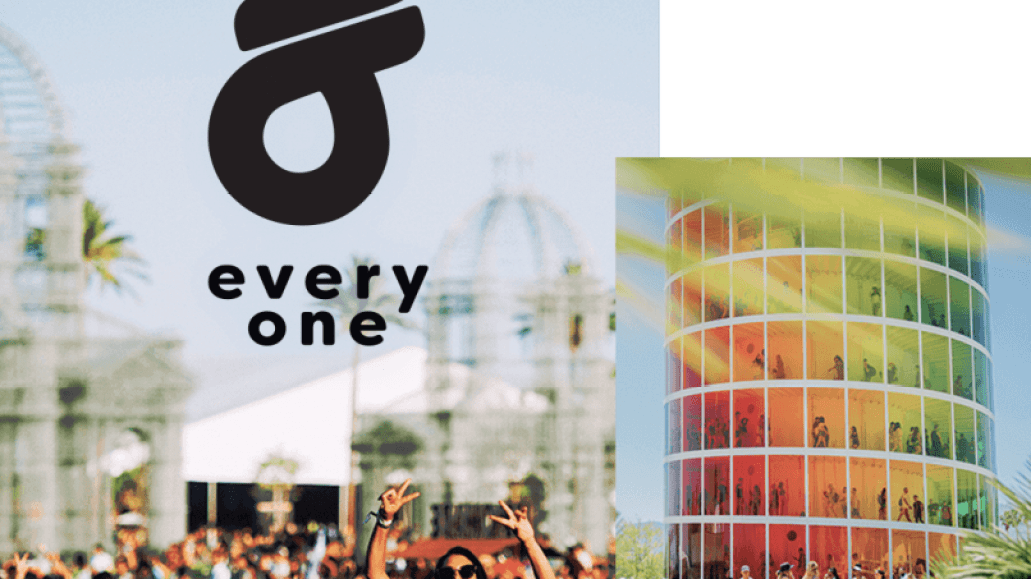 every one at Coachella

For activist Ashley Driscoll, the steps Coachella is taking resonate with a much-needed dialogue within live music spaces. After facing constant unwanted touching at shows, Driscoll founded a group called GrooveSafe in 2017 that aims to “redefine consent culture” and raise awareness about body safety for all genders across all genres of concerts.

Although assault and harassment are commonplace across a number of public and private spaces, Driscoll believes there are specific ways that concerts can make it easier for these circumstances to materialize. Large crowds, darkened venues, drugs, and alcohol all contribute to the ways these exchanges can become normalized. Even though none of these behaviors excuse violating another person’s safety, they can often be used to perpetuate the idea that these transgressions are the status quo at shows.

Similar to what every one is doing at Coachella, GrooveSafe works with a variety of venues, bands, and festivals like Summer Camp and Sweetwater 420 across the US to break down these misconceptions and stand up for the right of all concertgoers to enjoy themselves without worrying that someone will put them in a dangerous or uncomfortable situation. At festivals specifically, where fashion plays a big role, Driscoll says that programs like the one she runs and the one established by every one have a big opportunity to break down slut-shaming myths that blame survivors for provoking perpetrators.

“Self-expression is not an invitation, and I think that’s something really important for people to realize when they’re relearning consent,” she says. “People can wear whatever they want; no matter what, you need consent to touch them.”

At shows where there aren’t ambassadors walking around or booths with easy access to trained professionals, Driscoll encourages concertgoers to educate themselves on the ways they can be active bystanders, both for their own sake and that of the people around them. She’s currently working on developing an online training program with the necessary information.

If someone witnesses inappropriate behavior, she suggests that they try to diffuse or disrupt the situation by directly approaching the people involved. In cases where direct confrontation might result in a violent or risky reaction, even acting like the person being harassed is a close friend and gently removing them from that immediate space can make all the difference.

This kind of solidarity with fellow festivalgoers — which Papisova noted was gravely missing in many instances she experienced at last year’s Coachella — is an essential piece of the puzzle. This year, every one’s website features an outlined “your part” guide, which reinforces accountability, mindfulness, and respect. 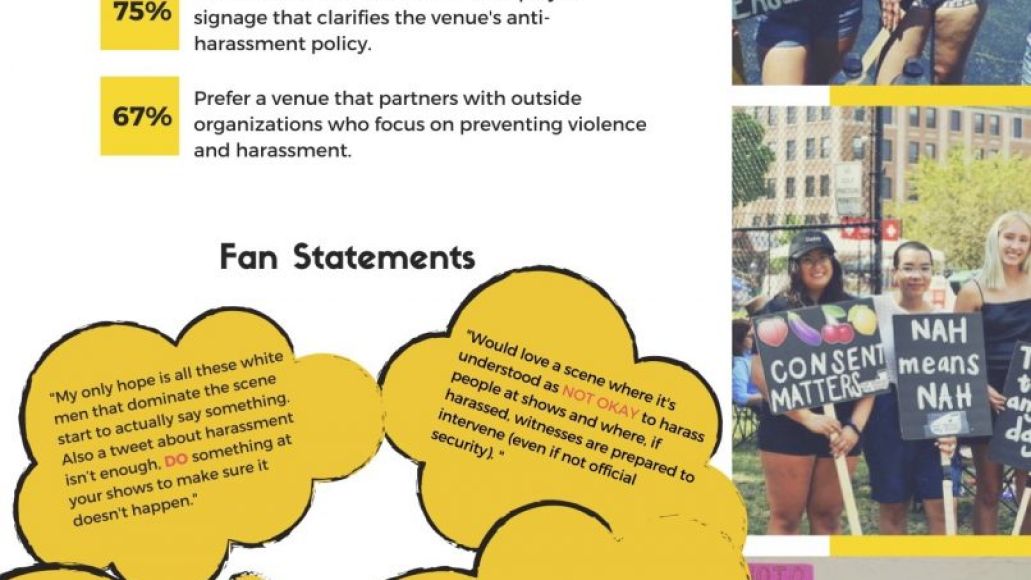 Stats provided by Our Music My Body

“Preventing sexual harassment is a deeper conversation that goes beyond music festivals. Complacency is not an option. We need each other, and we need to do better,” says Mojarro. “There is so much beauty and joy in a music festival. Thousands of people from all over the world coming together in one place to experience their favorite music alongside their favorite people — everyone deserves the right to feel safe.”

And because sexual harassment doesn’t stop at the festival gates, she hopes that every one’s efforts will continue to challenge the notion that consent is a simple yes or no question. Instead, like Driscoll, she highlights the importance of redefining consent as an ongoing process that requires attention and consideration.

“Consent is fun, playful, sexy, and exciting. It does not shame, guilt, embarrass, coerce, trick, or manipulate. Consent should live in our daily lives; it should happen before, during, and after. It should go both ways, it should be actively asking for what you want, and actively asking for permission. Consent is dope, and it’s time we all get with it,” Mojarro concludes. “We hope what folks learn through the every one initiative about active consent, safety, and community responsibility is something they carry beyond the festival and into the rest of their lives — at work, at home, with friends, everywhere.”

*If you or someone you know has faced sexual assault or harassment, you can seek support through the National Sexual Assault Hotline by calling 800-656-HOPE (4673)