Ariana Grande closed out her weekend two Coachella set with assistance from a surprise guest in Justin Bieber. The two did “Sorry” together, and Bieber even revealed that a new album would be “coming soon.” Despite double the star power on stage, Bieber’s cameo was a bit overshadowed by a lackluster performance and what appeared to be some lip-syncing.

At the time, Bieber explained to the crowd that he hadn’t “been on stage in two years — I came out here, I had no idea I was going to be on stage tonight.” The backlash regarding his lip-syncing hasn’t relented that much, though, and today Bieber has responded to his critics via a series of lengthy tweets. Grande also chimed in in his defense.

(Read: The 20 Essential Acts to Catch on Tour This Spring and Summer)

Bieber’s most vocal detractor as of late has been TV host Morgan Stewart, who critiqued his Coachella performance on a recent episode of E! Daily Pop. Bieber called Stewart out directly on Twitter, likening her comments to bullying:

“Just saw a video of you ripping me to shreds saying I was lip-syncing. They played the song and i just sang overtop of it.. regardless why spend your time tearing people down. It’s People like you that are bullies at school that are making kids suicidal.”

He added, “What hurts about this is the fact that you have a platform to make a difference. And rather than being positive you belittle people.”

Grande must’ve seen Bieber’s stream of tweets as she decided to jump in and stand up for him. The thank u, next singer confirmed Bieber’s previous statement regarding the impromptu nature of his Coachella cameo, writing:

“we also decided to do this ten minutes before my set started. we had 0 soundcheck, 0 rehearsal. u were singing with the back tracking like most cameos do. people are bored. people don’t know how it feels to be under such scrutiny.”

Grande closed her commentary by saying she “don’t like when people try to ruin beautiful moments for my friends that’s all. have a good day.” In addition to Bieber being a fellow friend and colleague, Grande has been very outspoken lately about the importance of mental health and practicing kindness — especially on all-too-frequently unkind platforms like social media and the internet. She even recently bonded with actor Jim Carrey over the topic.

Find all of Bieber’s tweets below, followed by Grande’s since-deleted tweets (preserved by Billboard).

@Morgan_Stewart just saw a video of you ripping me to shreds saying I was lip-syncing. They played the song and i just sang overtop of it.. regardless why spend your time tearing people down. It’s People like you that are bullies at school that are making kids suicidal.

@Morgan_Stewart imagine if you spent even half the time you spend laughing at other peoples expense actually building people up and encouraging people how much positivity you could bring. What hurts about this is the fact that you have a platform to make a difference

And rather than being positive you belittle people. Think about how awesome it felt for me to be on that stage after being away for so long the excitement and joy it gave me doing the thing i love the most, i sang to to backtrack like most cameos do this is a normal thing,

And rather than try and make people feel accepted and loved you find things to pick apart like the world isn’t full of that already.. we can find something negative to say about anything or anyone

When are we gonna be the kind of people that find joy in adding value to one another and not tearing each other apart.. 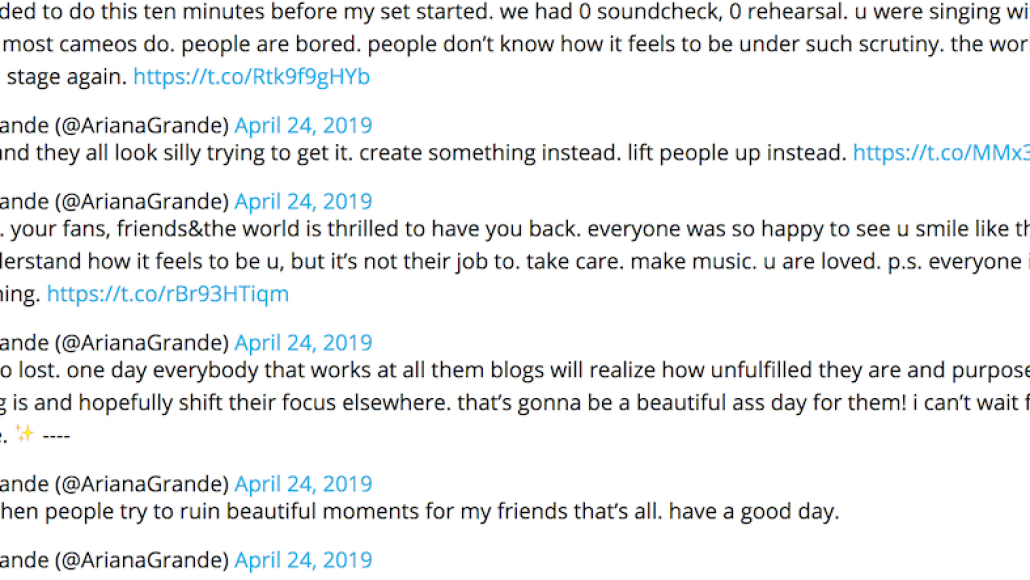 Ariana Grande brought out Justin Bieber and then he announced a new album on the way pic.twitter.com/xn8KyUO2Jv

Bieber has supposedly been on a “lengthy hiatus” from music, yet has been especially vocal on social media the last few weeks. Responding to a Consequence of Sound article, Bieber called for the firing of Fox’s Laura Ingraham, who used her show to mock the late Nipsey Hussle.