Setting the Stage: It’s pretty much universally agreed that one of the greatest rock guitarists — if not the greatest rock guitarist — of all-time was the legendary Jimi Hendrix. Looking back on the history of rock guitar, few players truly took the instrument to the next level as boldly and quickly as Jimi did during the late ‘60s, when he introduced the use of feedback, wild solos, and flamboyant showmanship to the world of hard rock, on the strength of such classic tunes as “Purple Haze”, “Fire”, “Foxy Lady”, “Voodoo Child”, and “Machine Gun”, among others.

And despite Jimi having passed in 1970, demand for his music remains as strong as ever — so much that over the years, “Experience Hendrix” tours have been assembled, featuring a wide variety of musicians paying tribute to this one-of-a-kind musical figure. And this year, the lineup was particularly attractive to headbangers, as several players with true metal ties were included — Dave Mustaine, Joe Satriani, Zakk Wylde (albeit not for the entire tour, so he was not present this night), Dweezil Zappa, and King’s X singer-bassist Doug Pinnick, as well as bassist Billy Cox, who was a member of Jimi’s Gypsy Sun and Rainbows, Band of Gypsys, and the final version of the Jimi Hendrix Experience.

NYCB Theatre in Westbury, Long Island, is one of the more interesting venues to take in a concert, as it is “in the round” — which means the stage is in the middle of the venue, and the audience surrounds it completely — while the stage also slowly revolves, so the crowd gets various viewpoints throughout the evening. As a result, the musicians have to enter and exit through the same aisle as audience members!

Also, taking a gander at the makeup of the audience, it became quickly apparent that there was a wide variety of ages represented — from children to long-haired/white-haired rockers, some of which may have actually been lucky to have seen Jimi onstage back in the day. But it was certainly remarkable to see the youngsters who must have just discovered Jimi’s music, hopefully serving as a promising sign that future generations will continue to discover the classics, and not just settle for whatever trendy musical pabulum is being churned out at the moment.

Taking the Stage: Jimi’s step-sister, Janie Hendrix (also president and CEO of the Experience Hendrix company), first took the stage, explaining what Jimi meant by his famous phrase, “electric church music,” before the night — which was split into two halves, with an intermission in the middle — kicked off with “Freedom,” performed by Cox (who also provided vocals), Zappa, and drummer Chris Layton (Steve Ray Vaughan & Double Trouble), who provided the beat for almost the entire evening. Various musicians and singers would come and go throughout the evening, including Eric Johnson (whose rendition of “Are You Experienced” was a highlight, as you could see how Jimi probably created the “scratching” sound effect in the song… by rubbing the side of his hand across the strings over the pickups), bluesman Taj Mahal, and Indigenous guitarist Mato Nanji, among others.

But the most pleasant surprise of the first half was undoubtedly Jonny Lang, who provided highly inspired lead vocals and guitar work on “All Along the Watchtower”, “The Wind Cries Mary”, “Spanish Castle Magic”, and “Fire”. However, the standout of Lang’s portion was “Spanish Castle Magic”, where he traded off solos with Nanji, and it seemed like he was pouring every ounce of strength into both singing and soloing. If you have never seen Mr. Lang live before, it’s hard to not walk away being extremely impressed by his talents.

But for the heavy metallists in the crowd, Megadeth’s Dave Mustaine joining the gang was a highlight — collaborating with Lang on “Spanish Castle Magic” and “Fire”, and then continuing on as the main guitarist on “Purple Haze” and “Stone Free”. While there’s no denying Mustaine’s immense instrumental and compositional talents (heck, he played a major role in the creation of thrash metal, and has penned countless metal classics), his playing came off a bit technical here — which isn’t meant as a slight at all, as Megadeth’s riffing demands precision. But it’s just that Mustaine’s soloing wasn’t as bluesy as say Lang’s was this evening. Still, Mustaine’s appearance on “Purple Haze” and “Stone Free” (with vocals provided by Henri Brown) remained standouts of the night — as he played a sleek-looking black Dean V, which was painted to look similar to a Gibson Flying V Jimi played.

After the intermission, the audience was treated to veteran bluesman Taj Mahal, who provided rootsy renditions of mostly blues compositions that Jimi covered – “Killing Floor”, “Catfish Blues”, and “Hey Joe”. After Cox reappeared for renditions of “Red House” and “Changes” (the latter serving as another highlight of the evening), the crowd was finally rewarded with what many had had anticipated seeing most, as judged by the raucous reception upon their entry to the stage — a newly-formed/unnamed power trio, comprised of Pinnick on vocals/bass, the Westbury-born Satriani on guitar, and Kenny Aronoff on drums.

Back in the early ‘70s, the term “power trio” was used to describe such acts as ZZ Top, Beck Bogert Appice, and Rush, who took the trio format of Cream and the Jimi Hendrix Experience, and beefed up the volume and musical muscle further. Well, the Pinnick-Satch-Aronoff lineup may be best described as “a power trio on steroids,” because the intensity and groove they mustered during their all-too-brief six-song set (comprised of “Crosstown Traffic”, “Manic Depression”, “I Don’t Live Today”, “If 6 Was 9”, “Third Stone from the Sun”, and the night-closing “Voodoo Child”) was simply astounding. One can only hope that this trio remains together and tours further, offering the masses a full night of Jimi — because trust me, their performance is a must-see/must-hear, as it appears as though each member pushes the other to new heights (particularly Satriani, whose playing was extraordinary this night).

At the very end of the night, all the participants came back out for a final bow. And one thing you couldn’t help but realize by this point — the music of Jimi Hendrix will seemingly live on forever, and continue to inspire future generations. 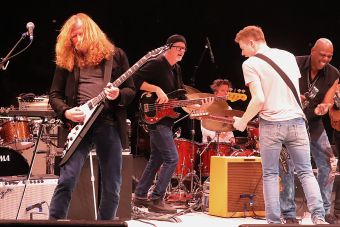 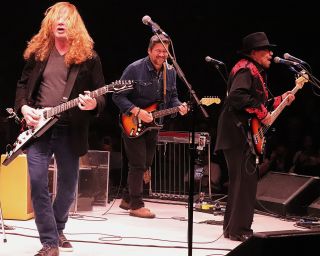 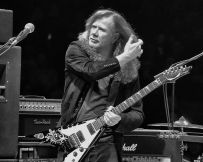 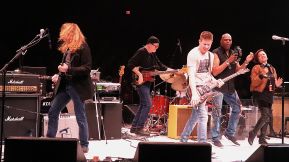 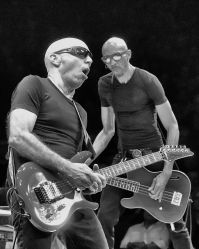 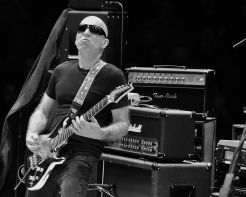 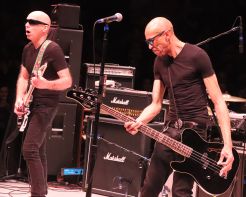 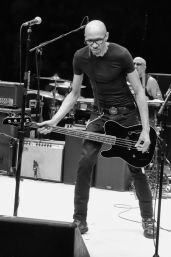 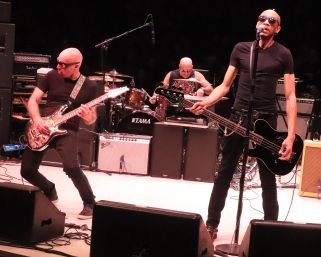 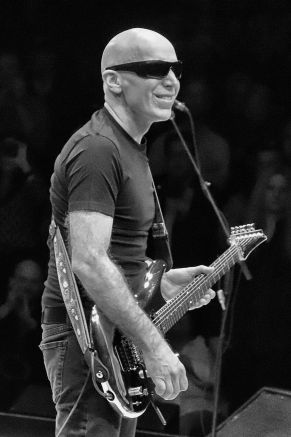 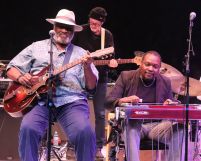 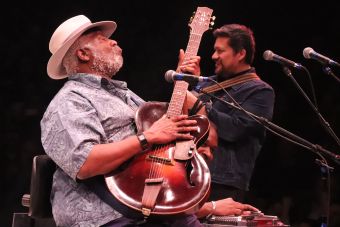 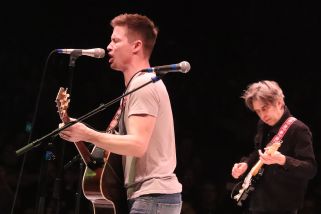 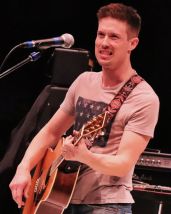 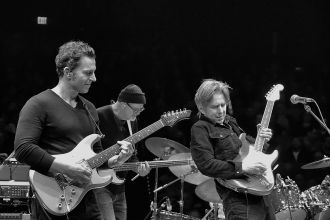 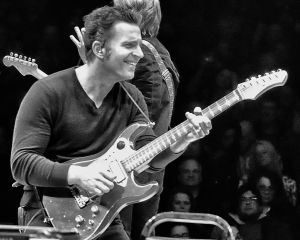 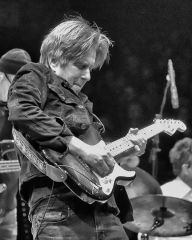 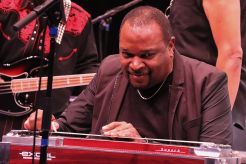 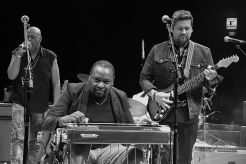 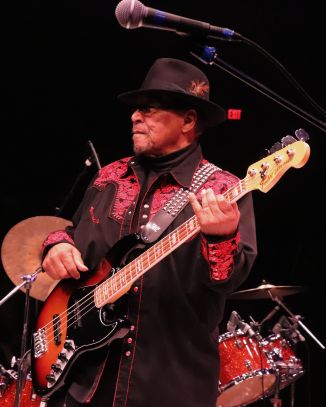 All photos by Steven J. Messina