A memorial service in honor of Nipsey Hussle took place this afternoon at the Staples Center in Los Angeles. Dubbed “Nipsey Hussle’s Celebration of Life”, it featured multiple heartfelt tributes from the hip-hop world and beyond, including Kendrick Lamar, JAY-Z, and even former president Barack Obama.

Obama’s letter, which was read aloud during the service, praised the late rapper’s extensive community work and hopeful spirit.

“I’d never met Nipsey Hussle, but I’d heard some of his music through my daughters,” Obama’s message opened, “and after his passing, I had the chance to learn more about his transformation and his community work.” He added:

“While most folks look at the Crenshaw neighborhood where he grew up and see only gangs, bullets, and despair, Nipsey saw potential. He saw hope. He saw a community that, even through its flaws, taught him to always keep going. His choice to invest in that community rather than ignore it… is a legacy worthy of celebration.”

(Read: Hip-Hop Community Reacts to the Death of Nipsey Hussle)

Kendrick’s own tribute echoed those same sentiments from Obama. “His charisma and way with words was powerful. But his integrity as a person, made me even more enthused,” the DAMN. rapper wrote in an entry published in the service’s program.

“I watched a young, ambitious black male orchestrate fellowship amongst the men around him on that tour,” Kendrick went on. “Determined to execute one thing — and that was Greatness. Greatness in knowledge, greatness in wealth, and greatness in self.” He also described Nipsey Hussle as “a vessel from God.”

JAY-Z, meanwhile, called Nipsey Hussle “a curious soul who was evolving at a speed that was truly inspiring.” He also pointed to the influx of support and condolences in the wake of his passing as “testimony to the love and respect you’ve [Hussle] farmed.”

Jhene Aiko, Vince Staples, Snoop Dogg, Meek Mill, and Big Sean were among the many musical luminaries who were in attendance for today’s ceremony. The entire two-hour event was live streamed on TIDAL.

Below read the full tributes from Obama, Kendrick, and JAY-Z.

In 2009, I remember trekking cities alongside Nipsey and family. Both performing as opening acts on The Game LAX Tour. Our sprinter van trailed their mobile home from state to state.

Though I was a there as support for my brother Jay Rock, Nipsey greeted me as one of his own. And that was very commendable. Casually I would go out to the crowd and listen to the substance he spewed on stage. Thinking to myself, this is the type of talent I want to be apart of. His charisma and way with words was powerful. But his integrity as a person, made me even more enthused.

I watched a young, ambitious black male orchestrate fellowship amongst the men around him on that tour. Determined to execute one thing — and that was Greatness. Greatness in knowledge, greatness in wealth, and greatness in self.

My curiosity about who he really was started to grow from that moment in time. Was he a product if Crenshaw and Slauson? Was he a radical? Or was he a thinker? That mystique kept me engaged throughout his life career. The years progressed, and my admiration grew from up close and from afar. Watching his interviews, his philosophies, and his work amongst the black community.

Time surely revealed itself. I realized Nipsey was all of those perspectives. But most importantly, he was a vessel from God. As my heart aches for him and his family. I understand that the Most High doesn’t make mistakes. I pray that Ermias Foundation continues to blossom. I pray for those who trespass against it.

A true King will be tested in adversity. To stand in fearlessness in what he believes will impact on earth, as well as in heaven. So thank you Nipsey The Radical. Nipsey The Husband. Nipsey The Friend. Nipsey The Great. And from now on, Nipsey The Messenger…… Shalom.

Thank you to @BarackObama for sending this letter for me to read celebrating @NipseyHussle’s life & legacy. 🏁 pic.twitter.com/qwEjjb6O9d 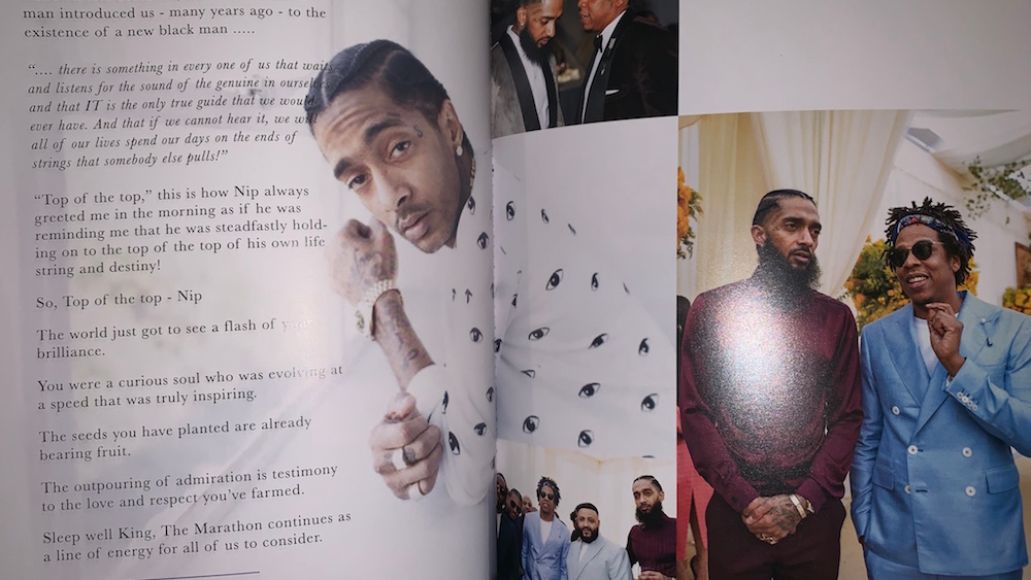 Nipsey Hussle was shot and killed on March 31st at his Marathon Clothing Company in LA. It was recently announced that the same intersection where Hussle was killed will be renamed after the 33-year-old MC.

On April 5th, the primary suspect in the shooting, Eric Holder, was officially charged in the murder of Nipsey Hussle. Prosecutors hit Holder with one count of murder, two counts of attempted murder, and one count of possession of a firearm by a felon. If convicted, the 29 year old faces a possible maximum sentence of life in prison, according to The Hollywood Reporter.