Shudder is keeping things in the family for its forthcoming TV series adaptation of Stephen King and George A. Romero’s Creepshow. Today, they’ve let loose some very exciting details that should no doubt please many Constant Readers in King’s Dominion.

First up, it’s been announced that showrunner Greg Nicotero will adapt King’s harrowing Night Shift short story, “Gray Matter”, which tells an icy tale involving a troubled son, his alcoholic father, and a deadly case of beer. Things get messy, to say the least.

But that’s not all! The episode will feature the one and only Adrienne Barbeau, who returns to the franchise over three decades after she starred in the 1982 original. If you recall, she went toe-to-toe with Fluffy in arguably the strongest chapter, “The Crate”.

It gets even better. Joining Barbeau for what will assuredly be a slimy ride are two other stars in Breaking Bad‘s Giancarlo Esposito and Saw’s Tobin Bell, two men with a resume of playing iconic villains, and who will be an easy fit in the Creepshow lore.

(Ranking: Every Stephen King Movie, TV Show, and Miniseries from Worst to Best)

“I was thrilled when Greg asked me to join the Creepshow world once again,” said Barbeau. “And then working with Tobin and Giancarlo, with Greg as our director, well, that was the icing on the cake — no, not that cake. Oh, you know what I mean.”

“I feel I’m in great company getting the opportunity to direct a story written by Steve,” said Nicotero. “Between Salem’s Lot, Pet Sematary, and The Stand, I’ve always found his stories rich in relatable characters forced into supernatural situations beyond their control—the everyday person’s primal fears. To visualize ‘Gray Matter’ for Creepshow with the help of Adrienne, Giancarlo and Tobin was about as good as it gets for a horror fan from Pittsburgh!” 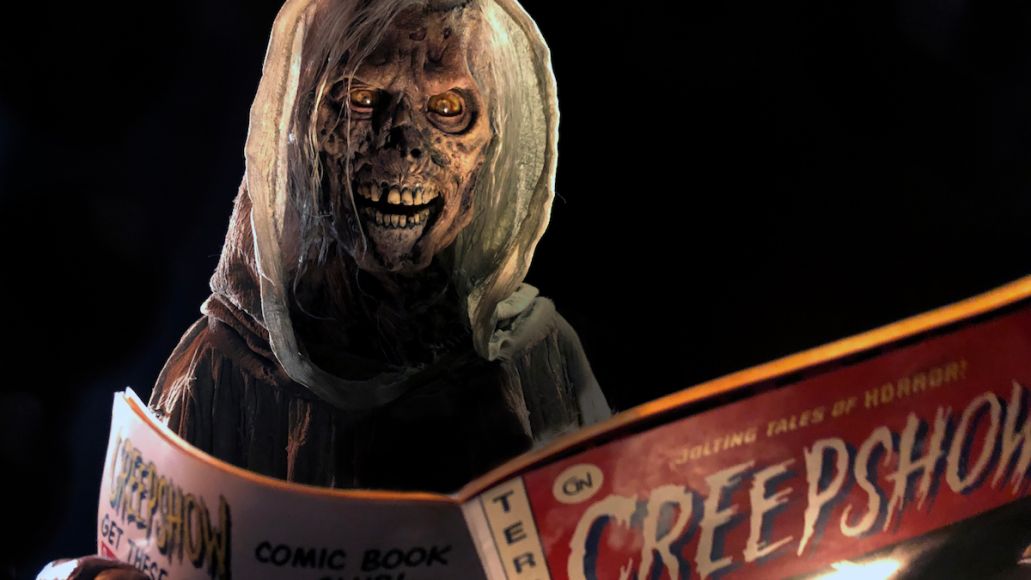 The Creep in Shudder’s Creepshow

Previously, it was reported that Nicotero would be adapting King’s Skeleton Crew story “Survivor Type”, so “Gray Matter” is a pleasant surprise. It joins an eclectic collection of other grisly stories by authors such as King’s son Joe Hill (“By the Silvery Waters of Lake Champlain”), Josh Malerman (“House of the Head”), Joe, Kasey, and Keith Lansdale (“The Companion”), Christopher Buehlman (“The Man in the Suitcase”), Bruce Jones (“All Hallows Eve”), John Esposito (“Night of the Paw”), and Rob Schrab (“Bad Wolf Down”).

The series is expected to bow later this year. In the meantime, stay tuned to The Losers’ Club, our Stephen King podcast, which will undoubtedly discuss this development and many more in the months to come. In the past, they’ve covered both Creepshow films.