The Pitch: It’s the night before the Battle of Winterfell, as the last few stragglers gather in the Starks’ castle before the White Walkers descend. “A Knight of the Seven Kingdoms” picks up where the season premiere left off, offering plenty of long-awaited reunions, closing the loop on a few longstanding relationships, and giving the audience one last chance to simply hang out with these characters before the game-changing fireworks begin and the casualties start piling up.

At the same time, there are still plenty of unresolved details that the episode addresses. We learn how our unlikely coalition of heroes plans to fight The White Walkers, intending to use Bran (Isaac Hempstead Wright) as bait since The Night King (Richard Brake) aims to end this world and the Three-Eyed Raven’s long memory of it. We see Daenerys’ (Emilia Clarke) scheme to take the Iron Throne complicated by Sansa’s promise to the North (Sophie Turner) and Jon’s (Kit Harington) newly revealed heritage. And we witness the return of prodigal sons like Jaime Lannister (Nikolaj Coster-Waldau) and Theon Greyjoy (Alfie Allen), come to make good and reckon with their pasts. Their futures are uncertain, both in terms of whether anyone will survive the coming war and, if so, what their place will be in the world that emerges from those ashes.

“A Knight of the Seven Kingdoms”, then, is a time for Game of Thrones to take stock, to offer codas for minor characters and smaller relationships that may not share in the crescendos of the series’ final quartet of episodes. Before we dive headlong into that night so famously dark and full of terrors, the series grants us a reprieve, to see how far so many of these people have come, and to relish our time with them before they embark on the murky road that lies ahead. 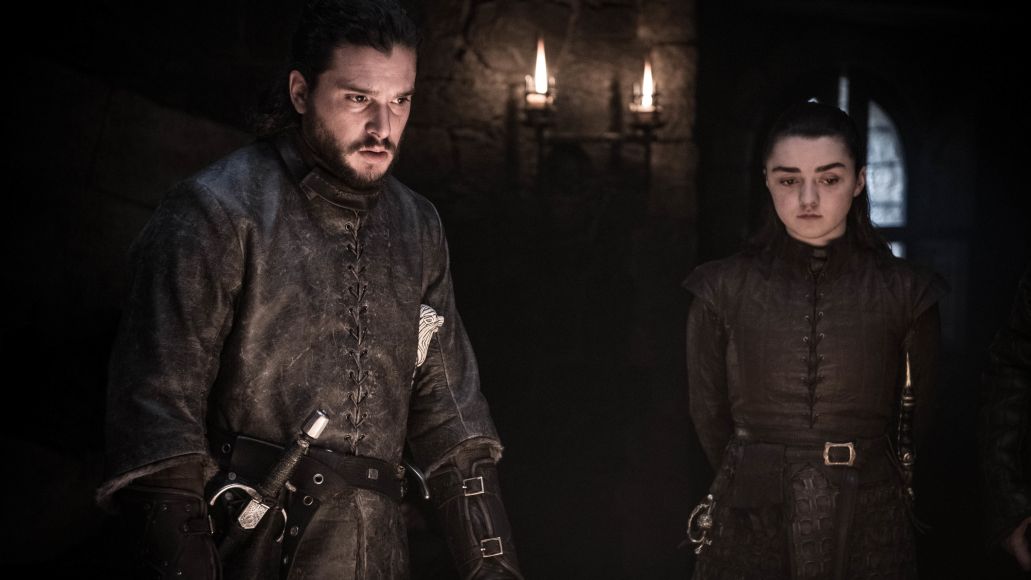 Happily Ever After (Maybe): The episode is ruled by two competing questions: “What comes after this?” and “Does anything come after this?” We blessed few who know there’s another four-pack of episodes in the offing can fairly surmise that the story doesn’t end here. But the characters don’t know that. The repeated refrain in “A Knight of the Seven Kingdoms” is “We’re all going to die,” and with a horde of undead fiends on the move, it’s a fair mantra.

At the same time, however, there’s also a number of conversations about what might happen if the good guys do win the bttle. With Sansa’s challenge and Jon’s revelation, Dany is understandably concerned about what her once-clear (or at least clearer) path to the throne looks like. But there’s still a big question of what her and Jon’s relationship looks like, due to their now-known familial connection, but also Jon’s newly reinstated status as a threat to her claim, and his shock that the woman he loves would believe he’s after her crown.

But others are wondering what a Dany-led Westeros might look like for them. Tyrion fears that, after several errors in judgment, his position as Daenerys’ hand is slipping away. Missandei (Nathalie Emmanuel) and Grey Worm (Jacob Anderson) make plans to return to the former’s homeland when this is all over. “A Knight of the Seven Kingdoms” presents the audience with a superposition of what’s in store, where the main characters both fret over the future while wonder if there is a future. It’s a sentiment summed up by Sam (John Bradley) when he tells Jorah (Iain Glen), “I’ll see you when it’s through … I hope we win.” 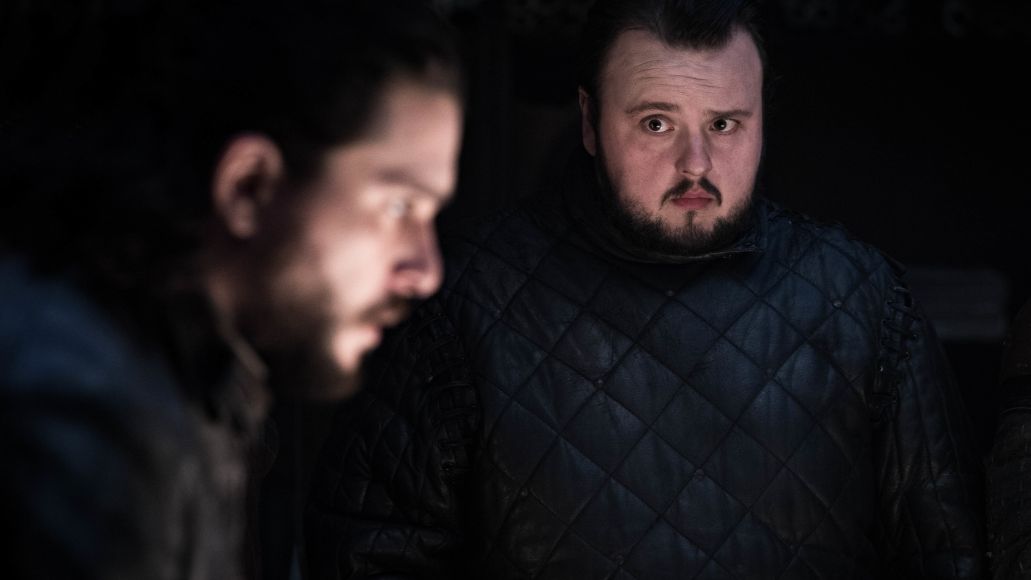 It’s a Small World: Before the White Walkers lay siege to Winterfell, the show adds in all sorts of short scenes for characters who probably won’t warrant a bigger role in the series’ endgame. Gilly (Hannah Murray) gets a chance to help ease the path of a pugnacious little girl who clearly reminds Davos (Liam Cunningham) of poor, lost Shireen. Edd gets a brief reunion with his remaining brothers from the Night’s Watch. Lyanna Mormont has a characteristically fiery exchange with her cousin. And even Podrick gets a chance to show off his fighting skills and his pipes.

But “A Knight of the Seven Kingdoms” is also about small moments for big personalities, like those shared by the group that gathers in Winterfell’s main hall, there to endure the terrible wait for battle’s break in wine and warmth. There’s a “last episode of a sitcom” feel to the scene, as strange bedfellows renew their acquaintances, comic moments are permitted to bloom, and friends and enemies alike compares notes and intertwined histories. It’s a little indulgent at times, but also full of the softer moments and faux-lightness that takes hold when dark things are on the horizon. 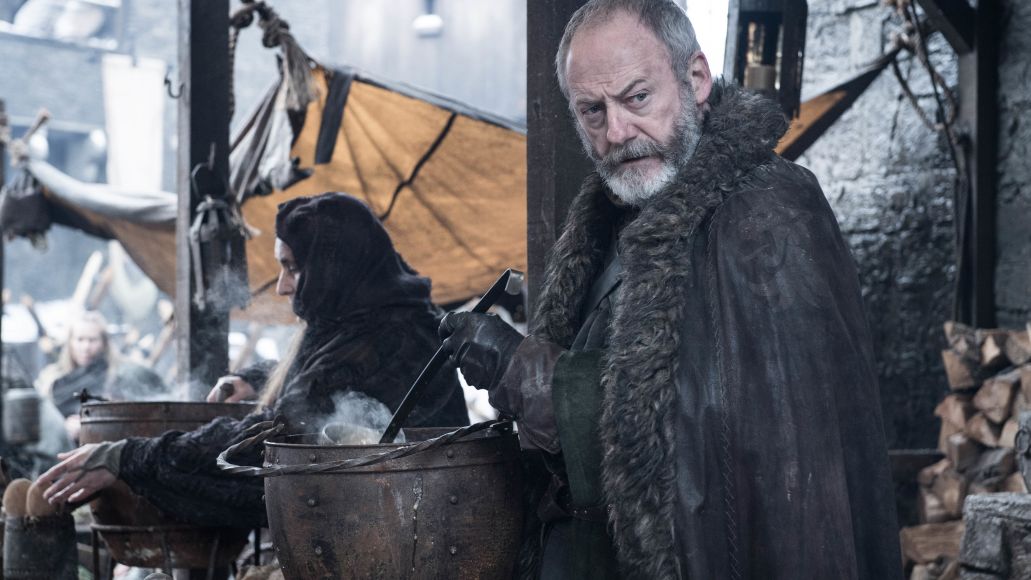 How Far We’ve Come: The other major element of “A Knight of the Seven Kingdoms” comes from measuring the distance between where these characters started and where they are now. Almost every bit of the episode that’s not devoted to speculating about the future, or giving us one last laugh, is centered on charting the growth of everyone in Westeros. The opening scene examines how much Jaime has changed since he first pushed Bran out the window, an event that’s quote-checked by the Three-Eyed Raven himself, and counteracted by Brienne’s (Gwendoline Christie) tales of his loyalty. That comes full circle in the episode’s most touching moment, where their contentious but quietly tender relationship reaches its apex, as Jaime knights his former traveling companion, showing her the respect she’s owed (while patiently fending off a jealous Tormund).

The episode is filled with these remembrances. Tyrion sits to hear Bran’s “long story” of how he went from being the young climber whose fall set all of this into motion, to the lord of creepy stares and conveniently-dropped information. The once-bookish Sam recounts all his battles won and aggressors felled. Theon aims to earn his redemption from when he once took the castle that now provides him safety. And Arya notes how The Hound has slowly but surely learned to fight for something.

But Arya herself is the biggest mover in the episode. Her romance with Gendry, which had been on hold since season three, is suddenly reignited. As rushed as it may feel, it speaks to how much who Arya is has changed since she was last at Winterfell. She is a well-trained warrior now, an adult by the standards of Westeros who, as her exchange with The Hound solidifies, is extraordinarily direct about what she wants and thinks and is. Game of Thrones is still invoking its pilot here (note Arya’s moment with the bow), but also highlighting just how far things have come since then. 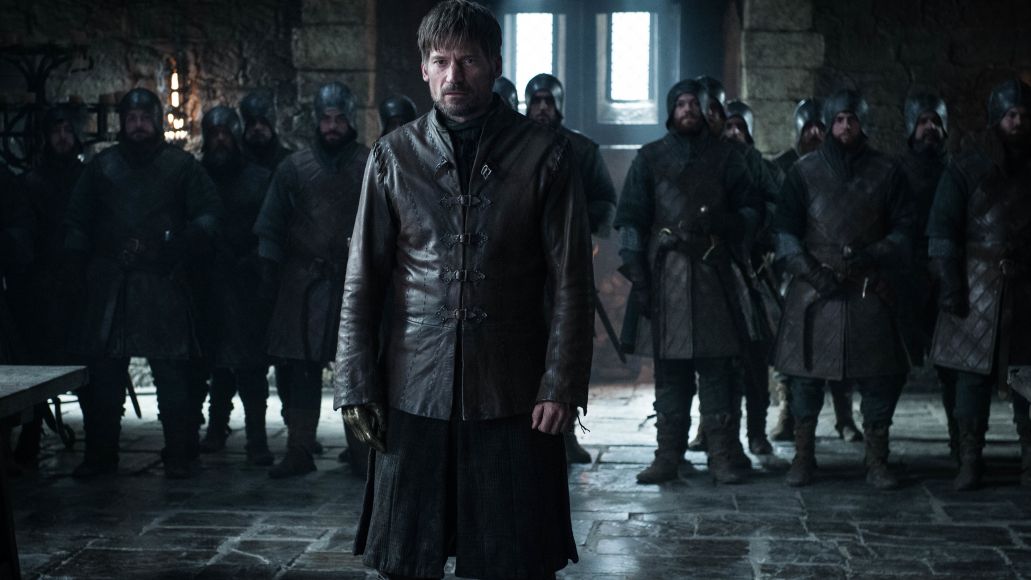 The Verdict: This will be a controversial episode. One set of fans will complain (not entirely wrongly) that “A Knight of the Seven Kingdoms” is chock-full of fan service, rushing to pay off scores of long-simmering relationships and vamping with empty delights in the interim. Another set of fans will see an episode where there is a lot of talking, very little plot progression, and zero action and angrily ask, “When are they gonna get to the Song of Ice and Fireworks Factory?” It’s an episode heavy on theme, atmosphere, and character moments, but light on any forward momentum beyond finally giving The Night King a little motivation.

And yet, once we dive into the momentous events of the series’ final four extended-runtime episodes, we’ll all probably be yearning for a few more interludes like these, when Game of Thrones could take a breath, deliver some of the charm and banter that made it more than a grim, dark tour through a fantasy setting, and let us enjoy the quiet moments before everything has to be heavy and bloody and full of life-changing importance again. “A Knight of the Seven Kingdoms” takes the time to wonder what the world looks like after the game ends, to mark how long the journey has been, and to question how clear the picture of what’s to come can look through that frosted glass. It’s all the better for it.

–When will our heroes fight The White Walkers? Very very soon, unless the final moments of this one are all one big headfake, and we’ll spend the entire runtime of the next episode just chilling with our forgotten friends in Qarth.

–Who will survive the Battle of Winterfell? Anyone who muddies the waters of who might lay claim to the Iron Throne seems poised to make it, so pencil in Dany, Jon, Sansa, and even Gendry to survive given the circumstances. People whose skills at fighting or survival were praised in “The Rightful Queen”, on the other hand, seem like potential casualties, so start saying your prayers for everyone attending Tyrion’s fireside chat, plus Sam, The Hound, and [gulp] Lady Mormont.

–Who will win the Battle of Winterfell? We’re betting on the good guys taking the loss here, decamping for the Iron Islands to regroup, and then making one last stand at King’s Landing.

–Will Bronn kill Jaime and/or Tyrion? We still vote no, but The Night King may beat him to the punch on one or both counts.

–Is/Was Cersei pregnant? Jaime certainly believes that she is.

–Who makes it to the end? I sure hope the list of survivors includes Missandei and Grey Worm, though Game of Thrones seems to be setting us up for heartbreak there.

–Who will sit on the Iron Throne? We’re currently leaning toward a re-division of the Seven Kingdoms, with Dany, Sansa, Tyrion, Yara, and others presiding over their ancestral lands but periodically coming together to form a U.N.-esque ruling coalition.

TV Review: Game of Thrones Enjoys the Last Gasps of Life Before War with "A Knight of the Seven Kingdoms"