The Pitch: It’s the battle you’ve been waiting for over the past eight years. The White Walkers are bearing down on Winterfell; the coalition of the willing in Westeros has girded themselves for war, and a battle to end all battles is in the offing. Almost everyone we know and care about is hunkered down in the North, as the combat en masse begins and a murky, grueling, near-wordless siege of our heroes’ homeland begins.

The fight starts outside the gates of Winterfell, with most of the hardened warriors trying to fend off the frontline attack of the wights. But “The Long Night” also tracks the aerial battle between Dany (Emilia Clarke) and Jon (Kit Harington) against The Night King (Richard Brake) as their dragons stalk one another in the sky. It takes time to focus on the tense calm and eventual unrest in the crypt as Sansa (Sophie Turner) and Tyrion (Peter Dinklage) try to “look the truth in the face” despite their lack of battle prowess.

The episode also follows Arya (Maisie Williams) as she helps even the odds, but eventually must run for her life inside Winterfell. And last, but certainly not least, it follows major events in the Godswood as Theon (Alfie Allen) and Bran (Isaac Hempstead Wright) hope to lure The Night King in to cut off the head of the White Walkers’ forces.

All Men Must Die: “The Long Night” is heavy on death, with plenty of nameless, faceless soldiers (including, apparently, most of the Dothraki) falling at the hands of the undead horde storming Winterfell’s gates. But the episode is surprisingly light on major characters dying given the stakes.

The plot armor that’s irked many fans is out in full force here, as the early deaths in the episode come in the form of characters like Edd (Ben Crompton) and Beric Dondarrion (Richard Dormer) who, while well-liked, would go missing from the show for seasons at a time. Even Lyanna Mormont (Bella Ramsey) — whom we’ve stumped for on more than a few occasions in this space — gets a cool death as the the smallest thing on the battlefield takes out the biggest, but she’s pretty low on the list of major characters.

Still, there’s a trio of big deaths to contend with in “The Long Night” with mortal ends that wrap up the arcs of some significant characters. Most notably, Theon dies at the hands of The Night King as the (seemingly) last line of defense for Bran. But before Theon perishes, the Three-Eyed Raven thanks him and grants him absolution, telling him that his choices brought him where he’s meant to be, back to his home and, most importantly, that even after everything he’s done, Theon is a good man. It is as kind and noble an end for Theon as anyone could expect or hope for. 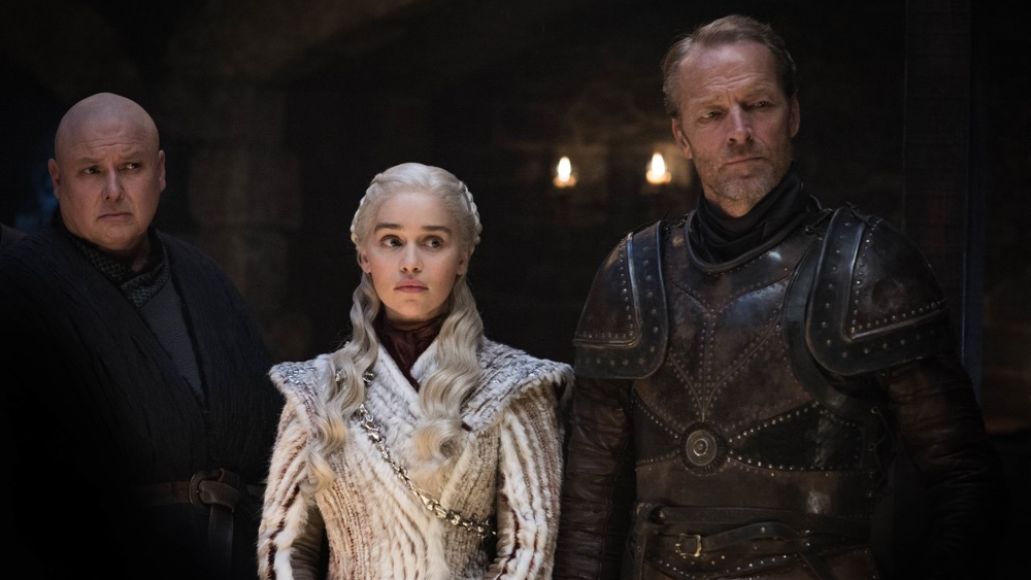 Jorah Mormont (Iain Glen) also goes out the way he might have wished to, fighting with all his might to protect Daenerys Targaryen. When his khaleesi falls to earth, Jorah swings his Valyrian steel sword like a man possessed, holding off the attacking undead until they find a break in the storm. And when Jorah is finally done in by his wounds, he earns the tears of the woman he loved and the rare honor of a dragon’s sympathies in the middle of the battlefield.

And Melisandre (Carice van Houten) returns one last time, as she foretold to Varys (Conleth Hill) last season, to “die in this strange country.” But before she does, she manages to harness her magical powers to light up weapons and barriers and help our heroes withstand the assault, and tips off Arya to her destiny. Melisandre dies not by the sword, but by discarding the magic necklace we learned the power of back in Season Six, collapsing as age and infirmity overtake her in an instant. The death count for named characters in the episode is lower than we might have expected for an episode like this one, but Game of Thrones at least makes them count. 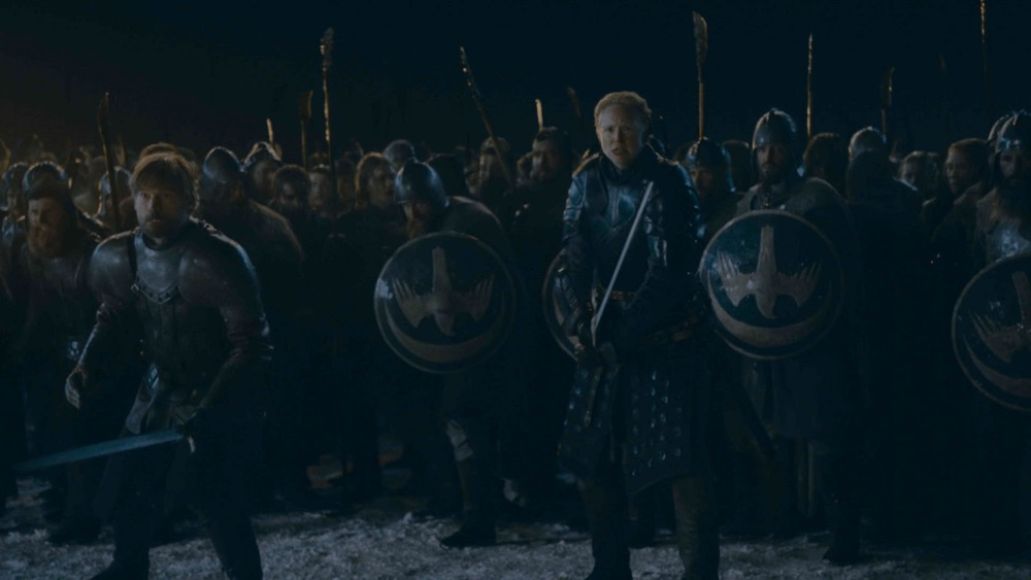 But the episode also fails in making any or all of this clear, simple, or even possible to follow. It’s easy enough to piece together the general flow of battle, to tell when Jon and Dany are disoriented in a blizzard blast or Arya is fleeing from wights through the house where she was raised. But figuring out who’s alive, who’s dead, and who’s merely dying, where each of these incidents take place in relation to one another, and the cause and effect of all these grisly events soon becomes an opaque nightmare amid the rapid fire cuts, murky lighting, and array of images bleeding into one another throughout the episode.

In a few rare places, “The Long Night” departs from that approach, giving us isolated scenes or extended sequences with firelit clarity or overhead geography to try to overcome that muddiness and communicate a sense of connection and scope. And in others, the show’s ability to convey the dizzying hellscape of the battlefield, as seen in “The Battle of the Bastards”, works as a deliberate creative choice. But extended to mini-movie length, what should be Game of Thrones’ most epic battle only intermittently earns that title, more often devolving into a muddle of flame and flesh that tells the viewer something horrific is going on, without ever really making it possible to process the battle as a whole.

So, What Now? In one fell swoop, Arya Stark ends the war against the White Walkers, a fight which lingered on the edges of the frame for Game of Thrones for years until it sharpened into focus at “Hardhome”. As she stabs her blade into the breast of The Night King, in the same spot the Children of the Forest used to create the White Walkers in the first place, all of his undead countrymen shatter and fall into nothing like a scene out of Ender’s Game. After so much build-up, after coming so close to defeat, that single blow ostensibly neutralizes the series’ longest-running menace.

That leaves the audience to wonder where Game of Thrones has left to go in its final three episodes. A confrontation with Cersei is in the offing, and with it, a contest to determine who sits on the Iron Throne. But another internecine skirmish among regular human beings may seem anticlimactic, if not out-and-out quaint, after we witnessed the masses of zombies, magical flaming swords, and dragon-on-dragon violence come to the fore as the series’ most mysterious-yet-deadly forces made their play.

And yet, while the titular quest to rule Westeros seemed less important in the shadow of that fight, the series has always been about balancing those dramatic fantasy stakes with more grounded human drama. Maybe Game of Thrones can return to that focus while it sets Cersei as the last thing standing between our heroes and the seat of power in the Seven Kingdoms. 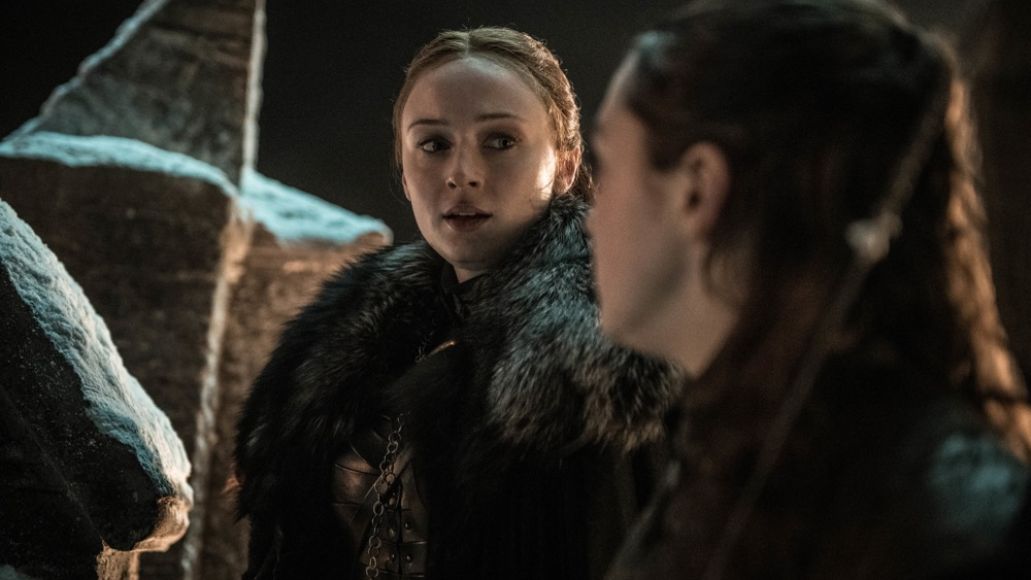 The Verdict: “The Long Night” can’t help but feel like something of a disappointment. It would be difficult, if not impossible, for a confrontation the series has been hyping up since its very first episode to ever fully live up to expectations. And yet, even judged on its own terms, the long-gestating Battle for Winterfell is difficult to follow, occasionally even impossible to discern, and ends the most existential threat the series has built up over the course of its run with a “one good hit kills them all” solution that feels more than a little cheap.

Game of Thrones has shown time and again that it can do battles without losing character, visual splendor, or narrative momentum, and some of that talent is on display here. The ambition of this climactic episode is commendable, with the laconic dialogue and emphasis on the score and acting to tell the story in particular proving laudable choices. The show, however, not only muddled its biggest fight ever with dim lighting and quick cuts that reduced the battle to little more than a morass of indiscriminate bodies writhing in darkness, but dispatched what had been built up as the series’ greatest mortal threat with one lucky break and a minimal death toll among characters whose names we know.

The sense of creeping hopelessness of “The Long Night” was expertly crafted, but the battle meant to support that sense was nigh-impossible to make out, and ultimately weakened by how simply that apocalyptic fate was avoided, as Arya and the pointy end win the day.

–When will the remaining good guys fight Cersei? Our bet is one more episode of setup, with the final clash happening in episode five, and the aftermath and questions of who claims the throne taking up the series finale.

–How do the remaining good guys stack up against Cersei’s forces? Cersei has Euron’s Iron Fleet and the 20,000 men, horses, and other elephantless reinforcements from the Golden Company. Dany and company have many fewer Dothraki, many fewer Unsullied, and many fewer Northern soldiers to try to take King’s Landing. Cersei seems to have the advantage for now, but Dany still has, you know, a dragon.

–Will Bronn kill Jaime and/or Tyrion? Both Tyrion and Jaime (Nikolaj Coster-Waldau) survived the Battle of Winterfell. After that, what’s one guy with a crossbow?

–Is/Was Cersei pregnant? If so, we hope that there’s prenatal vitamins in Westerosi Wine.

–Are the White Walkers gone for good? Sadly, the answer is probably yes. Though we wouldn’t put it past Game of Thrones to have some blowback from the war with the wights pop up in at an unexpected time and place.

–Who makes it to the end? We’re still betting that anyone with the last name Stark, plus The Dragon Queen, survives the whole deal, give or take a three-eyed raven.

TV Review: Game of Thrones Slays the Stakes Amidst the Darkness of "The Long Night"