Track by Track is a recurring new music feature in which we task an artist to give some in depth insight into their latest full-length release, one track at a time.

Charly Bliss have today debuted their sophomore album, Young Enough. Stream the entire thing below via Apple Music or Spotify.

The follow-up to 2017’s Guppy, Young Enough was recorded with producer Joe Chiccarelli (The Shins, The White Stripes). Entering the studio after releasing their breakout debut, the New York power pop act were determined not to repeat their sound. They assured that by tapping into a newfound confidence in songwriting, even as their songs again dealt with framing “the darkest lyrics in the context of upbeat songs.”

(Read: 20 Essential SXSW Acts to Catch on Tour This Spring)

Frontwoman Eva Hendricks used the album to work through her personal traumas, like the sexual assault she confronts on “Chatroom” or the struggle to break with such an abusive relationship on “Hard to Believe”. The record’s lead single, “Capacity”, finds her fighting for self-reclamation, emancipating herself from the BS of other people and her own damaging internal dialogue.

Take a listen to the full thing below, and get tickets to Charly Bliss’ current tour here.

For more on what went into Young Enough, Hendricks has broken down the album Track by Track.

“Blown to Bits”:
I started writing this song the day that everyone in Hawaii was alerted to a nuclear missile headed their way. Luckily it ended up being a false alarm, but that day I couldn’t stop thinking about actually living out the end of your world, and THE world, and how devastated I would be by the loss of things that are for the most part, really simple and small. To me, this bizarre event and the feelings of panic and global mistrust that ensued also echoed all of the horrible events that have taken place politically in our country in the past several years. This is a love song to little moments that make me feel like we might make it out the other end.

“Capacity”:
Our anti-people-pleaser anthem! I’ve always framed this song negatively, as in, it’s about wanting to kill off this self-sacrificing part of my personality that I really despise, but if I frame it positively, it’s about learning to trust your gut, especially when your gut is telling you that there is a tremendous amount of bullshit clogging your brain and draining you of your life-force and the things that make you like and respect yourself! It is so cool and feels so good to say no!

“Under You”:
At first glance, a total mush of a song about the magic of falling in love with somebody who has what it takes to love you back right. Also a song about how bizarre it is that all relationships, regardless of how they’ll turn out, start out that way — bubbling, beautiful, thrilling; even if they end horribly and briefly destroy your life.

“Camera”:
I wrote this while I was on hold with TD Bank because my credit card was stolen by someone who had used $556 to buy a camera at B&H. It made me think about how big and random the world is, and how maybe this person had a really good idea for a movie that they were determined to make by any means necessary (we made the “Westermarck” video for $40, I can relate to this!), and I was totally ruining their brilliant idea by alerting my bank and closing the card. Then I got sad thinking about how unlikely that is, and how they were probably just going to re-sell it or use it for something really fucked up and awful. 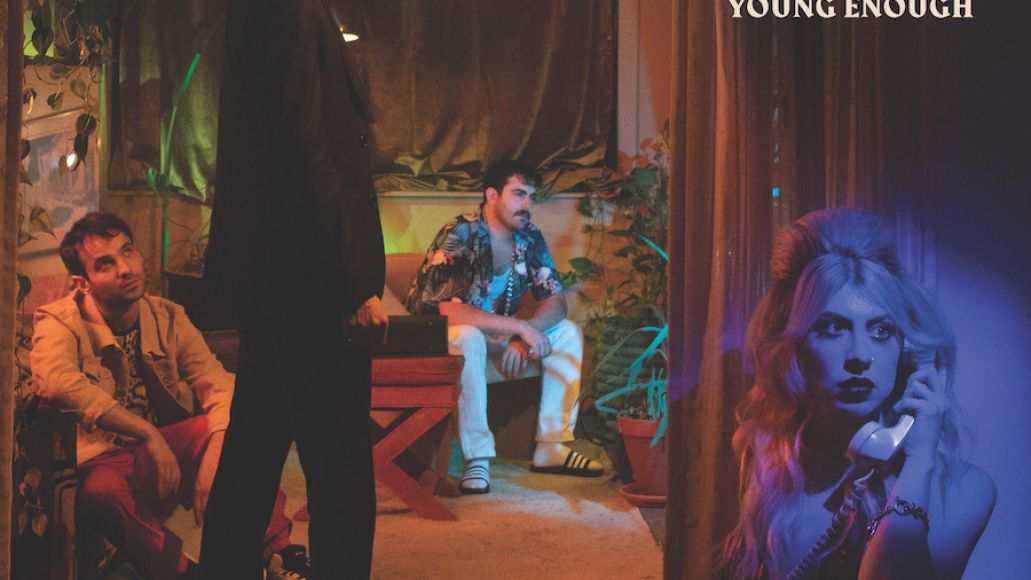 “Fighting in the Dark”:
This is the last song that was written for this album. I wrote the lyrics after a really brutal but ultimately positive therapy session in which I felt that I had finally wrapped my head around certain aspects of this experience with sexual assault that had previously felt impossible for me to understand or face. Originally, I wrote it as a bridge to a song that didn’t make the cut, but the lyrics felt like the perfect final word on the subject matter for this album and I’m so glad that it made it on as a sort of emotional interlude from one thematic portion of the record to the next.

“Young Enough”:
We all love this one. I’ll never forget when Sam [Hendricks] came to me and said, “I have an idea for a song that has one chord that never changes all the way through it and for some reason I know it’s going to be the best song on the album.” I was ready to strangle him when he told me this because it felt like he was giving me literally nothing to go off of, and all the pressure in the world was on our shoulders as we started fleshing it out! But as soon as I heard his first demo, I completely agreed. I wanted to help out and just not fuck it up on this one. Simultaneously, it felt like there was some weird, sibling magic that was leading the way while we wrote it. We both knew when something wasn’t quite right even when we didn’t know what could fix it, and we both knew when to drive and when to step back.

Lyrically, this song is the centerpiece of the album. I can’t help but hear it as proof of how much we’ve grown and I’ve grown since our first album. This song and nearly all of the songs on Guppy are about the first time that I fell in love. When we were writing Guppy, I felt so frustrated and furious about all of the reasons why that relationship didn’t work out, and the songs clearly reflect that. However, Young Enough as an album is about a different relationship, one that was sinister and damaging and abusive, and it gave me a lot perspective. It’s kind of a total privilege to have your first major relationship be with someone who absolutely loves you but just can’t get it together to give you what you need, and vice versa. This song is about feeling nostalgic for a moment in your life when you really believed in the teen-drama, Twilight-era trope wherein a relationship being painful meant that it was worth it. It’s about feeling grateful that someone tried to love you as best they could, and simultaneously feeling even more grateful that you don’t buy into that anymore and you’ve made it out the other side.

“Bleach”:
This is a song about trying to hold onto hope and things that are beautiful when the world feels like a political nightmare hell-scape. The song is supposed to feel like an intertwining explosion of melody that serves as a release after the build of “Young Enough.”

“Chatroom”:
I was sexually assaulted by someone that I dated and it took me years to admit it to myself and then sort out my feelings and stop blaming myself for it. Listening to “Chatroom” makes me feel strong. I think of it as a joyful song about removing toxic waste and garbage-people from your life. The bridge lyrics, “I am trusting/ Well-adjusted/ Marked me dormant/ I erupted…” always make me cry. Part of healing is admitting that something really awful happened to you, and not avoiding it or sugar-coating the facts. At the same time, it feels really powerful to say that in spite of what happened, I still really like myself, and this person’s actions didn’t destroy any of the fundamental aspects of who I am.

“Hurt Me”:
Another Young Enough buzzer-beater! I had been listening to a lot of Bruce Springsteen, specifically the song “For You” and I thought about how I really wanted there to be a more intimate moment on the record. We had also just seen Lorde on her Melodrama tour and loved how the song “Liability” felt like such a perfectly placed outlier in her set. Stylistically, this song is maybe the biggest departure for us, but I love the dynamics and diversity that it brings to the album. This song is about loving someone even after they give you a million reasons not to.

“Hard to Believe”:
I just remember Sam showing us this guitar riff that he had thought of and we used to end every band practice by doing it over and over again because it was so fun to play. It took us way too long to finally turn it into a full song, but I still feel just as thrilled playing that riff whenever we perform it live.

“The Truth”:
Without a doubt one of my favorite songs on the album. Originally, the chorus to this song was totally different, and the lyric was “all I can do is tell the truth,” which was sort of my mantra when we were writing Young Enough. However, the melody I’d written wasn’t working, so Sam came in and totally rewrote the chorus and made it a zillion times better. Regardless, I think the spirit of the song is still the same. It’s so hyper-specific and detailed that it almost hurts to listen to it, but melodically and instrumentally, “The Truth” feels like a triumph, and therefore the perfect note to end the album on.