The Pitch: High schooler Maggie (Diana Silvers) moves from San Diego to her mother’s (Juliette Lewis) small hometown in Ohio. Despite the standard anxieties that come with being the new kid, Maggie manages to quickly fall in with her own crowd. She befriends the smart-mouthed Haley (McKaley Miller), who invites her to party with her friends. After several failed attempts at convincing an adult to buy them liquor, their dreams of intoxication seem to be dashed, until they happen upon Sue Ann (Octavia Spencer), who volunteers to buy the kids a boxful of booze.

Over the next few weeks, the middle-aged veterinary assistant ingratiates her way into the group’s social lives by providing them with alcohol and a basement to party in. The parties soon become wilder, and more of the high schoolers come over to party at Sue Ann’s place, who the kids start calling ‘Ma.’ While the local teens initially see Ma as a lonely woman looking to relive her youth, Maggie begins to suspect that there’s something more sinister behind Sue Anne’s motivations.

It May Be a Teen Slasher, But the Adults Are Killing It: Ma is the latest collaboration between Spencer and director Tate Taylor; their best-known project together is The Help, and now the two have decided to do a full tonal 180. Spencer has been vocal about the pivotal nature of the part, as women of color have historically been denied leading roles in genre movies.

Throughout Ma, Spencer’s performance is the highlight and most captivating aspect of the movie. Sue Anne is funny and warm in one scene, cold and terrifying in the next. Spencer is able to communicate volumes with her facial expressions alone, a skill Taylor highlights through a heavy volume of close-ups. At one point, Ma’s face is seen reflected multiple times in a beveled mirror. The effect is simultaneously campy and creepy, the glitz of Ma’s outfit contrasting with her dead-eyed stare.

Ma begins with Sue Anne appearing to be the type of character for which Spencer has become known: warm, sassy, motherly. As the story progresses, however, the film looks past the façade and through to the wounded and dangerous soul underneath. It’s no surprise that Ma’s flashbacks are set in the ‘80s; Spencer fluctuates from the knowing menace of Freddy Krueger to the cold silence of Jason Voorhees. Spencer sustains her portrayal of Ma as a likable mother figure even as she grows malevolent, which makes her all the more terrifying.

Her performance is supported by a strong supporting cast of veteran performers. Juliette Lewis plays Erica, Maggie’s mom, as a woman having to swallow her pride and return to her small hometown after a failed marriage. The performance is strong, with the banter between Erica and Maggie offering some excellent mother-daughter chemistry. Erica is situated as a woman trying to make the best of a situation that represents her great failure: having to move back to her hometown. Lewis brings out the frustration underneath the optimistic attitude Erica takes with Maggie.

Another scene-stealer is Missi Pyle as Erica and Sue Anne’s former high school bully, Mercedes. Despite her limited screen time, Pyle’s Mercedes is instantly recognizable as the former tormenter in every hometown. At one point she finds Erica working at the local casino and tries to make shame her for leaving her small town and coming back – despite the fact that Mercedes herself never left at all. She manages to make a fool of herself in public, yet she also reminds Erica of the pains of adolescence, and the long-term traumas high school seems to inflict on everyone.

With such a standout adult cast, however, the rest of the teenagers ultimately get lost after a while. While their performances are good, especially for a lower-budget horror movie, most of the young actors don’t stand out among a crowded roster. The exception is Silvers, the younger cast member with whom the film spends the most time, and she makes an excellent proxy for the audience. The film asks a lot of Maggie, darting between anxiety at being the new kid in school and finding love with Andy, the standard teenage angst with her mother, and the eventual  terror inflicted by Ma. The rest of the high school characters seem to lack, well, character. They’re supposed to represent high school tropes, and wind up forgettable. This is, however, more due to the screenplay than the actors; the adults are the film’s true focus. 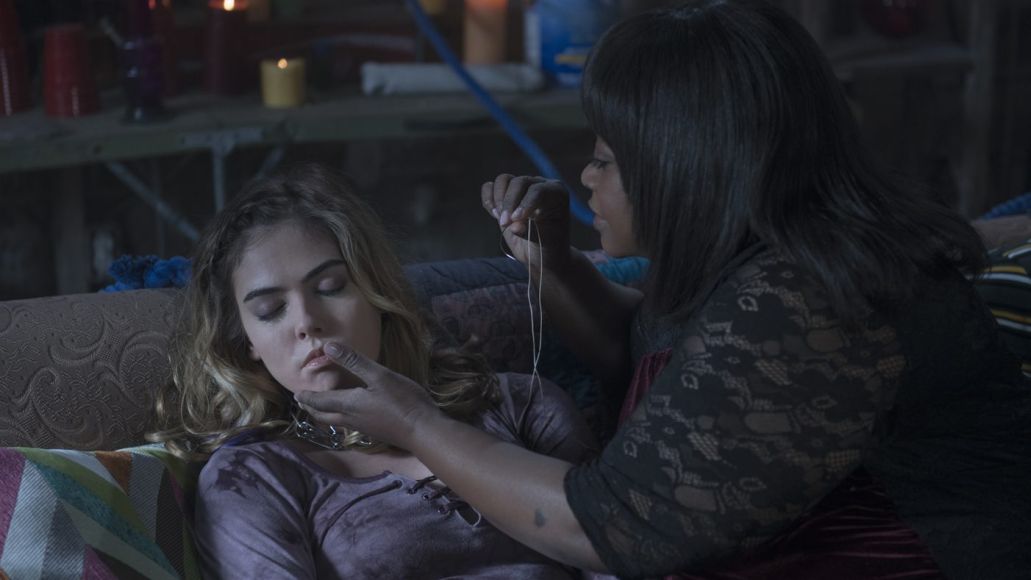 Split Personality: Ma isn’t a horror movie so much as a thriller with horror elements; Taylor takes his time in building up to the true scares. The early scenes spend a fair deal of time dealing with more mundane teenage problems, and despite her occasionally creepy actions, at first Ma seems more like a desperately lonely woman than a threat. But as the suspense ramps up, so does the violence. It begins with a hit and run, but as Ma begins to unravel, the deaths grow more complex and disturbing.

Yet even as the story turns darker, there’s always an element of humor to the film, with Spencer’s wit repurposed for dark comedy here. The blending of humor and horror remains engaging throughout, and as a thriller, Ma feels tight and assured. There are a few subplots that appear to have been condensed to trim the story, such as a Munchausen syndrome-by-proxy subplot that feels a little underdeveloped in trying to portray another layer of Ma’s villainy, but it doesn’t hurt the overall flow of the film.

The Verdict: Blumhouse Productions continues its streak of solid genre features with Ma. The film is a wild ride, with Spencer’s gleeful performance at the helm. The plot manages to subvert expectations for Ma’s true motivations, and the finale successfully pays off hints the audience doesn’t initially realize were even there. Ma relies on building fear over jump scares, and when the violence comes, it’s intense without feeling overwhelming. Ma may not cover entirely new ground, but the execution still manages to be refreshing.

Where’s It Playing? Ma creeps into theaters on May 31st. Join in the party and grab some tickets!