Gojira made headlines over the weekend when their guitarist Christian Andreu was engulfed in pyro flames during their set at Sonic Temple Art + Music Festival in Columbus, Ohio, over the weekend, and our photographer captured the moment of impact.

The guitarist was forced to leave the stage with minor burns on his face when a gust of wind blew back the band’s stage pyro right into Andreu. Like a trooper, though, he came back and performed the rest of the set.

Our photographer, Amy Harris, was on hand to shoot the festival, and caught the exact moment the flames scorched Andreu (see above), as well as the split second before the flames hit him (see below).

Lamb of God vocalist Randy Blythe, who had performed onstage with Gojira at the festival, recounted the incident, writing on Instagram:

“Yesterday at @sonictemplefestival, my brothers in Gojira took the stage & destroyed the place. I lost track of time & forgot when they were playing- when I realized they were on, I went running to the stage with my camera. I got there right as they were playing “Backbone”- their tech @notoriouswog was like “Here’s your mic!”- I took off my glasses, put down my camera, & ran out onstage wearing flip-flops (which I immediately kicked off- hard to rock in flops) & started singing. Suddenly there was a HUGE blast of flame- SCARED THE SHIT outta me, ‘cause I didn’t know they had pyro! Anyways, I got done singing, shot a few photos, then ran to my dressing room to get a different camera lens. When I got back, Woggsy said “Christian just caught a blast of flame to the face!”- the wind was REALLY bad yesterday, & it blew the pyro right into Christian’s face- THANK GOD HE HAD HIS EYES CLOSED at that second! I looked at him & he was still playing, mostly with his eyes closed, obviously hurting & looking PISSED OFF. In between songs he walked over & asked for water & threw it on his face. Then he finished the set, & medics attended to him. He’s gonna be alright (except for some peeling & missing hair & eyebrows) but that was scary & it could have been really, really bad.”

Video of the incident was also captured by fans, and can be seen below. 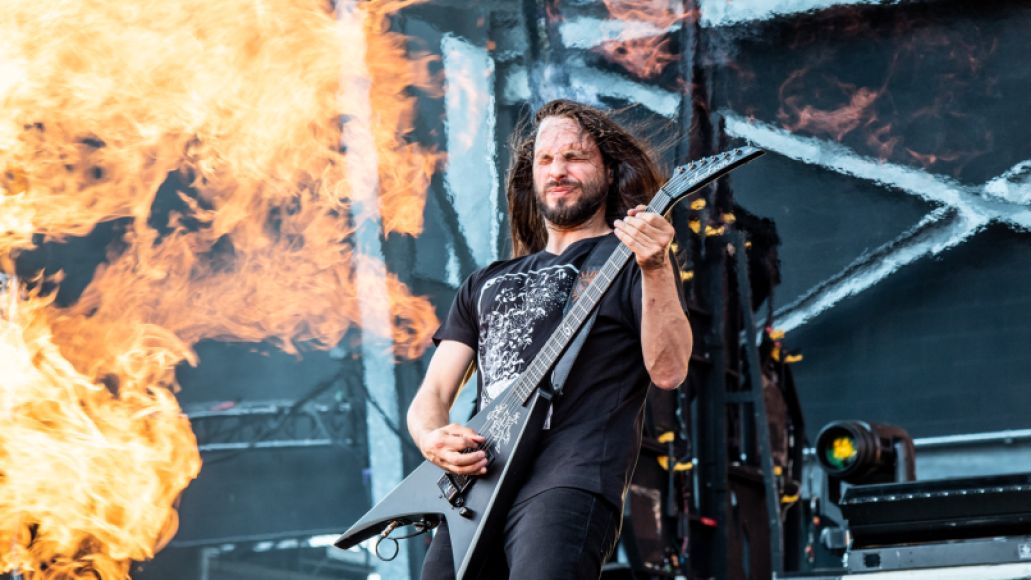