Every now and then, the New York Police Department does something that sounds like a Brooklyn Nine-Nine episode — you know, something that’s either totally unaware of ethics or entirely in jest. It’s like that time the NYPD called for a boycott of Quentin Tarantino or when they traded Die Hard tweets with the Los Angeles Police Department on Christmas Eve.

Other times, the NYPD walks straight into racial profiling with the city’s longstanding hip-hop community, like a recent investigation into a police commander who told his officers to “shoot [50 Cent] on sight.” Now, it looks like the NYPD has formalized their efforts to track down crime within that very community.

According to The New York Post, the NYPD has on-the-ground operations conducted by the department’s Enterprise Operations Unit that’s known as the “Rap Unit”. The unit compiles a list of weekly entertainment reports about upcoming rap shows. The concerts chosen are then designated as posing a “low, medium, or high risk for violence or other crimes.” Local precinct commanders and intelligence offers collect the weekly reports. Meanwhile, local cops flag shootings and other incidents tied to clubs in their precincts. These records tie any cops assigned to the Rap Unit to a program called the New York/New Jersey High Intensity Drug Trafficking Area, which “uses federal money and resources — including Drug Enforcement Administration agents — to crack down on narcotics production and sales.”

(Read: Protest Music Disappeared in a Year of Protests)

The Rap Unit made one of their biggest moves at a Remy Ma concert in March 2018. The unit was eyeing Ma, who is on parole after serving six years in prison for a 2007 shooting, and entourage member Jahmeek “Jah” Elliot, who is a “person of interest” because of suspected gang ties and 26 prior arrests. An undercover officer was reportedly planted at that 2018 Irving Plaza concert to gather intelligence. Last month, Ma was arrested for allegedly assaulting Love & Hip Hop New York co-star Brittney Taylor at an Irving Plaza benefit concert in April.

Ma isn’t the only artist on their radar. According to NYPD emails, they considered taking police action over 50 Cent back in 2016. When he saw the rapper was scheduled to perform at Club Lust, a sergeant at Patrol Borough Brooklyn South contacted multiple high-ranking officers at the local 72nd Precinct. “Any plan being put into effect for 50 Cent appearing on Thursday at Club Lust?” his email reads.

In fact, the Rap Unit regularly kept track of who was stopping through Club Lust. Tekashi 6ix9ine frequented the club and the Rap Unit was regularly alerted to such through emails and phone calls. There’s also documentation of the Rap Unit following performances by Jersey City rapper AlBee Al, East Brooklyn rapper Billy B, and Power 105.1 radio station host DJ Self.

(Read: In a Rap Beef, There’s No Such Thing as Crossing the Line)

Apparently not every rapper is worth fretting over. When a commanding officer had “some concerns” about an upcoming Kodak Black performance in 2017, a Rap Unit detective told him not to fret. “Kodak is a loud mouth knuckle head. However, there have been no issues with him in NYC. In addition, he’s on probation. So if he does anything wrong at all, hes going right back to jail and hes aware of that as well as his people around him,” the detective wrote. “So it’s possible that and more than likely that we wont even be attending this event at Lust … If itll make your CO feel better, if he does get out of jail (which I doubt) in time to go to this event, I will reach out to him management and speak with them… But like I said, hes simply a big mouth young kid. He’s actually intimidated of NYC. So he just wants to fulfill his contract, [and] then leave.”

Needless to say, most people in the local hip-hop community aren’t impressed with the Rap Unit. “My impression of the hip-hop police is they’re this shadowy, specialized unit that conducts overly aggressive investigations,” said Remy Ma’s lawyer, Dawn Florio. “They’re constantly stalking high-profile rap artists and monitoring their every move.”

The NYPD views it differently. Sgt. Jessica McRorie, an NYPD spokeswoman, credits the unit with aiding “several major prosecutions” and “responding to shootings and assaults that may occur at all kinds of entertainment venues.” She went on to further support the Rap Unit, telling The Post, “The Enterprise Operations Unit focuses on venues or entertainers that have been connected with past acts of violence — regardless of musical genre. The primary goal of EOU is to anticipate, based on past incidents, where there is a significant likelihood of violence, and to take steps to prevent people from being hurt, or worse.”

Below, see an internal memo from the NYPD Intelligence Division regarding the Remy Ma concert at Irving Plaza, courtesy of The Post. 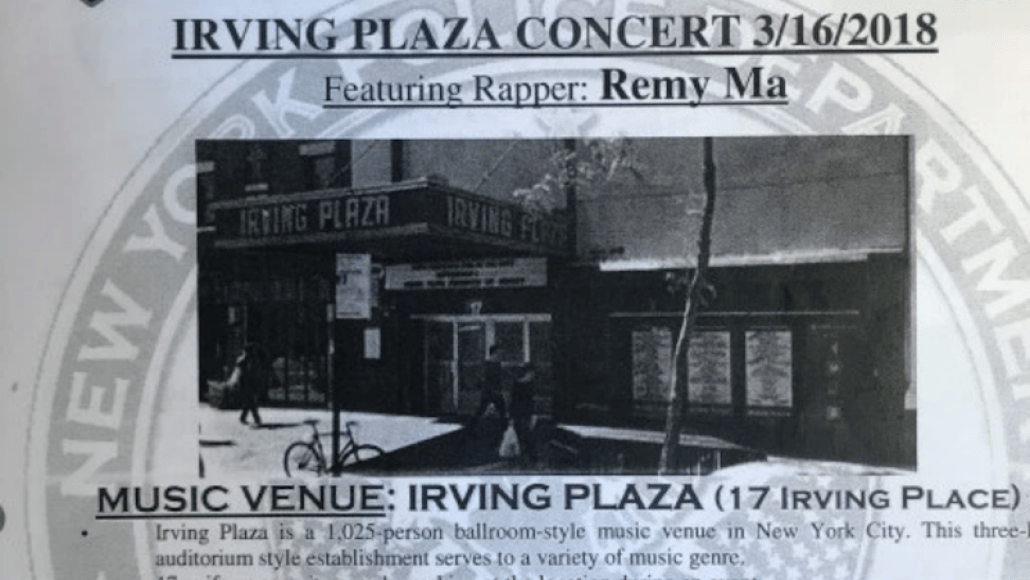