The Pitch: The latest take on the private eye opens in New York City circa 1989. A failed assassination attempt on John Shaft II (Samuel L. Jackson) forces girlfriend Maya Babanikos (Regina Hall) to leave Shaft for good, taking their young son with her in an attempt to shield him from the violence that surrounds the Shaft family. Almost two decades later, John Shaft, Jr. (Jessie T. Usher) — a.k.a. J.J. — is working for the F.B.I. as a cyber analyst. When a childhood friend overdoses on heroin, J.J. gets the feeling that there’s something more nefarious going on under the surface, and he recruits his estranged father to help him solve the case.

Who’s The Black Private Dick Who’s A Sex Machine To All The Chicks? The 1971 release of Shaft arrived on the heels of Sweet Sweetback’s Baadasssss Song and Cotton Comes To Harlem, and became a watershed moment in black cinema. Based on the novel by Ernest Tidyman, one of the few white men to ever win an NAACP Image award, the Ohio newspaper writer-turned-crime author saw John Shaft as “a black hero who thinks of himself as a human being, but who uses his black rage as one of his resources, along with intelligence and courage.”

Tidyman wrote the novel quickly, and sold MGM the rights to the novel based solely on galley proofs. Tidyman adapted the novel himself alongside screenwriter John D.F. Black, while photographer Gordon Parks signed on to direct the pulpy detective tale. The film touched on issues of race, black power, and masculinity, but at its core was an entertaining, two-fisted, hard-boiled detective tale in the vein of Mike Hammer stories.

Shaft went on to become a massive hit for MGM in the summer of 1971 and garnered two sequels: 1972’s Shaft’s Big Score! and 1973’s Shaft In Africa, which saw filmmakers attempting to turn Richard Roundtree’s titular character into a black James Bond (a notion that provides one of the latest film’s funniest lines). Also in 1973, Shaft became a bi-weekly series of made-for-television films on CBS, and while Roundtree returned, the violence and and tone were watered town for television. Shaft was cancelled after one season. 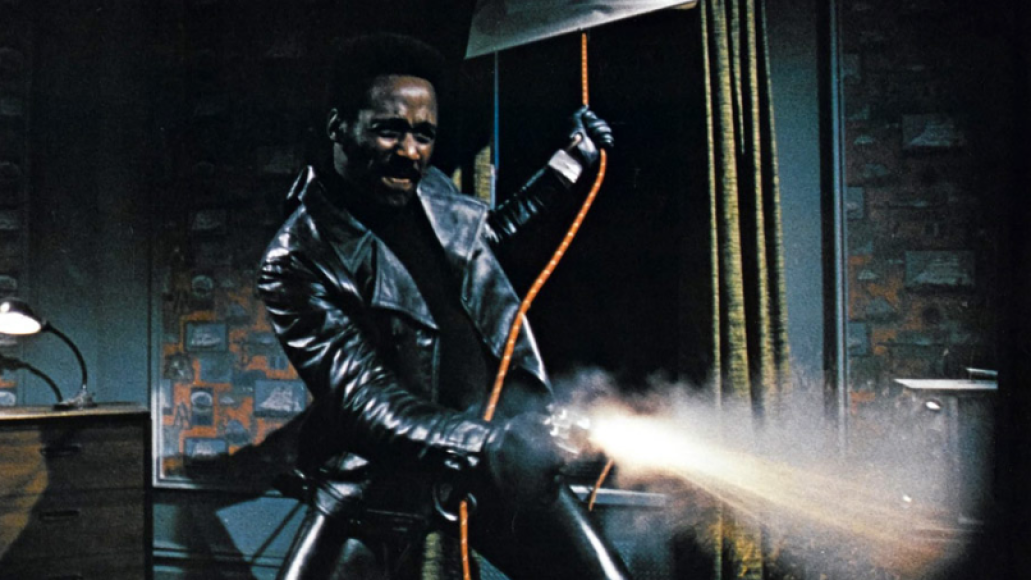 In the summer of 2000, the late John Singleton brought the character back to the big screen, but this time it was Jackson as John Shaft’s nephew John Shaft II. In that chapter, Shaft works for the NYPD and is tasked with taking down a privileged rich kid who literally gets away with murder. It was Singleton at his most playful, delivering an entertaining action thriller driven by Jackson’s chummy performance.

The latest film in the Shaft franchise, meanwhile, plays like a send-up of the series. Granted, the original films were never lacking in humor, and Shaft always had the right quip at the right moment. But the winking slapstick humor makes Shaft feel less like a follow-up and more like a parody … although, perhaps that’s the point.

Who’s The Cat That Won’t Cop Out When There’s Danger All About? For fans of ‘70s crime films and blaxploitation, hearing that opening high hat, those bass notes, and that wah-wah guitar is a lot like hearing John Williams’ theme for Superman. It doesn’t matter what’s happening; the music takes over, and the cool sets in. And rest assured, when Jackson’s onscreen, the film comes alive. He has the attitude, exclaims “motherfucker” an appropriate number of times, and exudes the natural charm that has endeared him to audiences for over 30 years.

The problem then is that what’s around him is decidedly not cool. Screenwriters Alex Barnow and Kenya Barris both come from television comedy, and take a broad approach that’s on full display throughout, with moments that verge on pausing for a laugh from the live studio audience. Director Tim Story, who’s likewise known for comedy (depending on how you perceive his two Fantastic Four films), only embellishes that feeling. They wind up turning Shaft into a straight-up studio comedy, as opposed to any kind of a police drama.

If you’ll recall, Isaac Hayes’ Oscar-winning theme song refers to John Shaft as “the man who would risk his neck for his brother man.” That’s not exactly the case here, mostly because the film never takes itself seriously enough. Given today’s political climate, particularly in the time of of Black Lives Matter, a return to form would have been more appropriate than ever. Instead, Shaft is given a decidedly campy facelift with zero style or substance. In a sense, Shaft is now Giuliani’s New York City: safe, brightly lit, and sterilized.

He’s A Complicated Man: Outside of issues of race, there’s a missed opportunity in Shaft to reach a middle ground between generations and outdated modes of thought, which is staggering given that the film plays with three different incarnations of the titular hero.

New to the scene is Usher’s John Shaft Jr.; adorned in a plaid shirt from Gap, skinny ties, skinnier jeans, and retro-styled Nike Killshots, he’s the picture of the millennial stereotype, living in his exposed brick apartment decorated with a Lord of the Rings poster. Jackson’s Shaft, however, comes from less enlightened times, and holds some outdated beliefs on masculinity, race, and the battle of the sexes. Unsurprisingly, most of the film’s laughs draw from Jackson’s exasperation with Usher’s more politically correct ideals.

But here’s the thing: While the interplay between the two actors is often funny, Jackson’s character rarely appears to learn anything from his son. Throughout the entire film, Jackson berates Usher for being less of a man, particularly in his lack of motivation to get laid. While Usher inevitably ends up taking a cue from his pops, the only lesson the elder Shaft takes away is that he needs to apologize to women when he’s wrong (and only sometimes, at that). Oh, and he also learns how to use a computer. How novel. 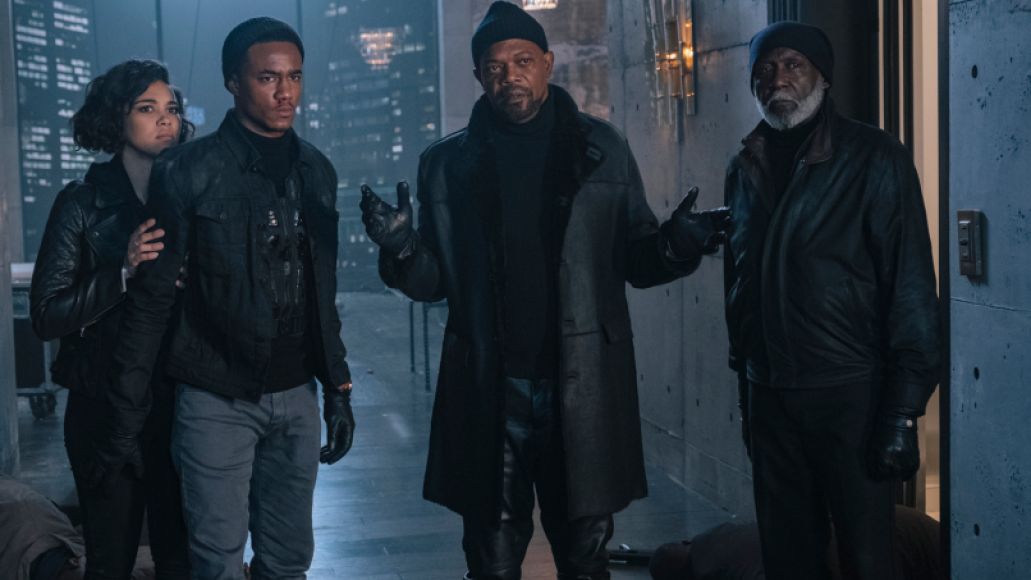 Meanwhile, although the eldest Shaft’s outdated thoughts on homosexuality are generally accurate for a character of his age — despite Roundtree’s Shaft counting on a queer bartender as an informant and friend in the 1971 original — they’re solely played for laughs. Even worse, they set up an empty lesson on tolerance that never meaningfully pays off.

In fairness, not every film is obligated to make a social statement. Yet Shaft is clearly trying to make one about “kids today,” and it winds up being misguided, one-dimensional, and awash in stereotypes. At its best, it’s little more than a cursory commentary on the ideological differences between Boomers and millennials, one left as an afterthought to the sophomoric humor at hand.

They Say This Cat Shaft Is A Bad Motha– There’s a real sense of joy in seeing three generations of the Shaft family, clad in black turtlenecks and leather, swinging through the plate-glass windows of a New York City high-rise with guns blazing. Similarly, watching the Shaft men swagger their way through traffic in matching trenchcoats is also a real delight. The issue is that it’s all posturing, and their actions feel meaningless given the generic proceedings and their even more generic class of villains, all of which feel stripped from ‘80s and ‘90s direct-to-video actioners.

Can We Dig It? Maybe a little bit. Fans of Shaft, both the series and the character, will undoubtedly get some big laughs whenever the film plays on series tropes and calls back to the previous entries. What’s more, Samuel L. Jackson is charming and magnetic per usual, as is Regina Hall in conflict with him. Yet this Shaft plays more like a slapstick studio comedy than the fifth feature-length entry in a series of crime films.

While that can be entertaining at times, Shaft mostly reads as an oddly sexless, convoluted, and downright dull continuation. It’s as if the creators are afraid to take the character seriously in an age of ironic detachment. It’s a missed opportunity, particularly at the chance to comment on how being a “complicated man” has evolved since 1971, and how the world has never simply been black and white. Oh, well.